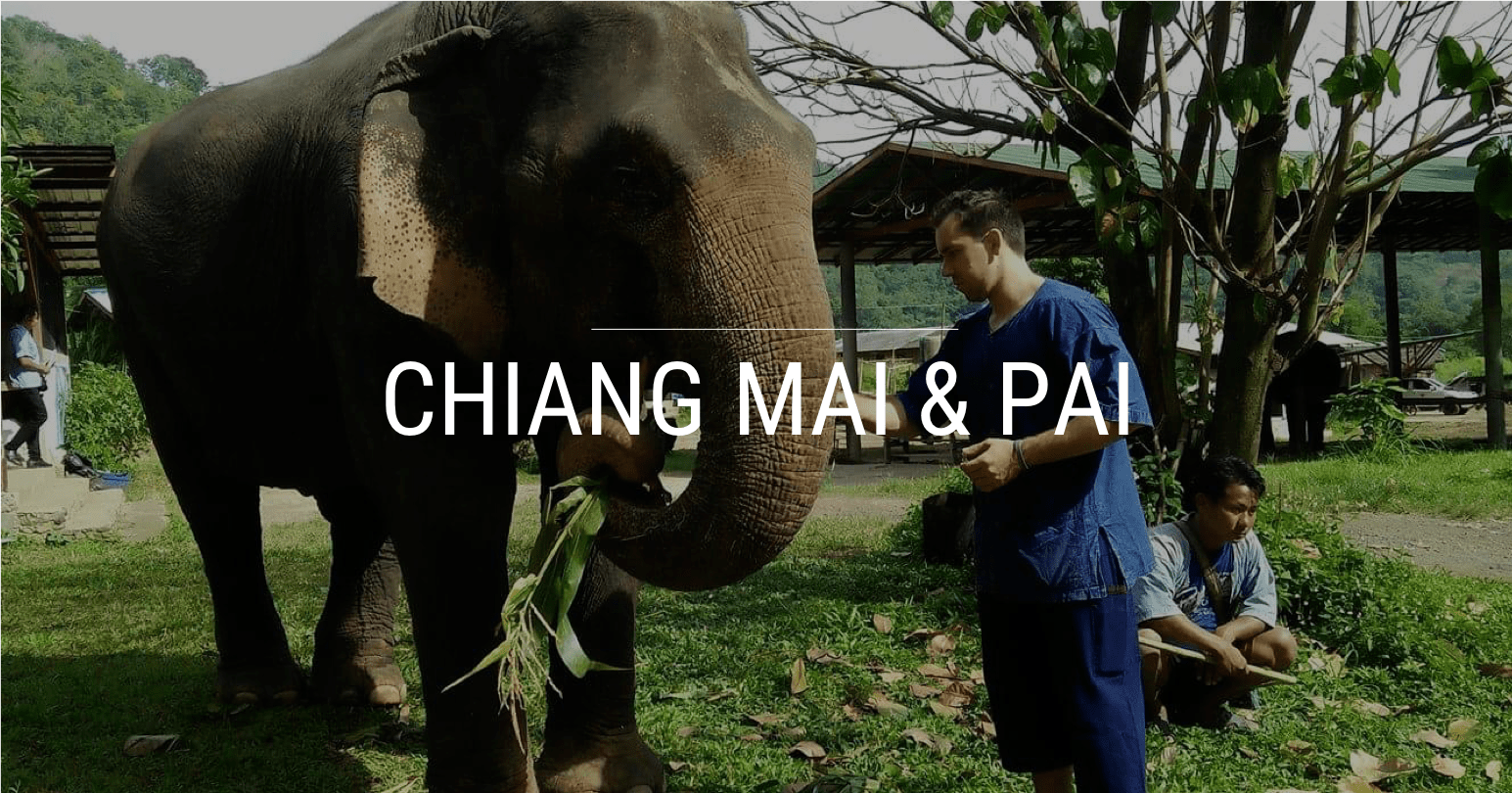 | 🇹🇭| Although slightly less visited than Bangkok and Phuket, the mountains and lush countryside of northern Thailand attract millions of visitors every year. For me, this region had (unacceptably) slipped through the cracks since moving to Southeast Asia in 2012. I was pumped to finally make it happen.

My buddy Rob and I flew in to Chiang Mai from Singapore via Bangkok. A good friend of ours owns a condo near the Wat Santitham Temple and generously offered it to us for a couple nights. It was a great setup.

The next morning, we grabbed breakfast at Cafe de Thaan Aoan and set out to rent motorbikes. We were gearing up for a three-hour trip through the mountains to Pai. After settling on $10/day and jumping through the rest of the required hoops, we were on our way.

Just outside of town, we were flagged down by a road side “police man.” We pulled over and, after a review our information, were told that we did not have the appropriate drivers’ licenses and needed to pay a 1,000 baht (roughly $35) fine. I think three years earlier I would have caved right away and paid it, but having been around Southeast Asia shenanigans for a few years I decided to push back a bit. Over the course of a 3-4 minute broken English argument, the conversation quickly swayed in our favor, to the point where we explicitly told him we were not paying anything and began getting back on our bikes to leave. Funny enough, he didn’t chase us at all. I think he and his buddy were running some kind of hoax and determined that there were easier fish to fry.

Of course, when coming face to face with the law in a foreign country it’s important to be as attentive and respectful as possible. However, particularly in developing countries, these types of situations are common and can be avoided. If you believe you are being scammed or a bribed, I’ve learned that an effective tactic is to get as many nearby people involved as possible. In addition to putting a lot more pressure on the scammer, it is likely that someone in the vicinity will understand what’s happening and be able to straighten things out. The overwhelming majority of people in this world are well-intentioned and won’t let bullshit like this take place.

With that episode in the rear-view mirror (literally and figuratively), we continued north happy to have confirmed that the travel Gods were in our corner. The mountains between Chiang Mai and Pai are beautiful. I wasn’t able to completely enjoy the views because I was focused on not crashing or getting run over by a truck, but the landscape and winding motorway made for an enjoyable drive.

On our way into Pai, we stopped at the Pai Canyon. It is right off the main road and a short hike from the parking area. We had perfect weather and seemed to have arrived after many of the other visitors left. It’s fun to walk on the narrow, elevated dirt paths. But be careful – one wrong step could mean a long fall. I’m told this is a great place to see the sunset. 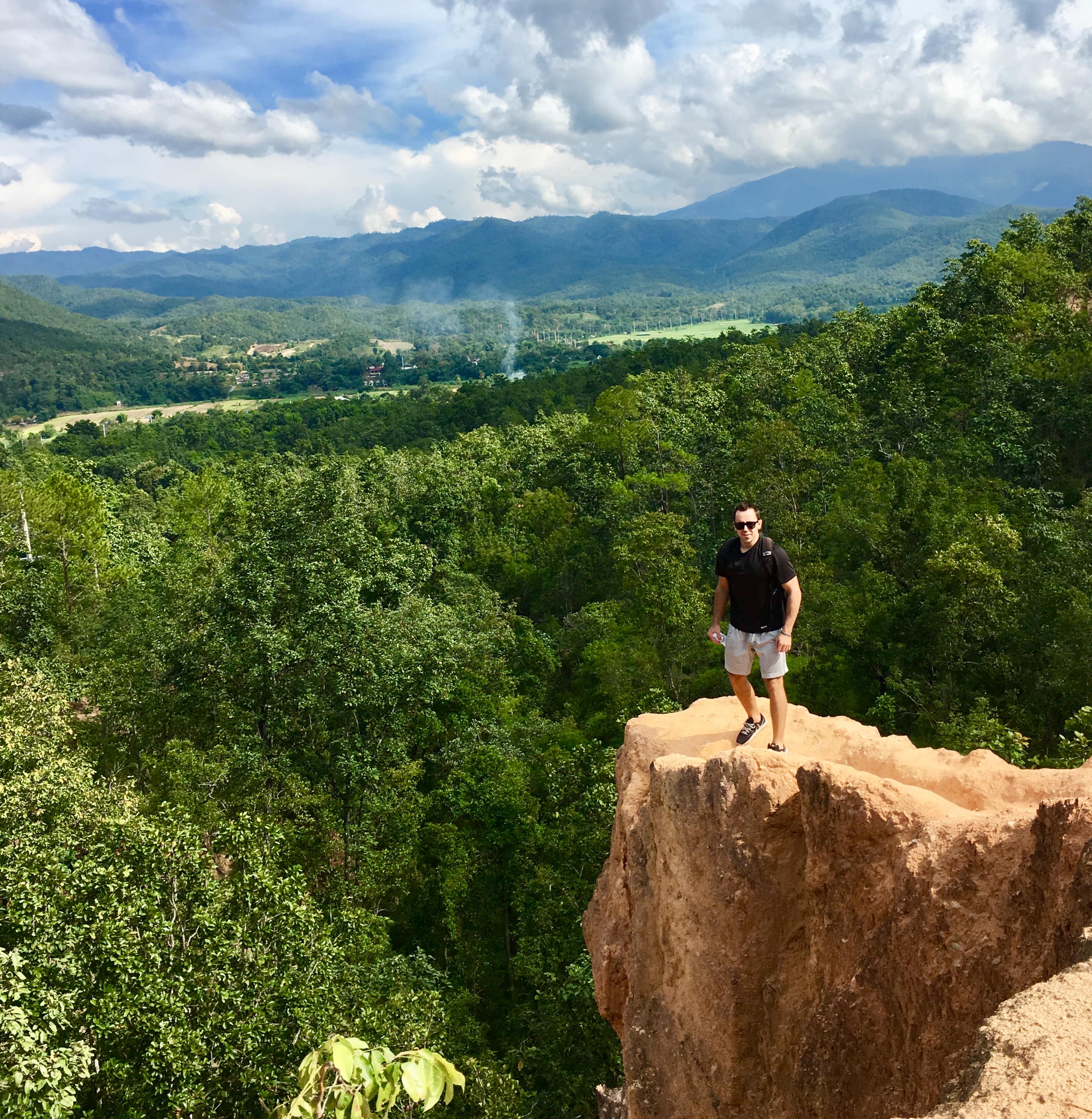 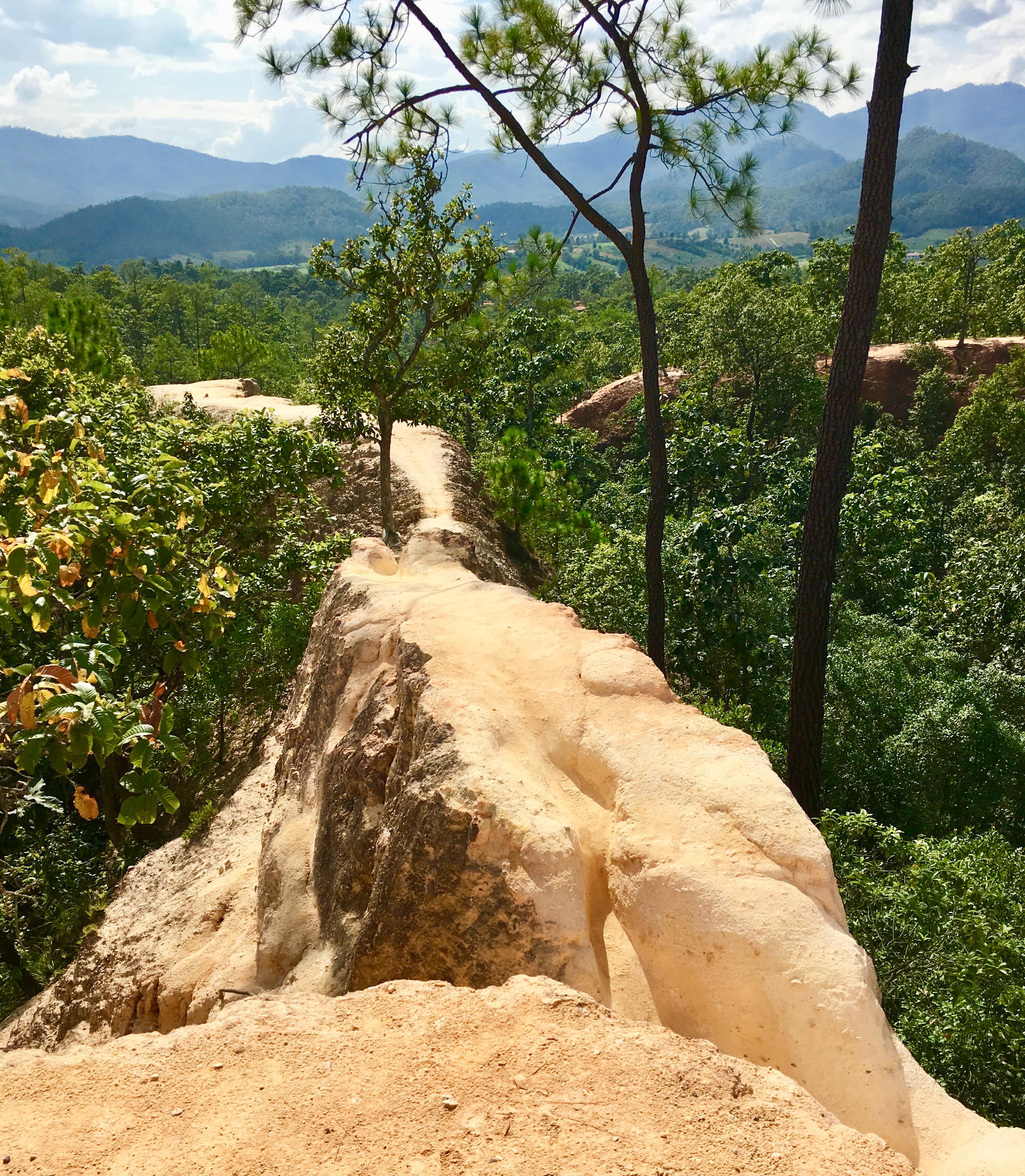 From there, we went to the Pai Land Split. It’s about a ten-minute drive down a small road. As the story goes, in 2008, a farmer’s land split two meters wide and 11 meters deep from an earthquake. As you can imagine, he was shocked. Since then, the size of the split has continued to expand and evolved into a local attraction. It’s a nice gesture to leave a small donation for the community. 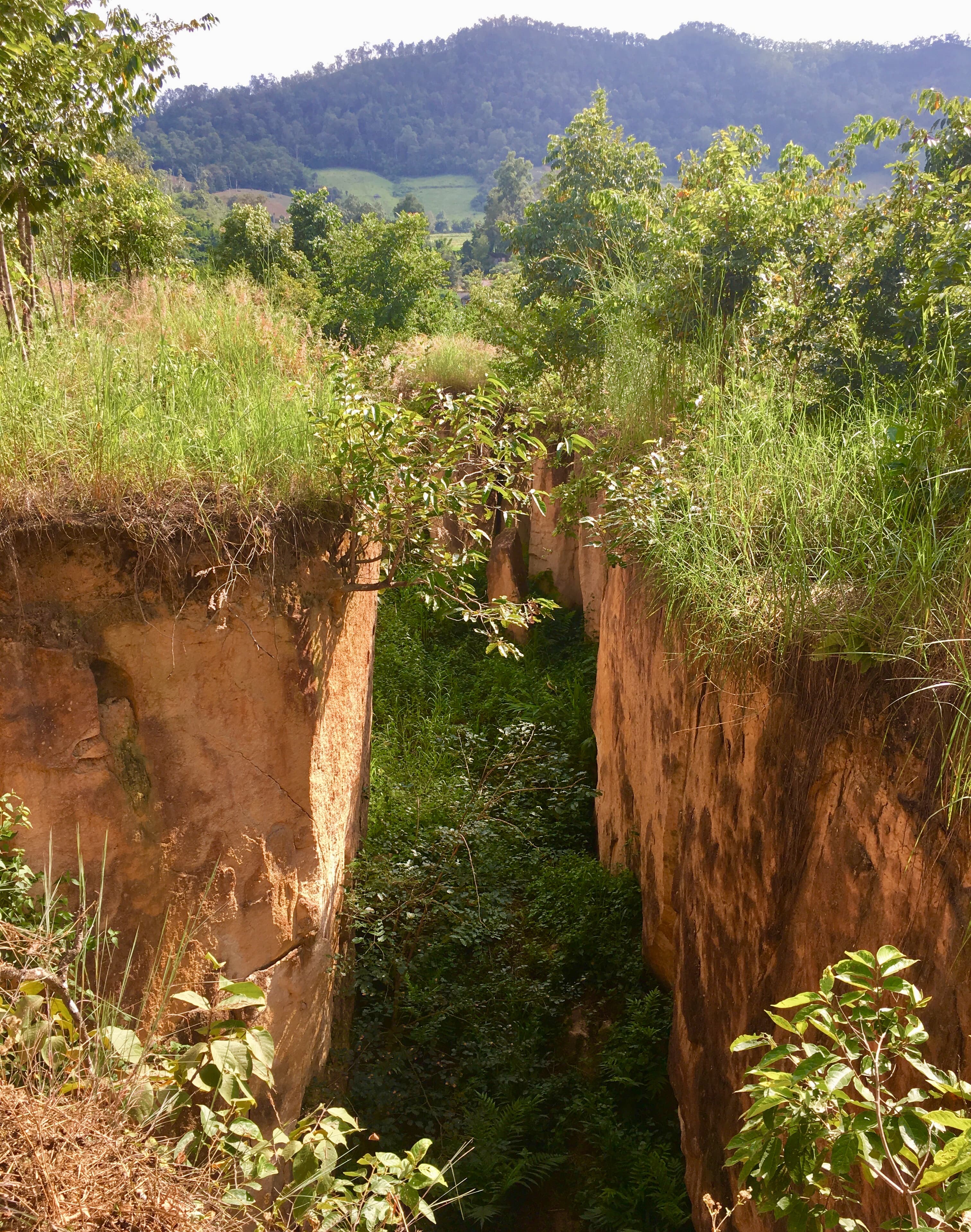 This was our last stop before reaching the town. We spent the afternoon and evening wandering the streets, getting a massage, and enjoying the food. Pai has a relaxed, hipster atmosphere that caters perfectly to Southeast Asia backpackers. Despite it now being home to over 350 guesthouses and hotels, Pai’s rapid growth has been largely authentic and it has maintained a healthy Thai flavor.

We stayed up north at Puripai Villas. It proved to be very comfortable and great value for money. Being out the center of things made for a quieter stay and the breakfast buffet was spot on. Pai itself is relaxing, but Puripai was on another level. I would recommend it if that’s the type of visit you’re looking to have. 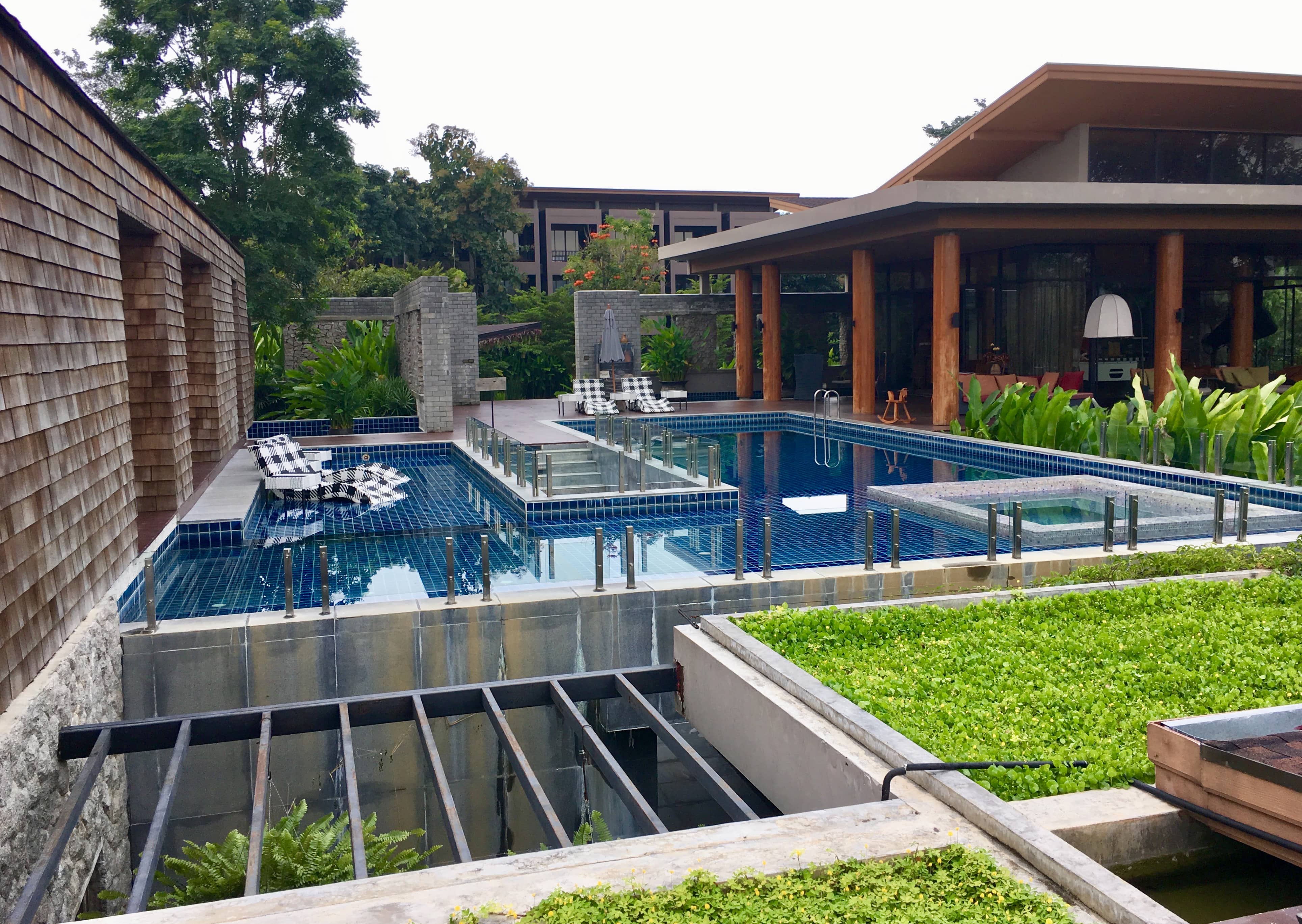 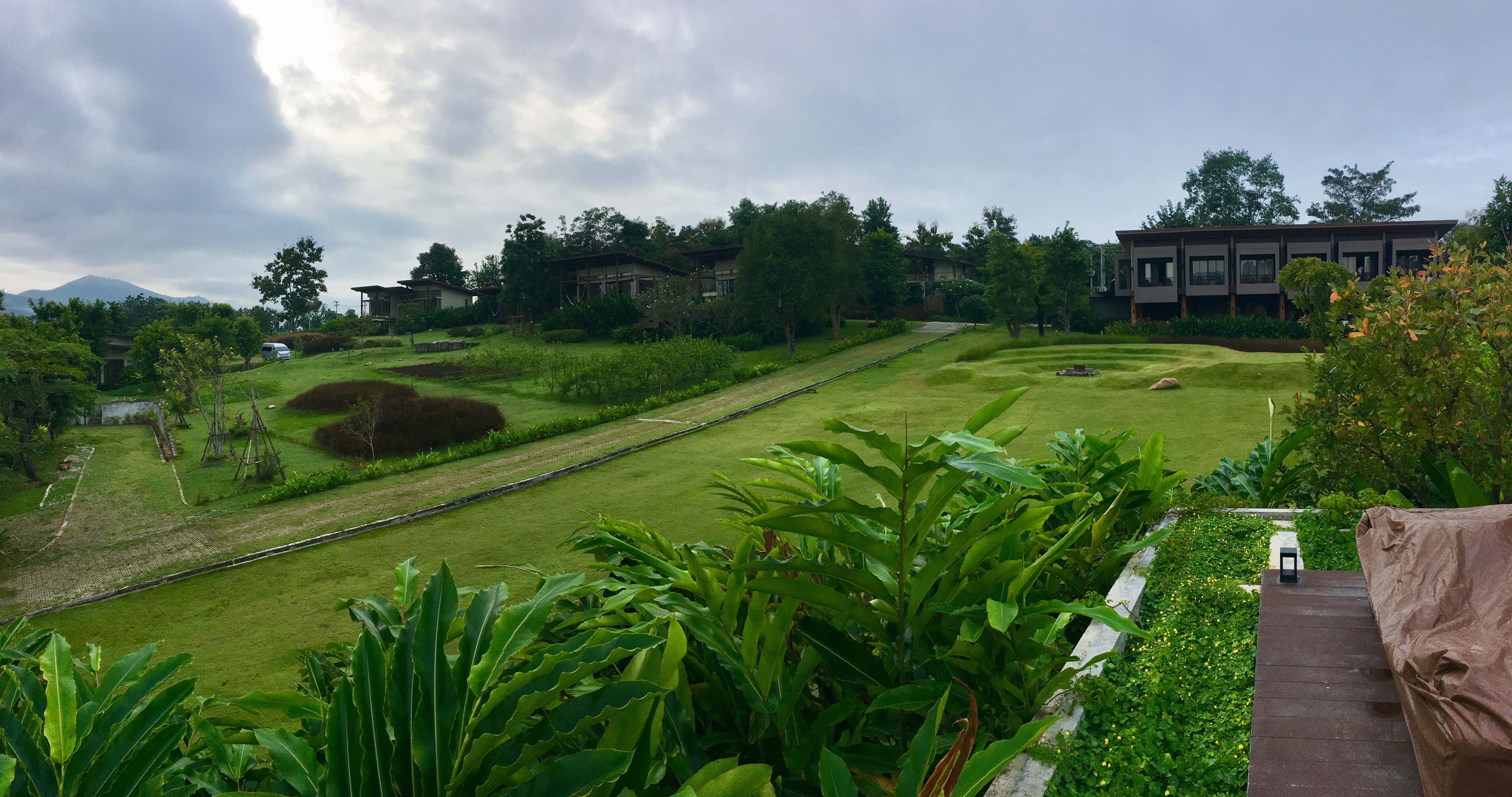 The motorbike adventure continued the next day as we set out for Kuet Chan for our afternoon visit to an elephant sanctuary. Unlike the previous day, the weather was rainy and cold. We had to stop a few times to “layer up.” It was weird doing that in Thailand. 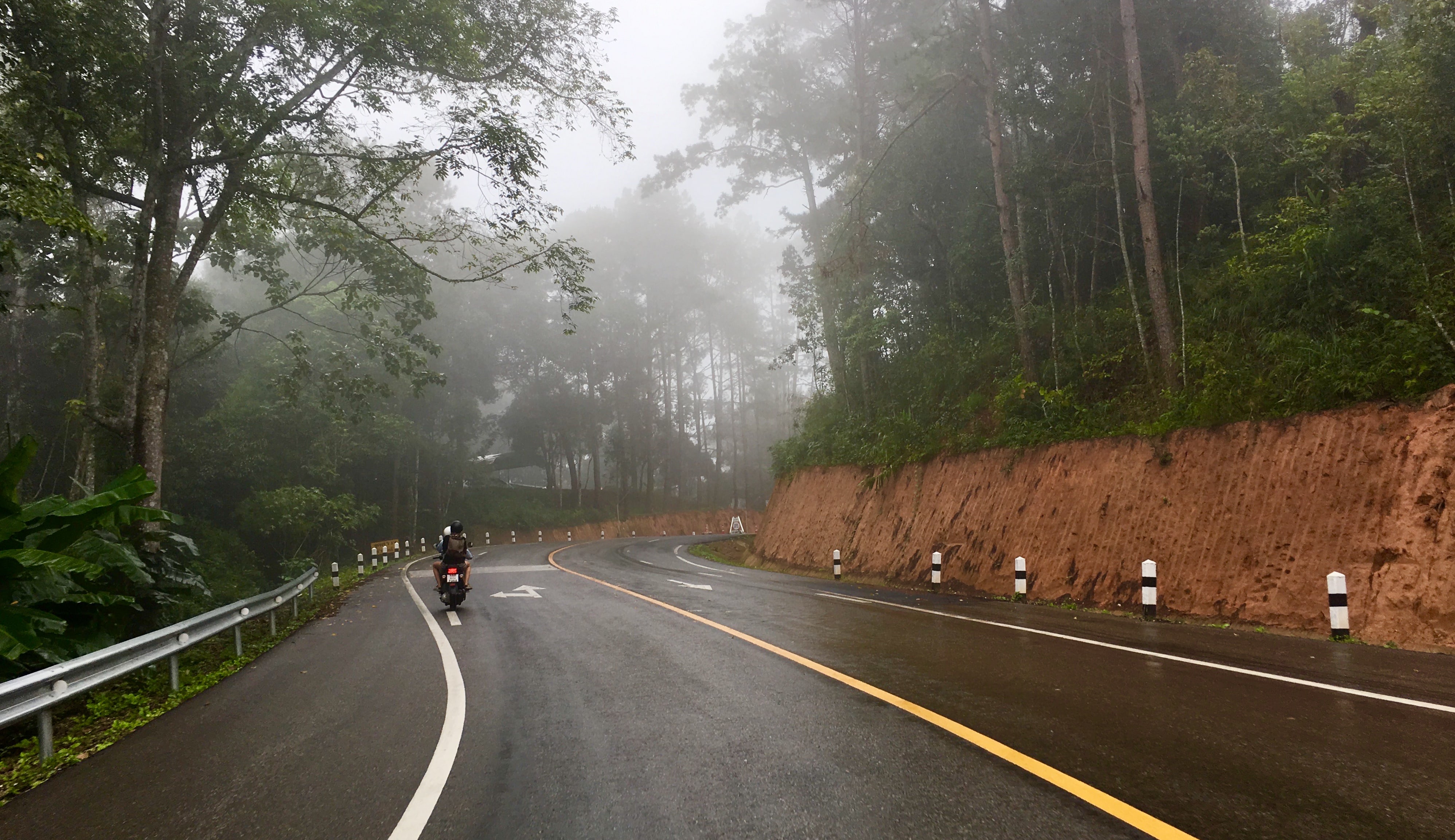 After battling the elements for a few hours, we arrived at the camp. There’s a lot of talk in Southeast Asia about these elephant sanctuaries and which ones treat the animals appropriately. Based on some research and a recommendation from the folks who opened their condo to us in Chiang Mai, we decided to give this one a shot.

After changing into some ugly but practical blue nylon suits, we enjoyed feeding, bathing and learning tons about these amazing mammals. It was a blast! 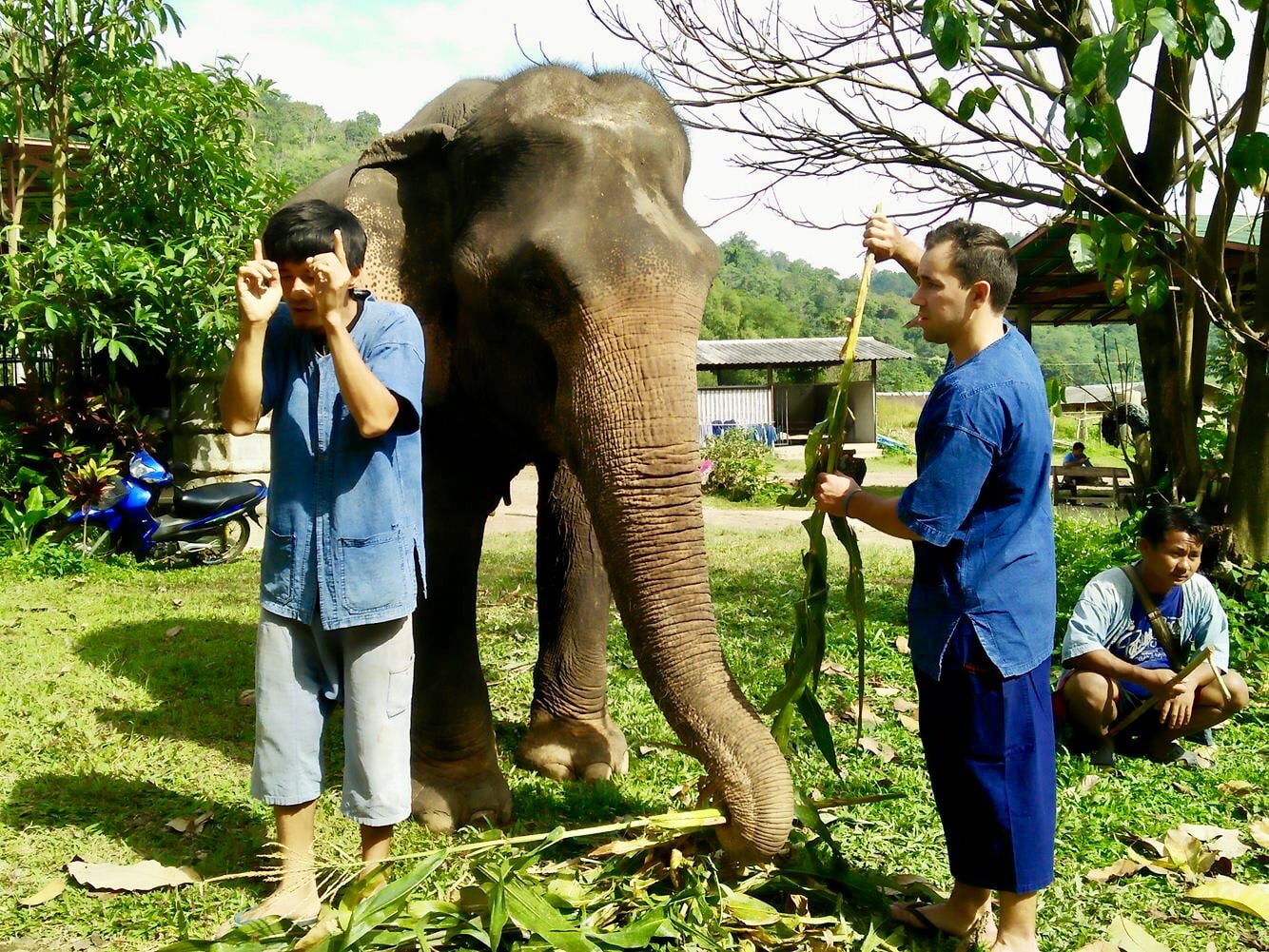 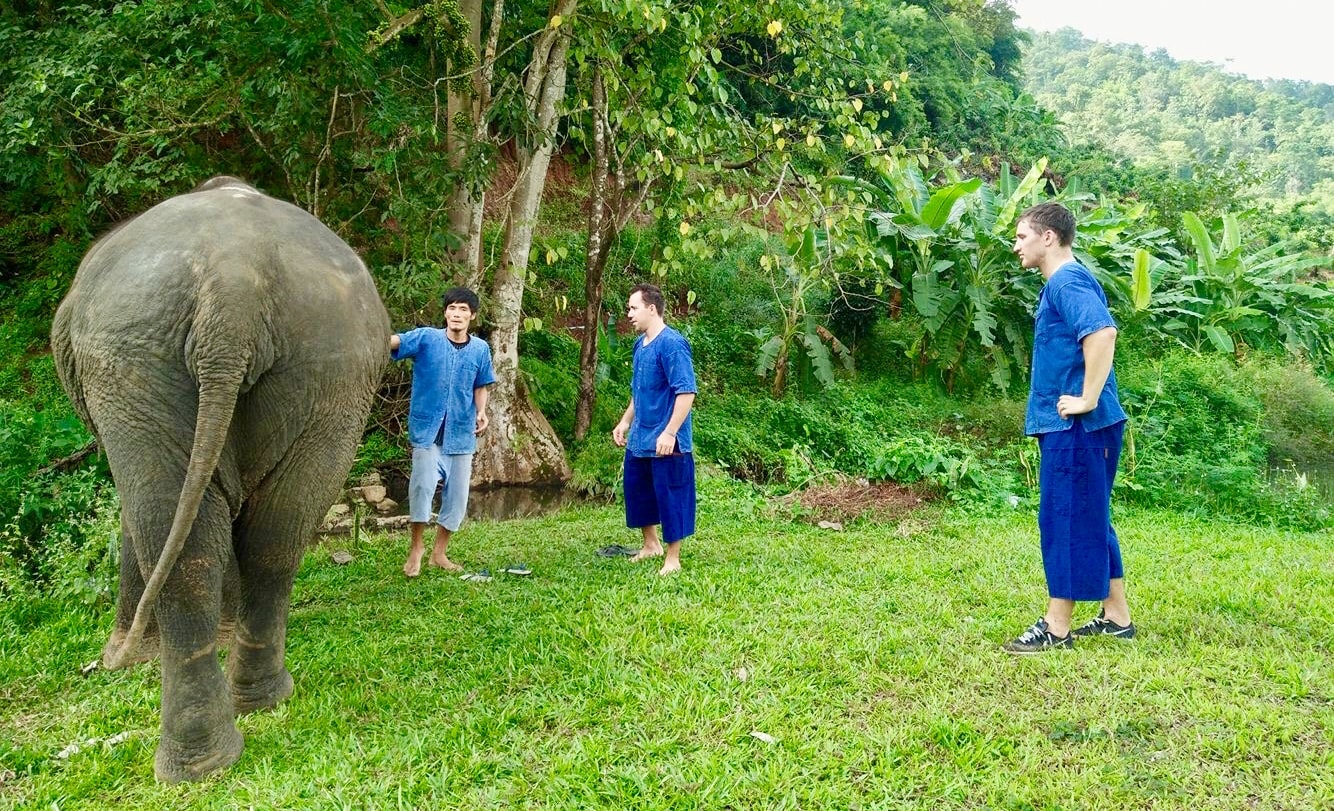 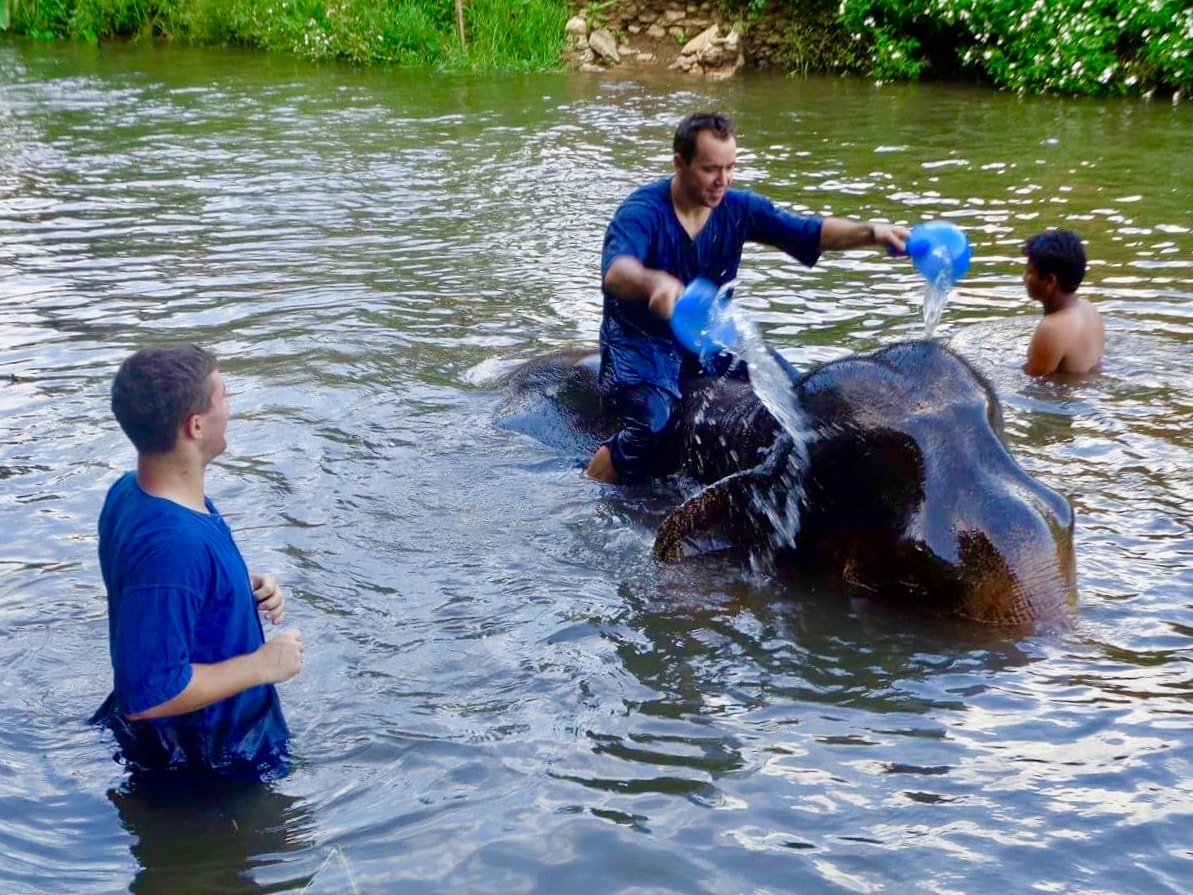 After getting cleaned up, we jumped back on our bikes for the final leg of the trip back to Chiang Mai. Traffic into the city was a pain, but we managed to finagle our way through it. We had dinner at Lemongrass, which was fantastic. Afterwards, we stopped by the Wua Lai Road Night Market, probably the most well-known in the city. Like many of the markets, you can pretty much find anything you need and all prices are negotiable. I bought a new pair of sneakers since mine had been ruined by the mud and river that afternoon. This was an overdue purchase anyways so it was probably good that the elephants got the best of them.

The next morning, we returned the bikes, had another breakfast at Thaan Aoan and went to the airport to catch our flight. I’ve come to really enjoy trips like these – covering a lot of ground but still finding time to relax. I’m spoiled with so many options in the region. I hope to come back soon to visit more of Chiang Mai, and maybe do a similar trip to Chiang Rai. I believe it is a bit further than Pai, but I’m sure it would work. We’ll see!

Have you been to northern Thailand or done a road trip on a motorbike? What did you think?