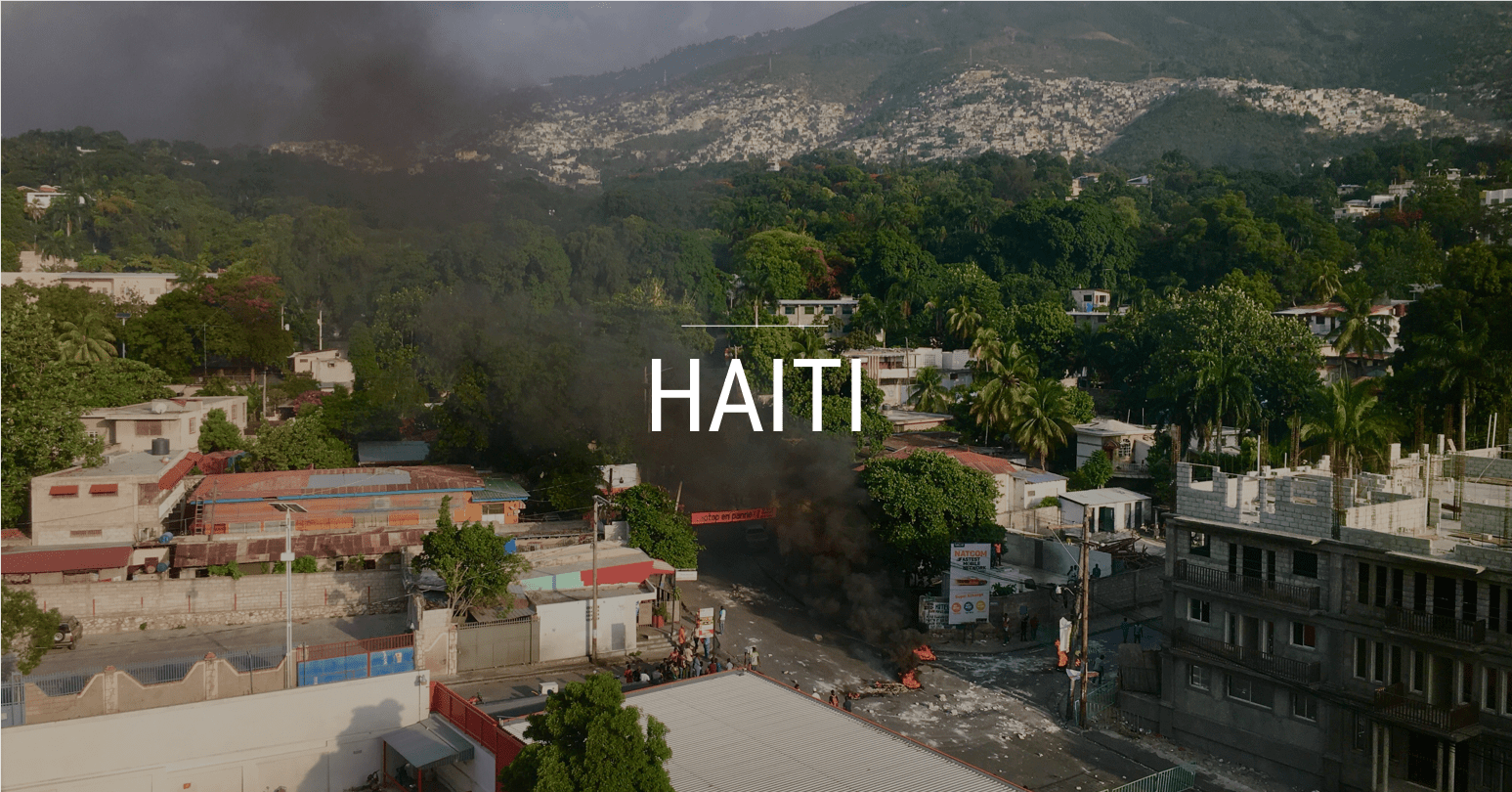 | 🇭🇹| I don’t enjoy spreading negativity, especially when it’s about a country whose people are already victims of unimaginable hardships. That said, I believe my experience in Port-au-Prince and the footage I captured is worth sharing in hopes of providing an example and some general context around what places like this can encounter.

Haiti occupies one third of Hispaniola Island and is the western Hemisphere’s most developing nation. I arrived the Port-au-Prince vicinity following an eight-hour bus ride from Santo Domingo. After we twice failed to enter the city center due to two blocked roads, our bus retreated to a parking where we were told that the streets were jammed because locals were rioting in response to Brazil losing 2-0 to Mexico in the Round of 16 World Cup game. Eager to get off the bus, my Southeast Asia ‘traffic = motorbike’ rational took over and I, against the advisement of our guide, said goodbye to my buddy Paul (who I had met on the bus that day) and flagged down a local motorbike driver for a ride to the Marriott.

“I might be able to get you there,” he said.

He nodded and I hopped on the back. A few minutes later, we arrived at our first intersection. The entire area was up in flames. There were several burning tires and a mine field of large rocks prohibiting cars from passing. The truck in front of us attempted to gun it through the mess. Midway, two men from opposite sides of the road, faces covered with black bandanas, stepped into the street and pelted the truck with rocks. One went through the back window. My driver immediately veered down a side alley and tilted his head back toward me.

“Sorry, sir. We can’t go through that intersection.”

We navigated more than a dozen similar scenarios en route to the hotel. I began questioning whether the skirmishes were indeed related to the World Cup but, given the situation, wasn’t in a position to dedicate much head space to it. The driver, who I later learned was named Joseph, did an incredible job. At one point we had rocks thrown over top of us from one side of the street to the other. We were later encircled by more than 20 men while getting gas from a road-side ‘vendor,’ an episode that felt very untimely. After a 45-minute ride, we arrived the hotel intact at about 6:30pm. The security guard opened the gate and I brought Joseph inside, giving him a big hug and meaningful tip for his effort. It was a whirlwind welcome to the city. 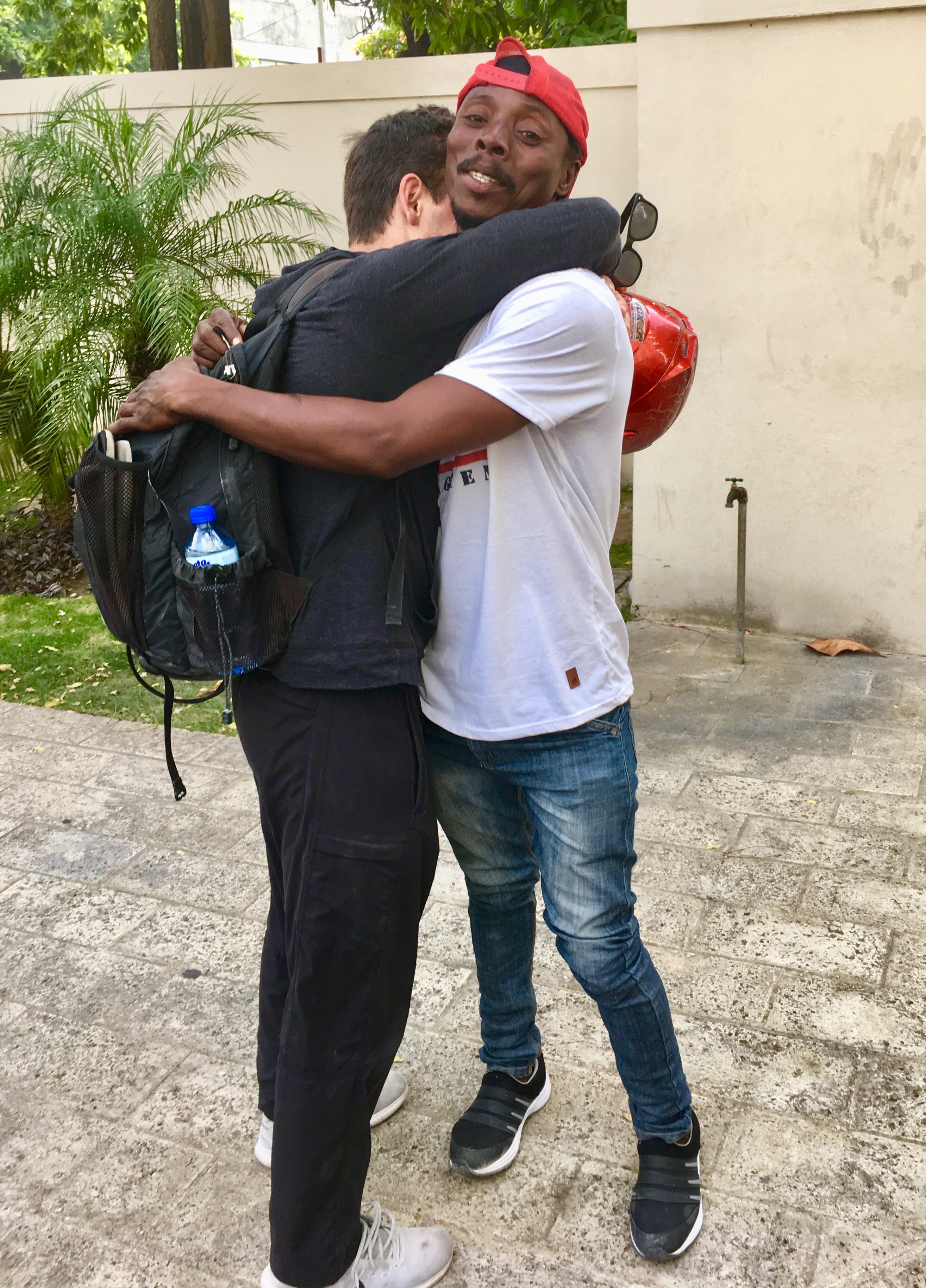 While checking in to my room, I learned that the public unrest broke out after the Haitian Government declared a nation-wide spike in fuel prices in order to remain compliant with an IMF restructuring demand. It had been announced approximately an hour before our bus arrived and was ordered to take effect at midnight. This made much more sense than the World Cup game story and also explained why Joseph was anxious to fill up his bike. From the 7th floor of the hotel, I captured several videos of the surrounding area. At 11pm, I received a text message from Paul saying that he and many others were still on the bus and had no way to leave. They slept there that night. Looking back, if I would have waited on the bus and gotten word that the problems were linked to political matters and not a soccer game, I likely would not have left either and been stuck.

The following day, demonstrations continued leading to all major airlines cancelling their PAP flights. I remained inside the hotel from dawn to dusk. The situation became global news.

A la carte restaurant meals were deemed unavailable in order for the hotel to closely manage its food supply. The police and a special forces team secured the property. Dozens of protestors gathered outside the hotel, throwing rocks at cars in the front parking lot and later building a sizable fire near the entrance. Protestors destroyed the Digicel (Haiti’s primary mobile phone carrier) infrastructure knocking out data roaming services and the hotel’s WIFI. I later caught wind that the Haitian Secretary of Defense was hiding out at the Marriott which is what made it a significant target. At one point, while looking out at the crowded gate, all I could think about was the Iranians storming the US Embassy in Argo. I made friends with Stephen, the head of the Haiti police. He was a great guy and promised to keep us safe. 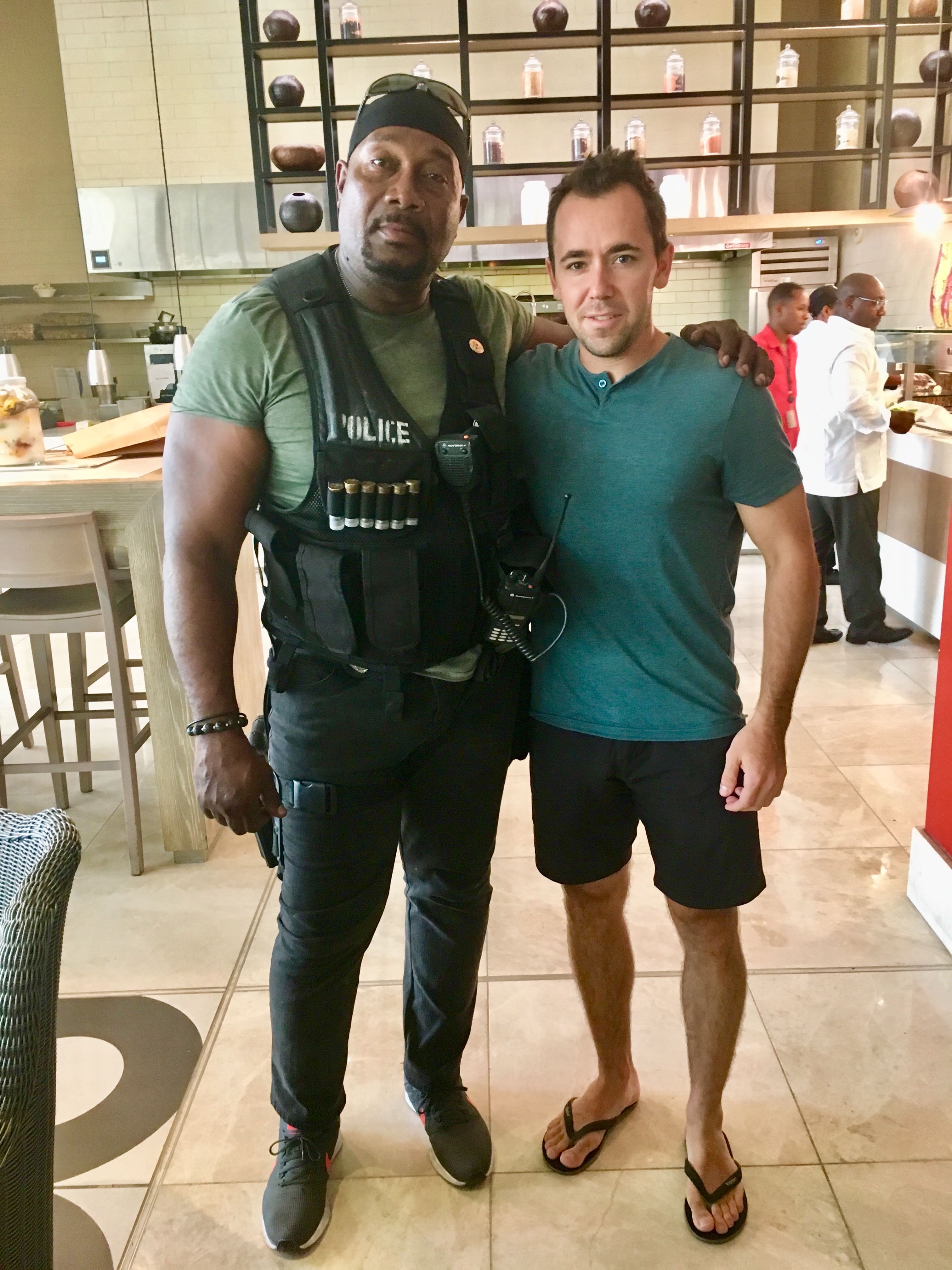 I woke up the next morning, on Sunday, hoping that some tension had eased. We were told that despite their anger, things would potentially calm down as many locals would still respect the religious nature of the day. Having been pushed back 24 hours, I was booked on a 2pm flight to Miami that afternoon. The lack of WIFI sabotaged information flow, but through the hotel’s front desk I learned that the 11am flight to Miami was cancelled. I figured mine would be too. An hour later, I was informed that my flight was surprisingly scheduled to depart on time. I waited until the plane departed Miami and was in the air to PAP before making a run for the airport. Taking a car was still not an option due to the debris in the road, so, after two days inside the hotel, I grudgingly jumped on another motorbike. Following several creative maneuvers down back roads, we made it to the airport. As expected, the terminal was a zoo. My flight departed relatively on time and was the first commercial flight to leave following the protests. As I was boarding the plane, I snapped a photo of an intersection fire just beyond the airport fence. I was grateful to be on my way out. 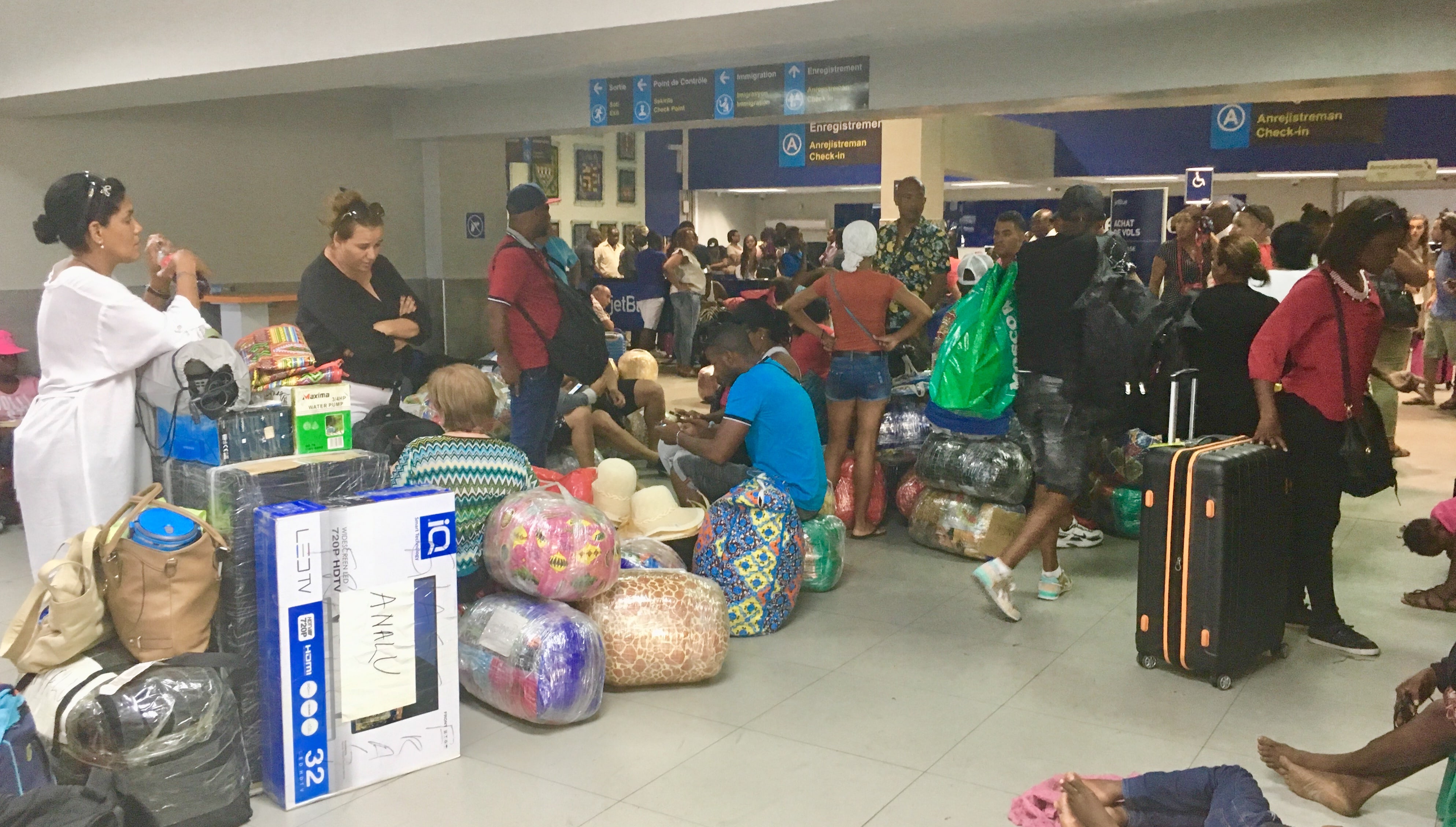 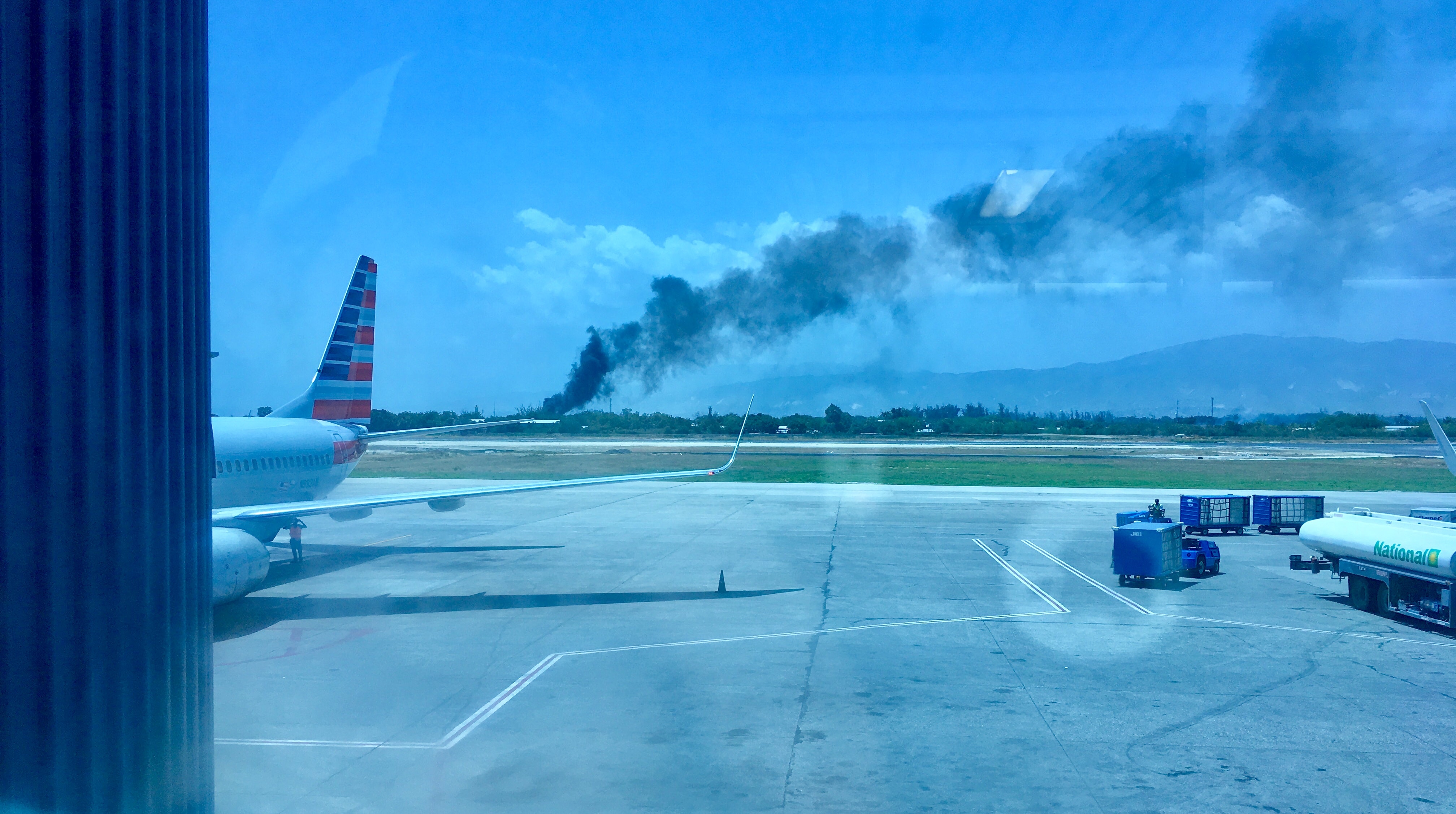 Since returning from this trip and recapping the events, a common response has been, “Well, I guess you’re never going to Haiti again.” Ironically, I think this experience makes me even more keen to revisit. I was a victim of unfortunate timing, something that could happen anywhere. The Haitian people I directly interacted with couldn’t have been nicer, not to mention Joseph who legitimately risked his life to help me. I would be excited and thankful for another chance to visit. I hope I get the opportunity.

Have you been to Haiti? Have you ever encountered political protests? What was your experience?