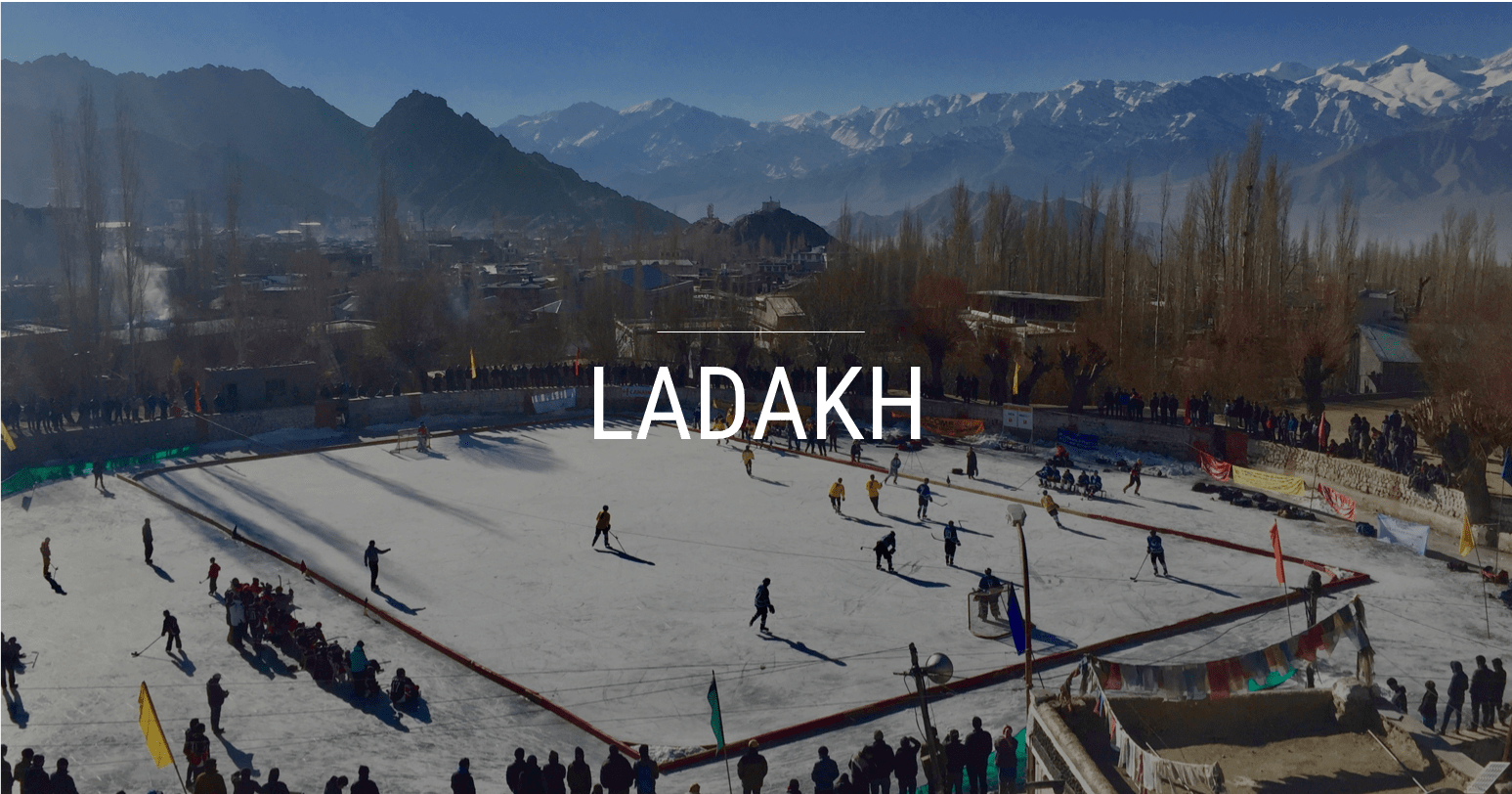 | 🇮🇳| The Ladakh region of northern India sits on top of the world among the towering Himalaya Mountains. It is the most sparsely-populated region of Jammu and Kashmir and home to primarily Buddhists and Muslims of Tibetan descent. Parts of Ladakh are disputed as its eastern border bushes up against the Line of Actual Control (LAC), a demarcation line that separates the Indian and Chinese-controlled territories. It is home to Rangdum, the highest elevated settlement in India – a world away from the Taj Mahal and chaotic streets of Mumbai.

Ladakh is known as the ‘land of high passes’ and famed for its vast beauty and rich culture. For visitors, the most common activities include volunteering, trekking, attending festivals, rafting and motorcycle road trips. Although several of those played a part in my experience, I was drawn primarily by something more unique to the area – Hockey.

For the past decade, a core of New Delhi-based expats have lead adventurers from around the globe to Leh, the picturesque capital of Ladakh, for the opportunity to explore a beautifully isolated region while growing the game of hockey. A recreational tournament takes place every January on a frozen reservoir in the town center. Leh rests at an elevation of 3,500 meters (11,500 feet) making this ‘rink’ among the highest in the world. The local people have come to love the game which has helped fuel the growth of the event year after year. It has become one of the most intriguing and acclaimed hockey trips in Asia.

A key element of the event is the involvement of The Hockey Foundation. Since 2009, they have been making a positive impact on the local community through hockey. They have coached more than 3,000 Ladakhi players and donated nearly 7,000 pieces of equipment. All tournament participants are encouraged to round up old gear and bring it with them to Leh. Much to the dismay of Jet Airways, my group from Singapore brought a total of 290 kilos (640 lbs) in excess hockey gear. When arriving at the Grand Dragon Hotel (the most modern accommodation in town), everyone unloaded what they brought. Given the isolated location, the bulk of equipment was pretty amazing and a great way to meaningfully kick off the event. 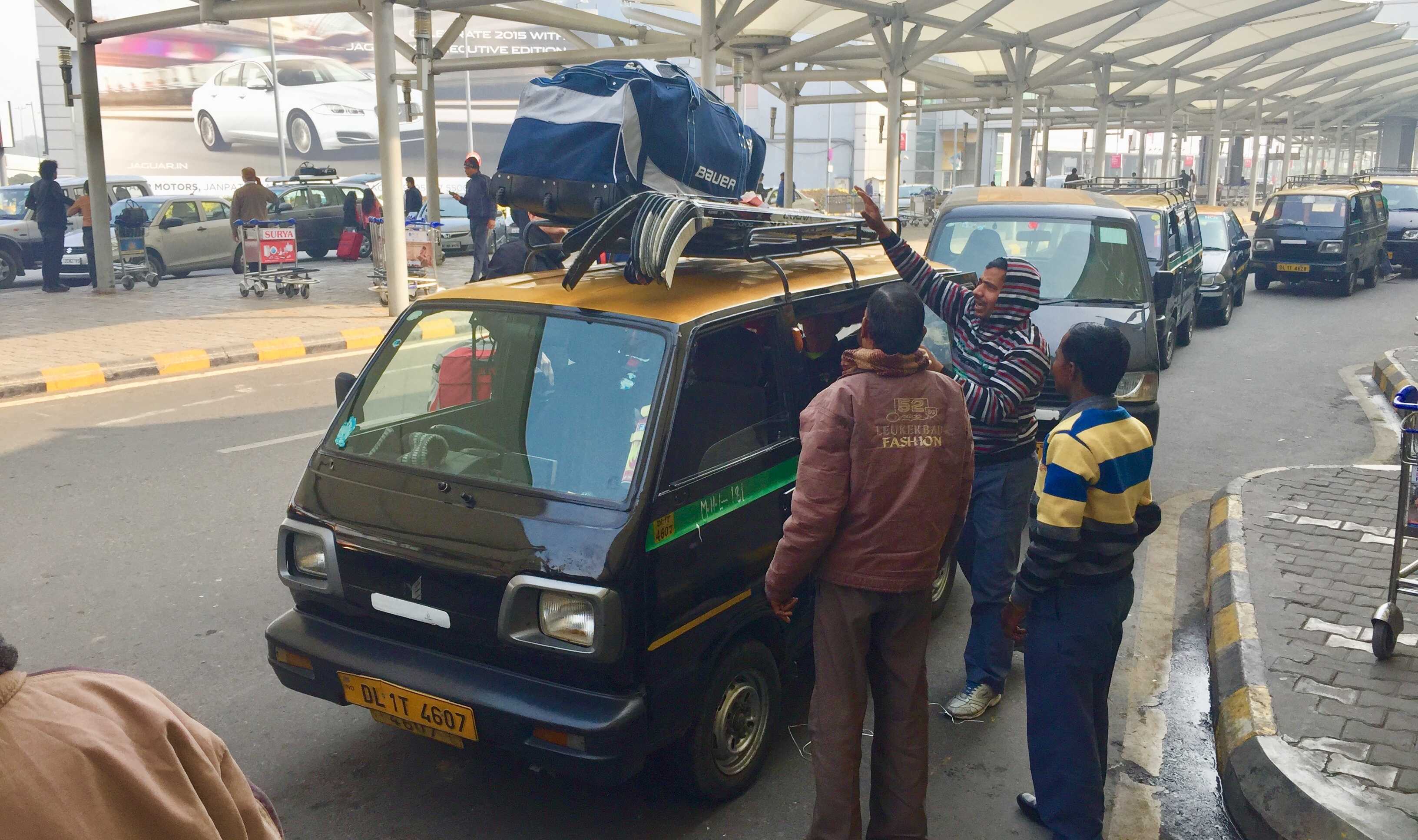 The games began bright and early the following morning. We tried to start as early as possible to avoid the softer ice that comes along with the rising sun. Overall, we lucked out with the weather and had two days of ideal conditions. Having played hockey competitively up through college, I was fortunate to compete in a number of historic settings – such as the University of Michigan’s Yost Arena, Cornell University’s Lynah Rink and the University of Maine’s Alfond Arena. The sellout crowds, ruthless student sections and on-point pep bands combined for remarkable atmospheres and some of my best memories a player. While in Leh, I remember turning to various teammates mid-game and expressing to them that this was right up there at the top of that list.

When exchanging the sellout crowd for 25,000-foot Himalaya Mountains, the student section for spectators in trees and the pep band for Kashmir’s top 40 hits, it gives downtown Ann Arbor some serious competition. This is all before you even consider the intermission green tea and clear January sky. It was as unique as you can imagine. 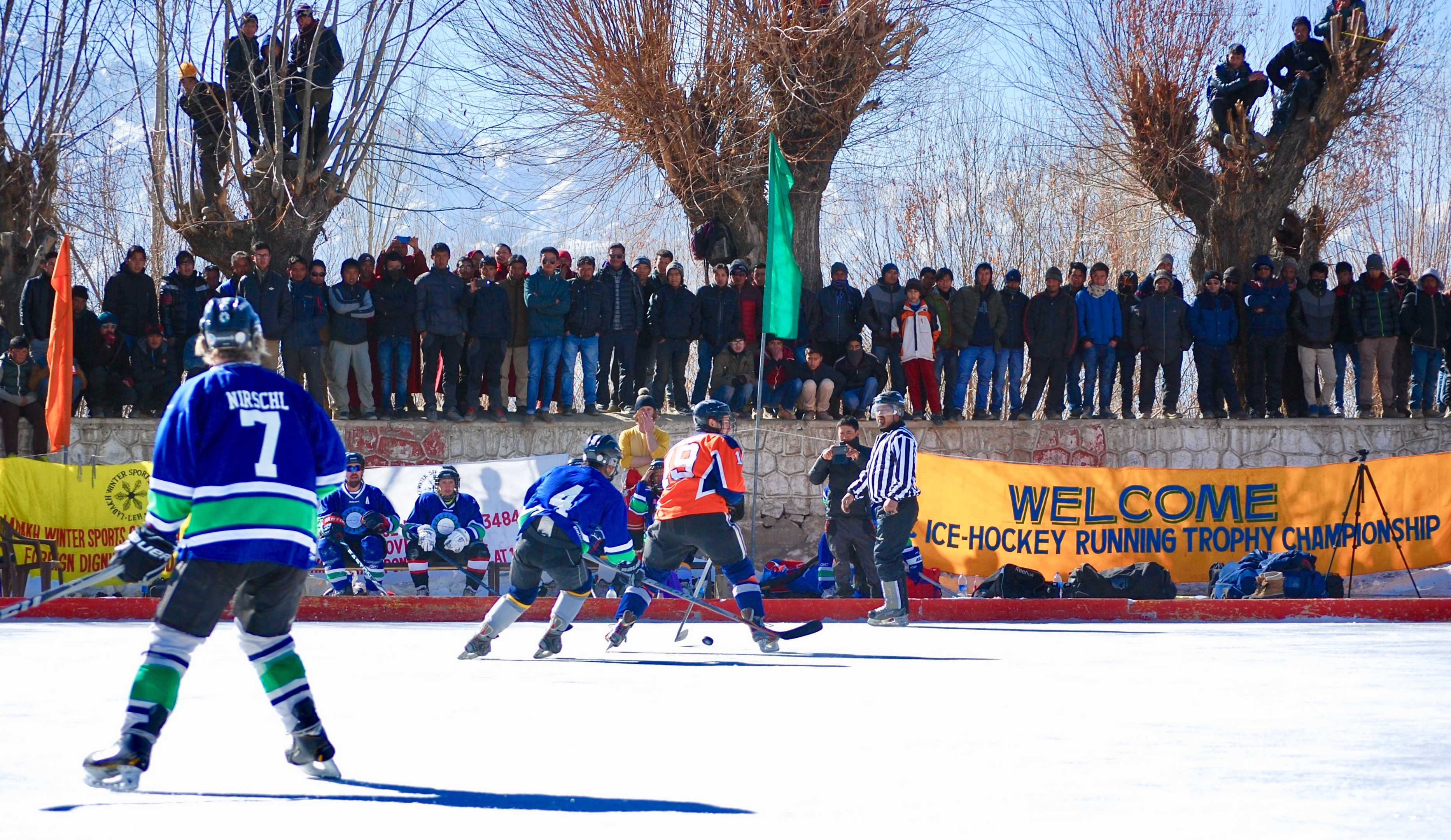 Hockey fans know that the Zamboni is an iconic part of the game. It was first pioneered and developed in 1949 and has become an internationally recognized vehicle. In about ten minutes, a Zamboni can create a fresh ice surface for skaters. Although we managed to get truckloads of extra hockey equipment to northern India, a Zamboni hadn’t made the trip yet. This didn’t faze the Ladakhis and they quickly developed their own system.

The friendly tournament consisted of four teams – one from New Delhi, one from Germany, The Hockey Foundation and our team, which was made up of guys from seven different countries, all of whom were based in Singapore. We played three games per day which was about all my lungs could handle. The boards around the rink were only about six inches high, so the puck often flew out of play. Like the old school pond hockey days, we dug it out of the bushes and continued the game. Our team went on to win by defeating The Hockey Foundation in the Championship game. During the awards ceremony, I was named MVP of the tournament and presented with a plaque from the Chairman of the Ladakh Sports Council.

As any competitive athlete knows, most sports trips consist of nothing but long bus rides, the competition venue, a few restaurants and the hotel. That’s it. There’s no time for anything else. In Leh, however, the experience goes far beyond the rink. The surrounding area is home to dozens of things to do and see, with many of them revolving around the Monasteries. I particularly enjoyed the Leh Monastery, which overlooks the town and can be walked to from the rink, as well as the Thikse Monastery which is about a half hour drive southeast. Spending time exploring these structures provides an unparalleled look into the culture of the local people and their religious beliefs, a central part of everyday life. Hiking up to them often leads to incredible views of the region. 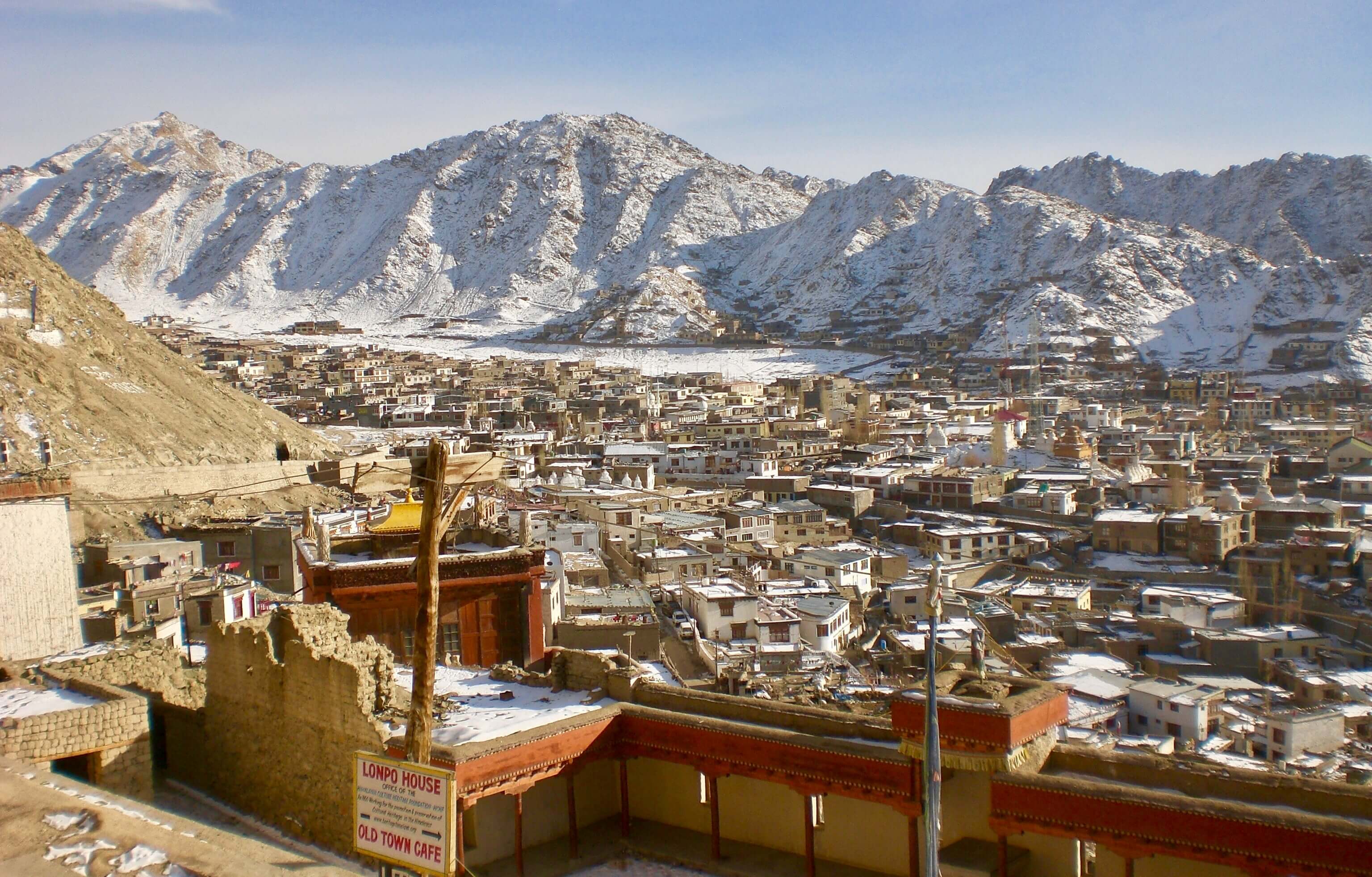 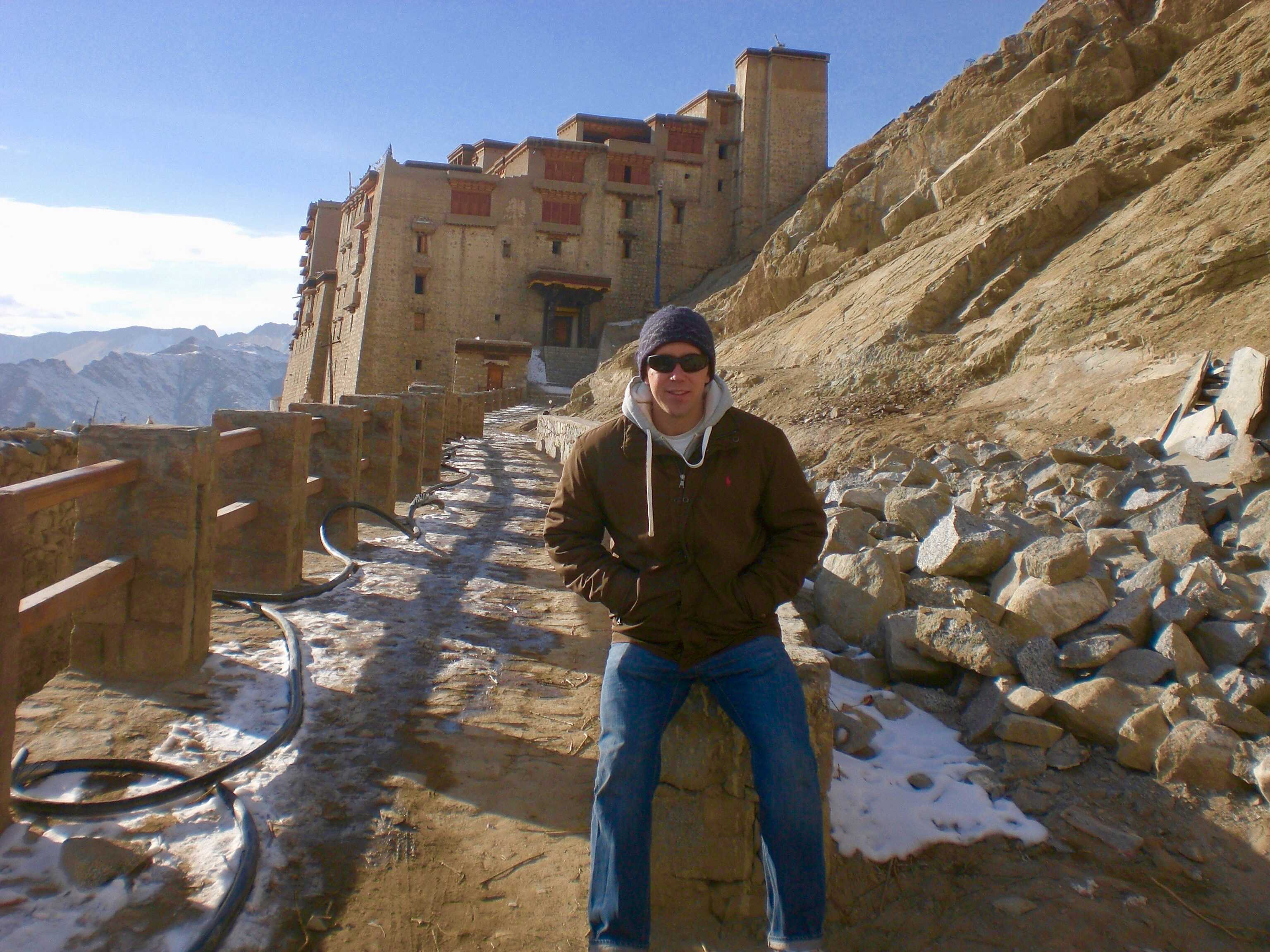 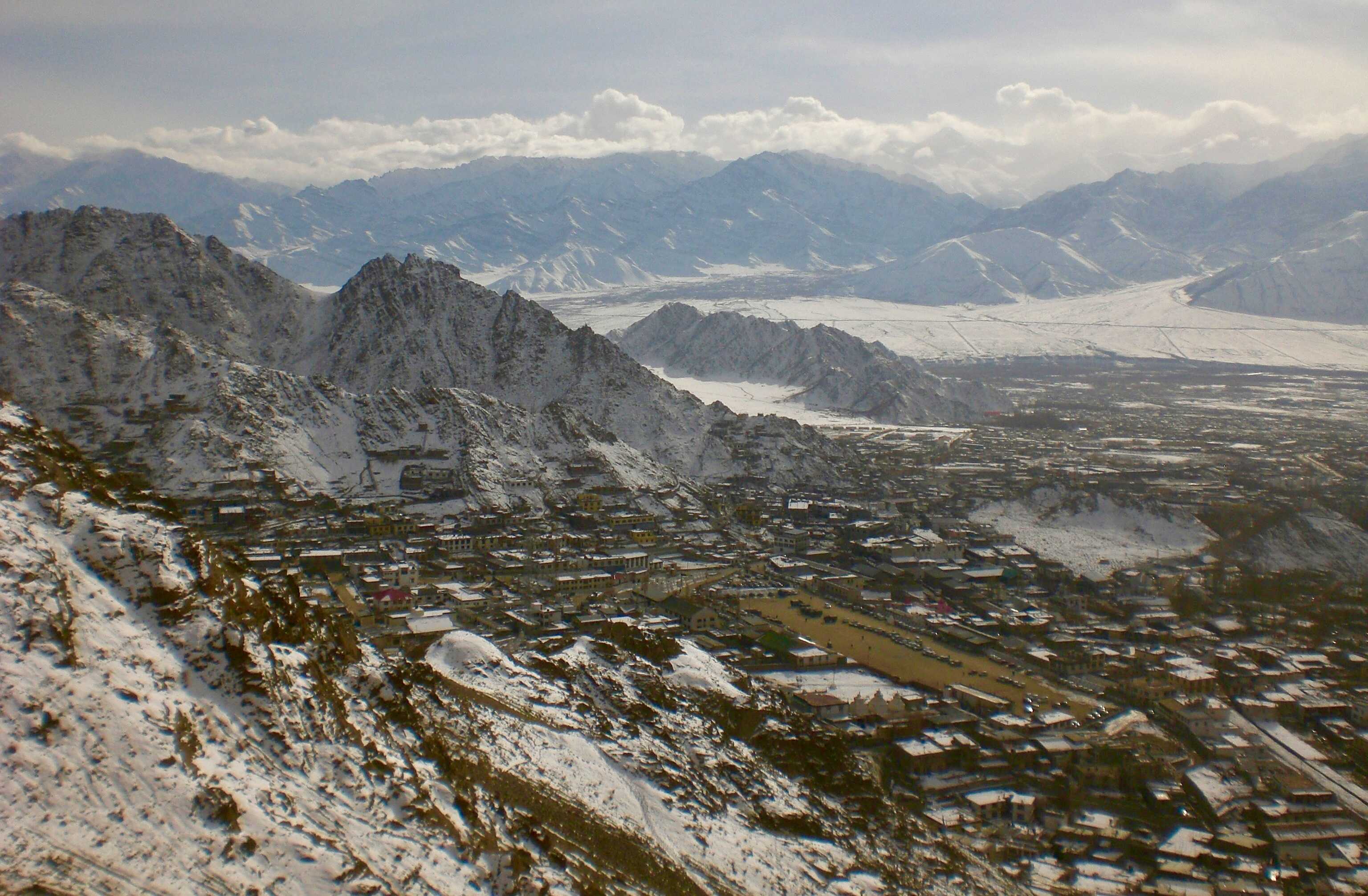 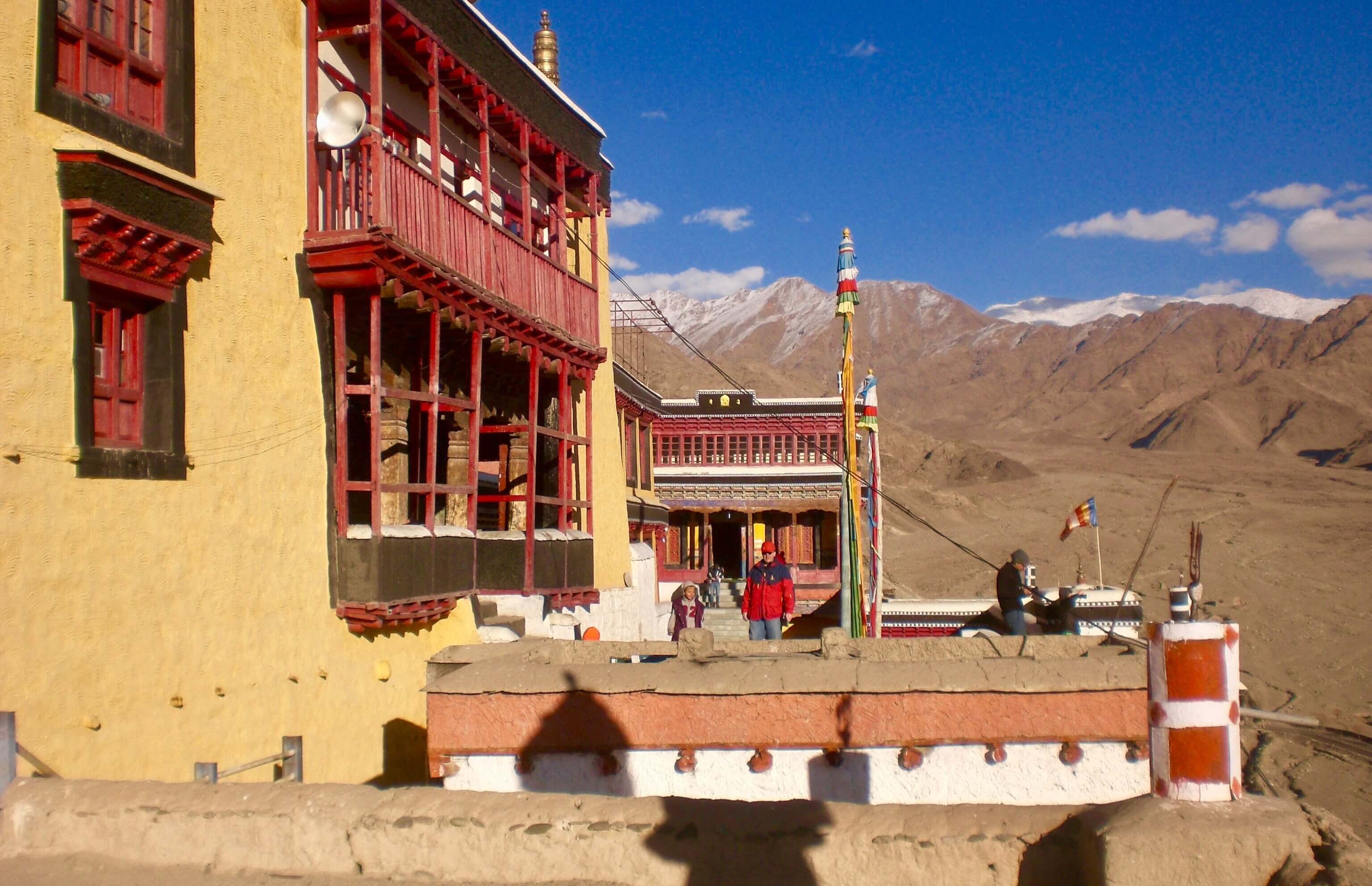 Driving north from Leh leads to the Khardung Pass, the gateway to the Shylok and Nubra Valleys. The road to the 5,600 meter (18,380 foot) summit is labeled the ‘highest motorable road in the world.’ On our last afternoon, some teammates and I hired a driver to go check it out. On the way up, our circa 1975 Indian van was sliding all over the snowy road. Of course, there was not a guard rail to be found. The driver stopped midway up the mountain to put chains on the tires. They helped, but there were still a number of heart-stopping close calls where I thought we were going over the edge. In addition, the huge change in altitude was leaving me dizzy. If you’ve ever had altitude sickness you understand how much it sucks. I usually only get a mild case of it, but jetting up to an altitude higher than Mount Everest’s basecamp in only two hours was enough to do me in. We managed to avoid driving off a cliff and made it to the top of the pass where we spent a few minutes breathing in the extremely thin air and absorbing the stunning views. As one of the signs advised, it wasn’t recommended to stay long so we, much to the approval of my headache, were quickly on our way down to Leh. After a memorable four-hour adventure, I was happy to be back at the Grand Dragon. To date, I have yet to visit a higher elevation. Have you? 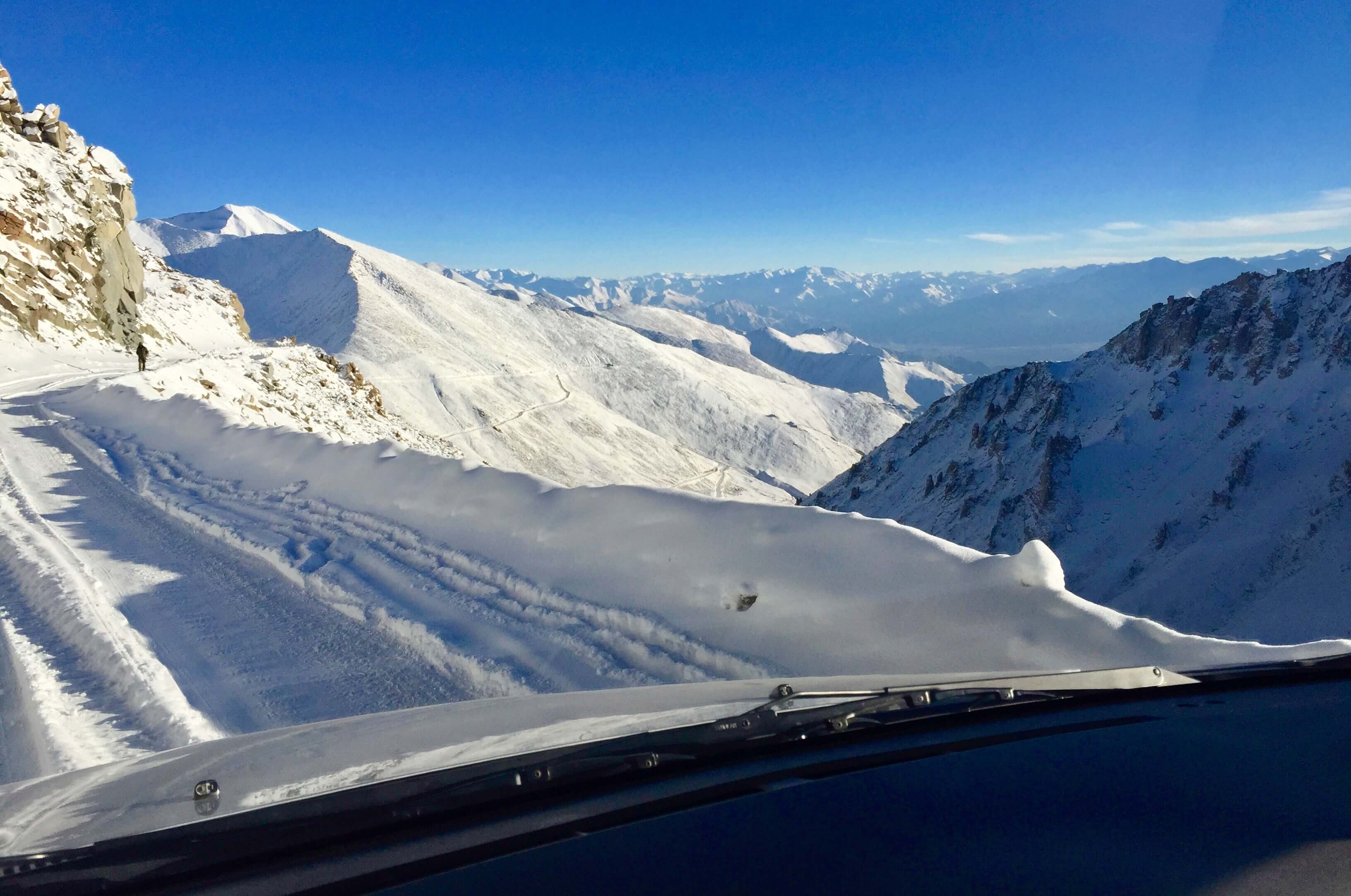 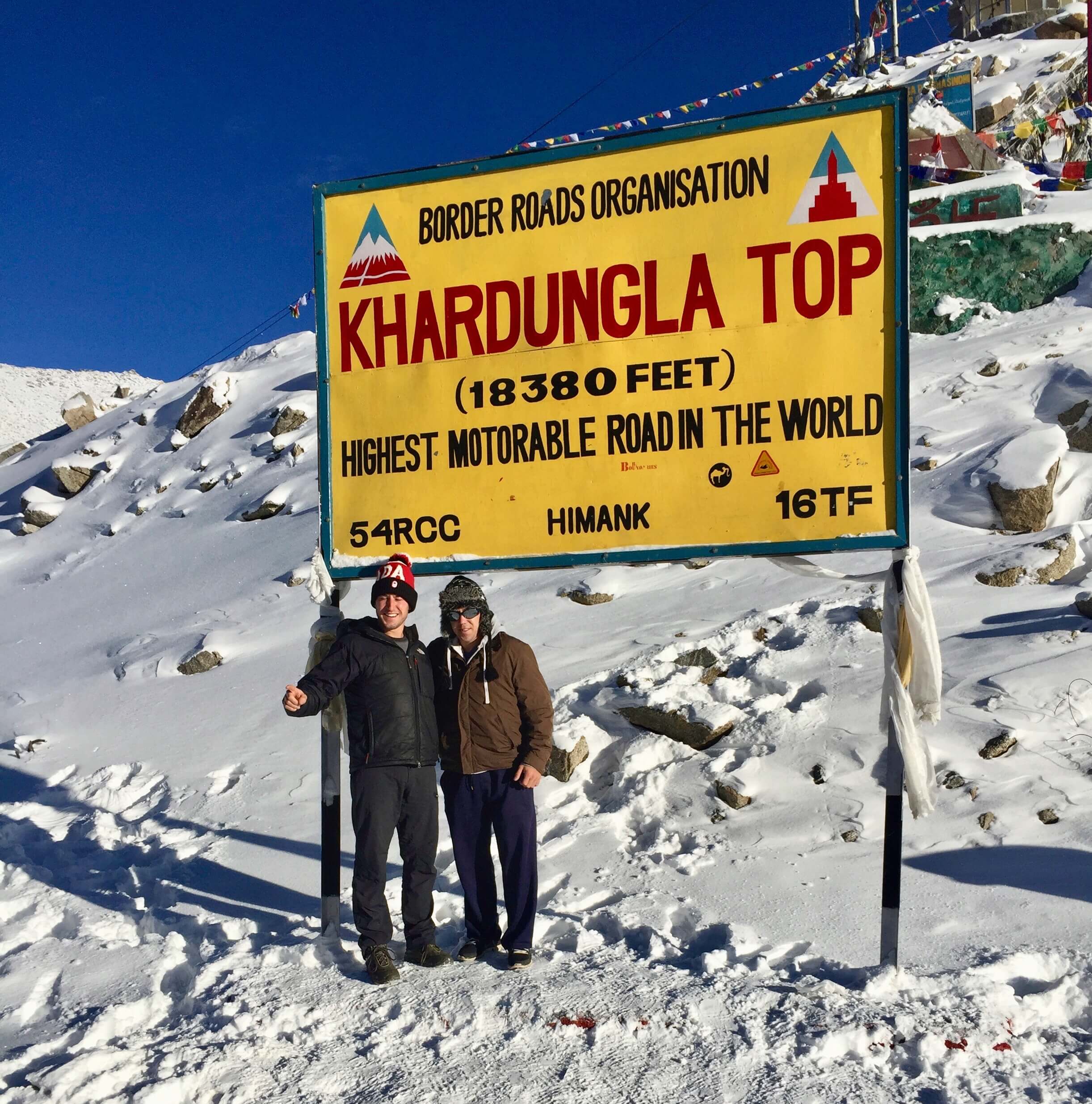 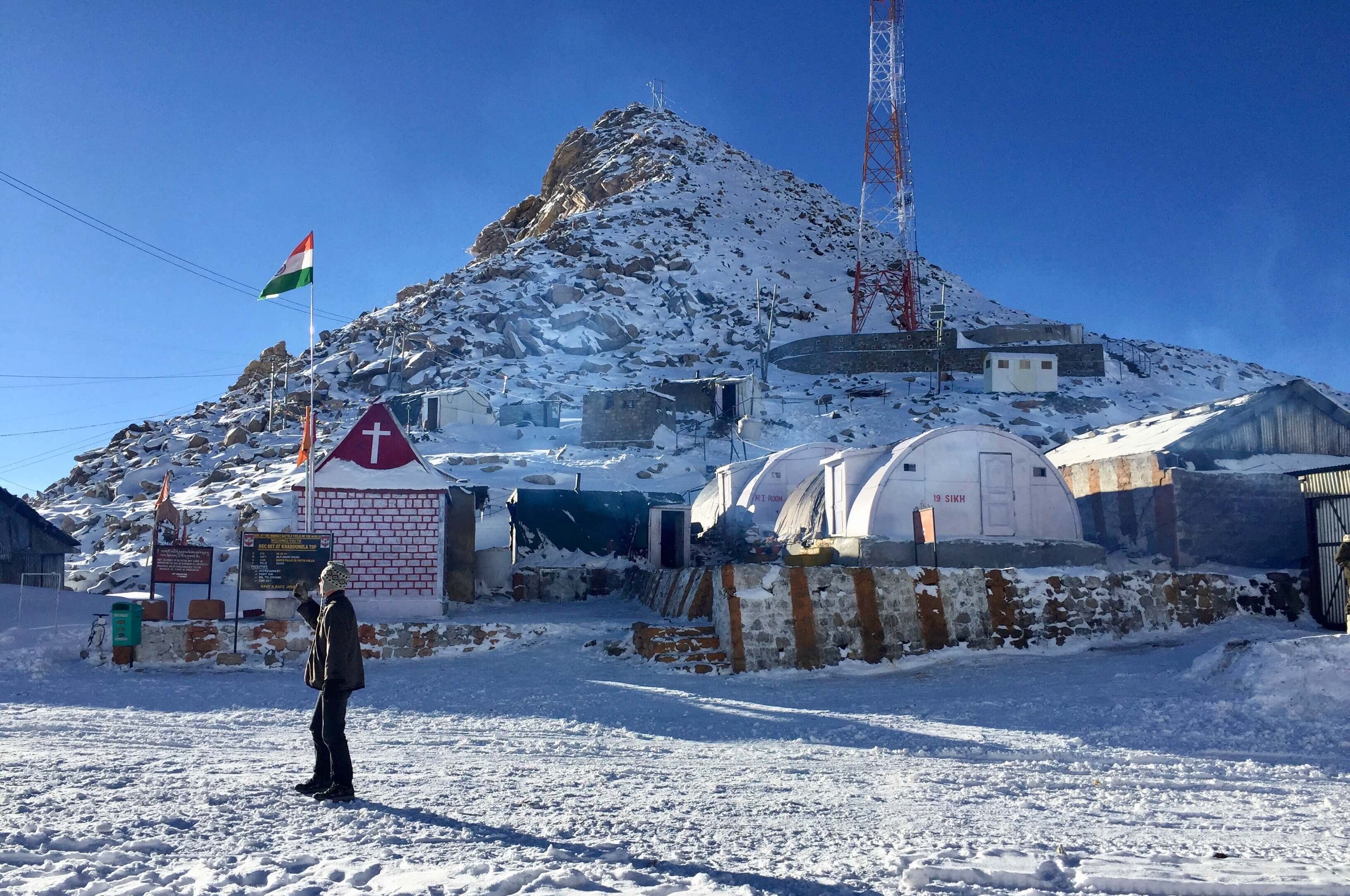 Our visit to Ladakh came to a close the following morning. Again, we lucked out with weather and didn’t have any flight issues. In the wintertime, the only way to travel between Leh and New Delhi is by air – the main road south is closed due to the snow – so if there are any cancellations you’re pretty much stuck. I heard that in years past people were stranded in Leh for several days, which would be inconvenient… or would it?

When reflecting back on this experience, it’s unquestionably one of the best I’ve had. It consisted of so many things I enjoy – unique destination, hockey, philanthropy, great people and a compelling story to tell. I have every reason to believe that the event will continue to take place, so, of course, I would love to do it again. If any of my hockey friends are interested, give me a shout and I’ll get you up to speed on the details. It’s a trip you won’t soon forget.

Have you been to India or anywhere in the Himalayas? What did you think?