| 🇲🇺| Mauritius is a tiny but gorgeous island nation off the eastern coast of Madagascar. It was a bit of a stretch to travel to ‘Africa’ for only a few days, but my radius to new countries from Singapore had ballooned making short getaways increasingly aggressive. Also, Air Asia had just begun flying there from Kuala Lumpur. Although not the most comfortable airline, the price, dates and times were right, so I went for it. Of course, two months after my trip, Air Mauritius began non-stop service from Singapore on the days I wanted. Oh well.

The airport in Mauritius is on the eastern coast of the island. I was staying at a small, local hotel in Flic-en-Flac (great name) in the west. The 45-minute cab ride between the two was pricier than I expected. I paid the equivalent of about US$50. In NYC, that’s fine. But in Africa…? Maybe I got ripped off, but it was convenient. I was solo so unfortunately couldn’t split it with anyone.

I got in just in time for a sunset walk down the beach. It was a nice welcome to the island. 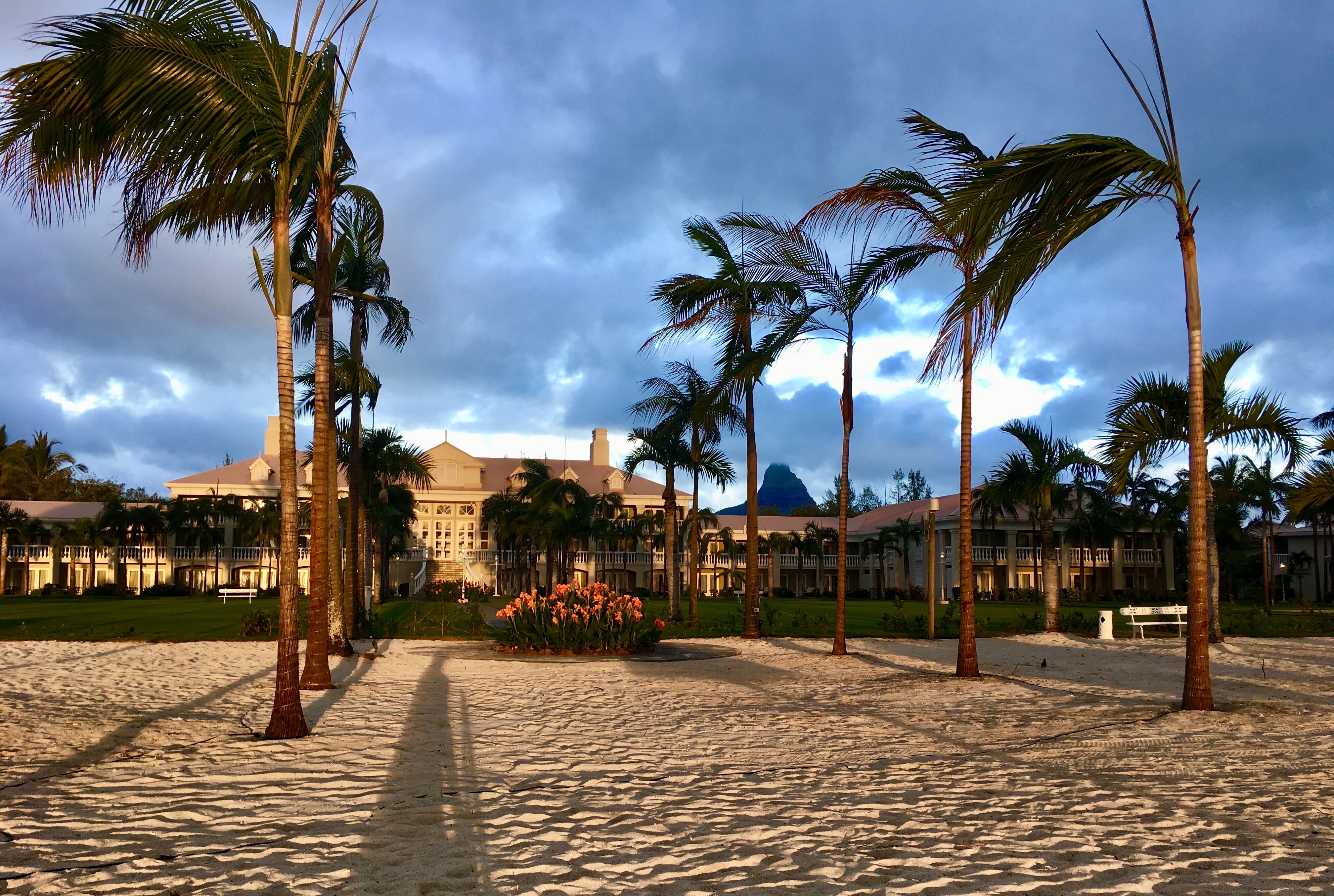 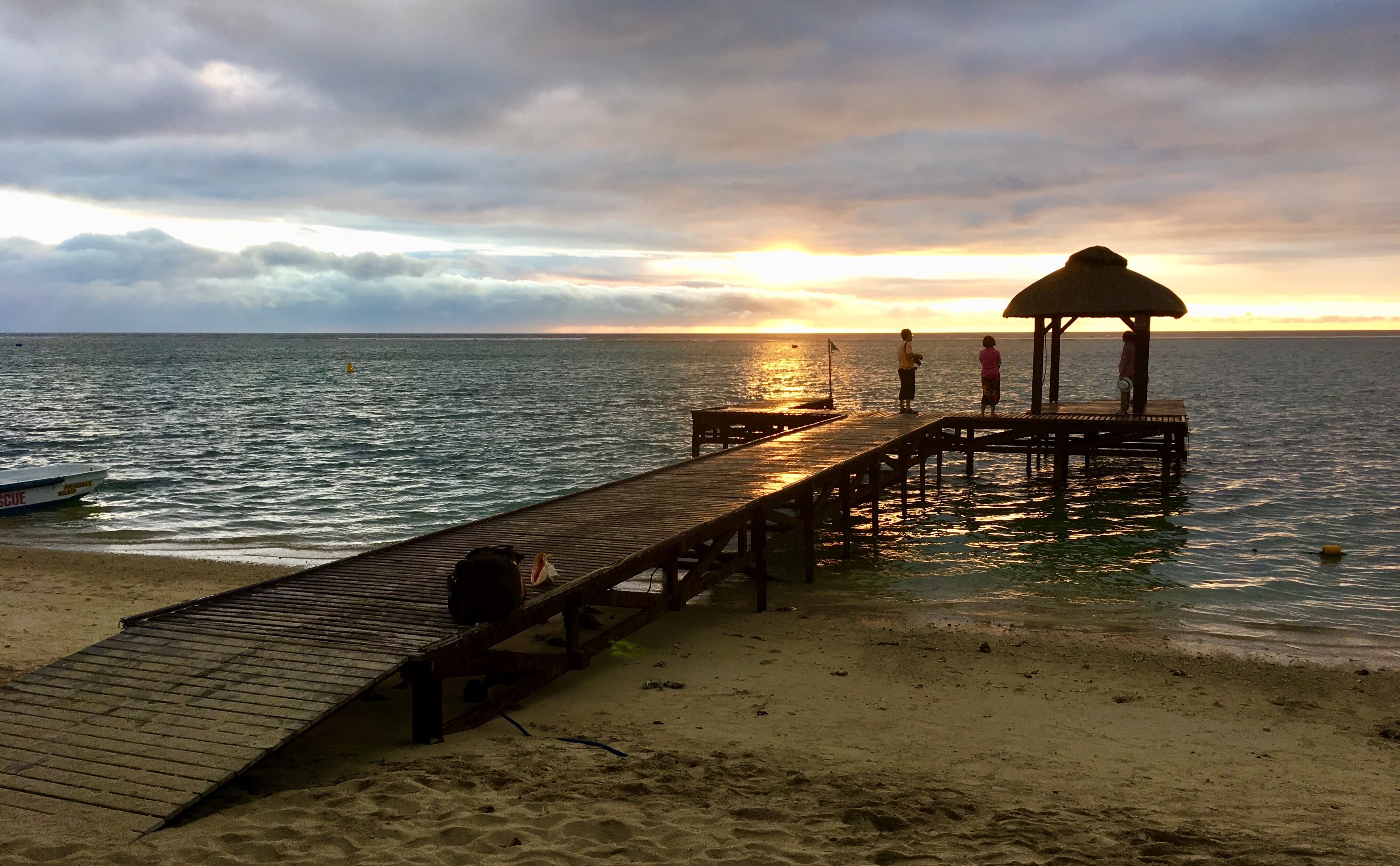 The next morning I set out to rent a motorbike in Flic-en-Flac. Since it was Saturday, many of the shops were closed. After walking in circles and few times and talking with several locals, I found a guy who agreed to rent me his for the weekend. We settled on $6/day, which was a pretty good deal and made me feel like I was making up for the cab ride the night before.

I saddled up and headed south to Le Morne Brabant, the face of Mauritius. As the story goes, the peninsula and mountain were a former refuge for runaway slaves. Today, it is a popular hiking spot for both tourists and locals. The hot and sweaty trail is 3.5 km’s long and takes about 90 minutes. 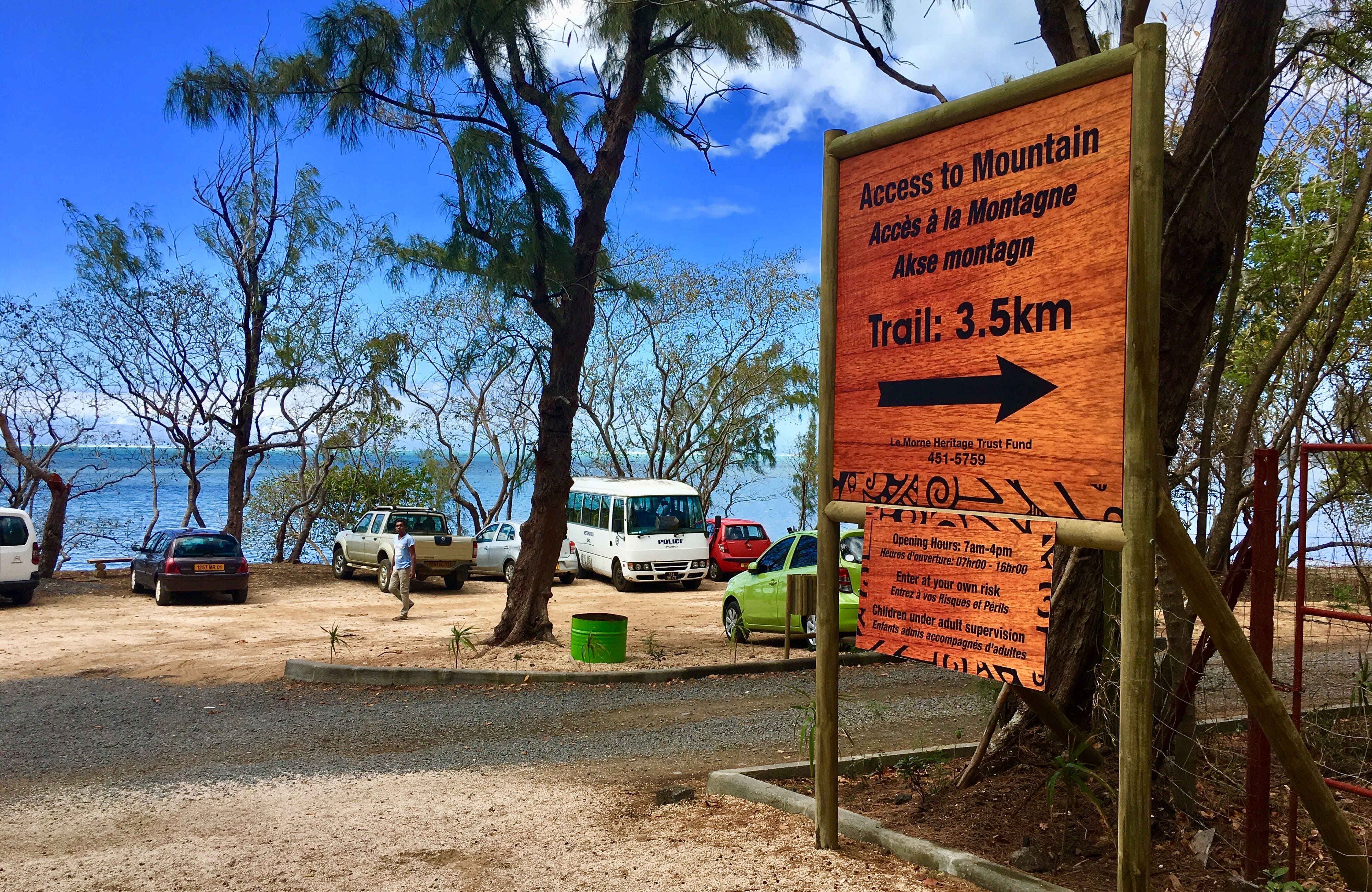 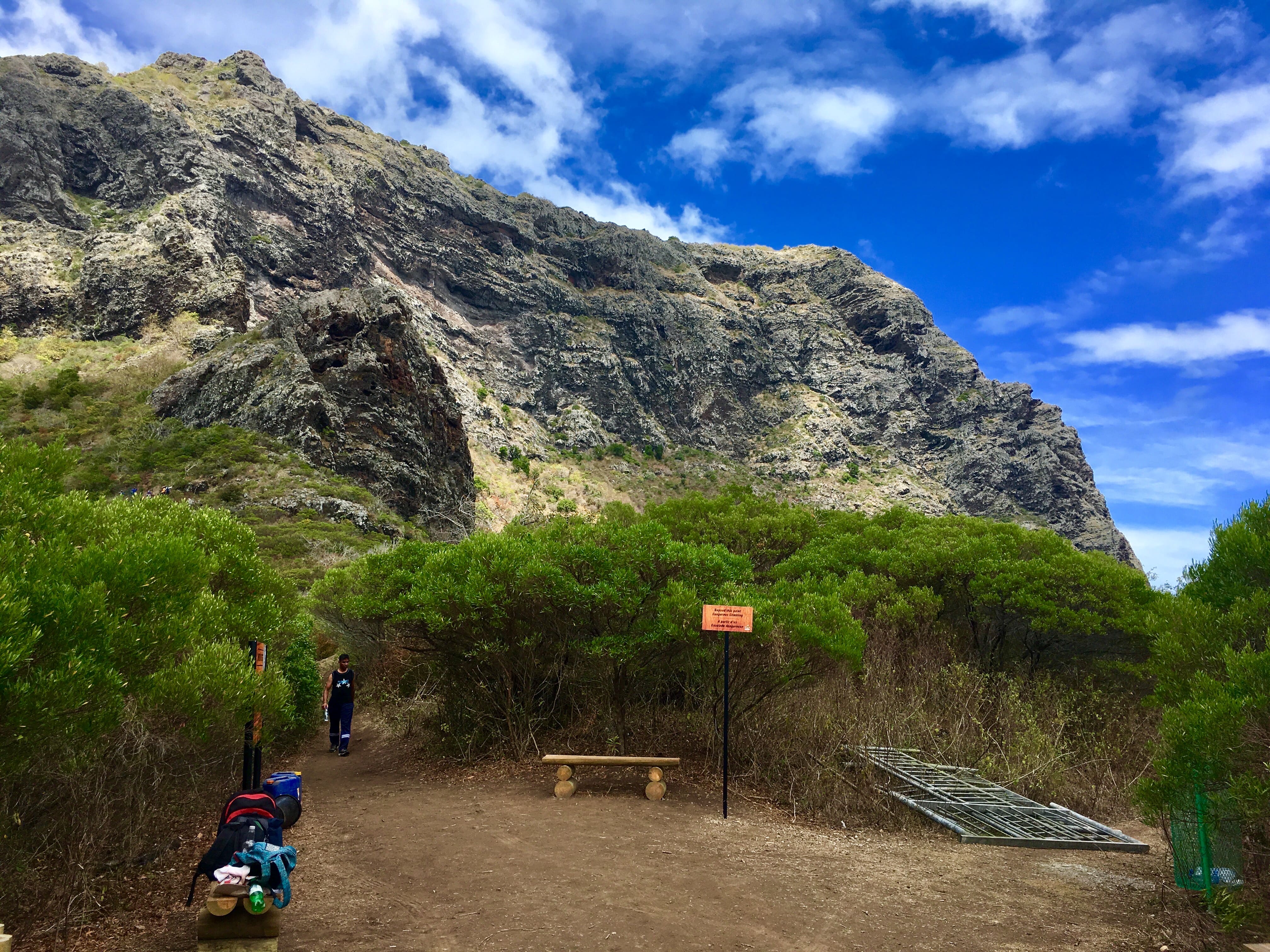 Towards the top, it gets pretty steep. There are even some ladders and ropes, which reminded me of Lion’s Head in Cape Town. I lucked out with the weather and had an incredible view of the Indian Ocean and the rest of Mauritius from the summit. A few others were up there too enjoying their selfie sticks and the completion of a Saturday morning workout. 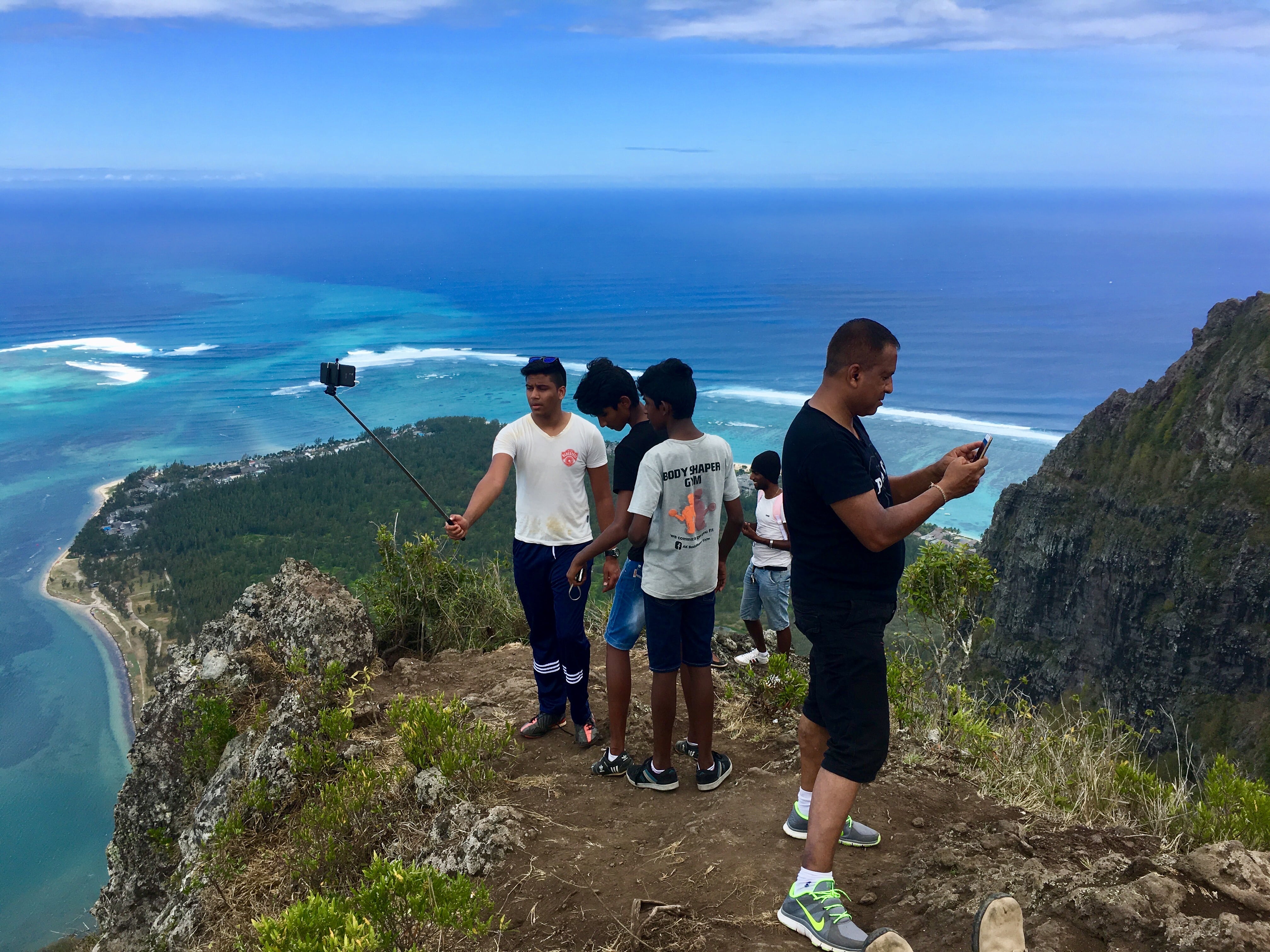 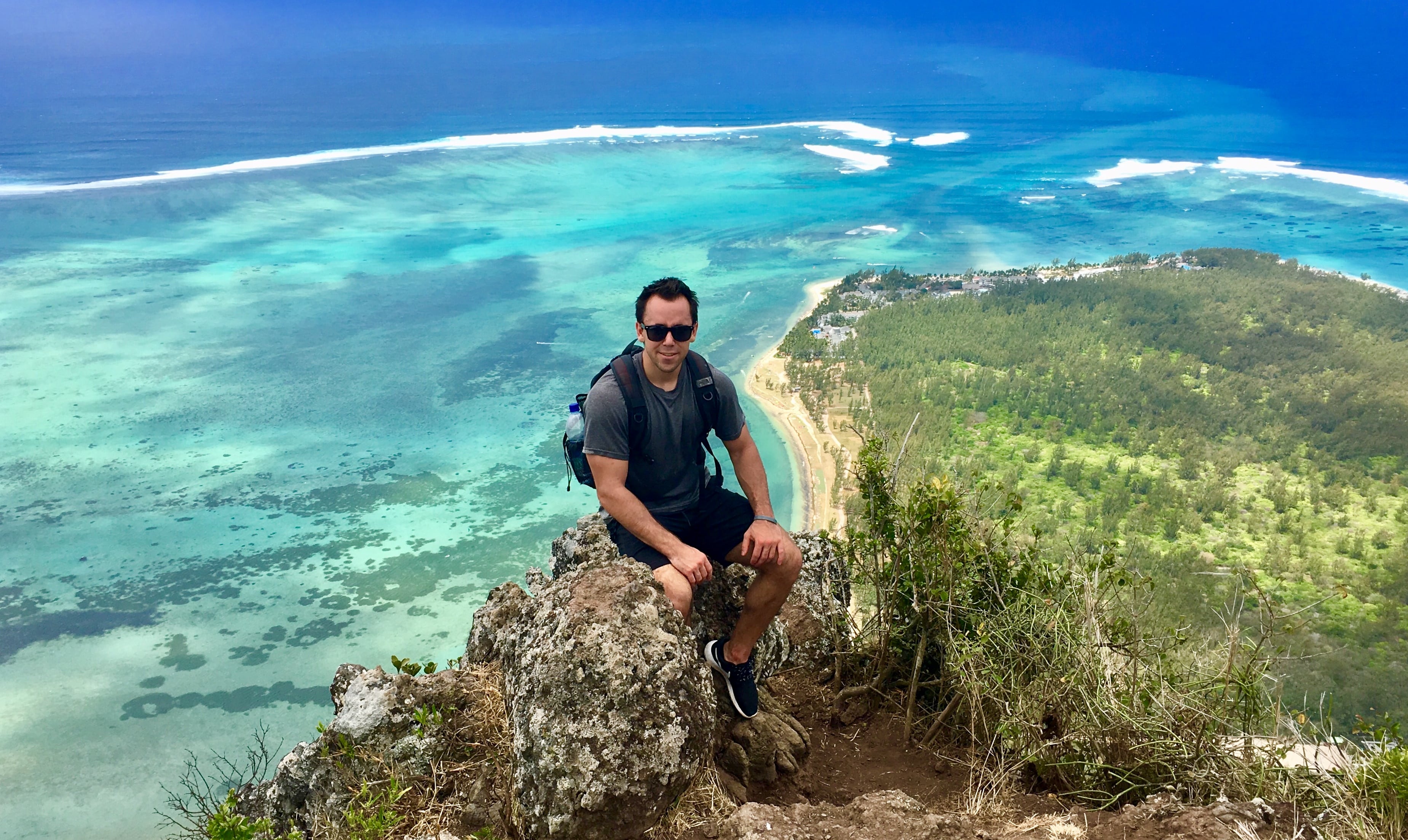 Walking down is always a bit underestimated. I’ve found it to be actually harder on your legs and knees than going up. Regardless, I was happy to get the exercise.

From the mountain, I drove inland to Chamarel, home of the ‘Seven Coloured Earths.’ There’s a small fee to get into the park but I don’t remember exactly how much. It’s an interesting geological formation. Apparently the volcanic rock has never eroded despite the tropical climate and has therefore turned into multi-colored clay. Also nearby are some giant tortoises. You can get up close and take photos with them. I believe the ones I saw in the Seychelles were slightly bigger, but these types of unique and intimate wildlife encounters are always exciting for me. 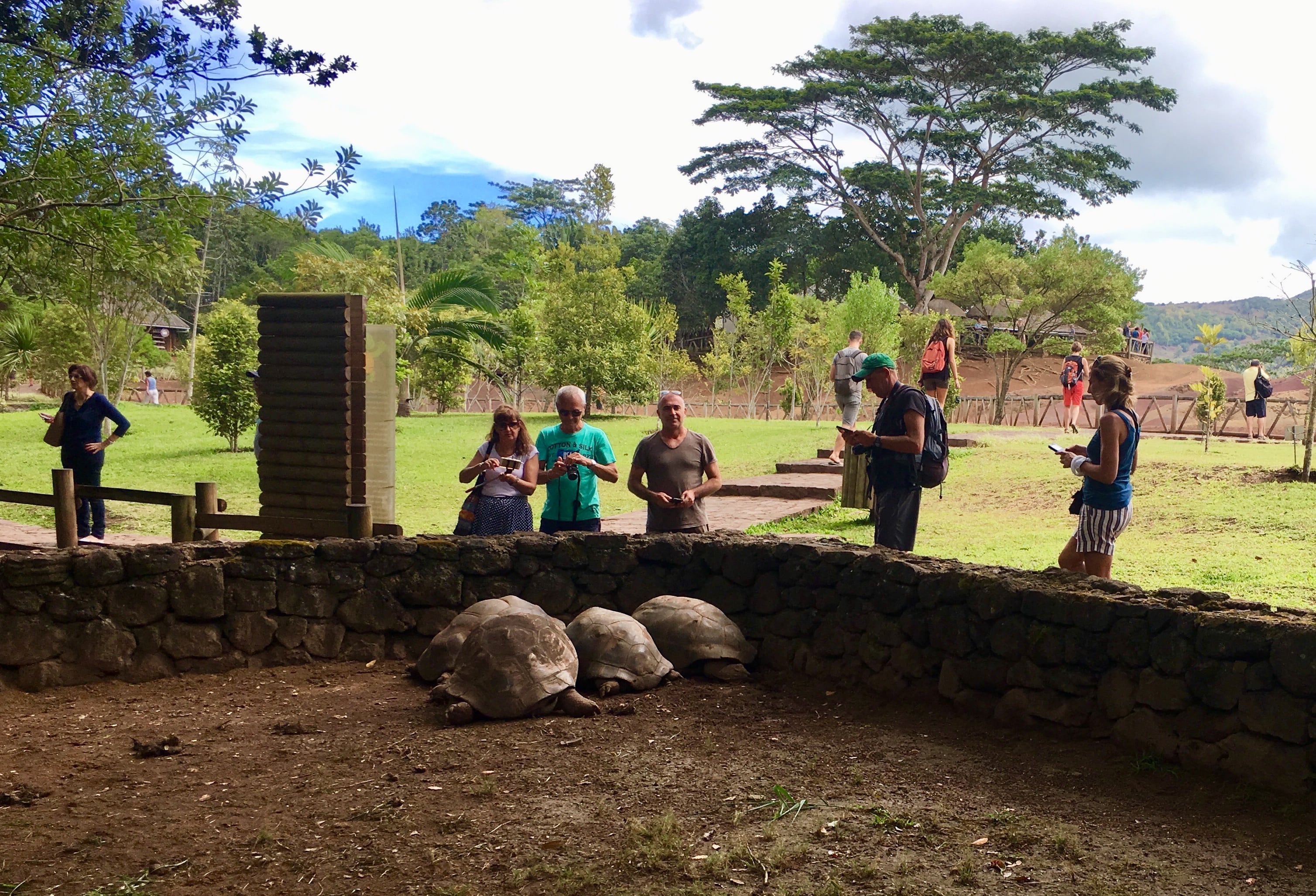 From there, I drove down the road to Chamarel Waterfall. It is part of the same park as Seven Coloured Earths. The falls is a short walk from the parking area and worth a visit. At 83m (272 ft.), it’s decent size and the Black River Gorge provides an ideal backdrop. 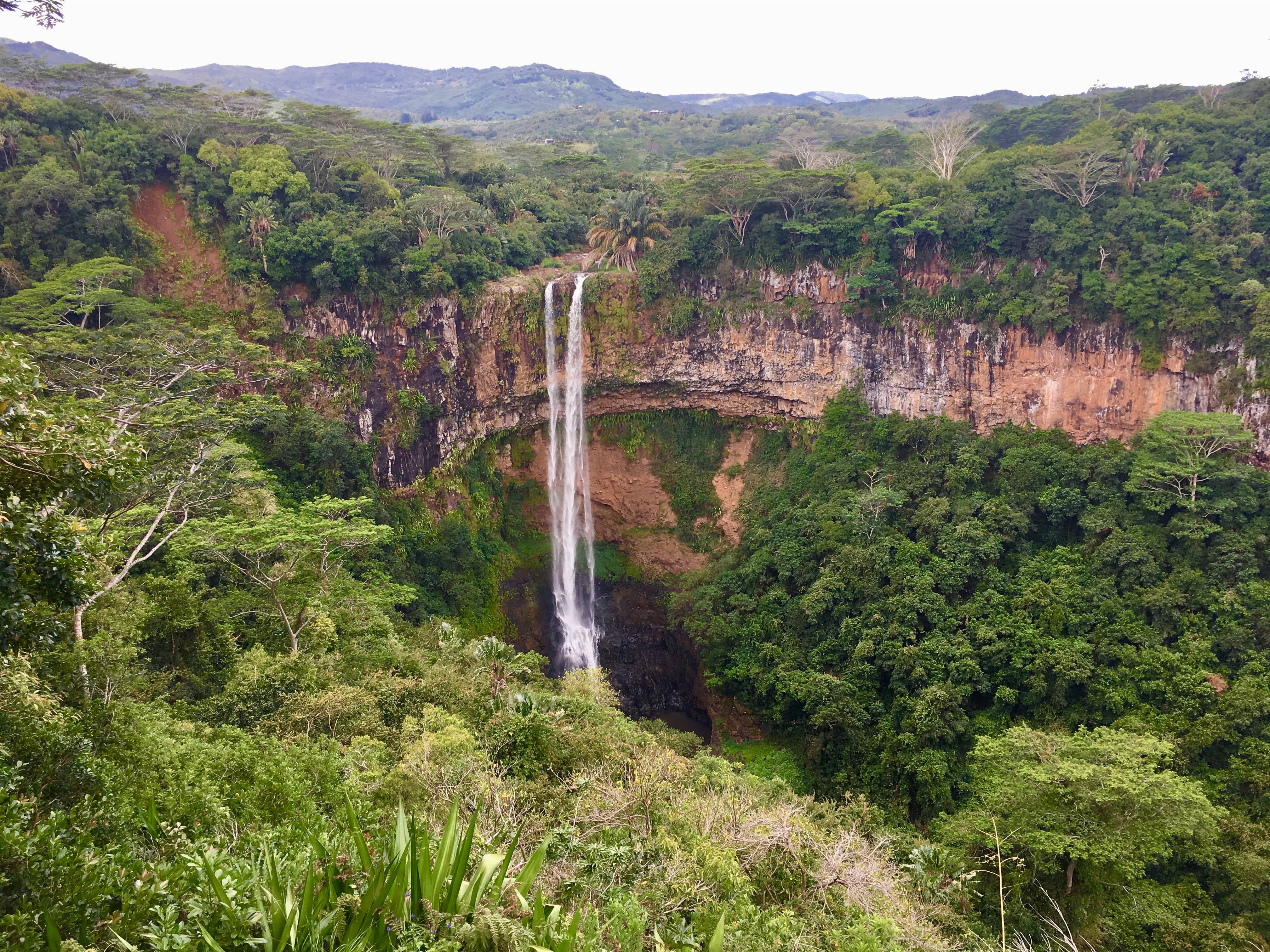 When leaving, I realized that my bike was almost out of gas, which was not very timely considering I was in the middle of the jungle. Thankfully, from there to Case Noyale, a coastal town and site of the nearest gas station, was pretty much all downhill. On big slopes, I threw the bike in neutral to try to save gas, although I’m not sure if that actually helps or is just a myth. Can any gearheads confirm? I managed to make it to the station in time and filled up for about $3. I was pretty wiped out and headed straight back to Flic-en-Flac for the night

On Sunday I continued the adventure, this time heading north to Port Louis, the Mauritian capital and largest city. It’s interesting to see how landscapes and communities can quickly change when moving between attractions – five-star resorts on the coast to many of the inland areas where authentic African lifestyle takes center stage. I stopped in town for 11am mass at St. Louis Cathedral and afterwards took a walk around the city center and Caudan waterfront. 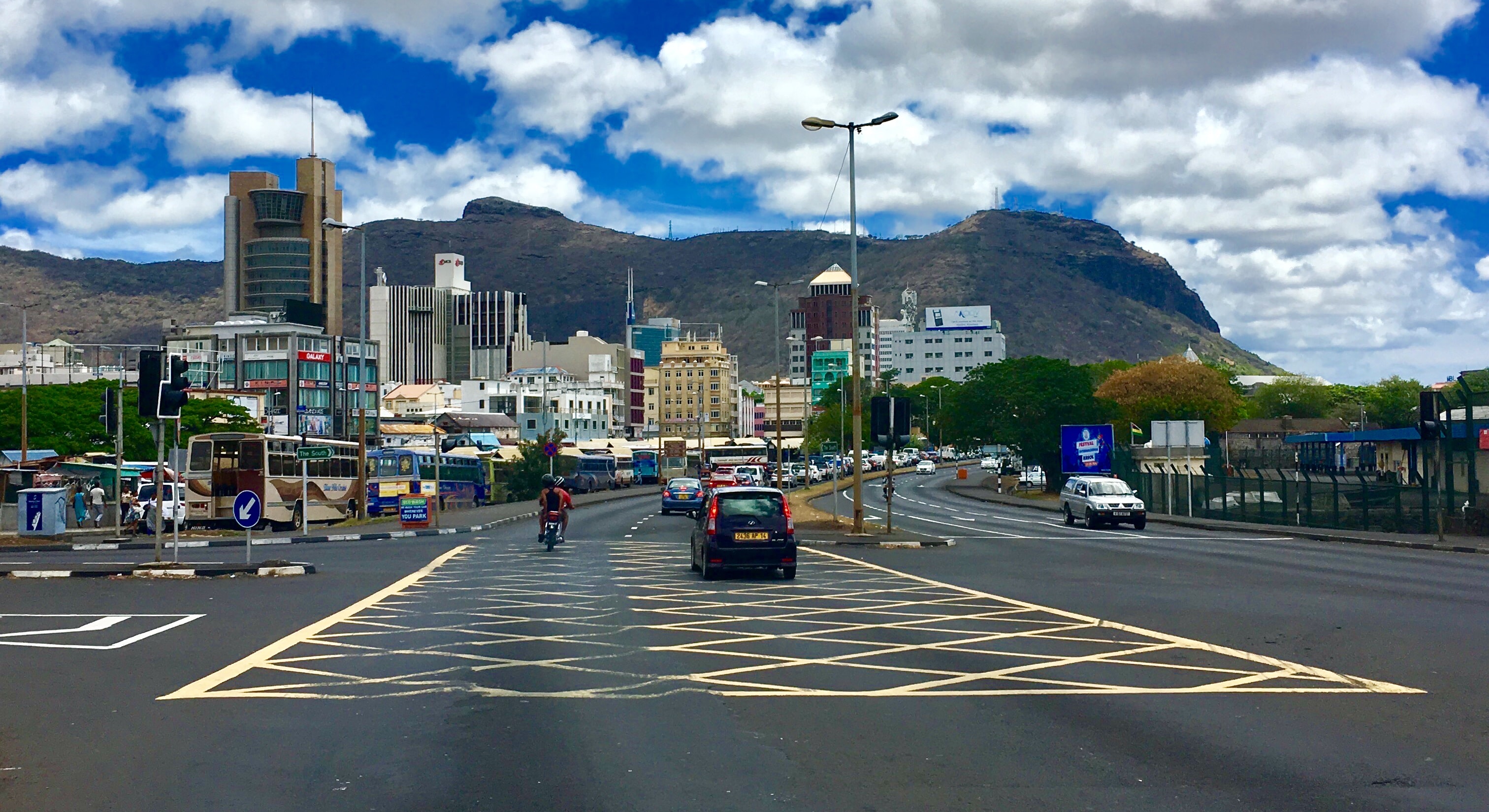 From there, I continued on to Grand Baie, the northern most point of the island. There were quite a few tourists in GB, but that also meant quite a bit of life. Lots of shops, restaurants, hotels and a nice beach. It is more polished and a better place to hang out than Port Louis. If it wasn’t geographically isolated, I would have stayed here instead of Flic-en-Flac, but I knew I wanted to be closer to Le Morne Brabant and Chamarel in the south. 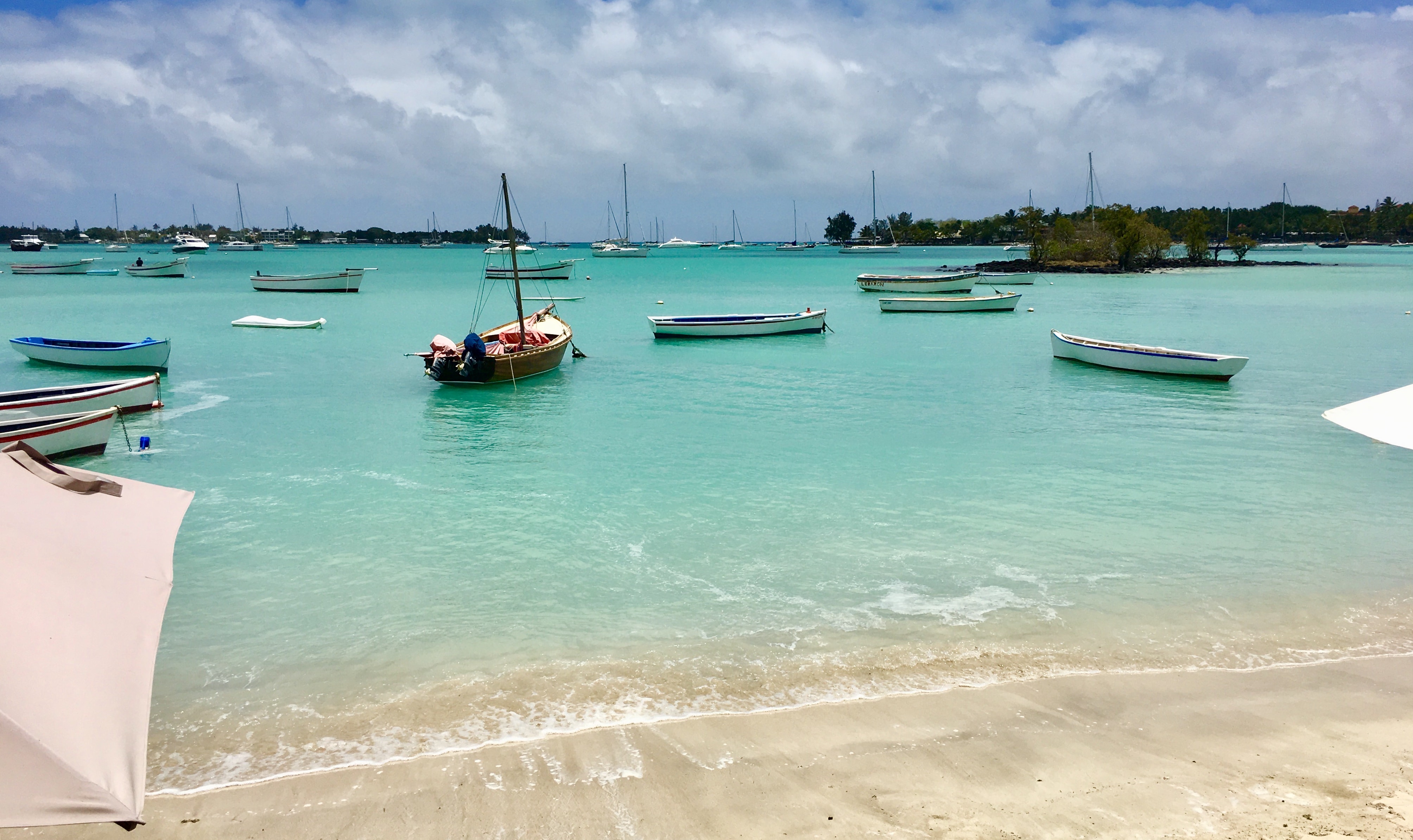 Driving all the way back to my hotel from GB took just shy of two hours. The weather was perfect and my 100cc motorbike was a trooper. Not only did I return it in one piece, but I don’t think it even had a scratch. Maybe I didn’t have enough fun on it? I’m always thankful when successfully returning bikes, cars, jet skis, etc – thankful for both my safety and that I managed to avoid a potentially huge bill for damages. 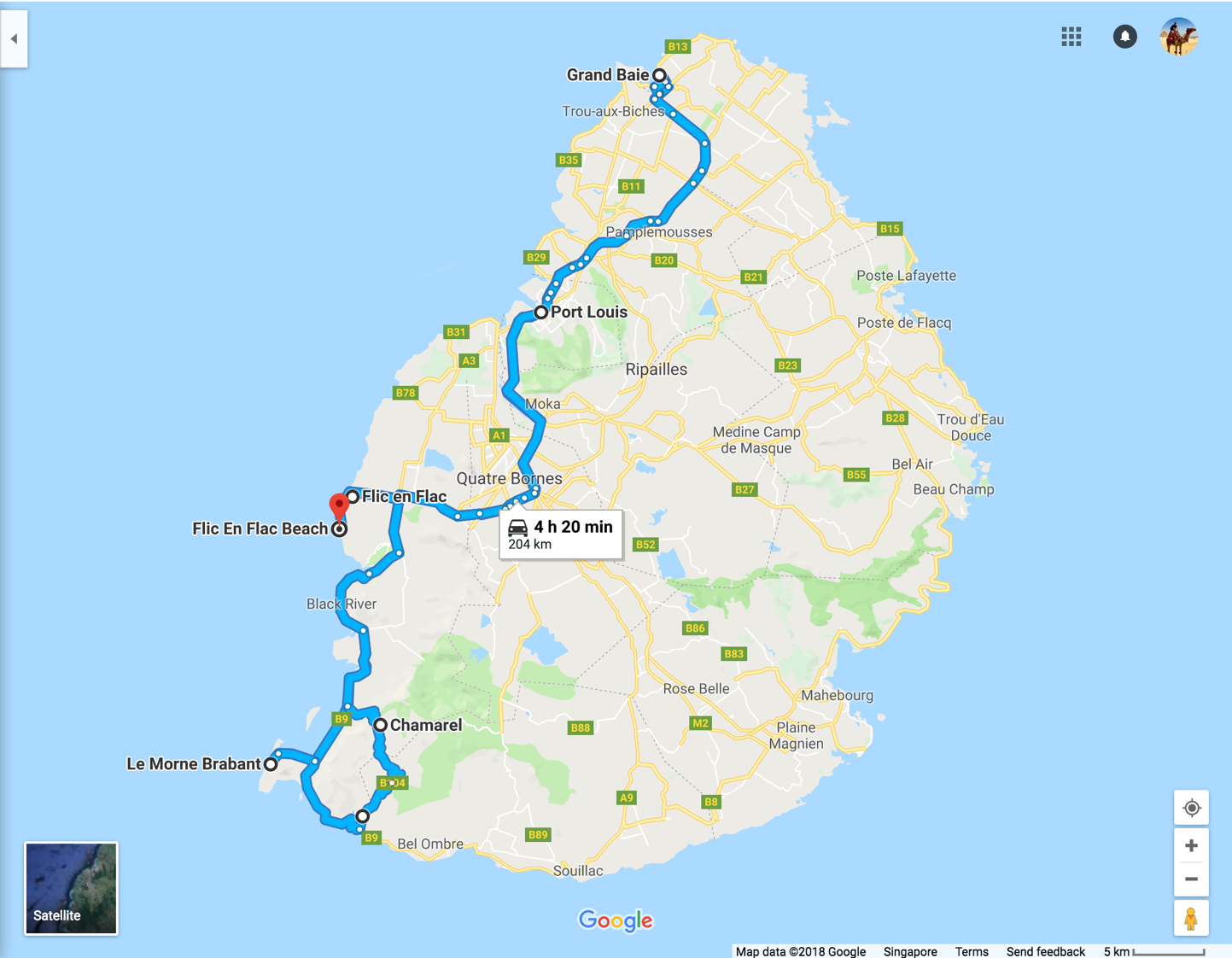 After getting ripped off (although not quite as badly) on another airport taxi, I took the redeye that night back to Singapore, again on Air Asia via Kuala Lumpur. Despite having limited days and not seeing a dodo bird, the distinct cultural identity of Mauritius in tandem with perfect weather and pristine beaches made for a memorable visit. I hope to be back soon!

Have you been to Mauritius? Did you enjoy it?