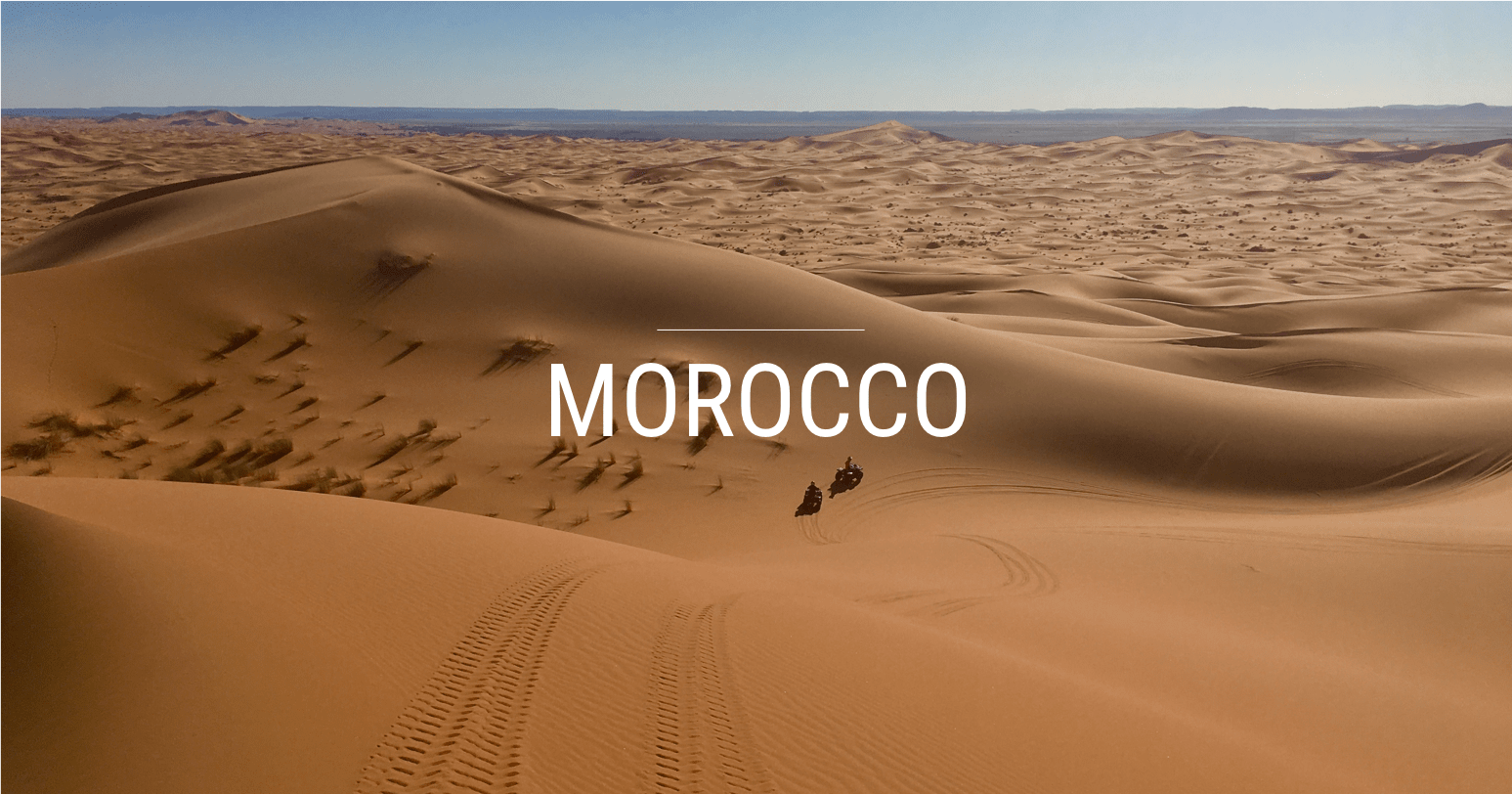 | 🇲🇦| Morocco occupies the African continent’s northwestern extremity and, since 1956, has been independent of French rule. It shares a border with Algeria, Western Sahara, the Atlantic Ocean, Mediterranean Sea and is separated from the southern tip of Spain by the Strait of Gibraltar’s narrow, seven-mile corridor. Although geographically in Africa, Morocco is more like Aladdin than Lion King, with a cultural blend of Berber, Arab and Eastern European influences. Morocco’s unparalleled desert-mountains-beach combination and bustling medinas of several captivating cities make it easy to understand why it routinely claims the title of Africa’s most-visited country.

In order to make any kind of legitimate attempt at seeing Morocco in six days, I quickly determined that this visit needed to be a road trip. My friend Emily joined the party and we blocked off the 2017 Chinese New Year holiday to take on the adventure. Flying in and out of Casablanca meant that we thankfully avoided the two things notorious for sending rental car fares through the roof – 1- Picking up and returning the car in different locations, and 2- Crossing country borders. Despite this, I found renting a car in Morocco to still be more expensive than in most places. We paid roughly US$120/day for an automatic SUV.

The two of us were scheduled to meet in Paris and fly together to Casablanca, however, her flight from Atlanta was delayed which bumped everything back a few hours. As a result, it meant I had time to explore Casablanca, something we were planning to skip by driving straight from CMN airport to Fez. I spent the majority of my time near the Hassan II Mosque, a commanding structure overlooking the Atlantic Ocean. It is the second largest mosque in world (the first being Mecca’s Al-Haram Mosque) and, at 201 meters (689 feet), is the home to the world’s tallest minaret. During times of prayer, the grounds can host more than 100,000 worshipers at once. 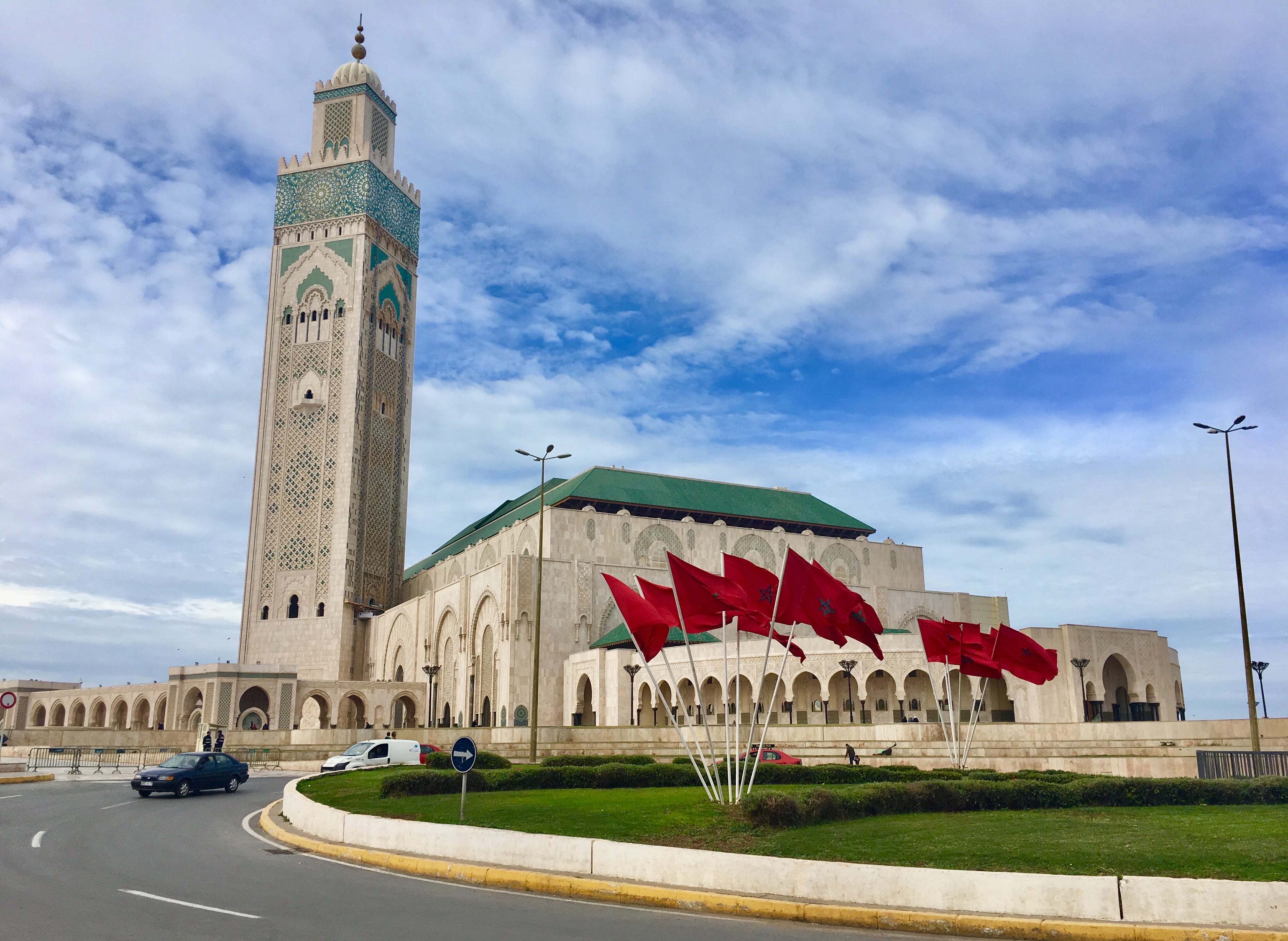 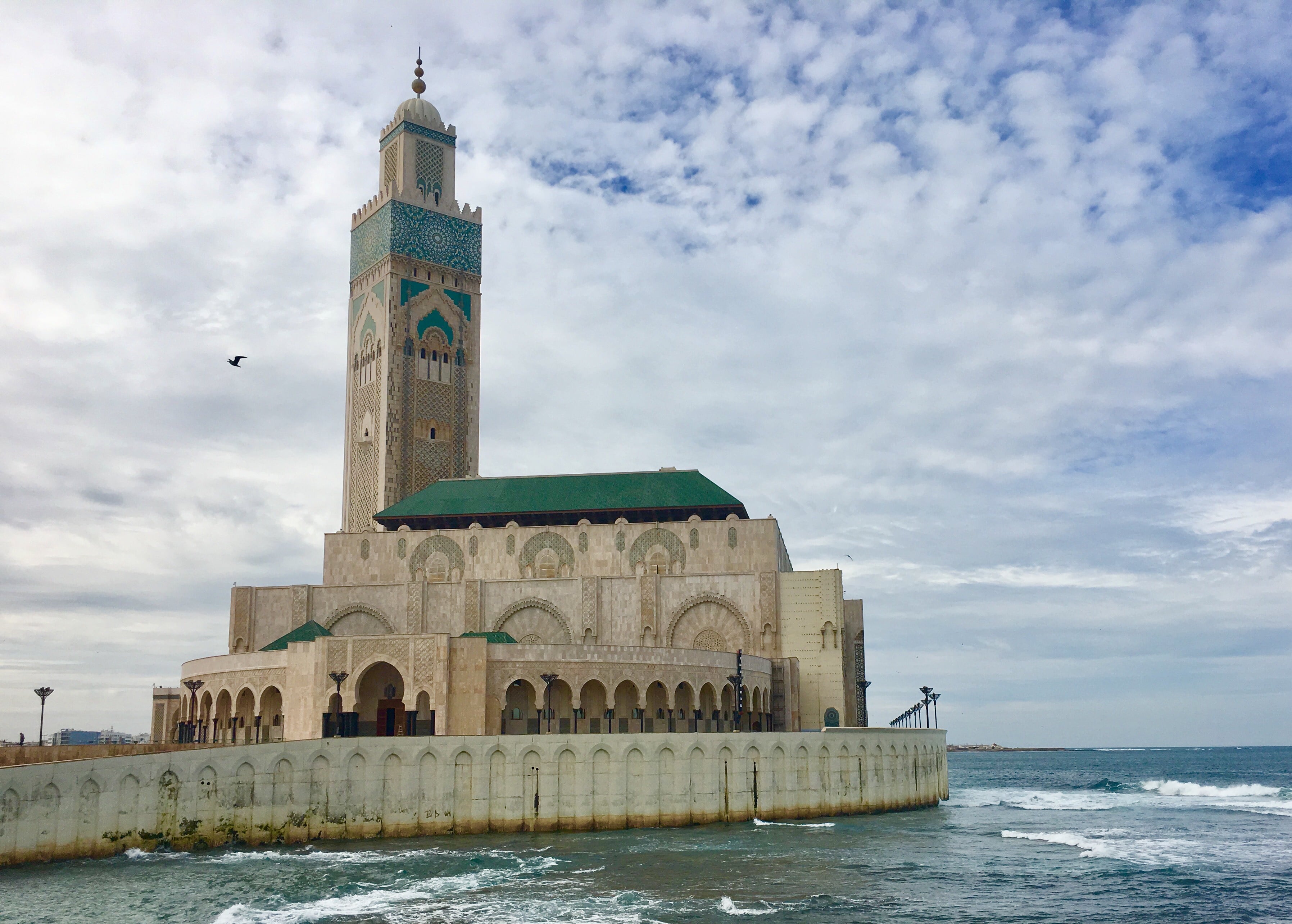 After a quick airport pickup, leg one of the trip was underway as we set out on a three-hour drive to Fez. Given the flight delay, we missed our opportunity to visit Meknes, something I was excited to do and have since added to my Morocco 2.0 ‘to-see list.’ En route, our rental car gave us some trouble. The oil light began flashing and beeping at a comedic rate. We stopped at a gas station for some assistance before calling Mohanad, my contact at the rental car company. We sent him the video and, in a fantastic display of hospitality, he promised to bring us a new car by the following morning.

The car hung in there and we made it to our hotel, the Fez Marriott, a gorgeous property that had been open for only a few days prior to our arrival. After a much-needed night’s sleep, we got up early the next day for a morning visit to the city. Fez is an imperial city of Morocco and home to Fes el-Bali, arguably the Arab world’s best-preserved old city. The medina and narrow alleyways can be easily explored on foot. Fez is also well known for being the site of Qarawiyyin, the world’s oldest existing university established in 859AD. The highlight for us, however, was the Chouara Tannery, one of Morocco’s most prosperous tanning sites. The individual vessels are filled with dye and used to soak the hides of cows, sheep, goats and camels. Leather goods produced here are exported to all corners of the globe. 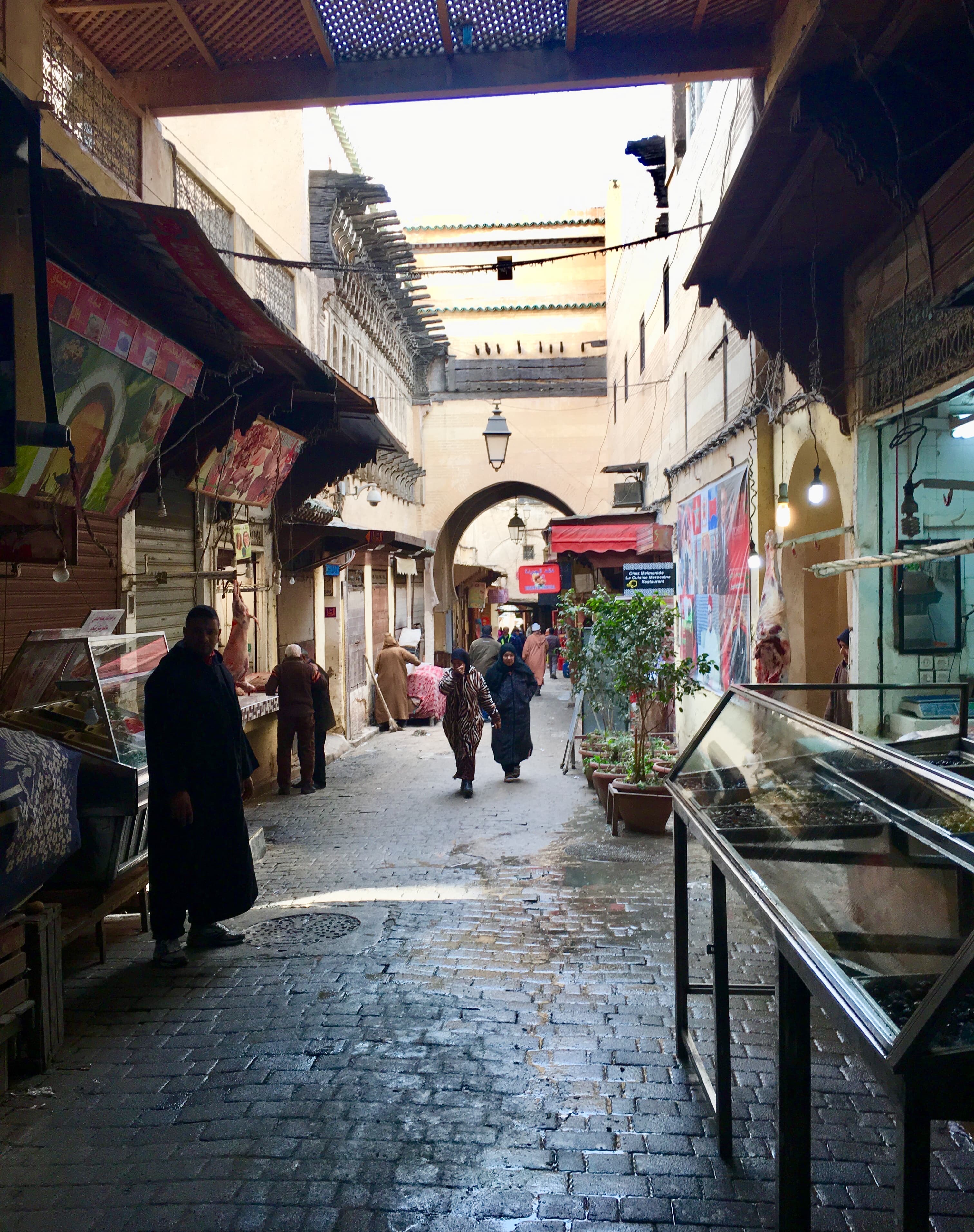 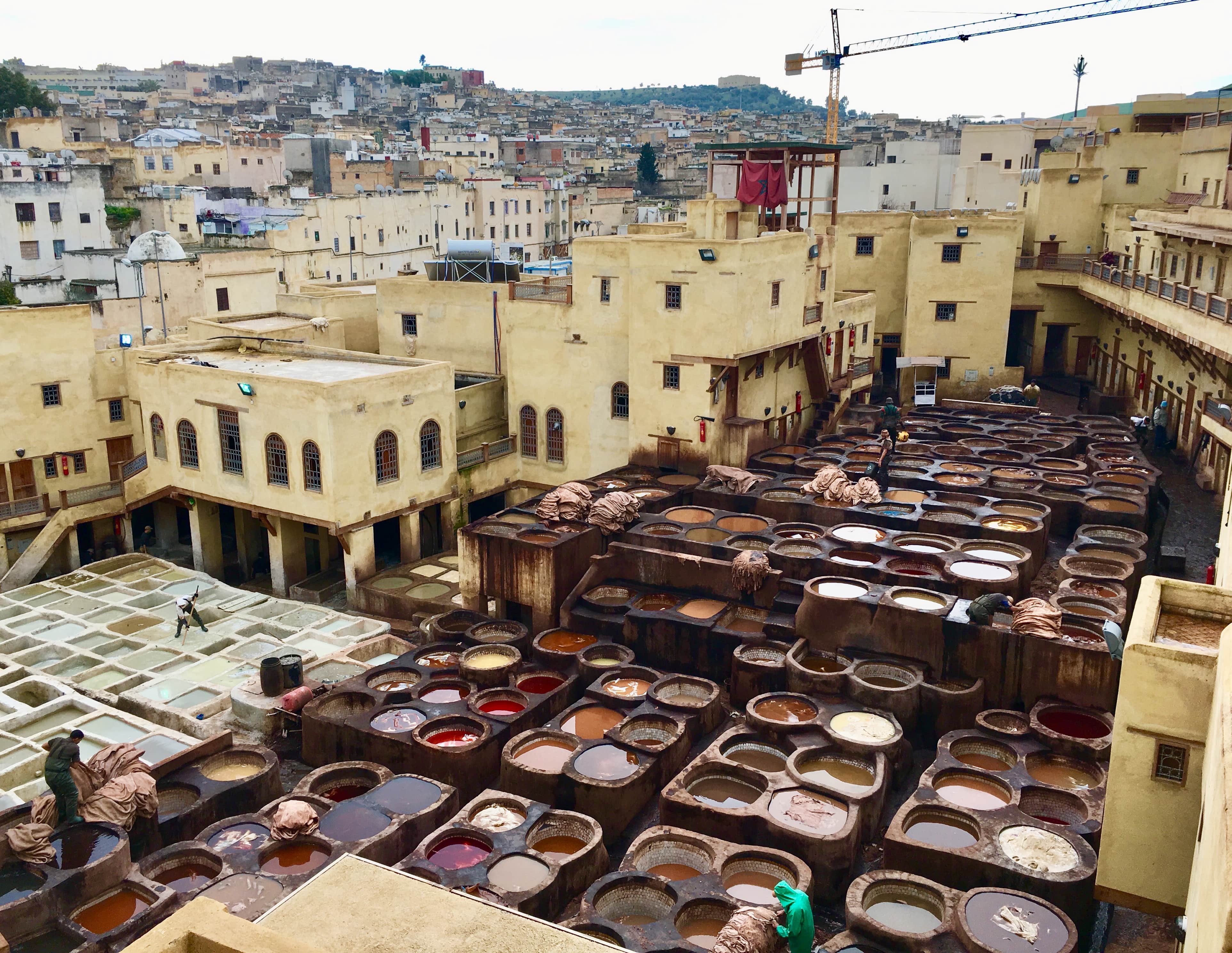 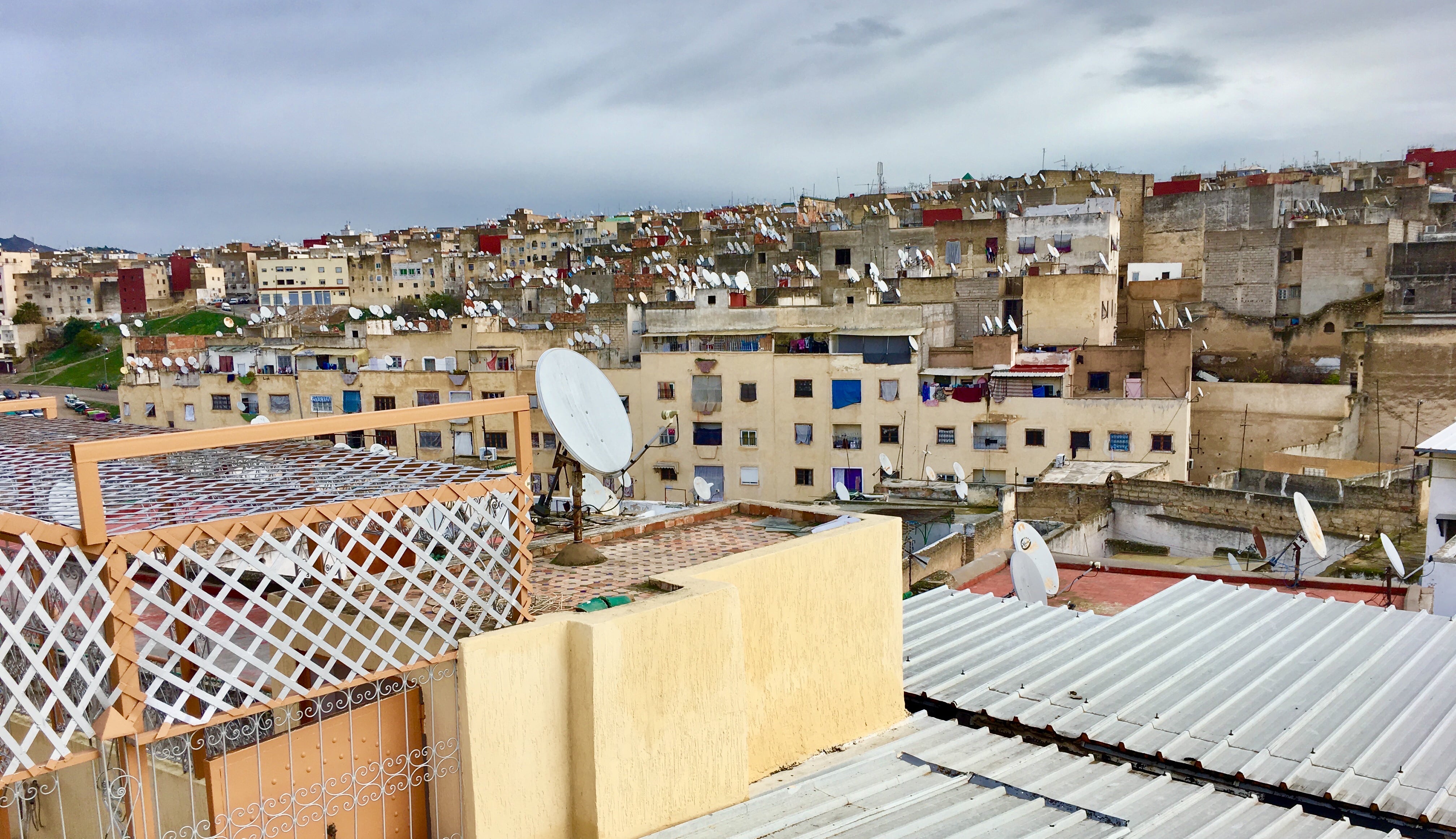 Back at the hotel, we were met by Mohanad who was waiting with a replacement car. He had driven two hours from Rabat that morning to meet us before we headed into the desert, a gesture that proved to be a game changer for our trip. A huge thanks to him for the effort! We spent the remainder of the day on a ten-hour journey from Fez to Merzouga, Morocco’s iconic Sahara Desert town. It was a gorgeous drive through vast and diverse terrain, notably the town of Irfane, dubbed ‘the Switzerland of Morroco’ and an area where it seemed to just magically be snowing. 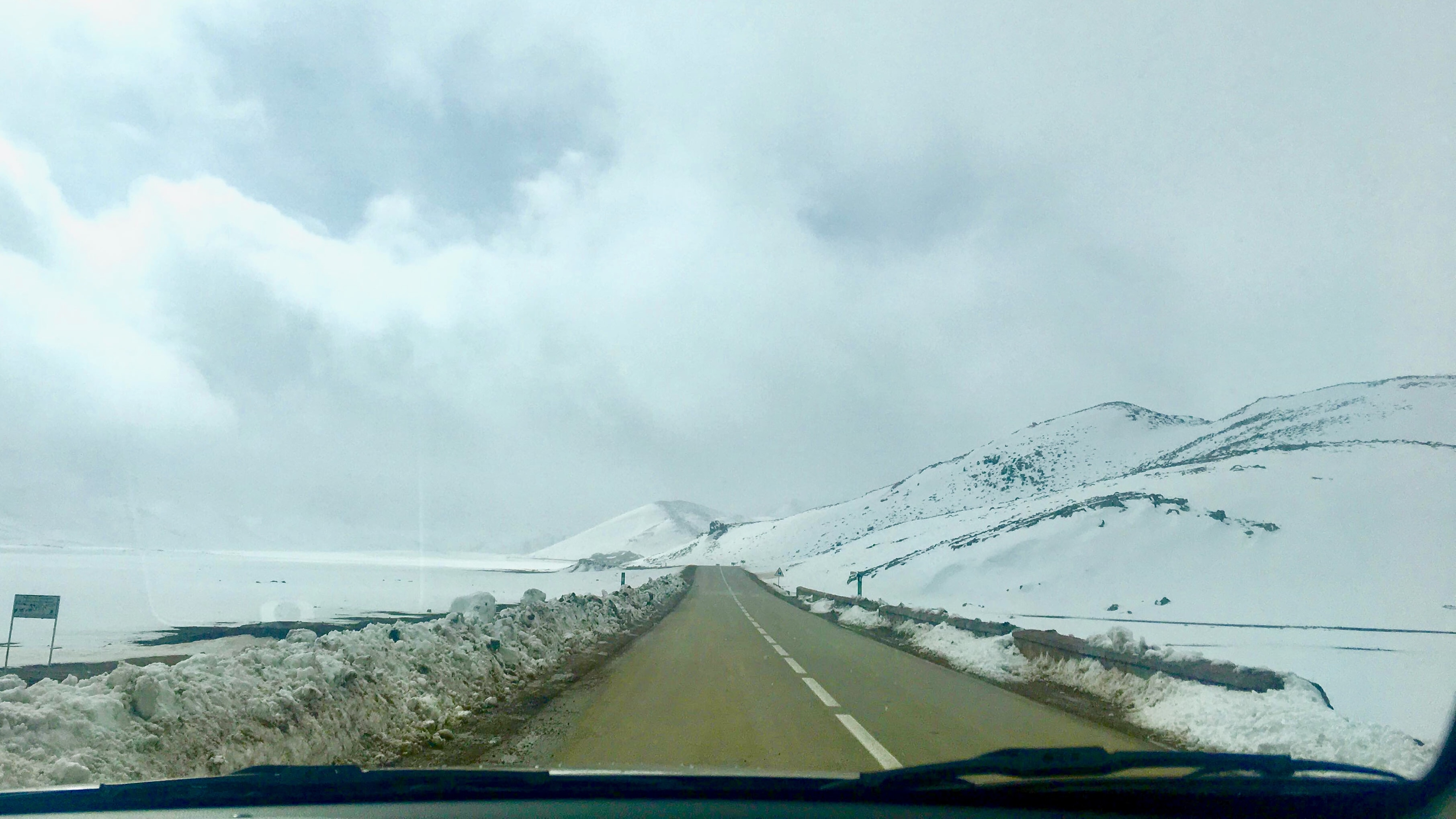 We arrived at about 10pm to the Azawad Desert Camp, an accommodation that proved to be a unique and memorable two-night glamping experience. The ‘complex’ sits near the Erg Chebbi Dunes and consists of ten nomad tents equipped with king sized beds, Berber art décor and modern bathrooms. There is a restaurant tent that serves food round-the-clock and dozens of available desert activities such as camel trekking, ATV’s and sand boarding. All of which can done in the vicinity of the camp grounds. We didn’t realize how incredible the location was until the following morning when we walked outside for the sunrise. It’s tough to beat dawn and dusk in the desert. 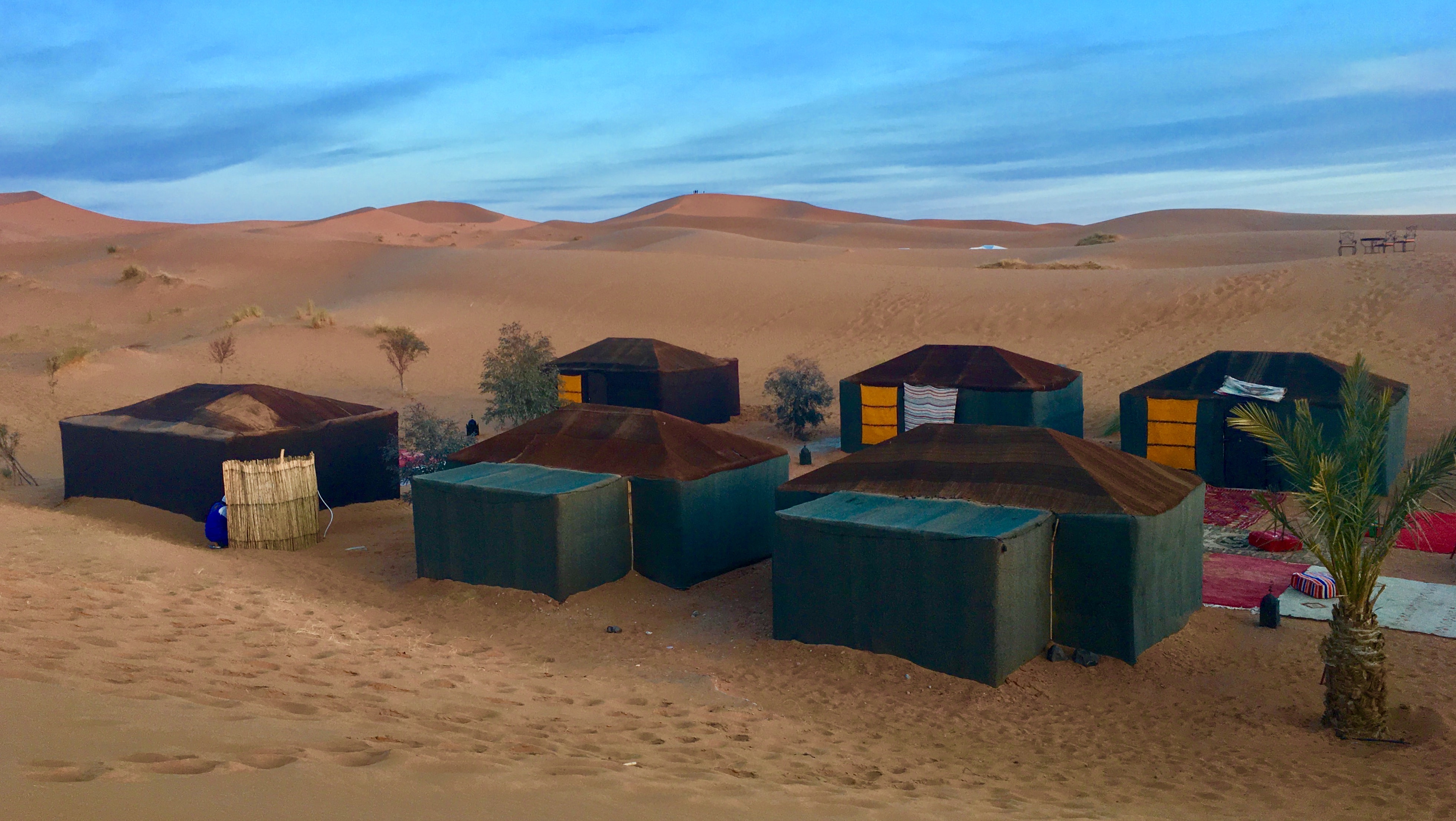 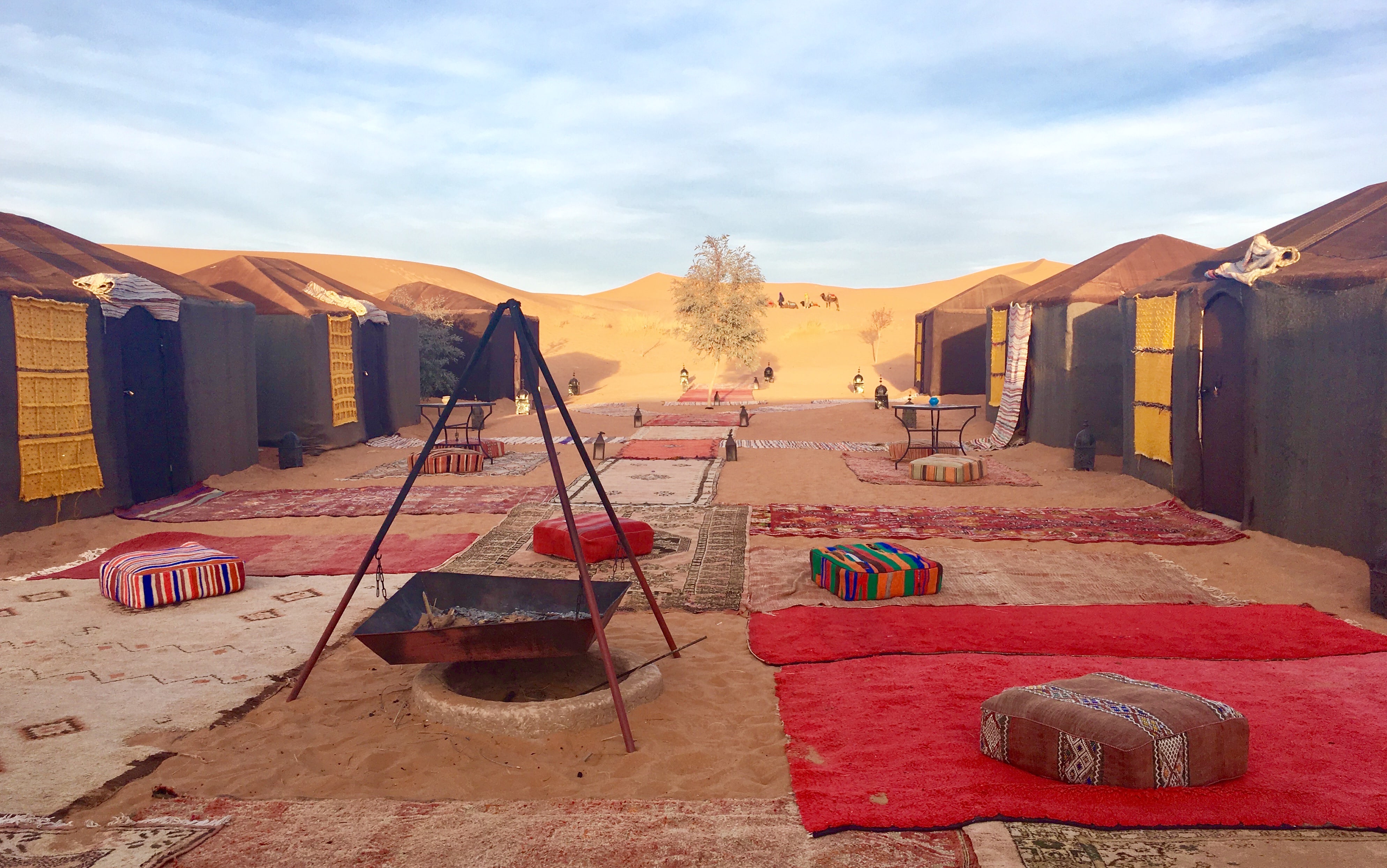 We spent that entire day exploring the desert and surrounding area alongside an energetic and animated local tour guide. I’m told that most visitors only spend one night in Merzouga before continuing on their way. If possible, I would suggest spending two. In the morning, we visited a traditional Berber family. We saw their home, had tea and even played a small soccer game with one of the boys. Unfortunately, my limited French didn’t quite bridge the communication gap to the local Berber language, but it was all smiles, which is arguably the world’s most universally positive expression. Nearby the village was a massive field of fossils. We learned that this part of the Sahara Desert was engulfed by Ocean water roughly 100 million years ago and that the fossils can contain artifacts of sea creatures and dinosaurs. 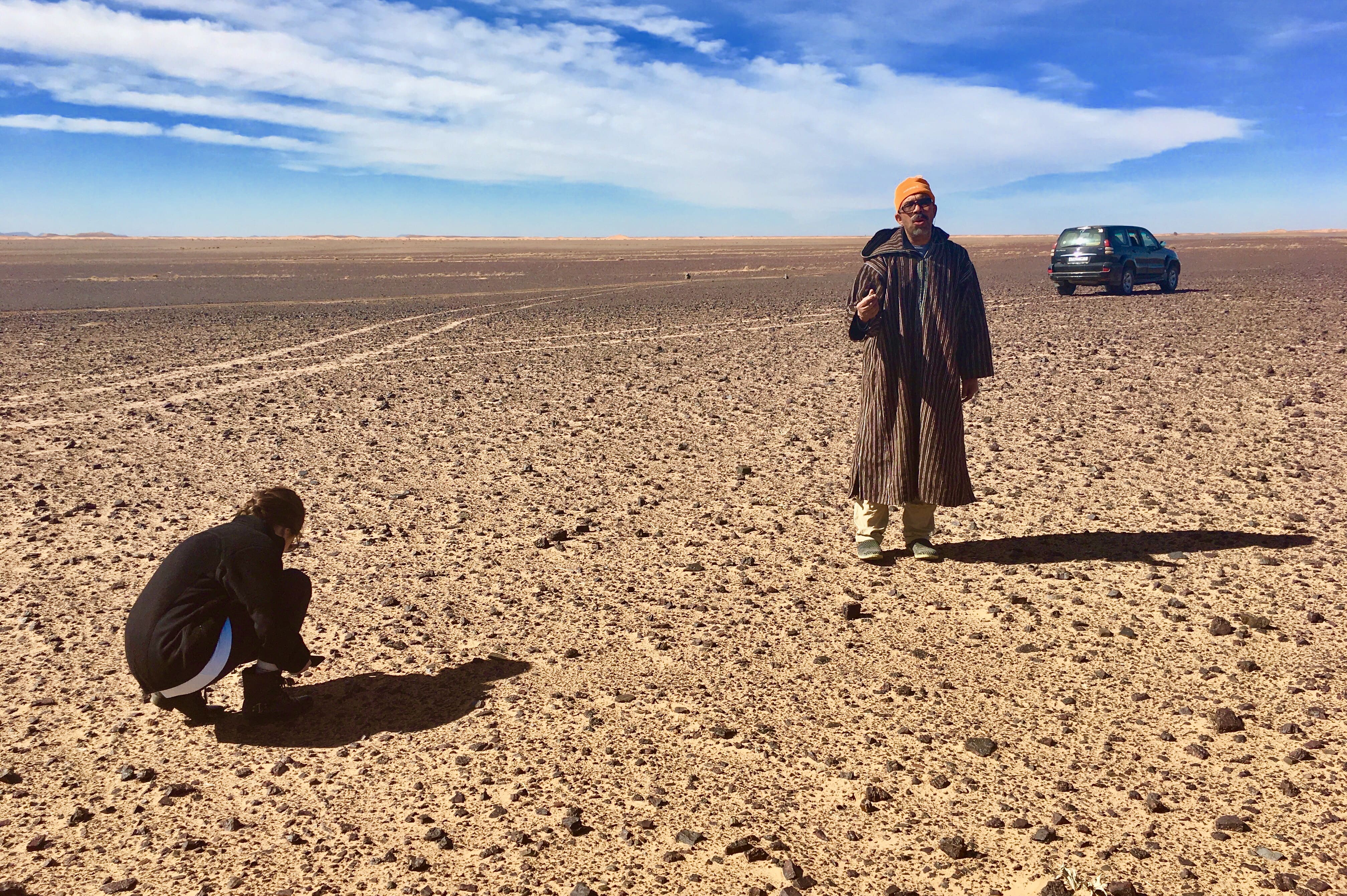 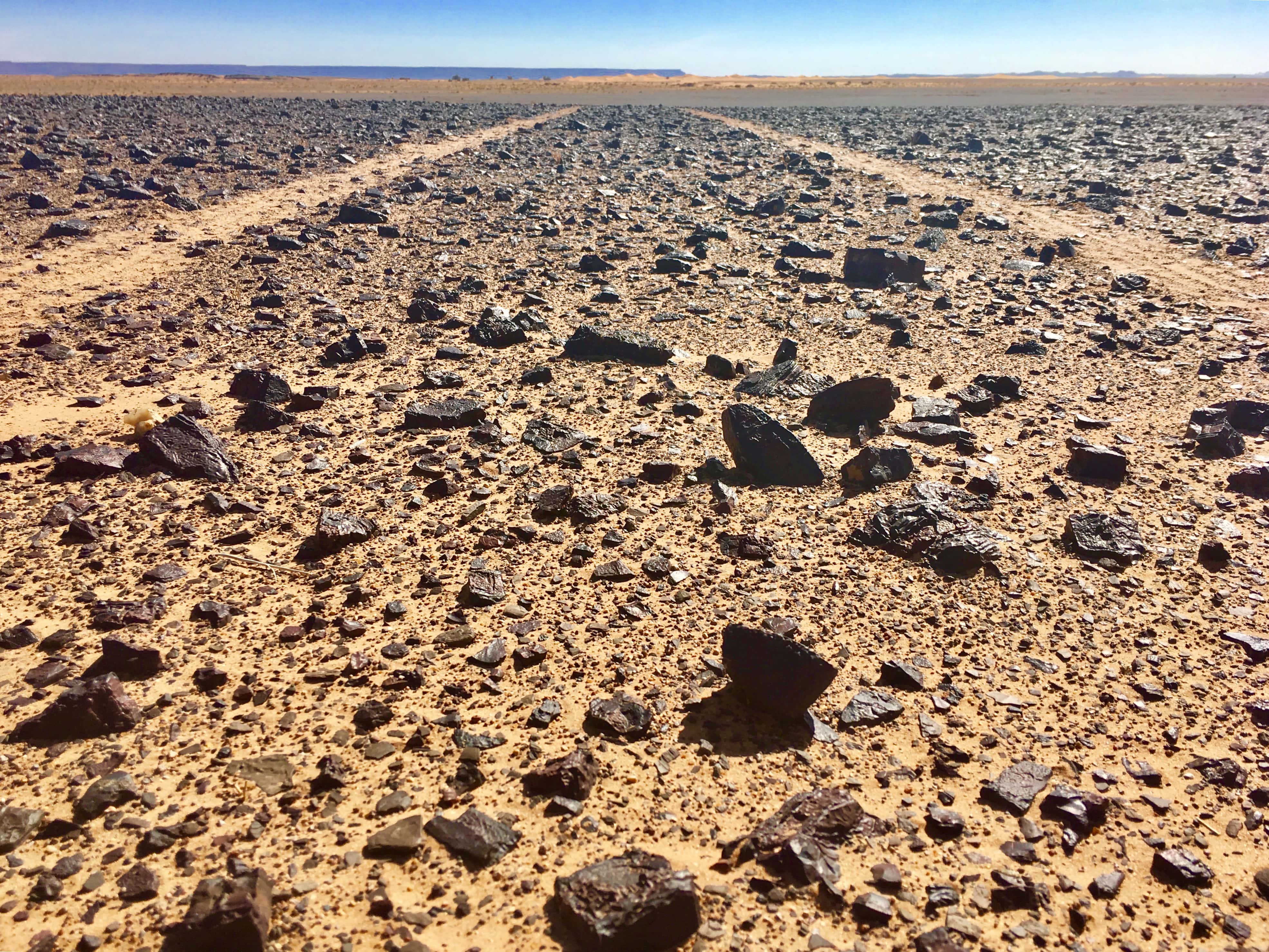 We had a traditional Berber pizza for lunch before heading out on a 90-minute ATV ride across the sand dunes. It cost €65 per person and included a knowledgeable guide to show us the best routes and help if we got stuck in the sand (which we did). It was a ton of fun and worth every penny. From the top of some dunes, the mountains of Algeria could be seen in the distance. Overall, the scenery was spectacular and made me feel as though I was playing in a giant sand box. 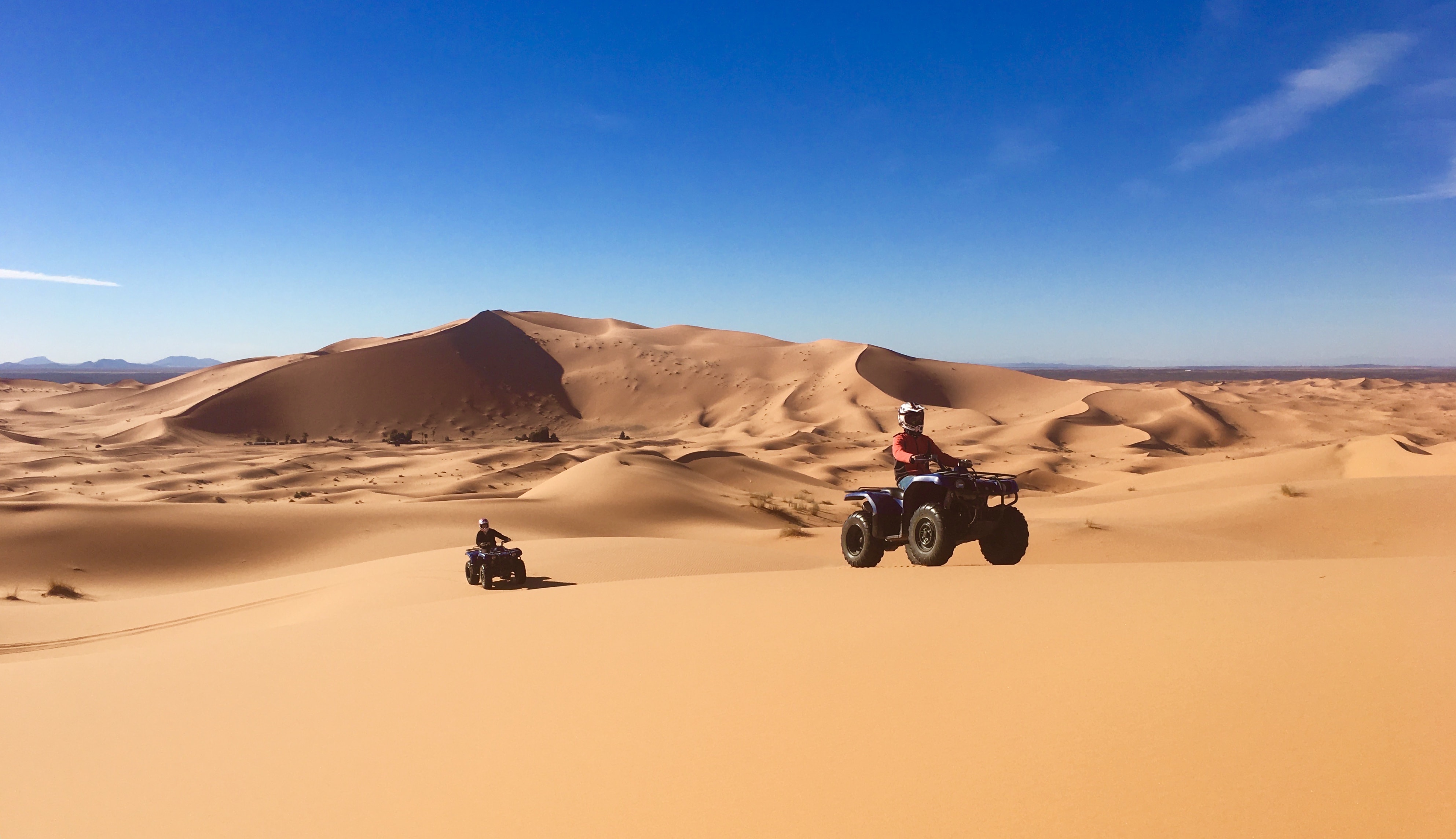 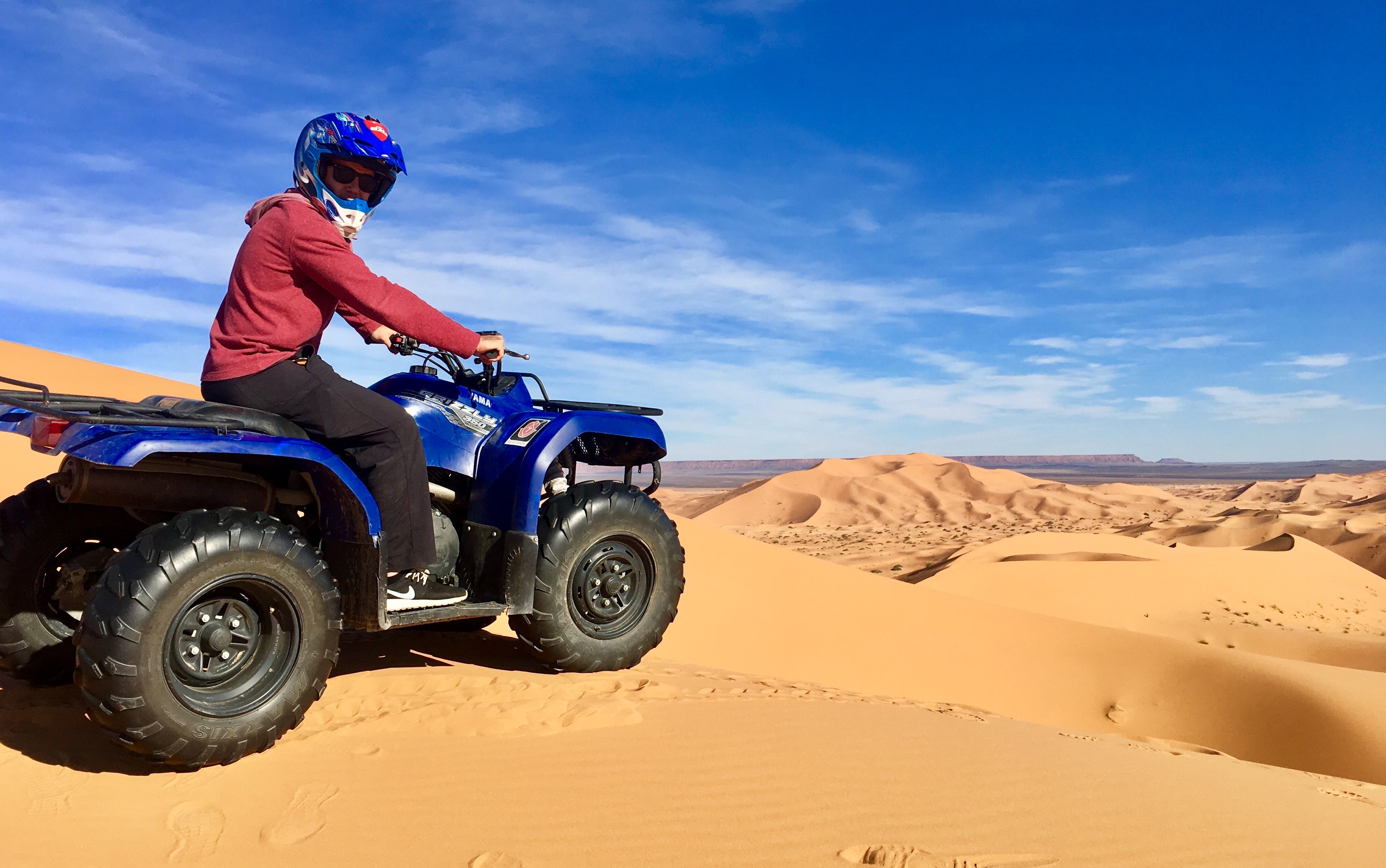 We capped off the day by taking a sunset camel ride with a group of other guests from the camp. The trek began from the tents and finished at the top of one the highest dunes in the area. The sunset was out of this world and something I’ll never forget. That night, the sky was crystal clear which led to a spectacular display of stars, probably the best I’ve ever experienced. Is there a better place in the world to see stars than from the middle of the desert? 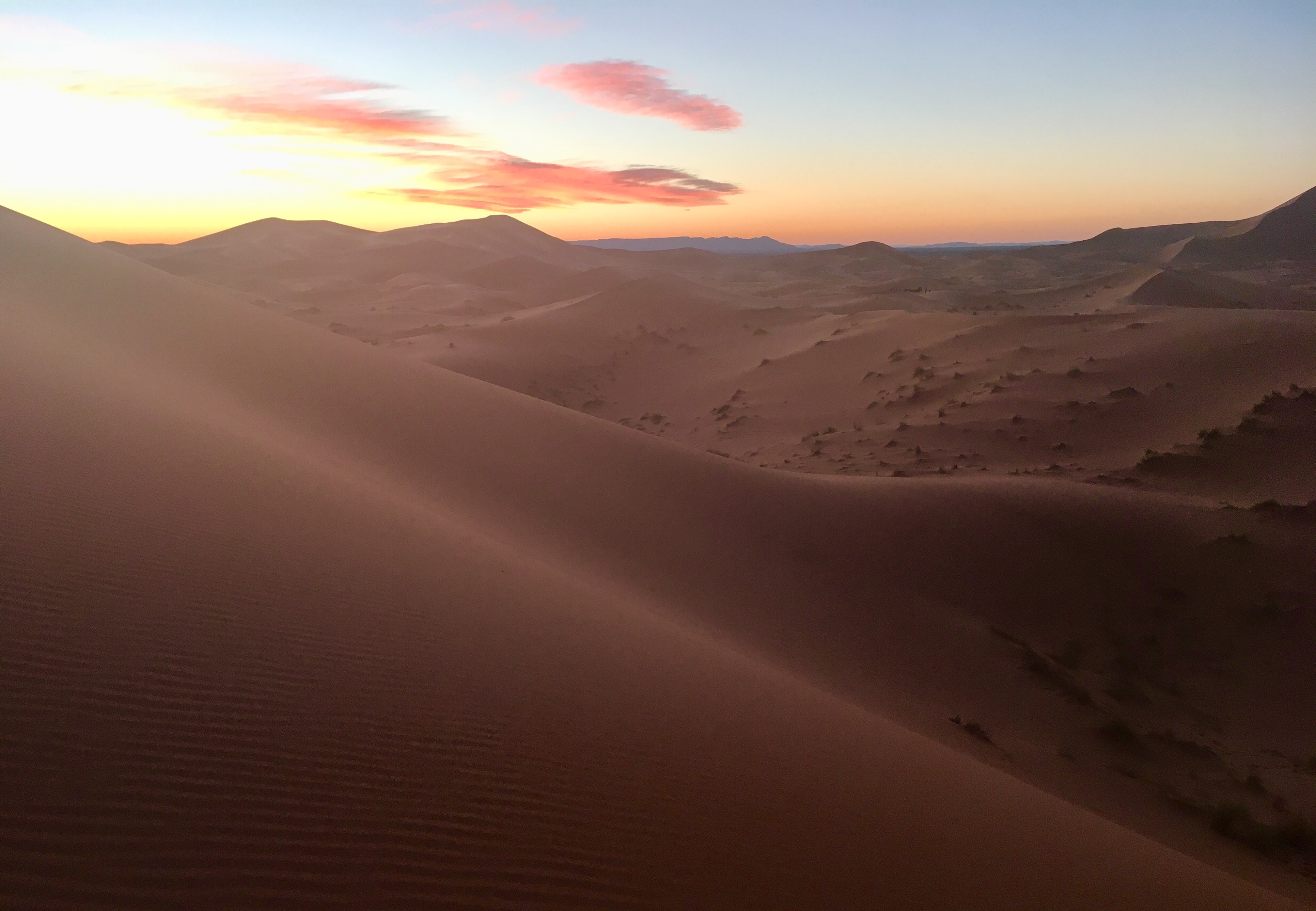 The landscape changed quickly as we made our way toward Tinghir the following morning. The drive took about three hours and, for the third day in a row, we had essentially perfect weather. We stayed that evening at Auberge le Festival Todra, an eco-friendly boutique hotel carved into the walls of the incredible Todra Gorge. The accommodation had ‘tower’ rooms and ‘cave’ rooms. We opted for the latter and, although air conditioned and kitted out with all modern facilities, still felt as though we had traveled a few hundred years back in time. Around the hotel are fantastic hiking trails, which occupied us for the majority of the day. The Todra Gorge is a 24-kilometer (15-mile) series of limestone river canyons. The height of the canyon walls vary but in some areas are as high as 400 meters (1,300 feet). It is a gorgeous site and ideal stopping point when traveling between Merzouga and Marrakesh. 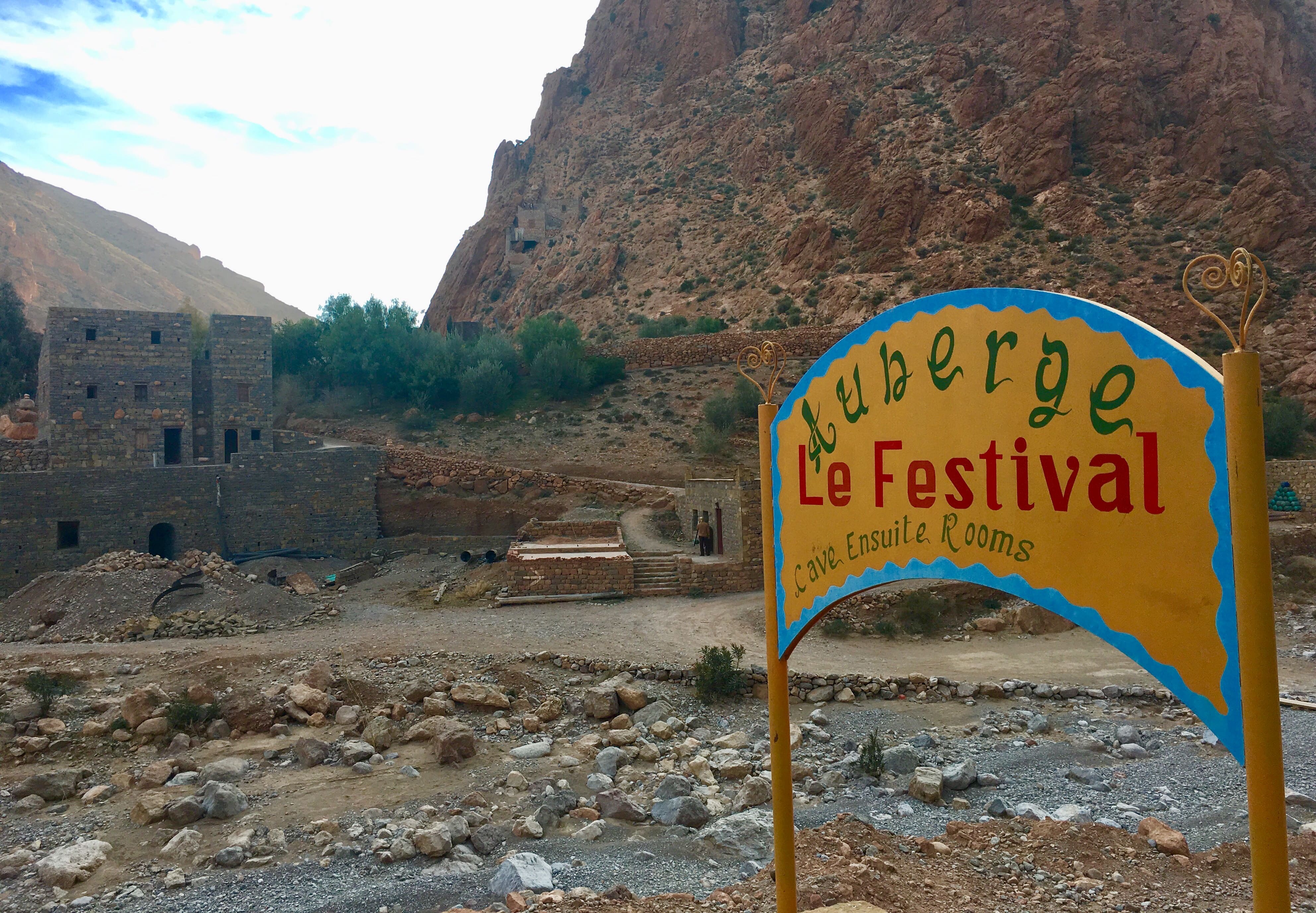 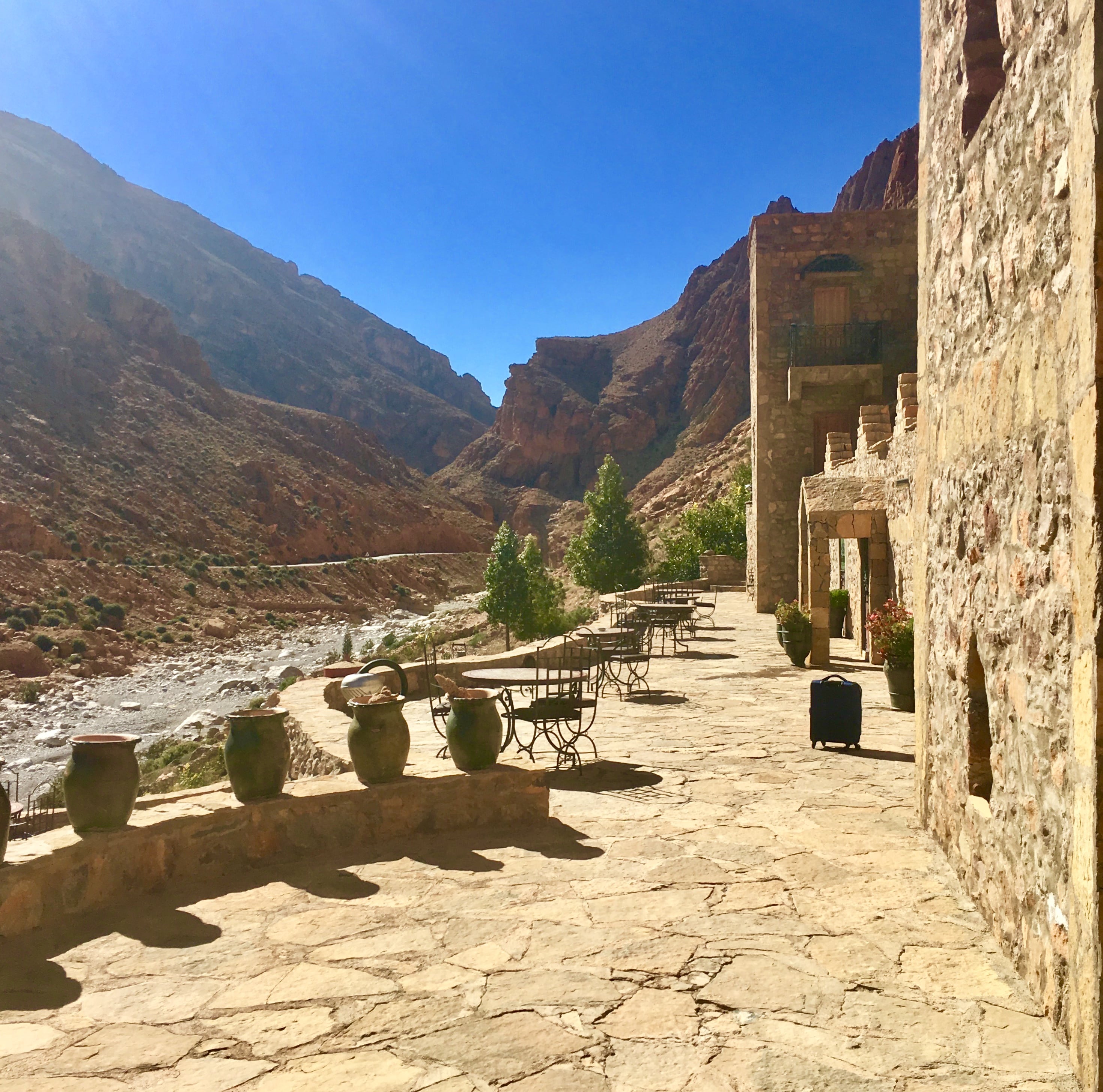 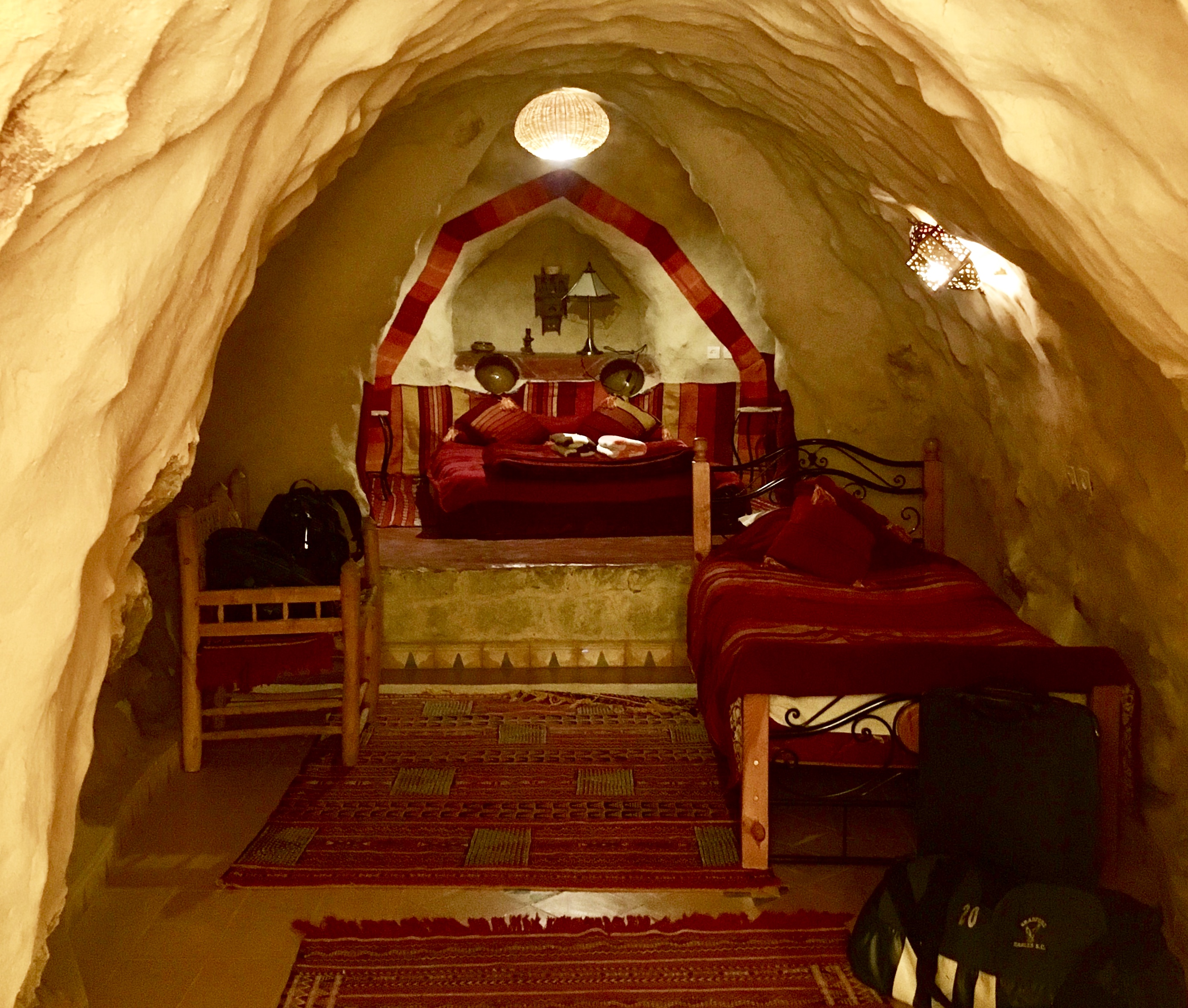 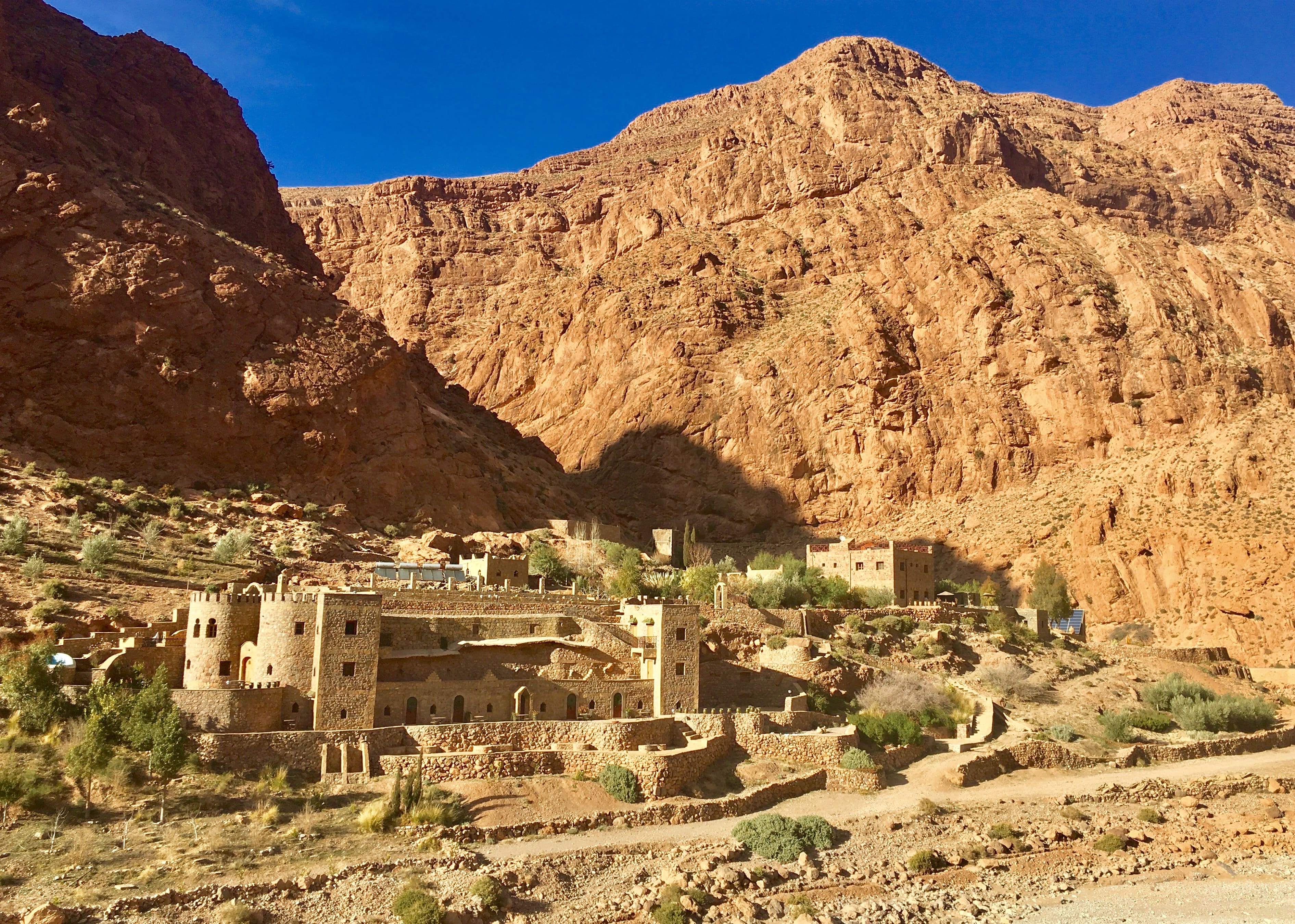 The landscape threw another curve ball the next day as we set out on the seven-hour trip to Marrakesh. We passed through the heart of the snowcapped Atlas Mountains on a steep and winding highway. It felt as though we had gone from the Sahara Desert to the Grand Canyon to Austria in 24 hours. 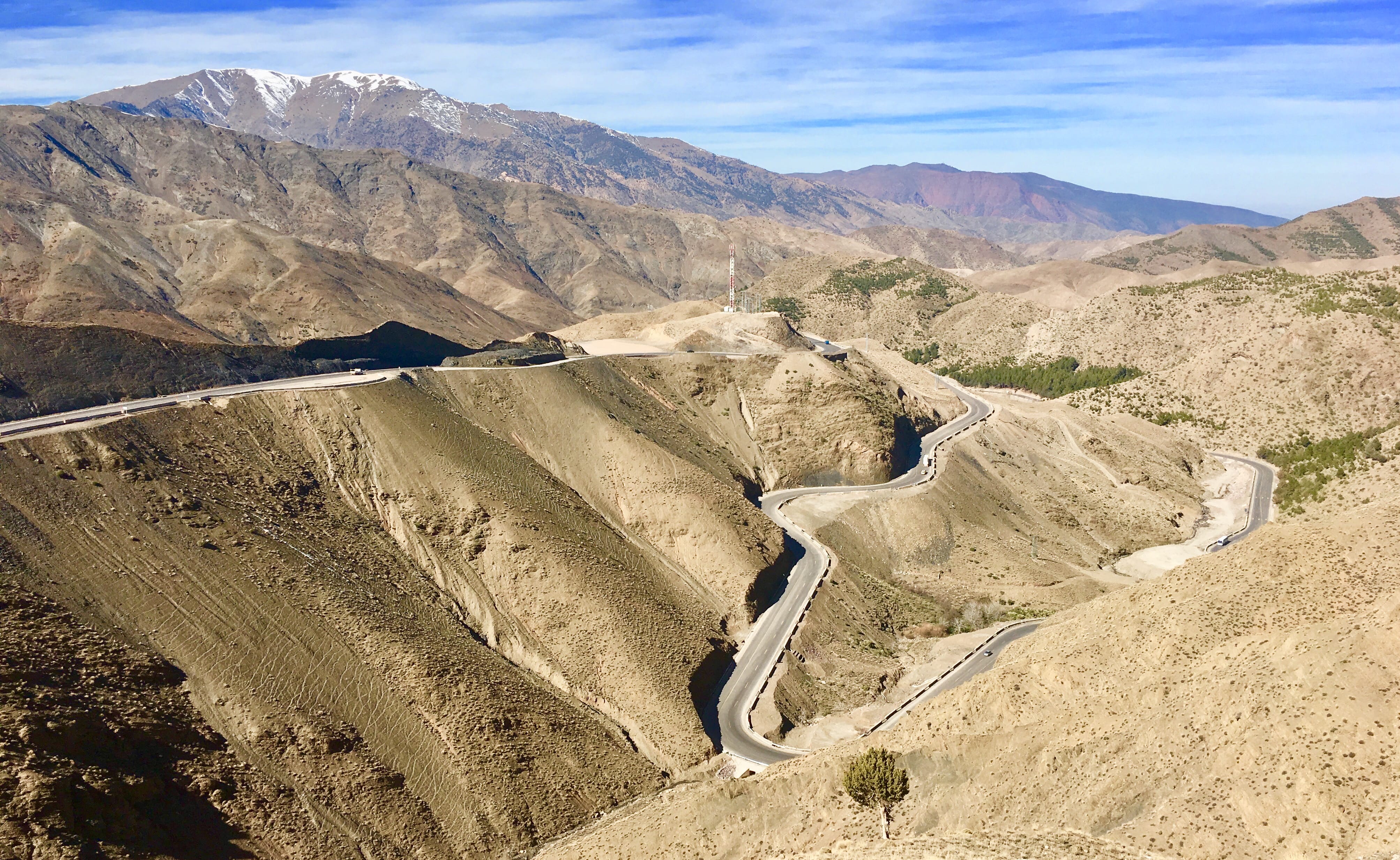 We spent that evening and most of the following day in Marrakesh. We managed to book one of the last available rooms at the Art Place Hotel & Ryad, an elegant and flawlessly-located hotel on the perimeter of Jemaa el-Fnaa Square and market place. Although Marrakesh is not Morocco’s capital city (Rabat), biggest city (Casablanca) or oldest city (Fez), it reigns as the nation’s most popular tourist destination and most important cultural hub due to a bustling medina and rich Neolithic history. Often called the ‘Red City,’ its beauty frequently represents Morocco to the international community. Exploring the center of town took us deep into the evening. The main square comes to life at night and virtually any item or gadget you can imagine is available for sale somewhere in the area. Of course, all prices are negotiable and bargaining is expected. 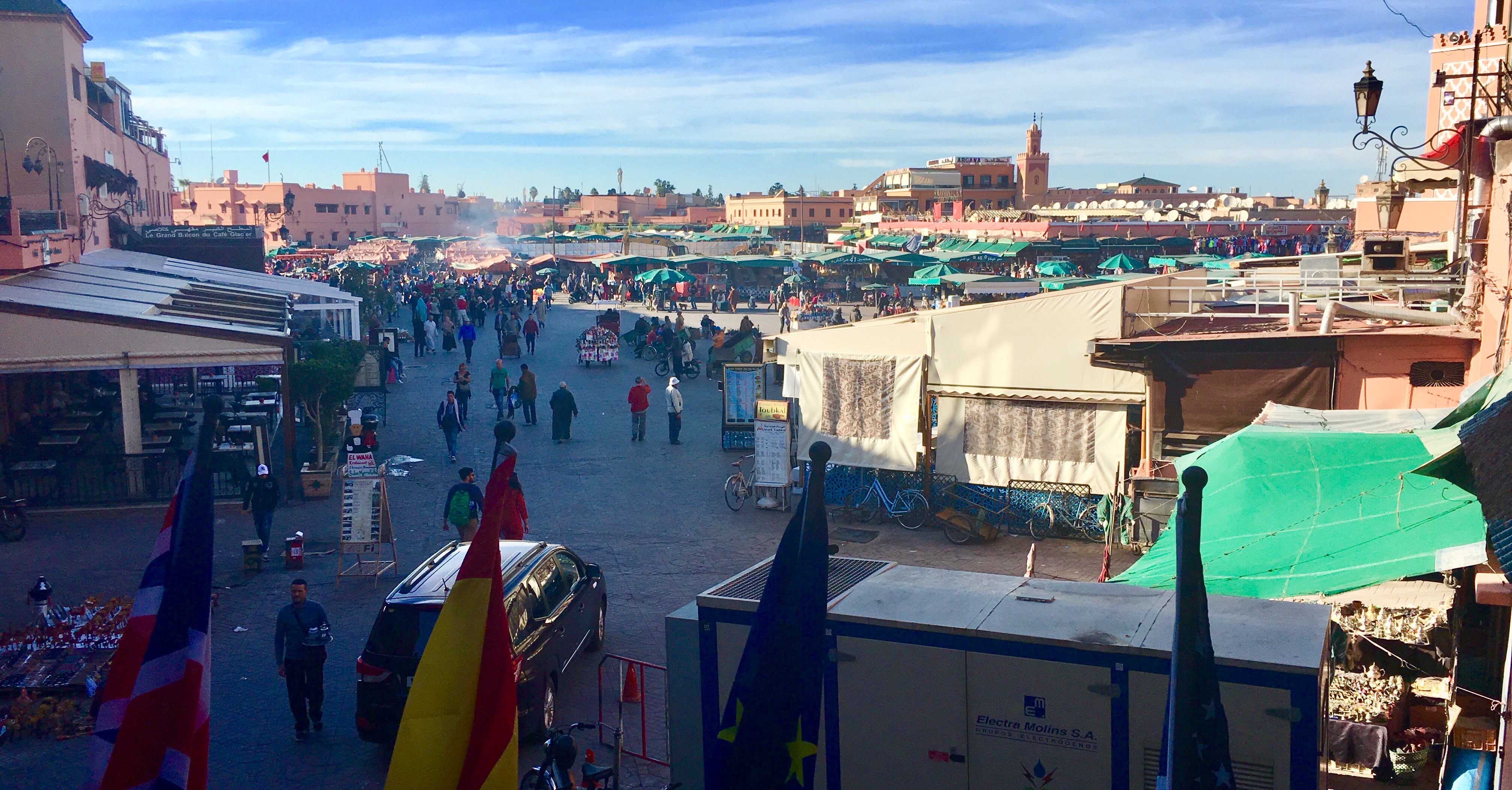 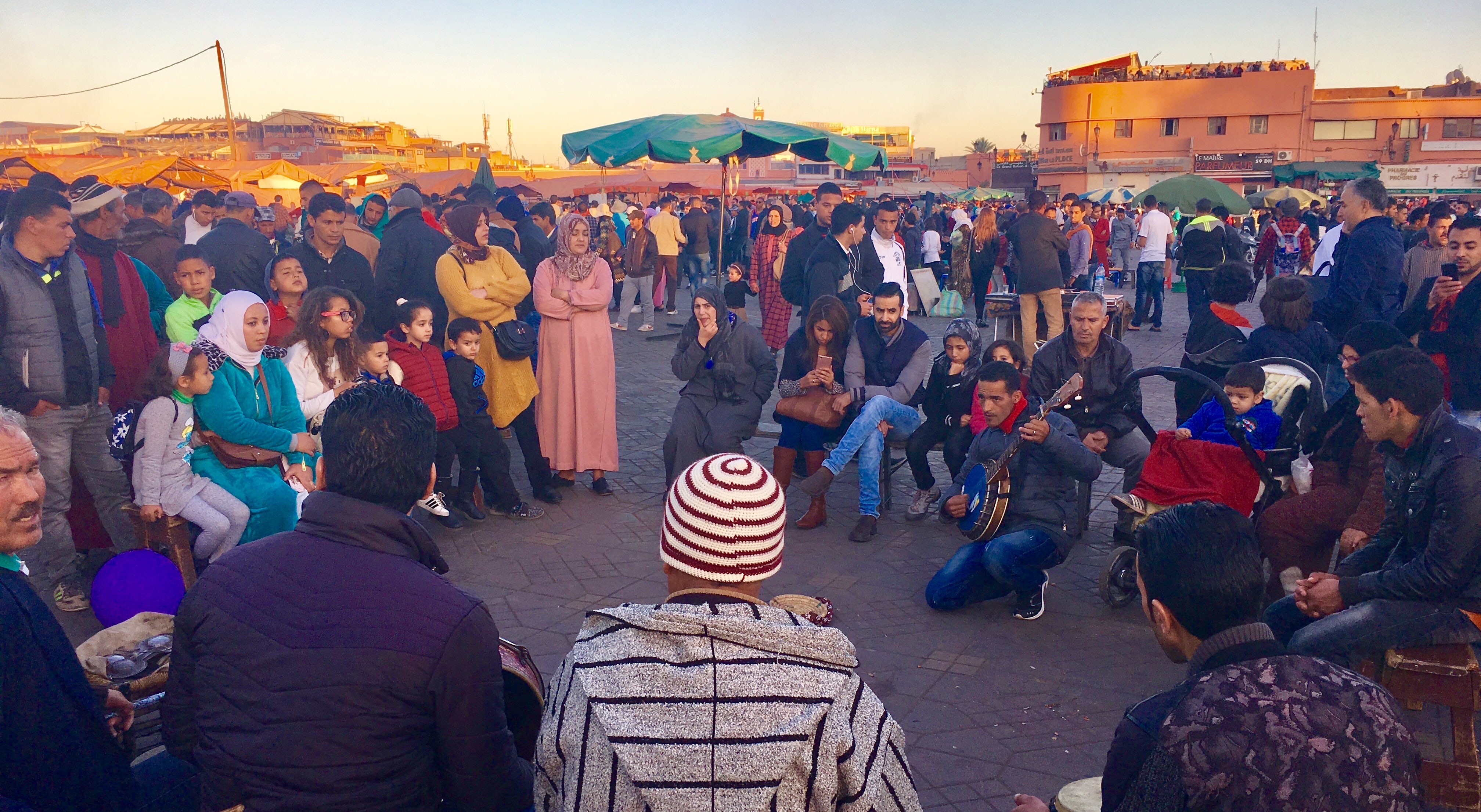 Just beyond the city walls is Majorelle Garden, one of the top attractions in Marrakesh. It is a modestly-sized botanic garden that can be seen in about 30 minutes. The entrance fee is 70 Dirhams (≈ US$7), which is a bit more expensive than several of the other nearby sites. Within the garden is a villa that serves as a Berber Museum and café. It costs an additional $3 and contains traditional Berber artifacts. Having spent the previous couple days in the desert provided some context for much of what was on display. 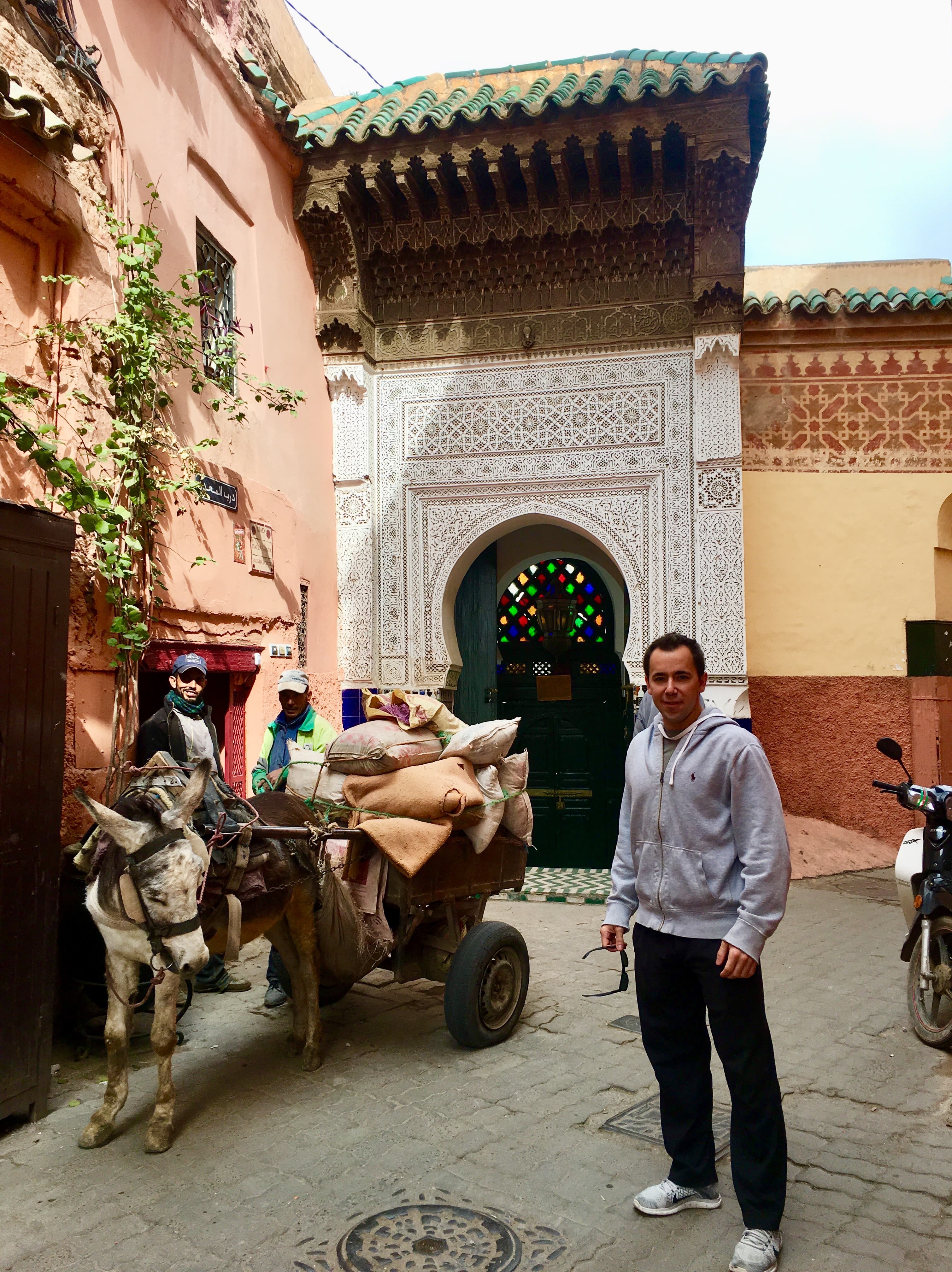 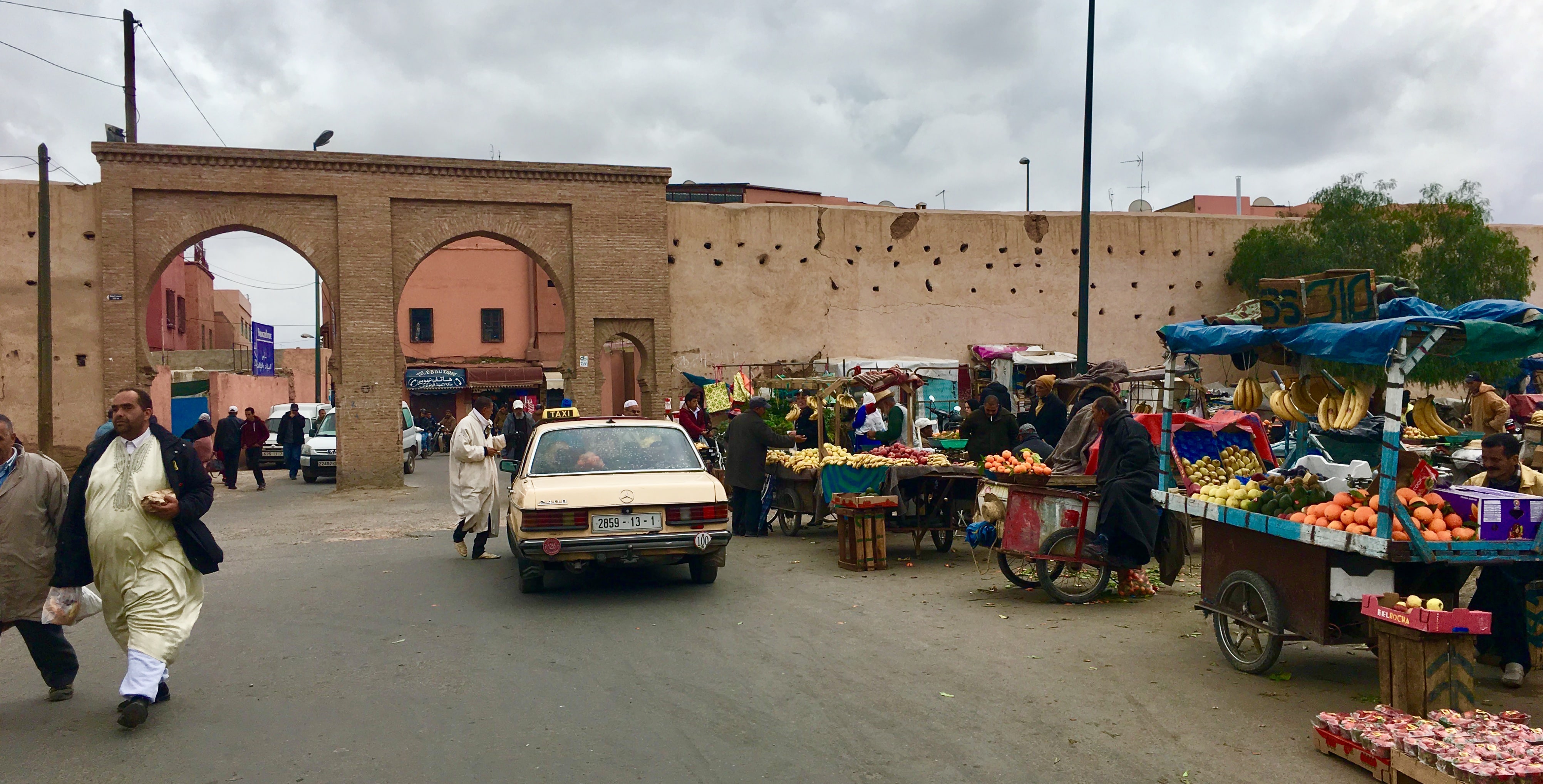 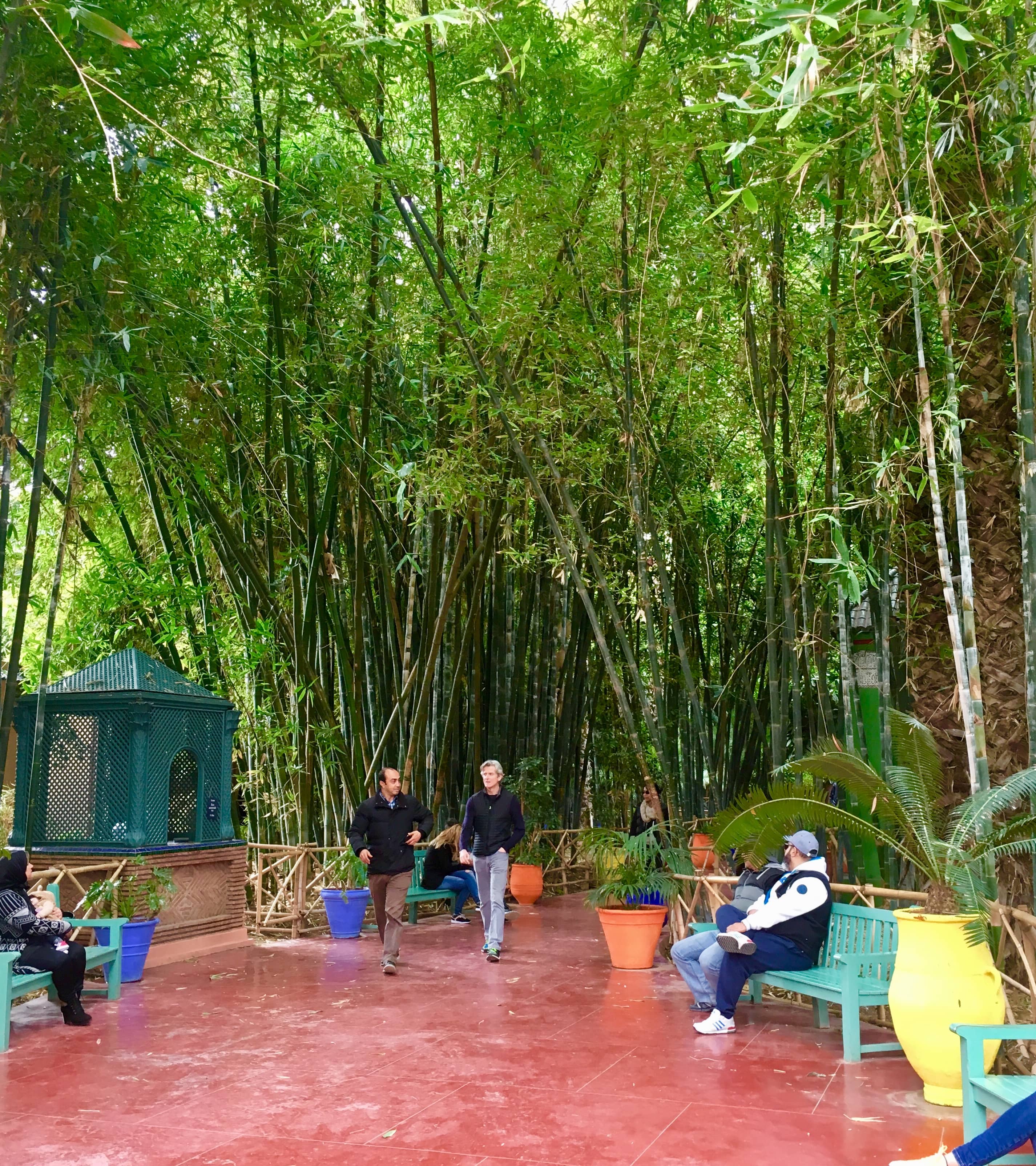 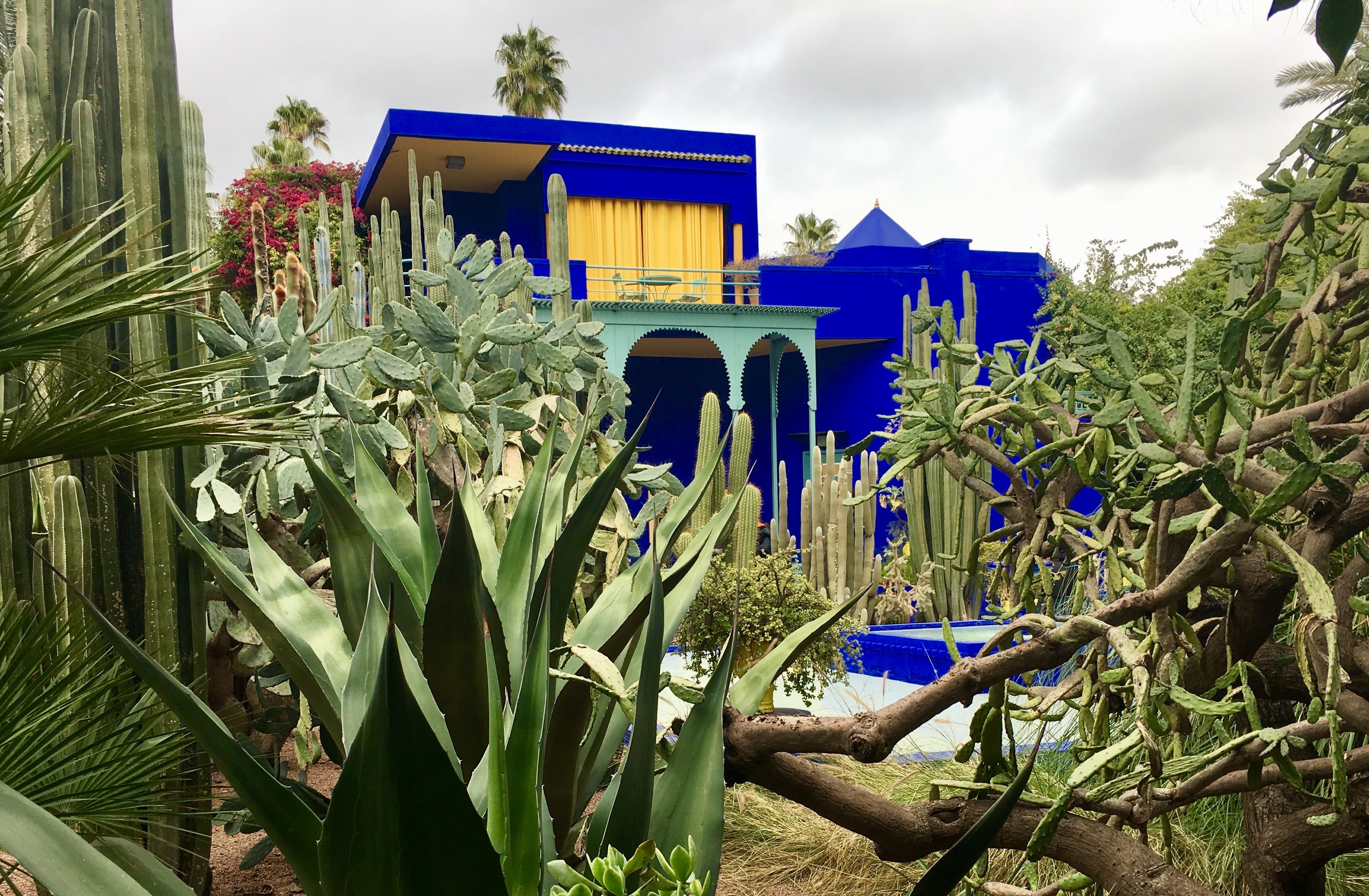 We capped off our trip with a traditional Moroccan Hammam (or bath) at Les Bains de L’alhambra. Although situated in the heart of Marrakesh, the spa lies at the end of a narrow alley and may require some skilled navigation to locate. Inside, it’s clean and relaxing environment catered nicely to foreigners and proved to be a great way to unwind and reminisce on our week-long adventure. 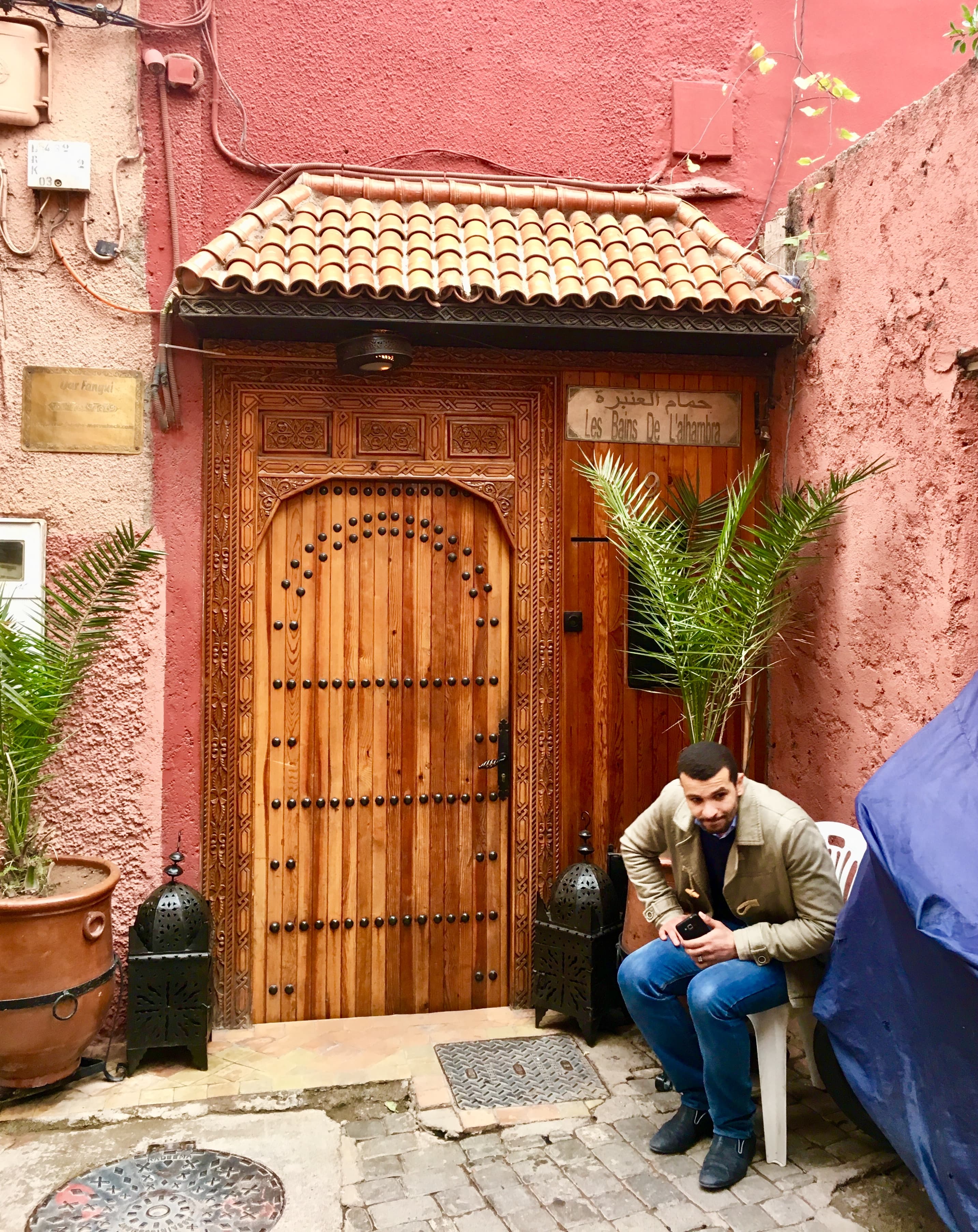 Given our early flights the next morning, we did the three-hour drive from Marrakesh to Casablanca that night directly from the Hammam. Before this trip, I had caught wind of a wide range of questionable Morocco reviews. Several people said that pushy and unfriendly local merchants had soured their experience. It’s true, particularly in Marrakesh and Fez, that they can be aggressive. It was reported to be a dirty country, which is also accurate in regards to some areas. Maybe feedback like this had diminished my expectations making them more easily exceedable, but this trip to Morocco was and remains one of the best I’ve taken. We covered a lot of ground and experienced some of the most rapid and dramatic landscape transitions in the world. Arguably even more interesting is that there is tons we did not see – Tangier, Chefchaouen, Essaouira and the infamous goats in trees outside of Agadir, to name a few. It would also be fun to visit in the summertime when the Atlantic Ocean and Mediterranean beaches come to life. Looking back, we got our main problem (the rental car glitch) out of the way on day one. From there, it was smooth sailing.

I would put Morocco’s abundance of offerings up against that of almost any country. In addition to arriving via plane, it is also accessible by ferry from Spain. A short trip to Tanger-Tetouan-Al Hoceima, Morroco’s northern-most region, could be easily looped in with a trip to Malaga or Seville. Trains and guided tours are an economical alternative to a rental car and have established transportation networks throughout the country. Regardless of how you make it work, I find it hard to believe you would regret the effort.

Have you been to Morocco? What is your best memory?