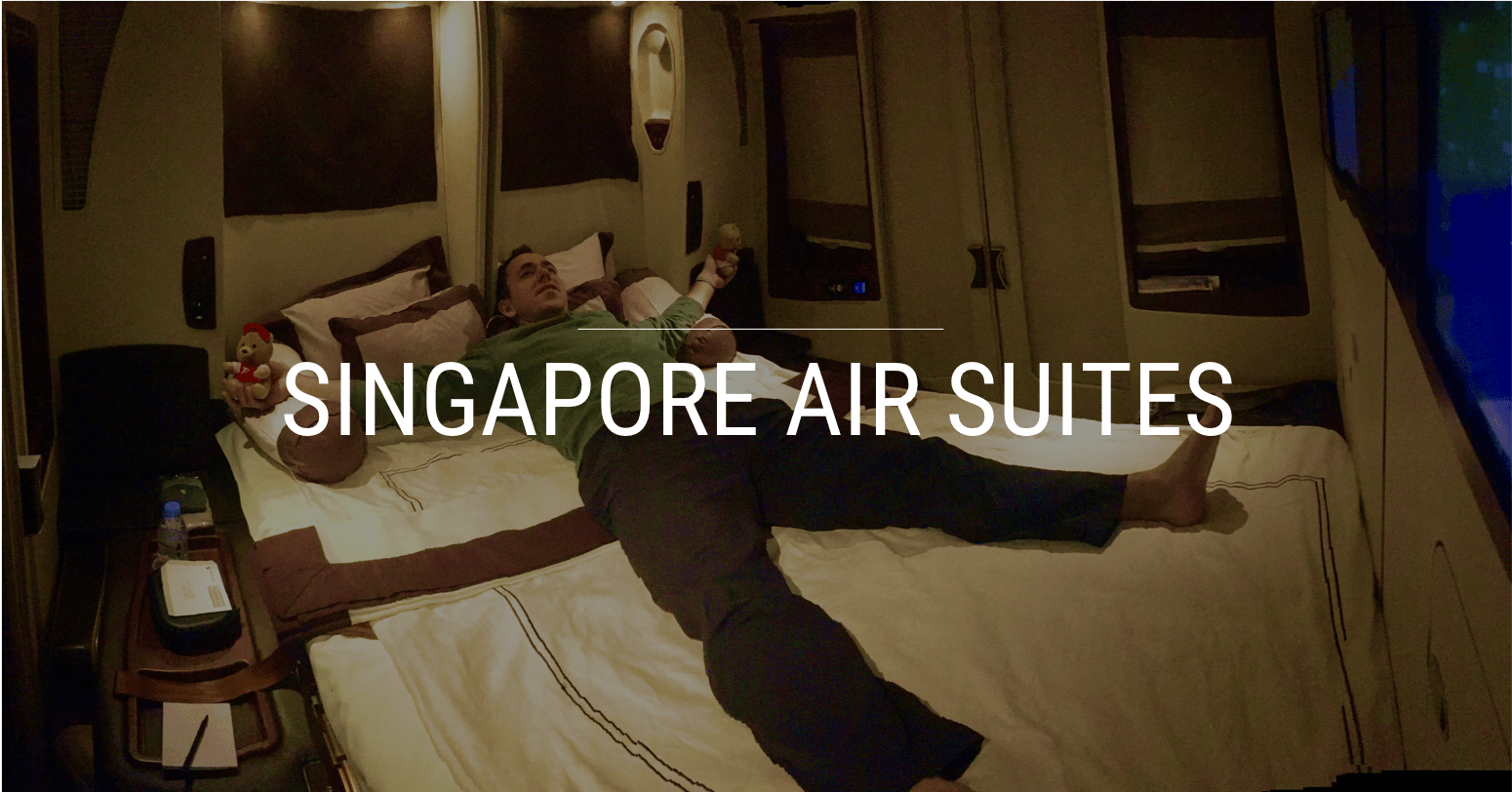 | 🇨🇳 🛩 🇸🇬| Singapore Airlines is routinely rated the best in the world. In recent years, however, earning that top spot has become increasingly competitive, largely due to Middle Eastern, Oceanic and Asian carriers consistently one-upping each other with aircraft amenities such as on-board showers, double beds and reclining swivel chairs. On the ground, I’m as low maintenance of a person as you will find – I can sleep anywhere, eat anything and am the self-proclaimed go-with-the-flow king. That said, in the air, I can be a bit of an ‘AvGeek.’ I like knowing exactly what type of aircraft I am flying and finding ways to squeeze every last perk out of the airlines and their in-flight service. I’ve lived in Singapore for the past six years and can honestly state that Changi Airport and SQ’s superior hospitality is a meaningful reason I have remained on the little red dot for over half a decade.

In mid-November 2017, I experienced the height of SQ’s offering when I flew from Beijing to Singapore in an A380 first class suite. In lieu of purchasing the ticket for an outrageous dollar amount, I channeled my inner Brian Kelly and locked it in by converting credit card points to Kris Flyer miles. I accrued points with the DBS Altitude Visa, a card that is issued directly by my bank in Singapore. Other cards, such as the well-known Chase Sapphire Preferred and Reserve, offer more enticing travel perks, particularly regarding annual fees and airport lounge access, but in my case, the DBS Altitude did the trick. All said and done, the conversion rate comes out to approximately $1 = 2 miles, but varies for overseas transactions. Converting from DBS points to KrisFlyer miles triggers a S$25 fee.

One of my biggest challenges was finding a flight that wasn’t ‘waitlisted.’ Unless you have PPS status with SQ, it’s rare for a waitlisted ticket to be confirmed. This was tricky because my preference was to fly in the suite on a long-haul flight – LAX, NYC, anywhere in Europe – but every one of them was waitlisted. So, even if I saved 120K miles (for the US) or 90K (for Europe), I would have still struggled to get the seat. What appeared to be most available was Hong Kong (37.5K), Beijing, Shanghai and Narita (all 50K). Sydney (65K) was also available but spotty.

For a couple months, I kept my eye on different schedules and looked for opportunities to loop one of these flights into my travel plans. Although Hong Kong was the most economically attainable, I didn’t feel as though a 3.5-hour flight was sufficient. On the back end of a long-weekend trip to Tajikistan, I managed to route my return flight from Khujand to Beijing via Novosibirsk on S7. I then picked up a one-way, 6.5-hour Suites flight from Beijing to Singapore. In total, I paid 50K KrisFlyer miles + CNY90 (≈ US$14) in taxes for the ticket. Boom, roasted! 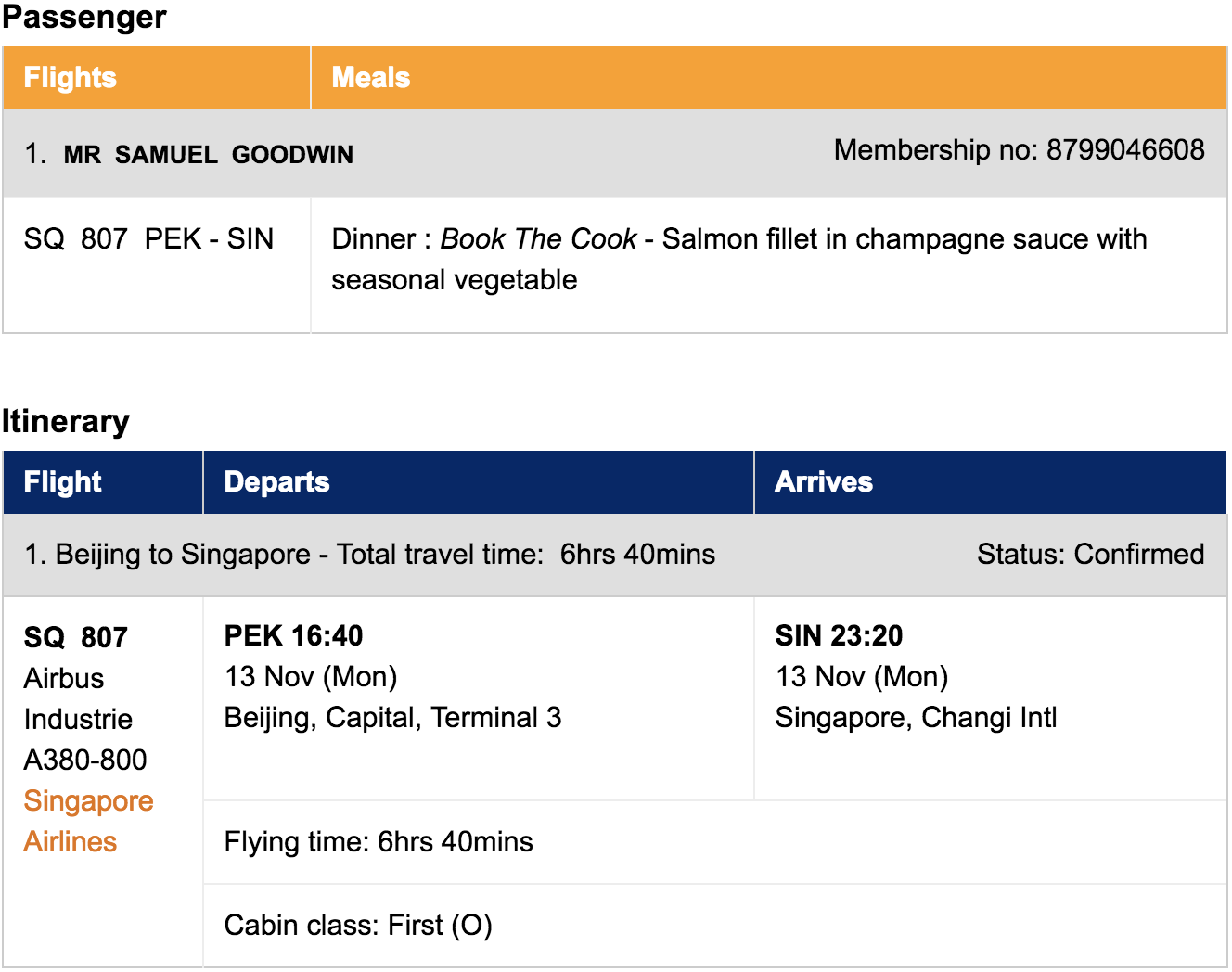 Leading up to the trip, the online seat map appeared to indicate that the Suites class was empty. I was able to digitally select any of 12 seats in the cabin. Through years of traveling and countless seat selection processes, I’ve learned that sometimes the perceived occupancy is far from accurate, a situation that can lead to both upside and downside surprises. When arriving at the SQ check-in counter in Beijing, I asked the representative if the flight was full. She responded, “Mr. Sam, you are the only first class passenger today,” confirming what I had been seeing on their website. Call that a win. I proceeded through security and to the airport lounge, an area that was divided into both business and first class sections. Turning away from a business class lounge for something better puts a lot of things in this world into perspective. 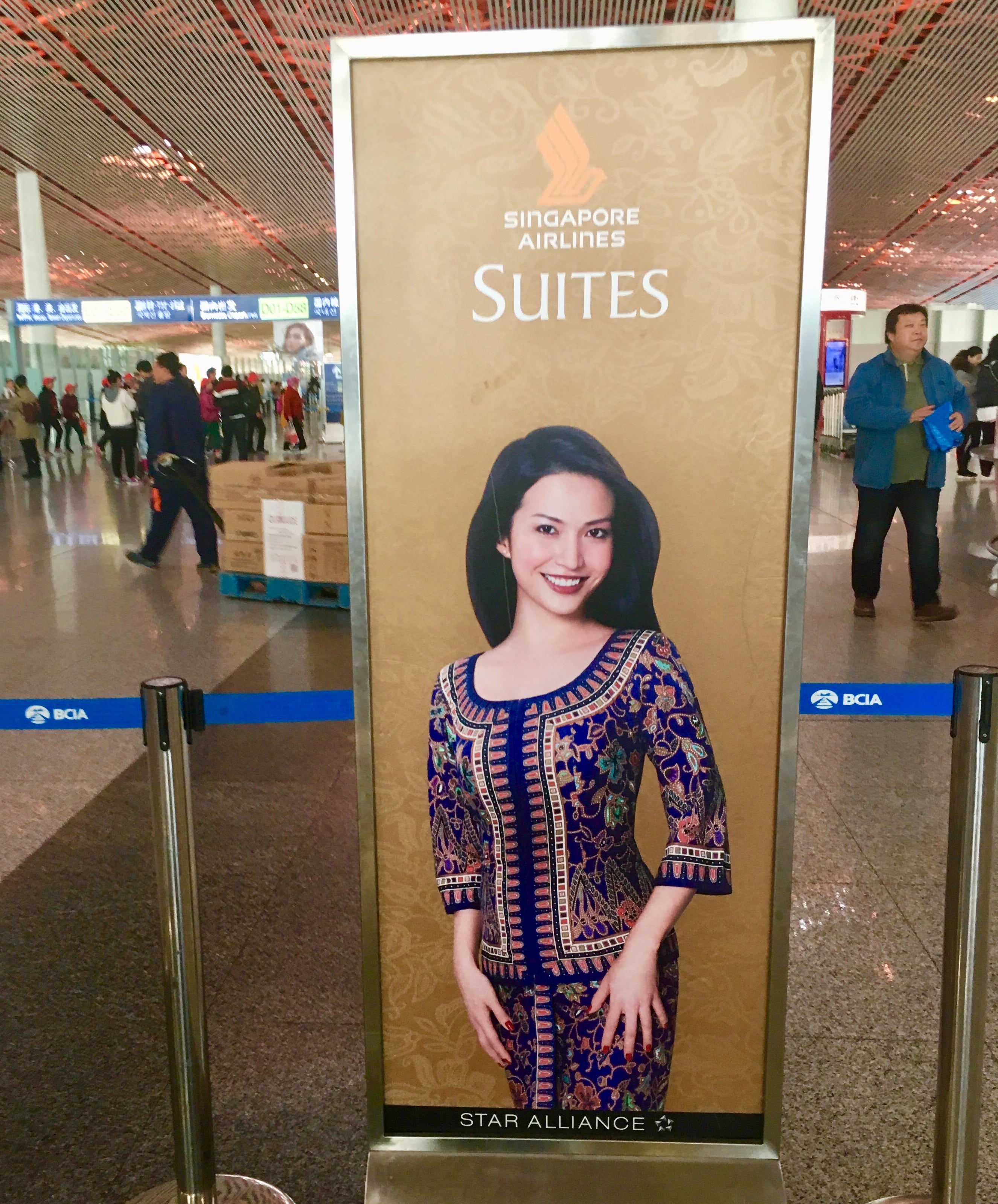 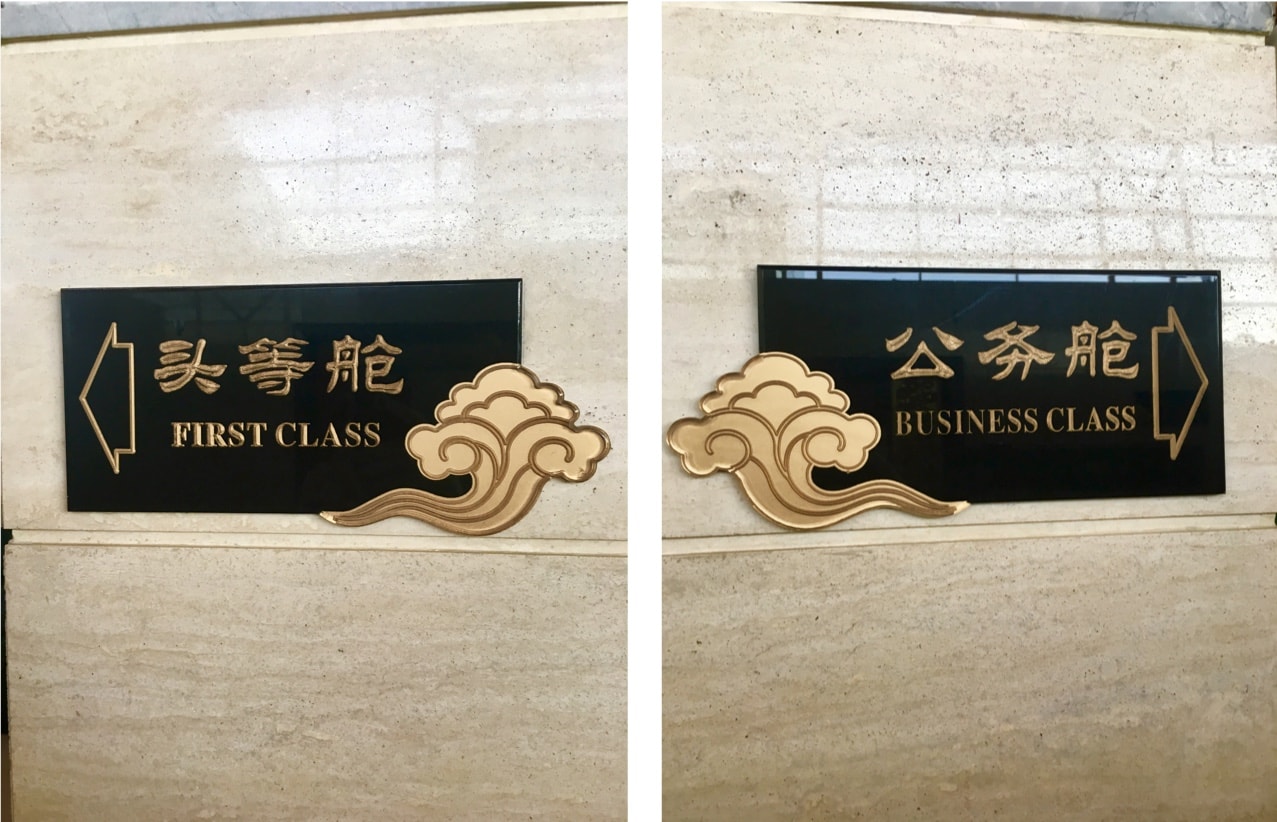 After relaxing in the lounge for 45 minutes, I was told that my flight had entered the final call of its boarding process and that I could head to the gate. Airlines often wait until the last minute before sending passengers in the lounges to the plane. This is to maximize the amount of time they can spend in the lounge while also reducing the congestion they encounter at the gate – all other passengers will already be on board. It was an exciting walk through the terminal. Depending on who you ask, I was about to fly on the best airline, on the best aircraft, in the best first class in the world! 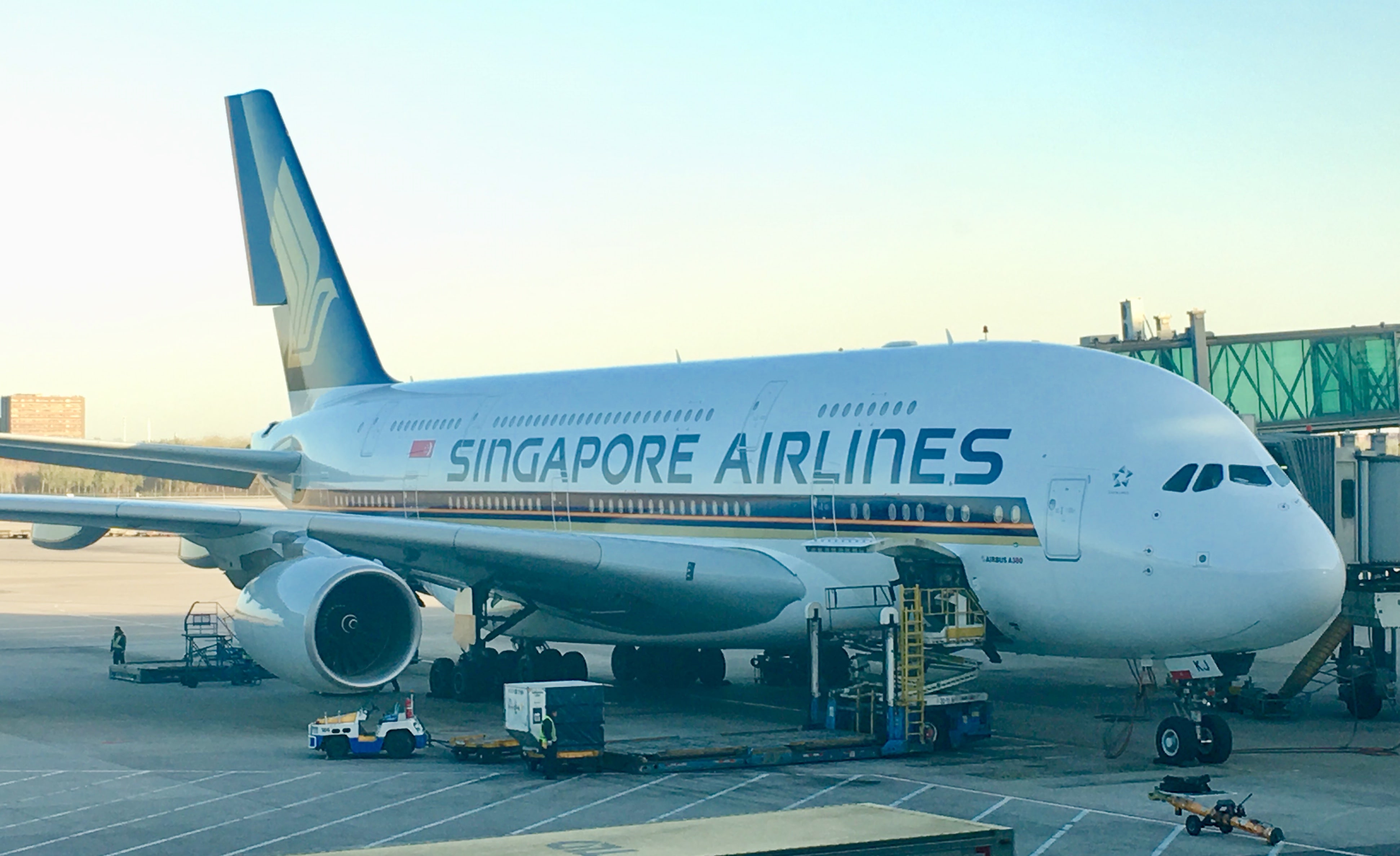 While boarding, the lead flight attendant saw me coming and walked off of the airplane to meet me halfway down the vacant jetway. “Mr. Sam, welcome on board. Today, you have a private jet.” Singapore Air’s Suites were by designed by French luxury yacht designer Jean-Jacques Coste. Each individual cabin features a sliding door, window blinds, a 23-inch TV and is accented with leather and wood finishes. A lounge chair and sizable table make it an ideal setting for a face-to-face business meeting or glamorous dinner for two. I spent the remainder of our time at the gate exploring the cabin, drinking Krug champagne and chatting with the four crew members I had to myself. 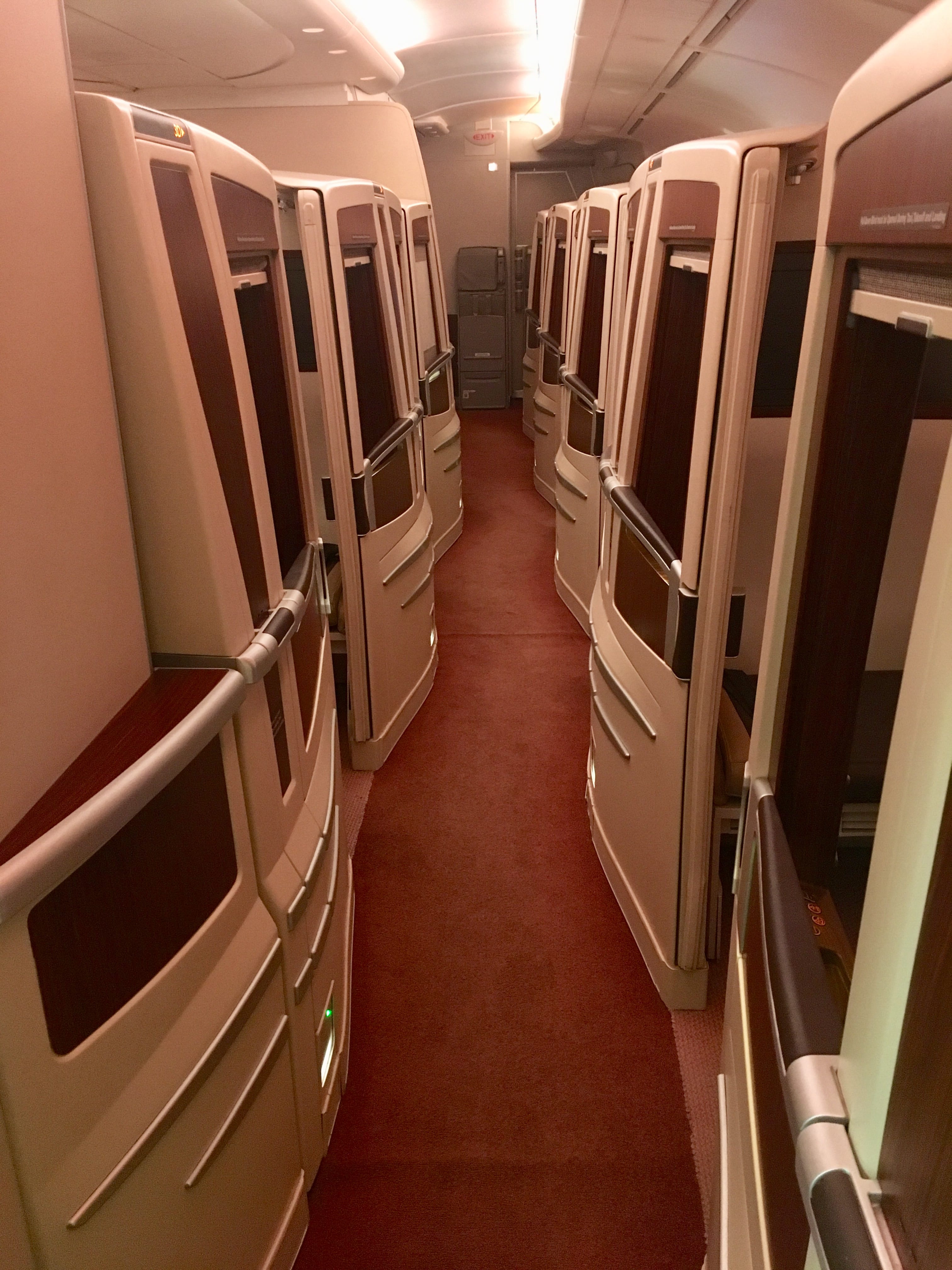 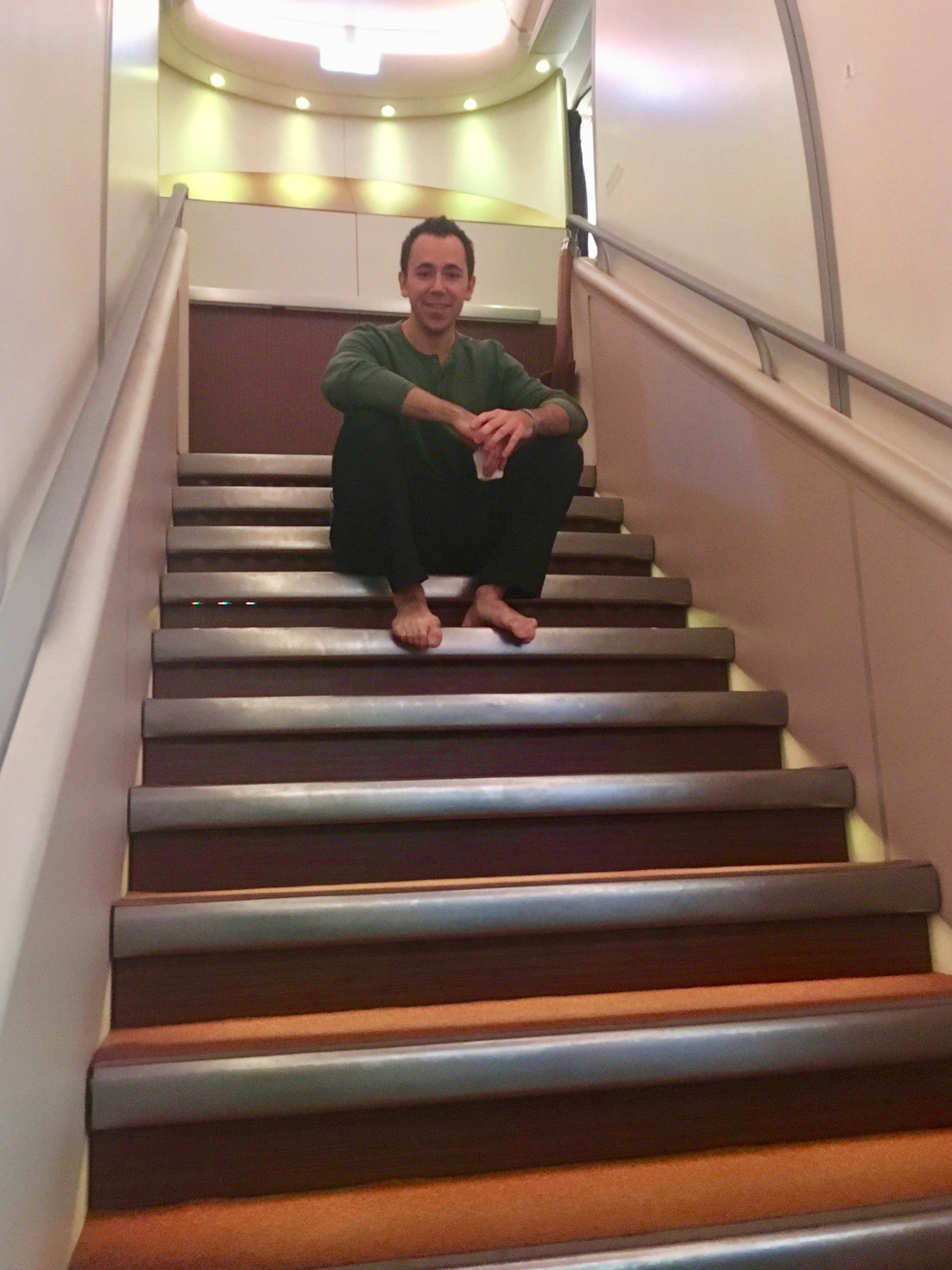 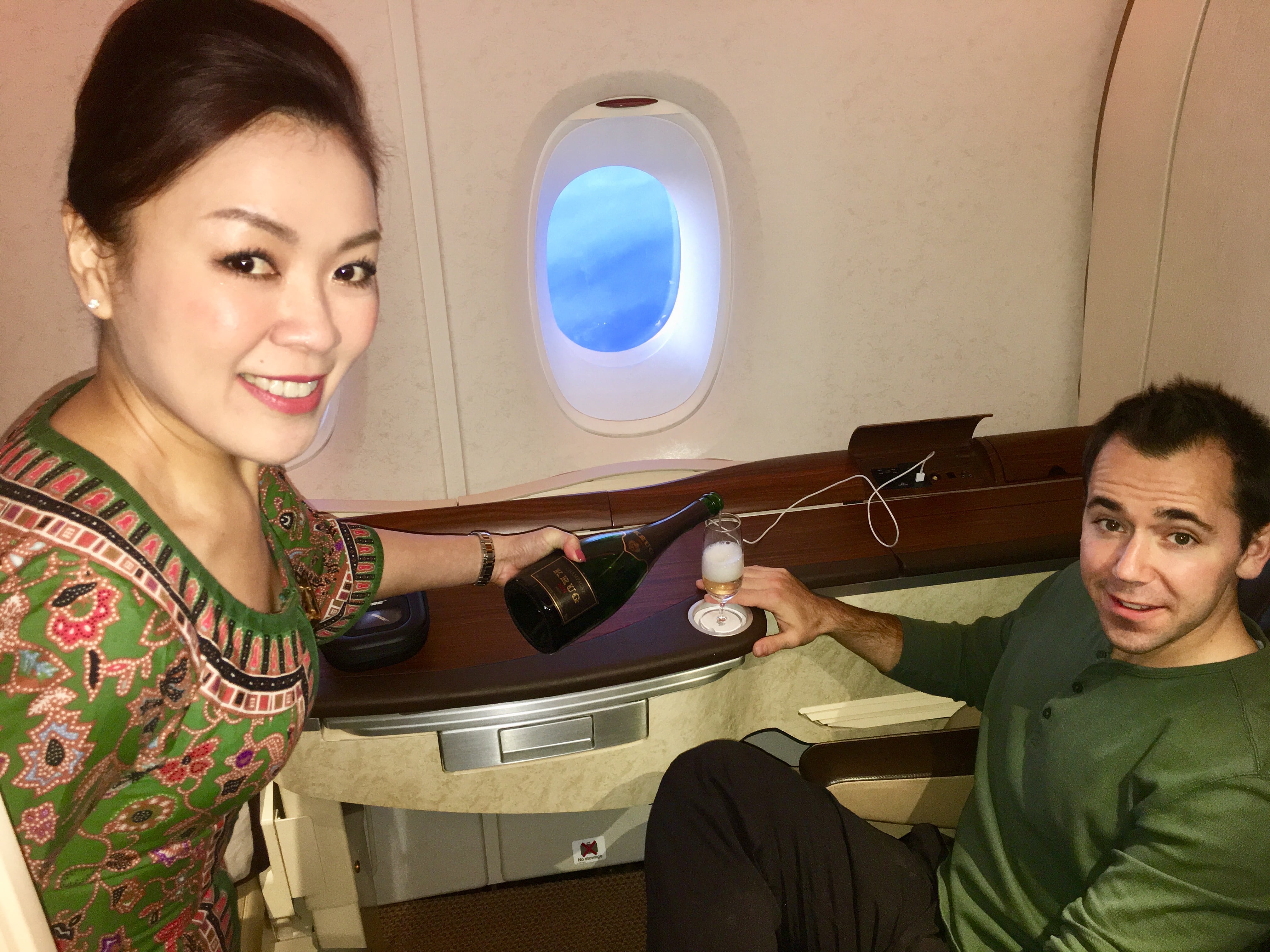 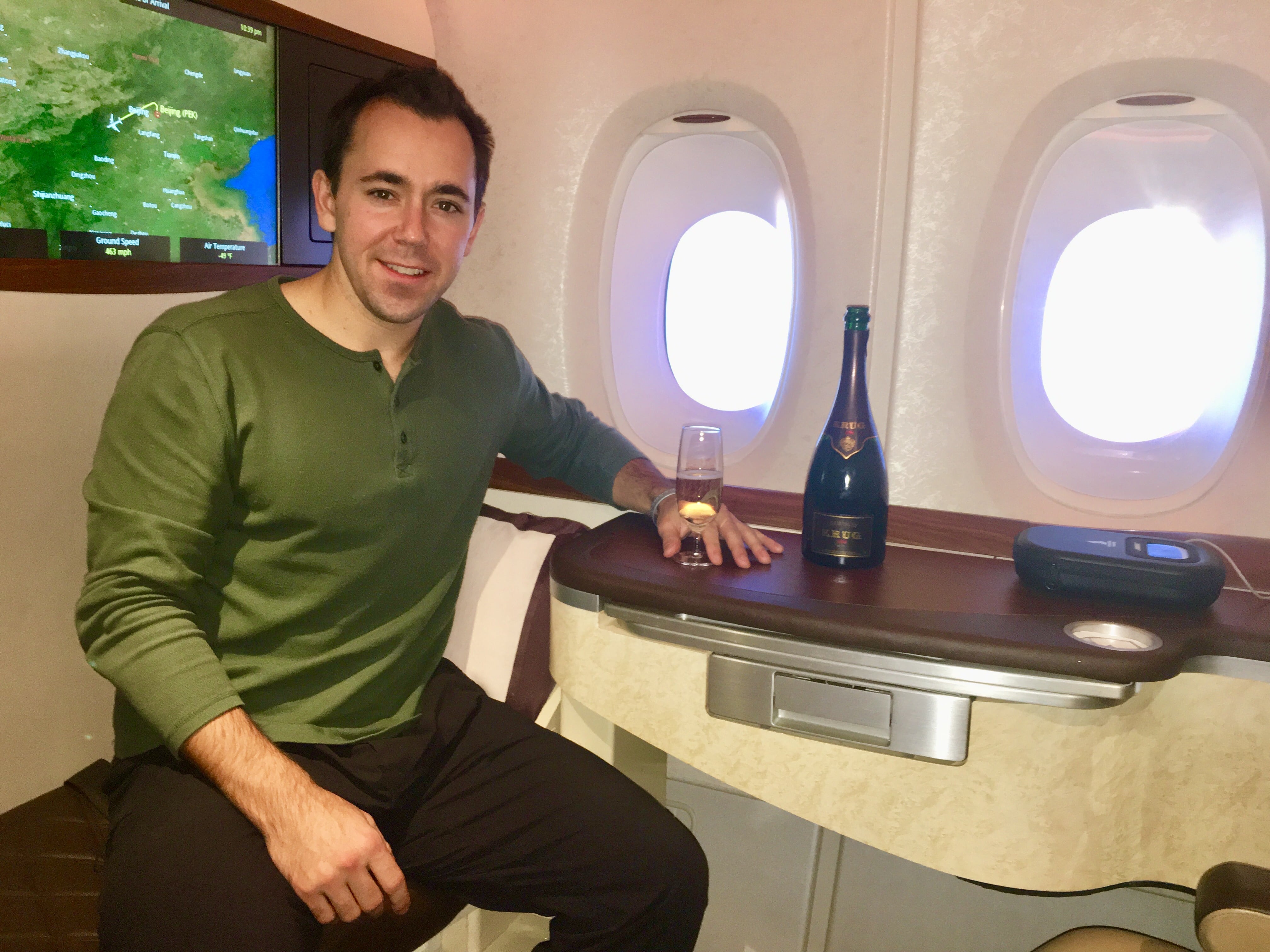 Not that I cared, but we departed Beijing on time. Although the in-flight service was essentially nonstop, my official dinner was served a few minutes after the plane leveled off at cruising altitude. Ahead of the flight, I had chosen to ‘Book the cook,’ a perk SQ offers business and first class travelers. I had selected a salmon filet with steamed vegetables, a meal that proved to be on point but only one course of a seemingly endless stream of food and drinks. For dessert, Joyce, the cabin crew member I spoke most with, suggested I have the business class dessert (ice cream) instead of the suites dessert (a red velvet soufflé). I agreed. She went upstairs and came back with vanilla bean ice cream and mixed fruit. I think I had three bowls. In addition, I was served four different types of cheese, one from Germany, the UK, France and Switzerland. 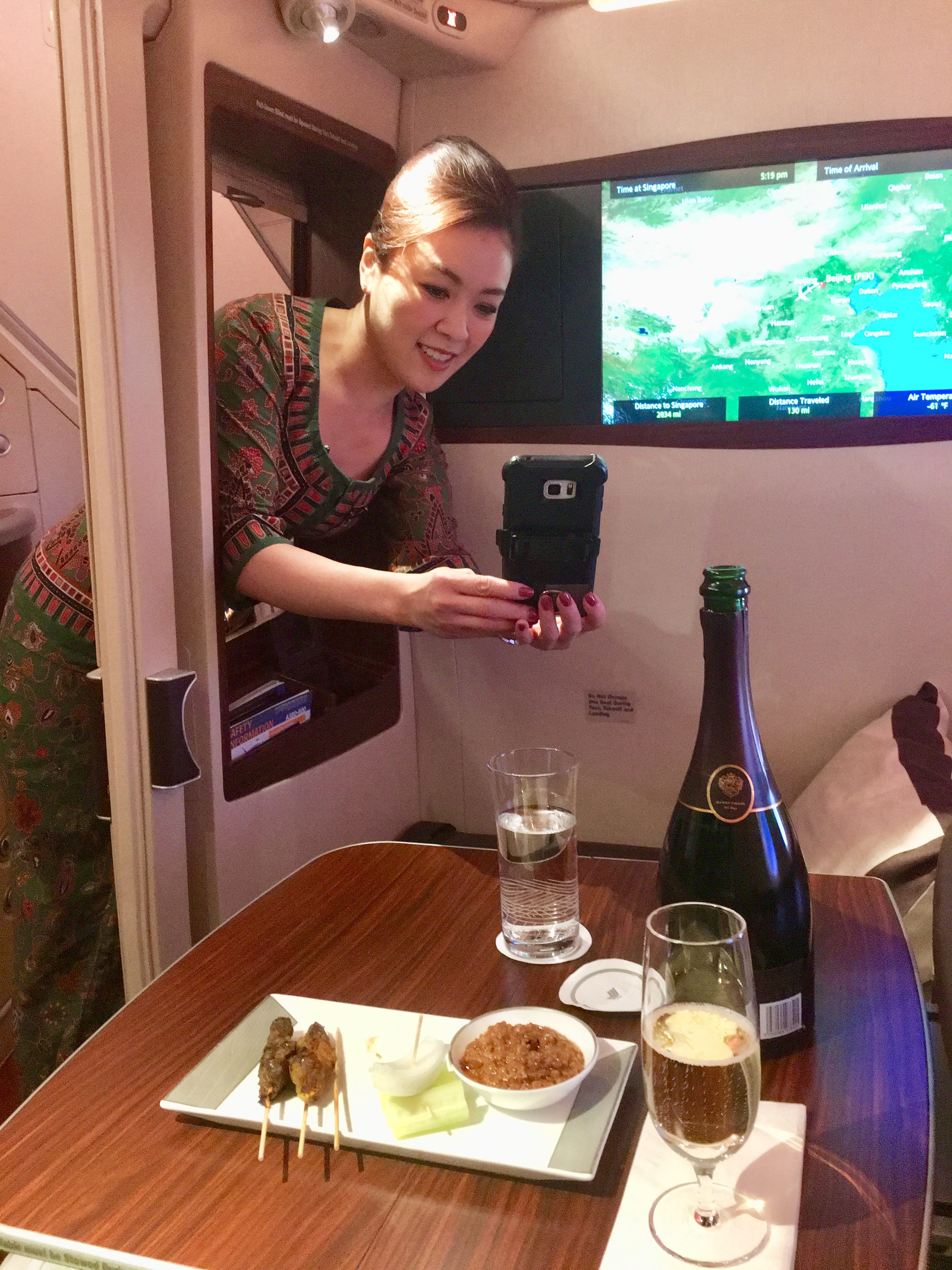 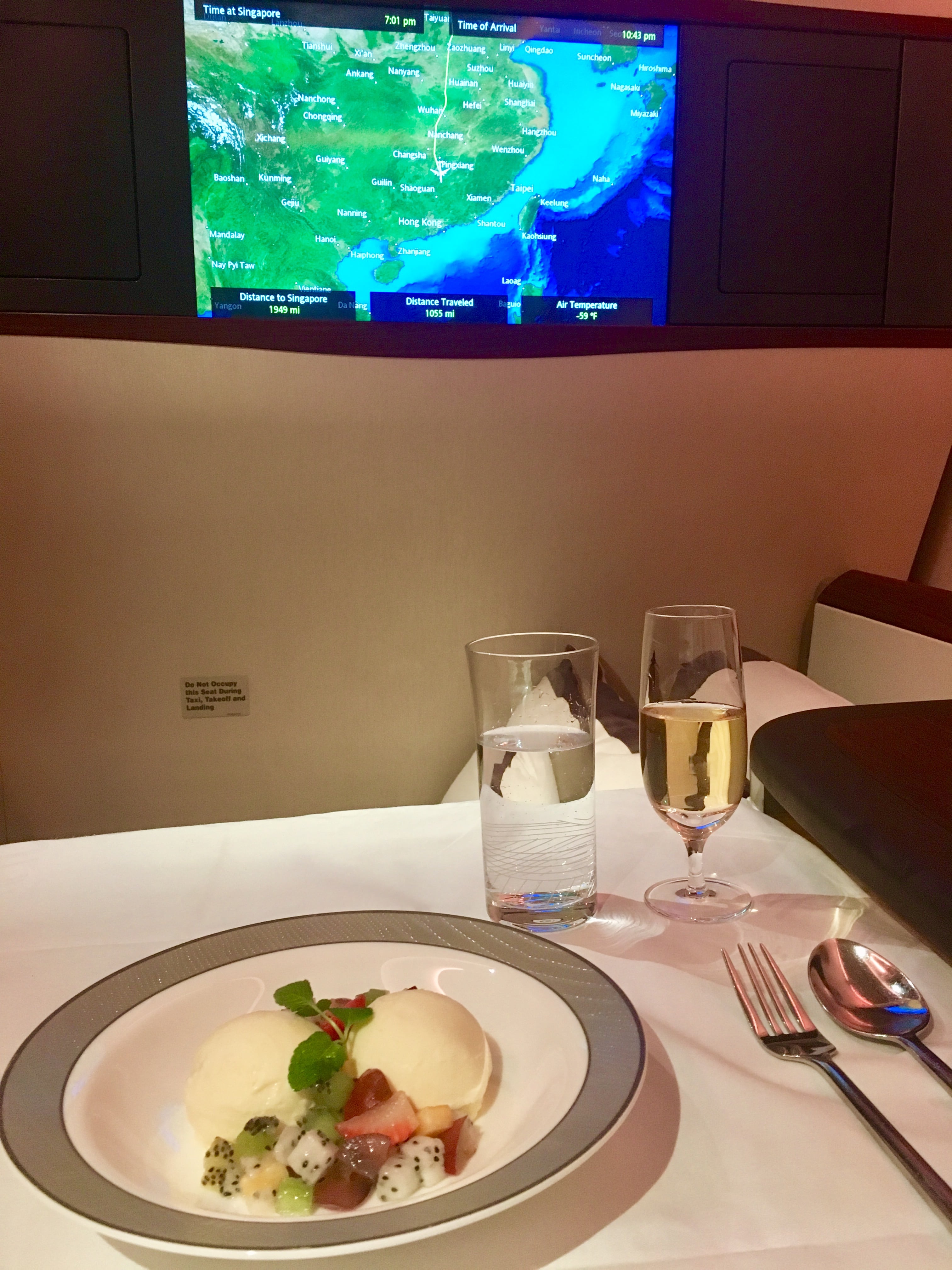 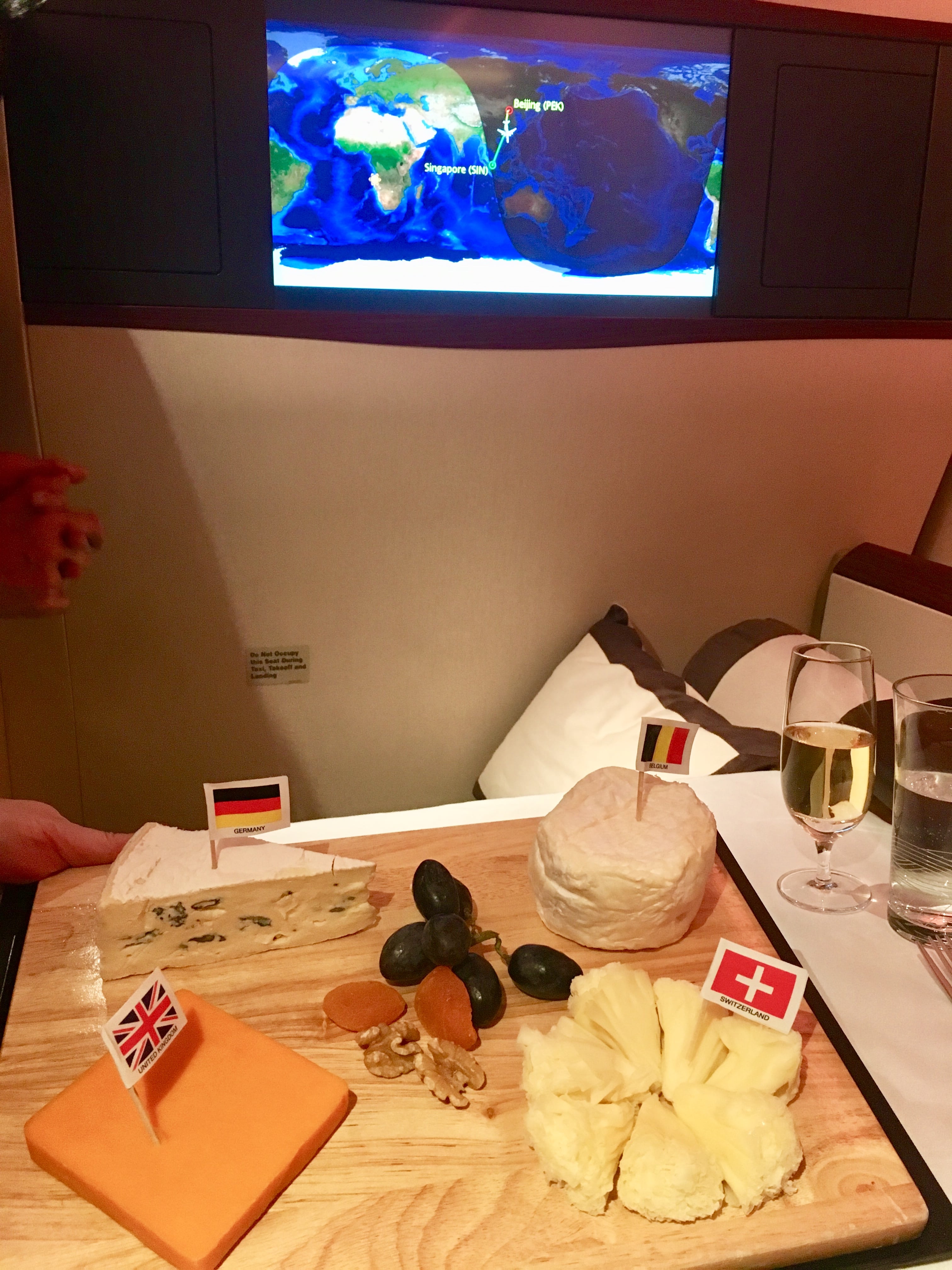 The Suites configuration is 1-2-1. An SQ first class differentiator is that the middle two cabins are adjoining and can be combined to create a lie-flat double bed. At the time of inception, this was the first double bed in the sky, something that appeals to couples and parents with children. In addition, other first class passengers can take advantage of this feature if the suites are unoccupied. In my case, I could have had two of them and wasn’t going to miss this opportunity. Following dinner, I observed Joyce and another crew member convert two of the middle cabins into my bed. 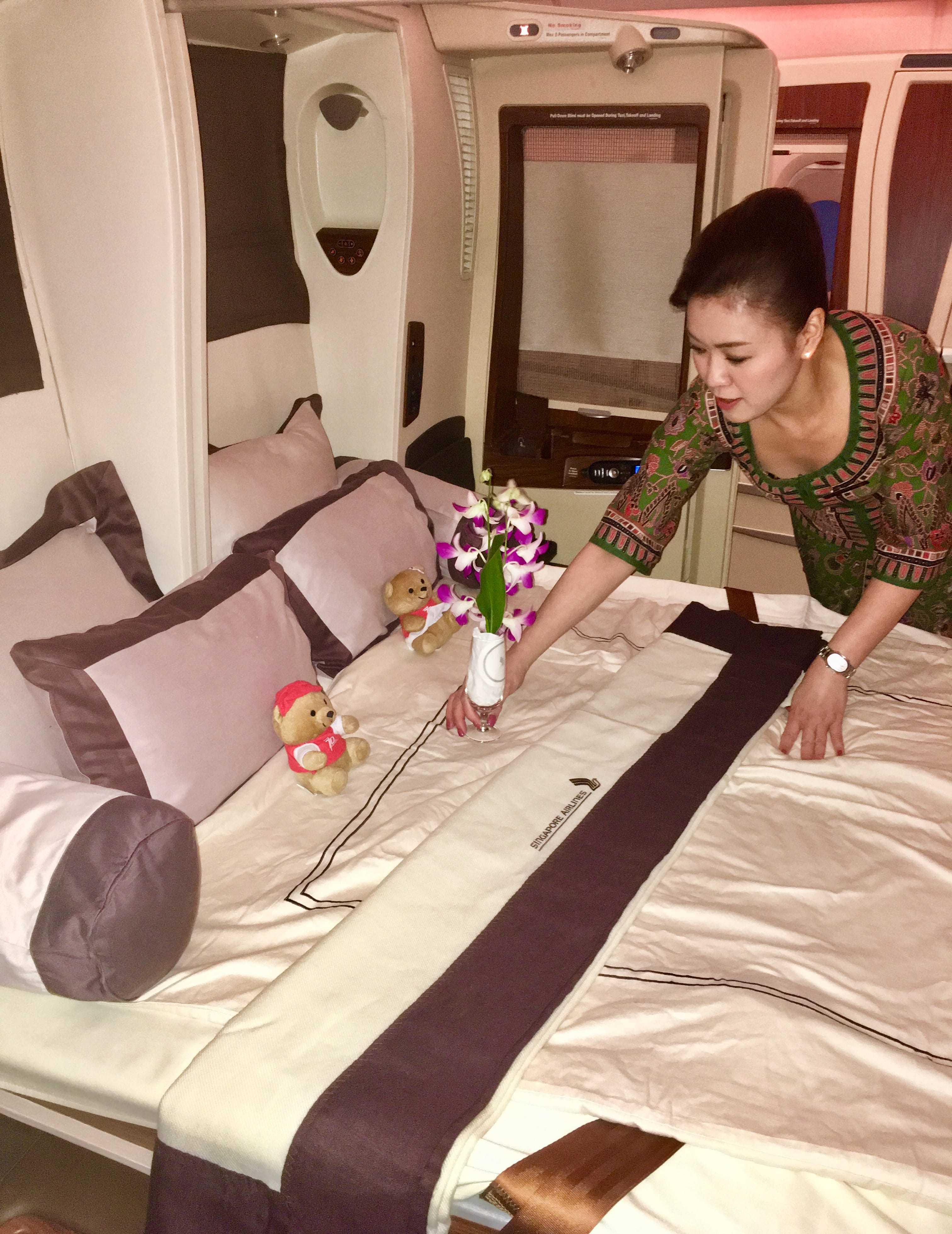 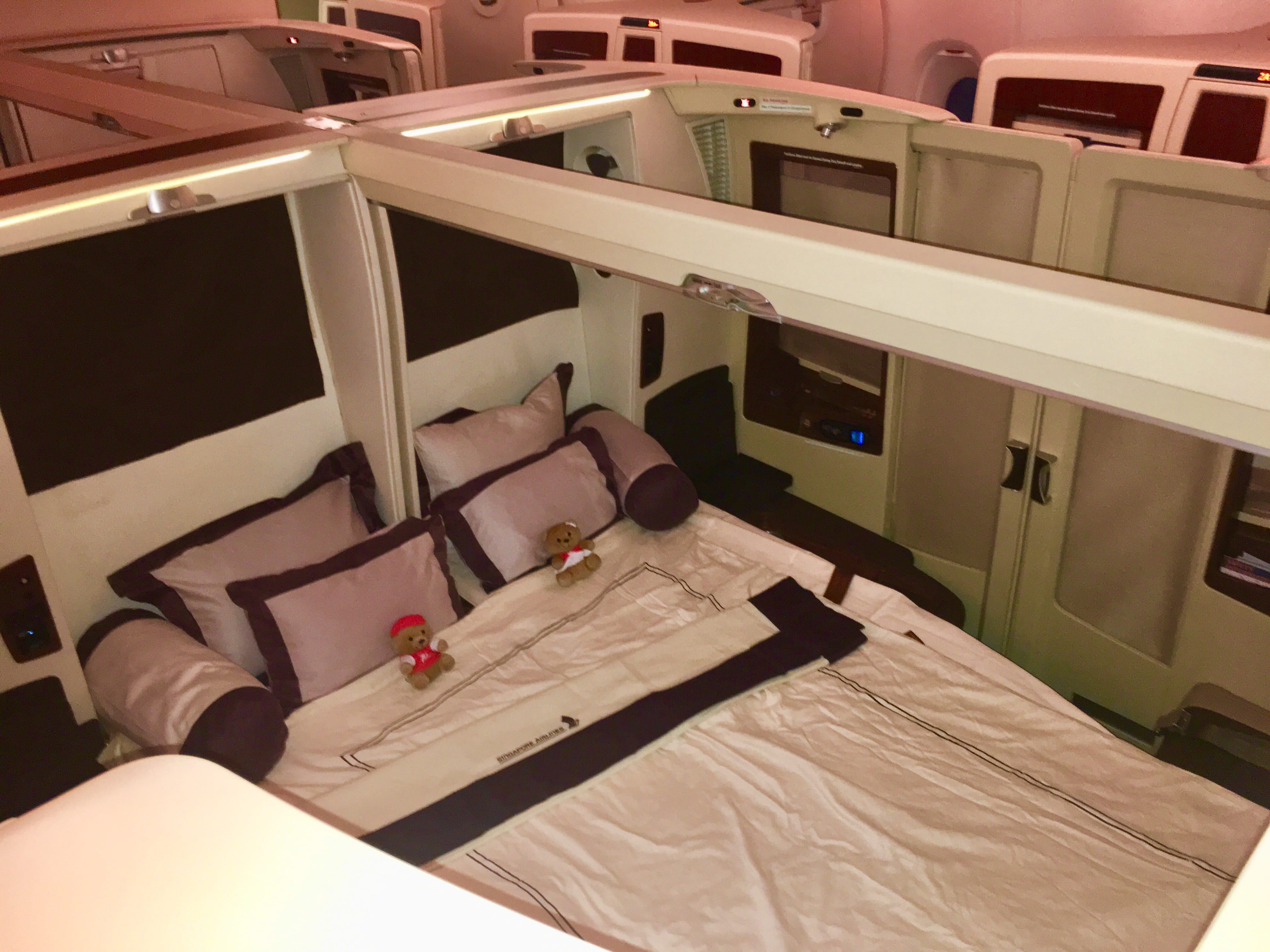 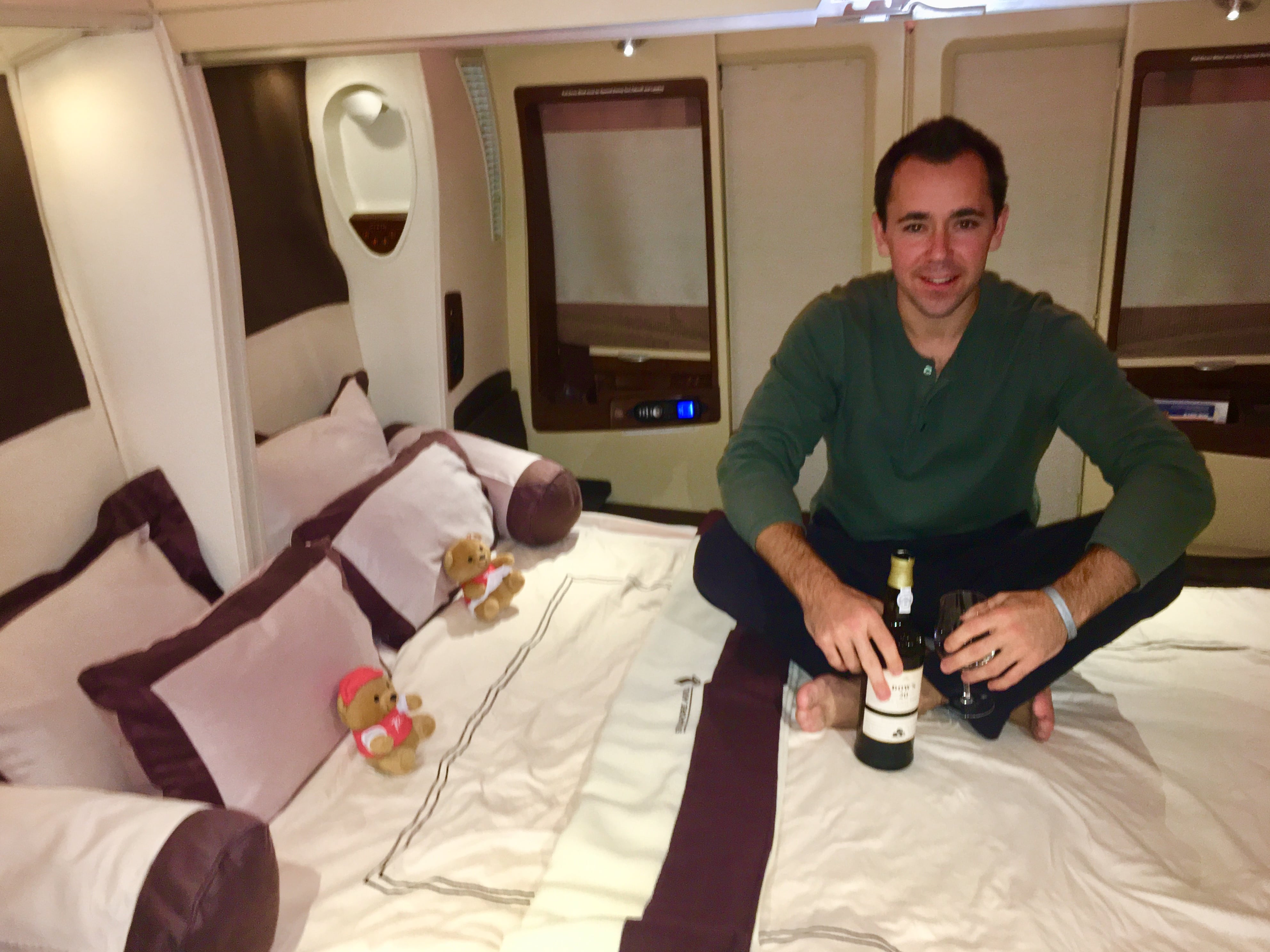 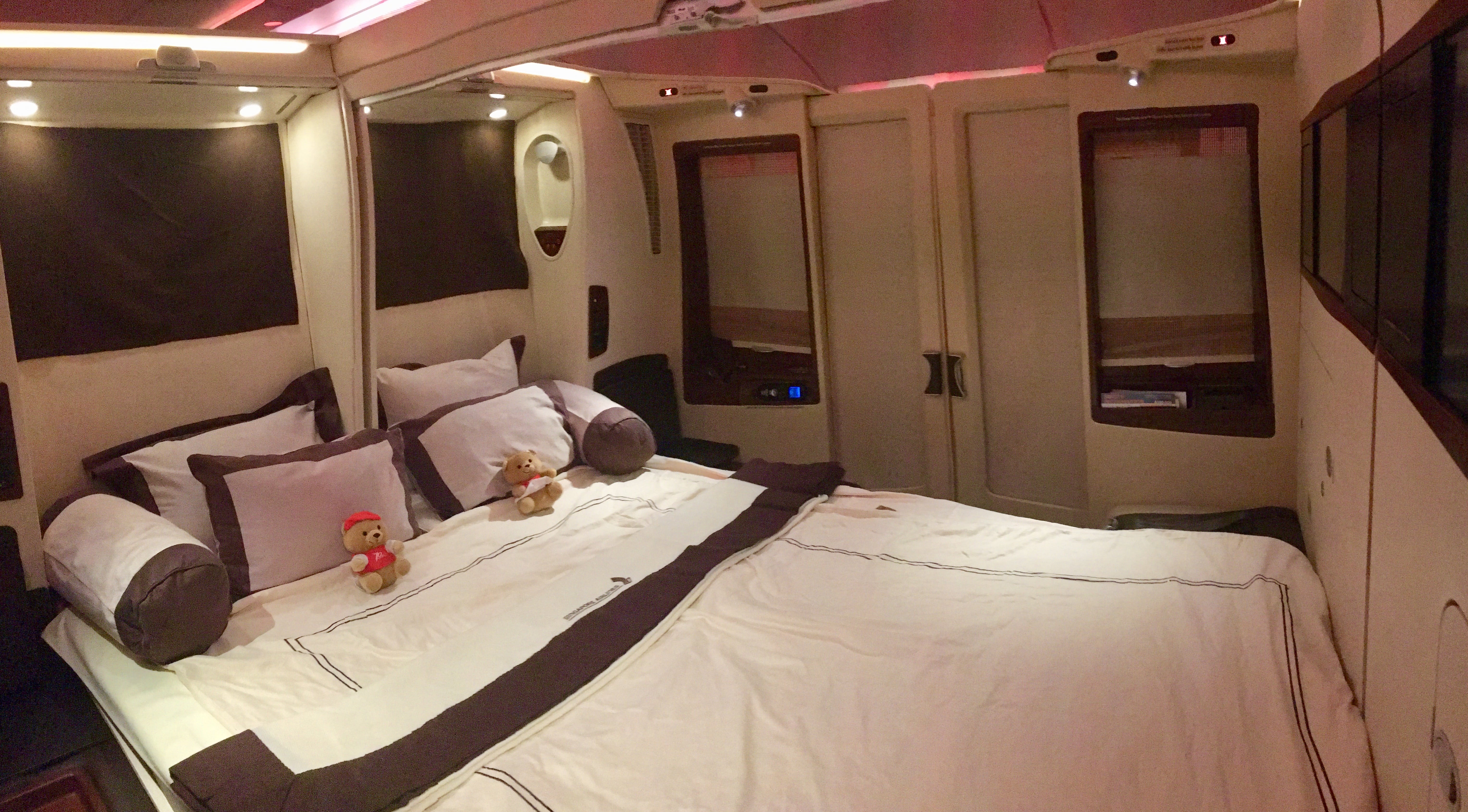 I continued chatting with Joyce and had fun taking more photos. She mentioned that I don’t fit the profile of most Suites passengers (no shit) and she was happy to have someone in the cabin who was talkative and excited to be there. Given the time it took to serve numerous dinner courses and prepare my bed, when I finally laid down to rest there was only about two hours remaining in the flight. Although the suites are not entirely enclosed and a tall person could look over top of the windows and into the cabin, they are as quiet and peaceful as you can imagine. I turned off all of the lights and slept for about 30 minutes. I’m confident that a strong argument could be made for this being the pinnacle of commercial air travel. 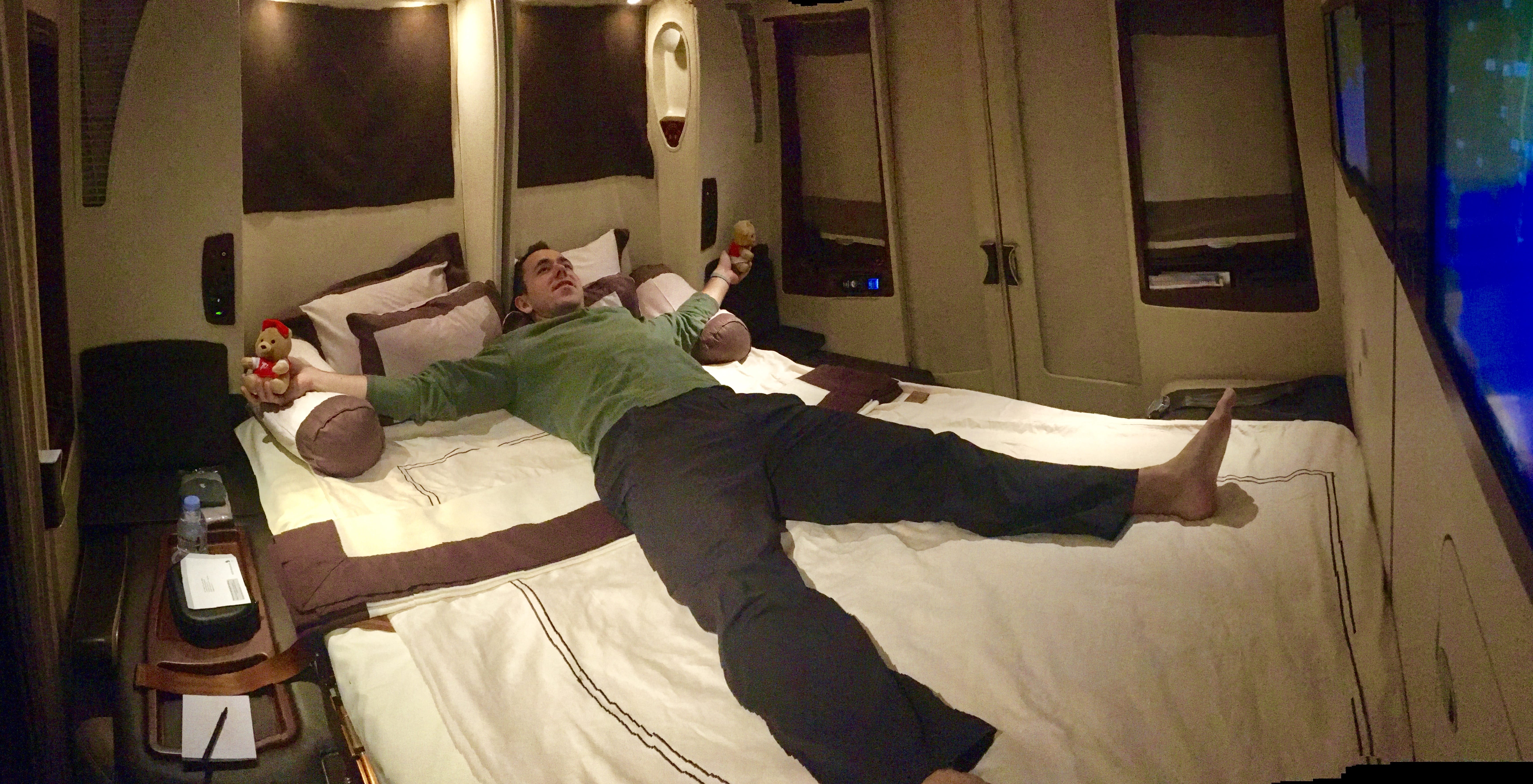 As we approached Singapore, I woke up and began gathered my things. The crew found it funny that I only had a backpack with me and no other bags (that was all I needed for my three-day Central Asia adventure). When I thought about it, I guess it was indeed relatively unique to be ‘backpacking’ in first class. Normally, when I arrive in Singapore after a trip, I make a quick stop at the grocery store on the way home from the airport. When the crew asked me if there was anything else they could do for me before landing, I proceeded to do my grocery shopping. It worked like a charm and saved me a stop. I left the plane with a full bag of apples, bananas, fruit and an assortment of candy. They also gave me one of the stuffed teddy bears as a souvenir. Overall, they were an exceptional example of Asian hospitality. What a memory it had been.

Two weeks following my experience, Business Insider published an article about the 10 most luxurious first-class cabins in the world. According to them, Singapore Suites ranks 5th behind Air France, Lufthansa, Emirates and Etihad’s outrageous Residence, a cabin that features a living room, double bed, private shower, personal butler and limousine transportation service to the airport. In response to Etihad and other over-the-top upgrades, SQ unveiled new A380 Suites that can essentially replace a hotel room. I guess it’s time to start playing the credit card game again.

In May 2018, six months after my trip, I met Joyce for dinner in Singapore. We finally found time between two crazy travel schedules to get together. I barely recognized her without her uniform on. I enjoyed catching up and hearing more about life in the sky. She is hoping to be promoted from ‘green’ to ‘red’ next year. Fingers crossed! 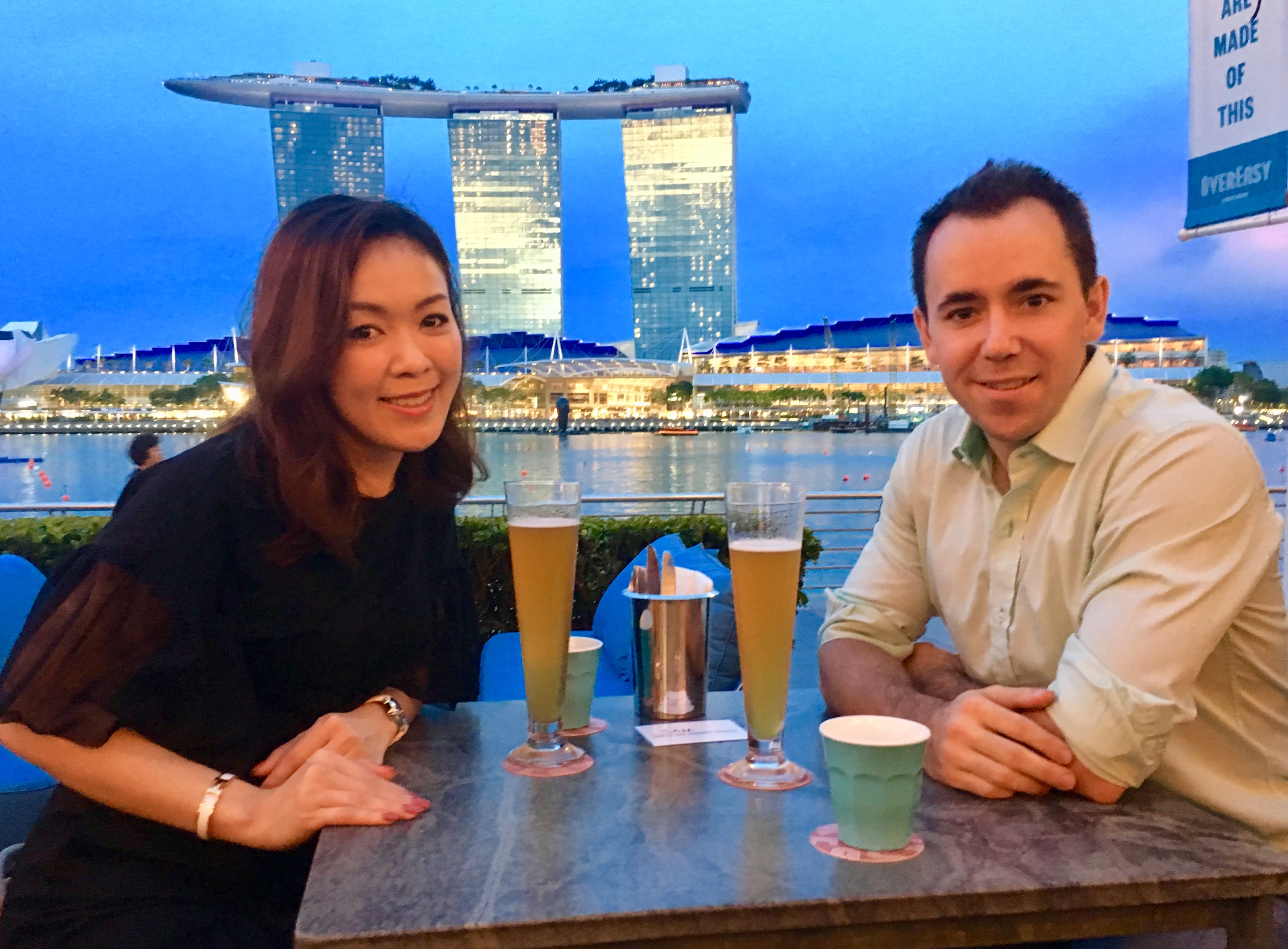 As you can imagine, this trip has remained one of my top travel memories. It has also helped put a number of other things into perspective. If you can make it work with points, I would recommend taking a trip like this once. However, at least for me, I’m not sure it’s something I would want to get used to doing frequently, and I would absolutely never pay cash for it. Start saving those credit card points now and before you know it you could be flying all over the place for free. Let me know if you think I can help – I’d be happy to. Good luck!

Which airline has the best first class? Have you flown in it?