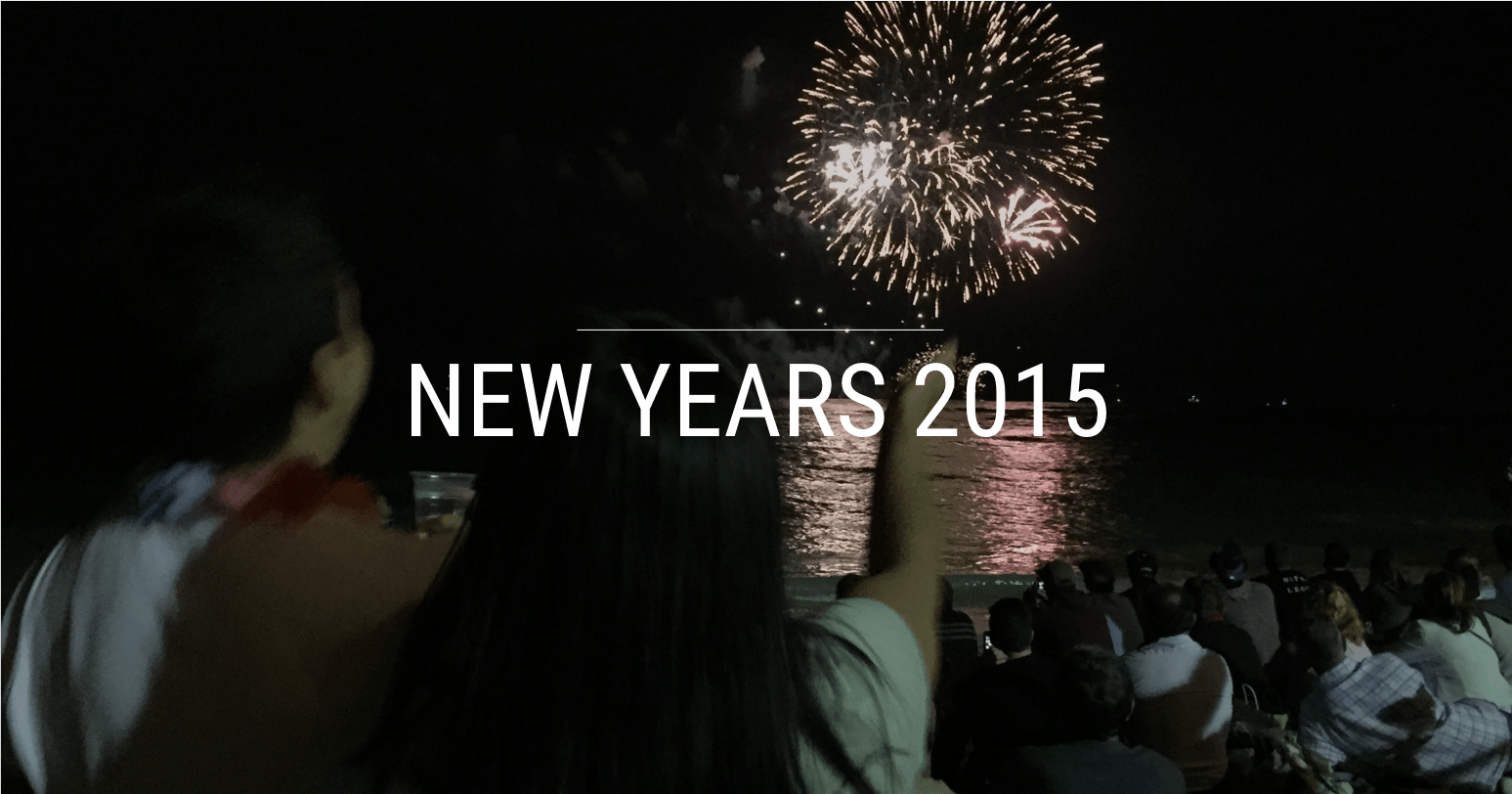 | 🇳🇿 • 🇺🇸| “3, 2, 1, Happy New Year!” Millions of people around the globe shout this infamous countdown every year to celebrate the beginning of a new chapter. It’s an opportunity to reflect on the past 12 months while also anticipating what the next 12 have in store. I’ve come to love the occasion and the perspective on life and the world it helps create. Over the past few years I have flipped my calendar from some memorable places, including Cancun, Monaco, Iran and Lake Tahoe. Although each of them represent terrific memories in their own way, I’m not sure any of their stories will remain with me like 2015.

On December 31, 2014, I woke up at an Airbnb in Birkenhead, New Zealand, a small town slightly northeast of Auckland CBD. It was the final day of the year, as well as the final day of an epic 10-day road trip through New Zealand. Three friends – Rob, Shauna, Isso – and I planned to make it count by visiting Karekare, a black sand beach on the western coast. Like everything in New Zealand (the most naturally beautiful place in the world), it was gorgeous. 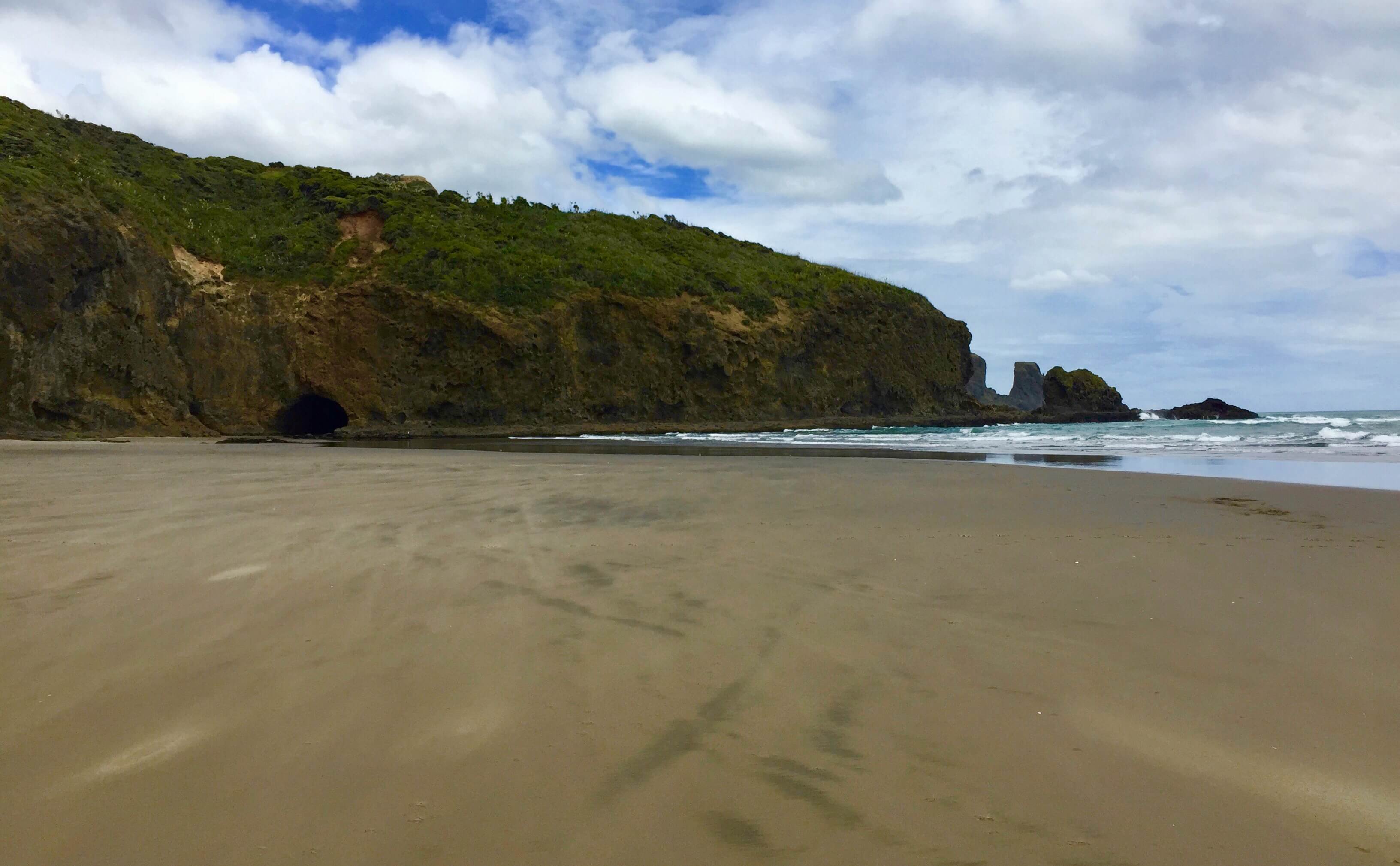 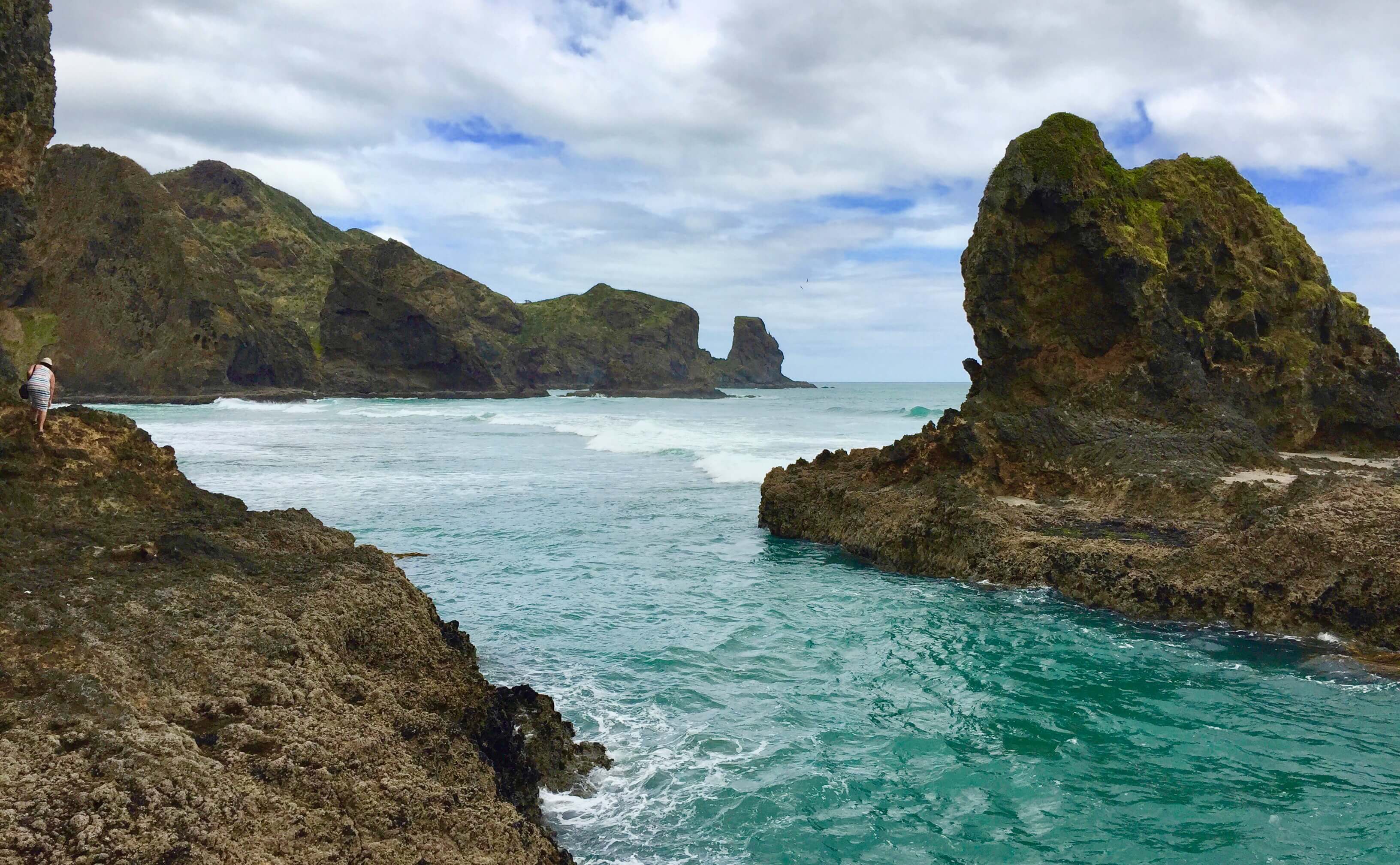 Anxious to be among the first people on earth to experience 2015, we left the beach mid-afternoon to begin preparing for the evening. After a quick stop at the house to get cleaned up, we made our way downtown for dinner. Driving southbound across the Auckland Harbour Bridge provides a fantastic panoramic view of the city. As expected, finding a place to park was a headache as was getting a table at a decent restaurant. Despite the trouble, we came to enjoy the chaos and everything the festivities had to offer. We were told that the fireworks would be set off from the top of the Auckland Sky Tower. We walked in circles a few times trying to finagle a good vantage point. After several failed attempts, we finally settled on a spot in front of the Hilton Hotel which sits at the end of a pier on the waterfront. Although there were a few other people nearby, we managed to lock down a relatively vacant and comfortable area. Having arrived there just in time for the show, the Auckland skyline dazzled us minutes later as the clock struck midnight. The fireworks lit up the sky as the legendary Auld Lang Syne tune rang throughout the streets. There’s no doubt, Kiwis know how to throw a party! 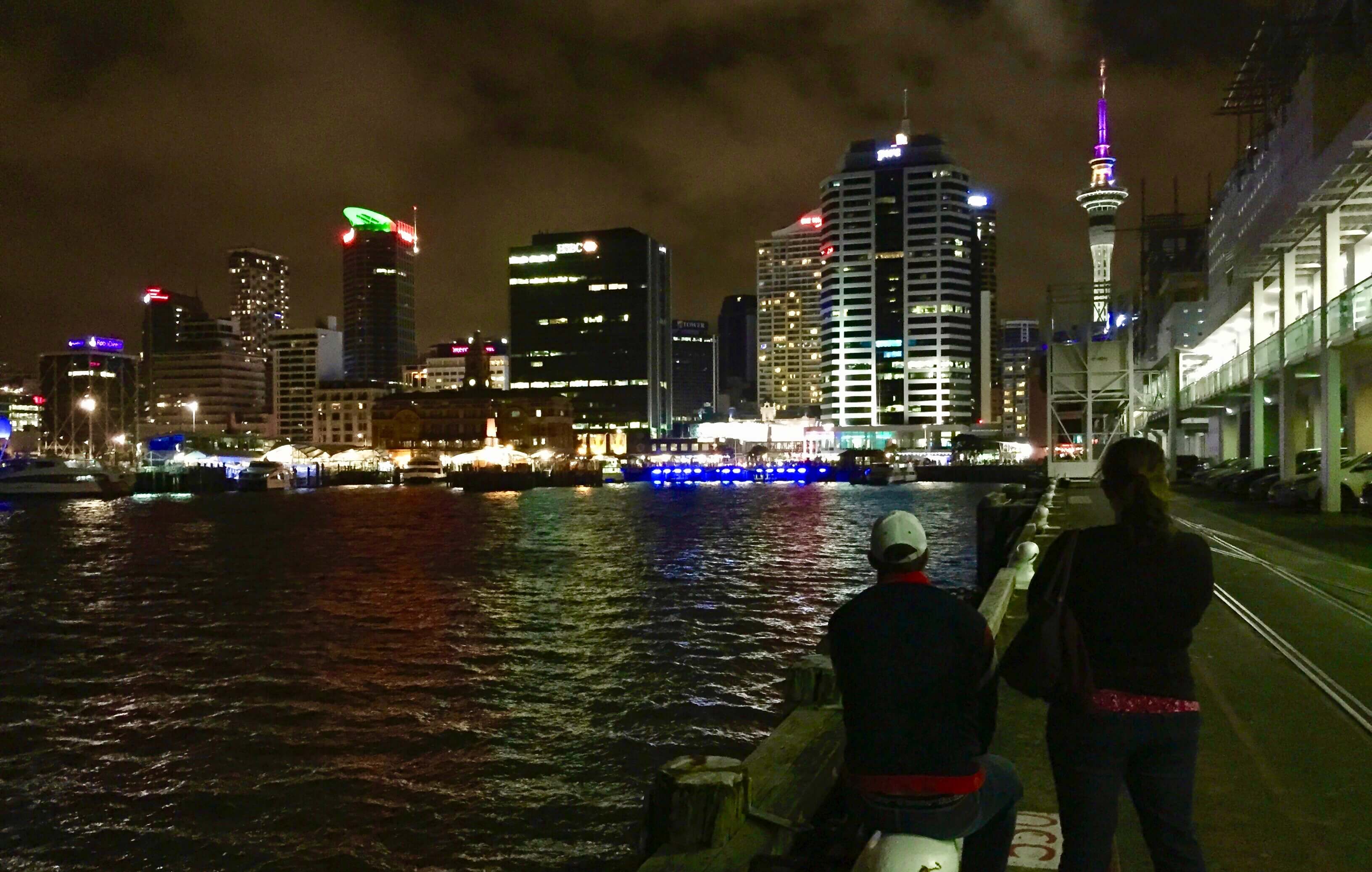 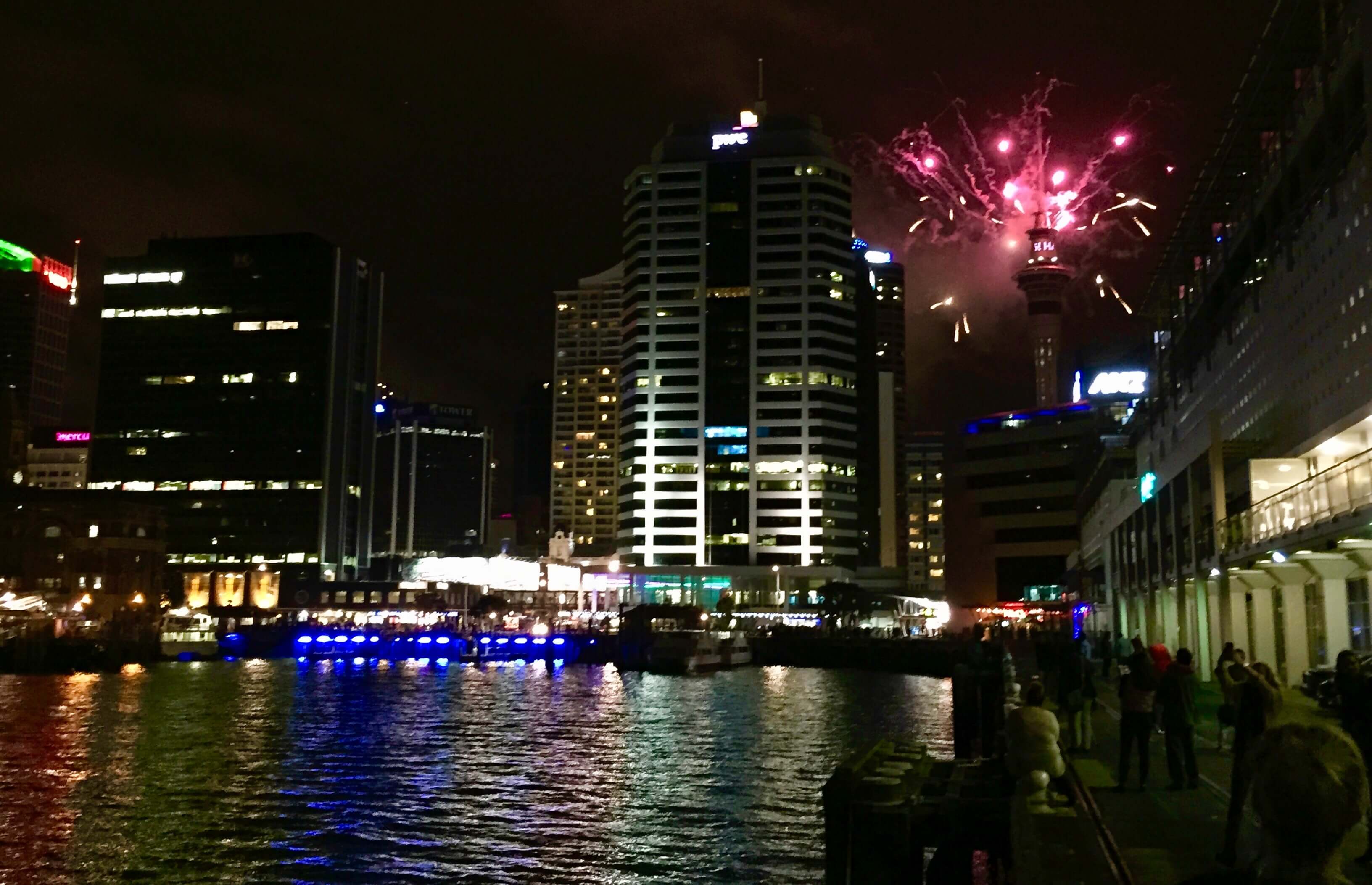 Several months before this, in roughly October, we were in the early stages of planning our New Zealand adventure. Regarding the latter days of the trip, Rob and Shauna were set on staying in the country and exploring more of the North Island. Isso and I, however, were considering other options, some within NZ and some outside. We tossed around a number of ideas in the ‘region,’ including Australia, Fiji and the Philippines. As you may know, traveling the southern Pacific is usually inconvenient due to limited flights and high fares. We were falling victim to this and weren’t sure what to do. We then threw out the idea of Hawaii, a place I hadn’t visited since I was a kid. When digging deeper, we learned that Air New Zealand operated a daily direct flight between Auckland and Honolulu, which provided us with some welcomed travel date flexibility. Looking even closer at the details, I noticed that the flight departed Auckland at 11:20am and arrived Honolulu the ‘previous day’ at 9:15pm. At first, I didn’t think twice about this. There are tons of crazy itineraries when traveling internationally, for example taking a late-night flight from LAX to Asia and arriving two days later, or that China is all on one time zone so crossing its western border means instantly encountering a three-hour difference. Through many years of globetrotting, schedules like this had become the norm. As a result, it took several minutes for me to identify the opportunity that was developing on my computer screen. Then, it hit me, and I thought to myself, “Holy shit. Arriving the previous day? How about arriving the previous YEAR?” The January 1st flight was available and within the day we had it booked.

Fresh off a first-rate New Year’s Eve celebration, I woke up the next morning, in 2015, excited about the imminent addition to my travel antics repertoire. Isso and I said adios to Rob and Shauna and set out for the airport in Auckland. To this day, I don’t think I have ever wished for a flight to be on time as badly as I did that morning. We were scheduled to land in Honolulu at 9:15pm and I knew that an hour or two-hour delay would put the entire plan in jeopardy. Thankfully, all went smoothly and we departed without any issues. Throughout the flight, it was fun to follow the plane’s seat-back map as we covered a good chunk of the vast Pacific Ocean. “What year is it outside right now?” 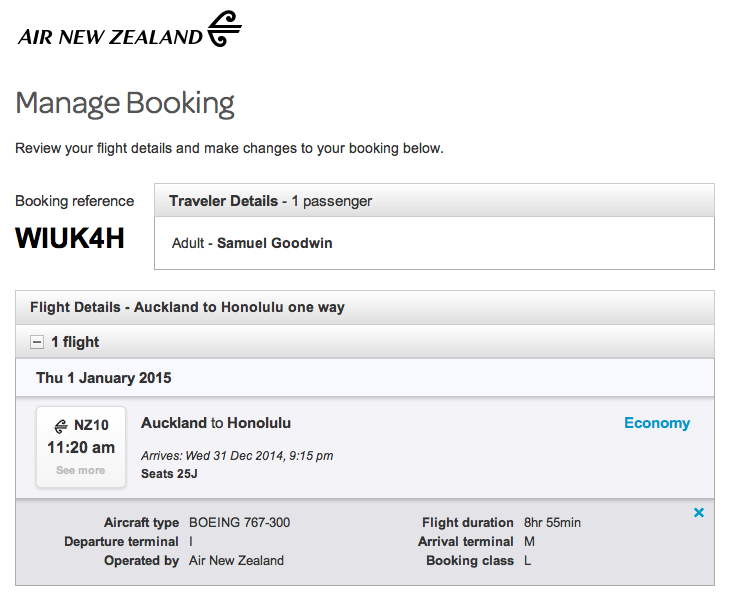 After nine hours of flying and way too many jokes about our status and location, we landed in Honolulu on time, in 2014! We grabbed a rental car and went directly to the Outrigger Waikiki Beach, a perfect location in the heart of the action. Given that all of the travel logistics played out in our favor, we actually had some time to kill after dropping our bags in the room. Around 11pm, we wandered into Waikiki Shopping Plaza. We caught the last order at a food court stall and got our lei’s ready for the countdown.

Waikiki Beach is one of the most iconic in Hawaii. Of course, it was a zoo that evening, even more so than downtown Auckland ‘the night before.’ As midnight drew near, it was an unreal feeling to look around at the hundreds of people celebrating the start of something I had already experienced. I was waiting for Marty McFly and Doc. Brown to come storming out of the bushes. Auckland and Honolulu are only two hours apart but separated by the International Dateline. Therefore, they are among the first and last places in the world to enter each day and the reason this adventure was possible. Before I knew it, my second countdown to 2015 was in full swing. The Honolulu fireworks shot into the sky from a barge anchored in Māmala Bay. Success! With the Diamond Head shadow looming in the distance and countless resort parties lining the beach, the atmosphere was off the charts. As the crowd roared and champagne tops flew, I knew I had a story to tell. 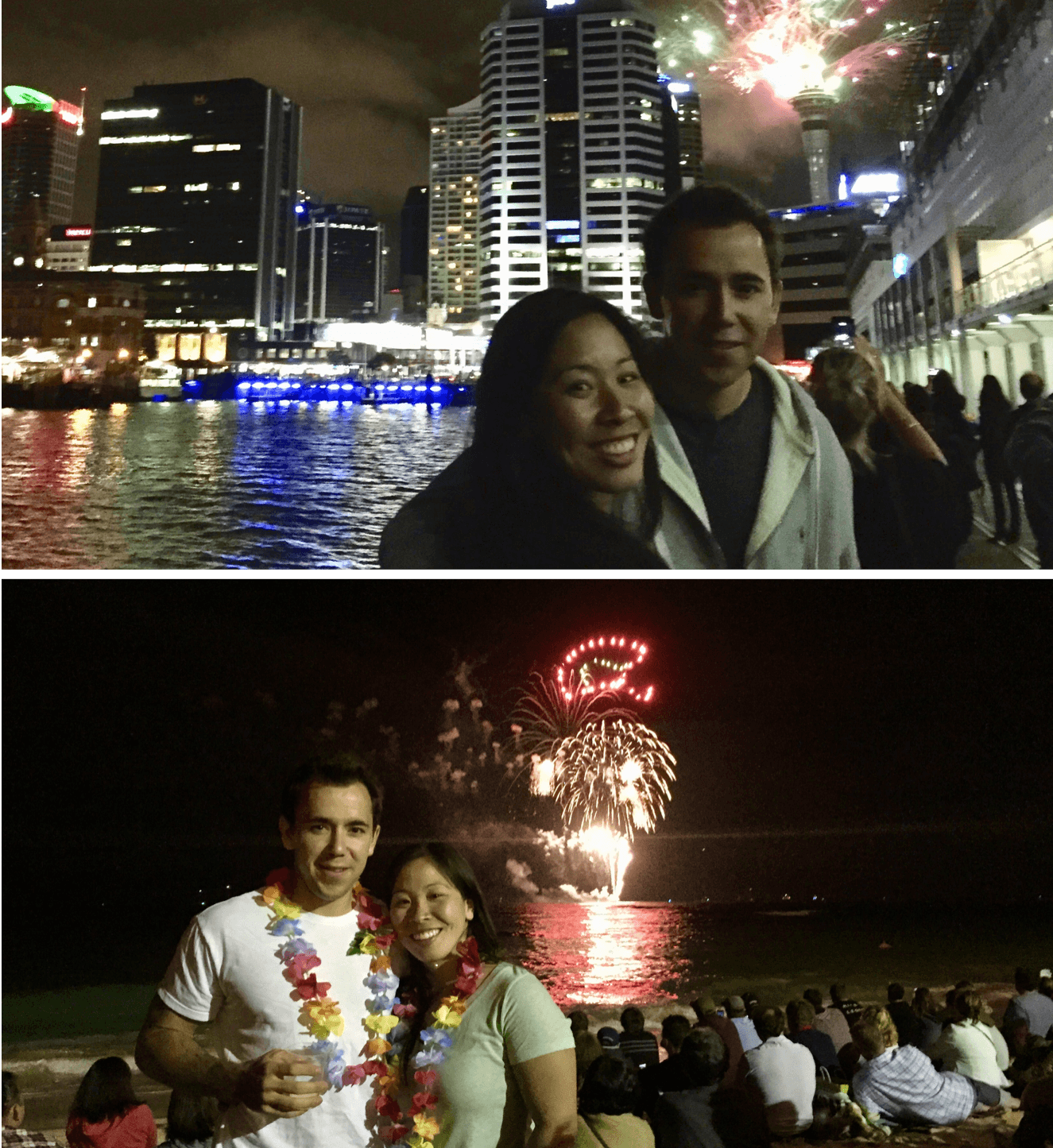 The next morning, we woke up on January 1, 2015 for the second time. We joked about whether we could fly off somewhere to catch a third celebration. As usual in Hawaii, the weather was on point and the beach as lively as ever. The balcony of our Ocean-facing room was the perfect place to relax and reminisce on the recent stunt. 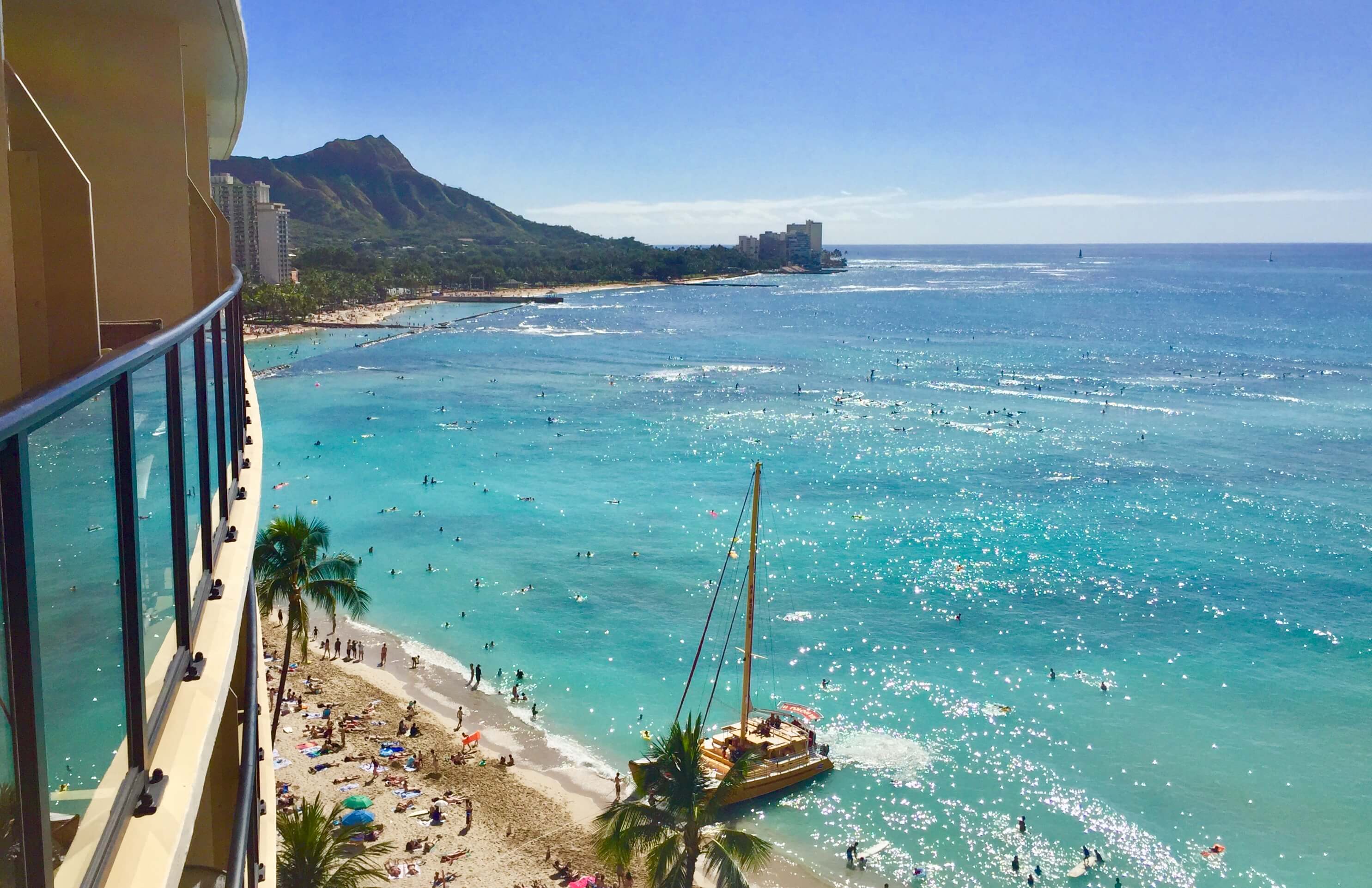 As of 2018, I believe Air New Zealand has unfortunately changed the timetable of their AKL-HNL flight. It now departs in the evening and arrives in the morning (the next day – lame!). Not to worry, a ‘double New Years’ is still available via private jet service between Sydney and Los Angeles, although the price tag is a bit steep.

The New Year’s 2015 experience remains one of my best travel memories. It required some meticulous planning and a bit of luck but was obviously well worth the effort. Even if ringing in the new year from two different locations isn’t in your plans, I can highly recommend both Auckland and Honolulu as top places to spend the occasion. Party on!

Have you been to New Zealand or Hawaii? What’s your favorite New Year’s Eve story?