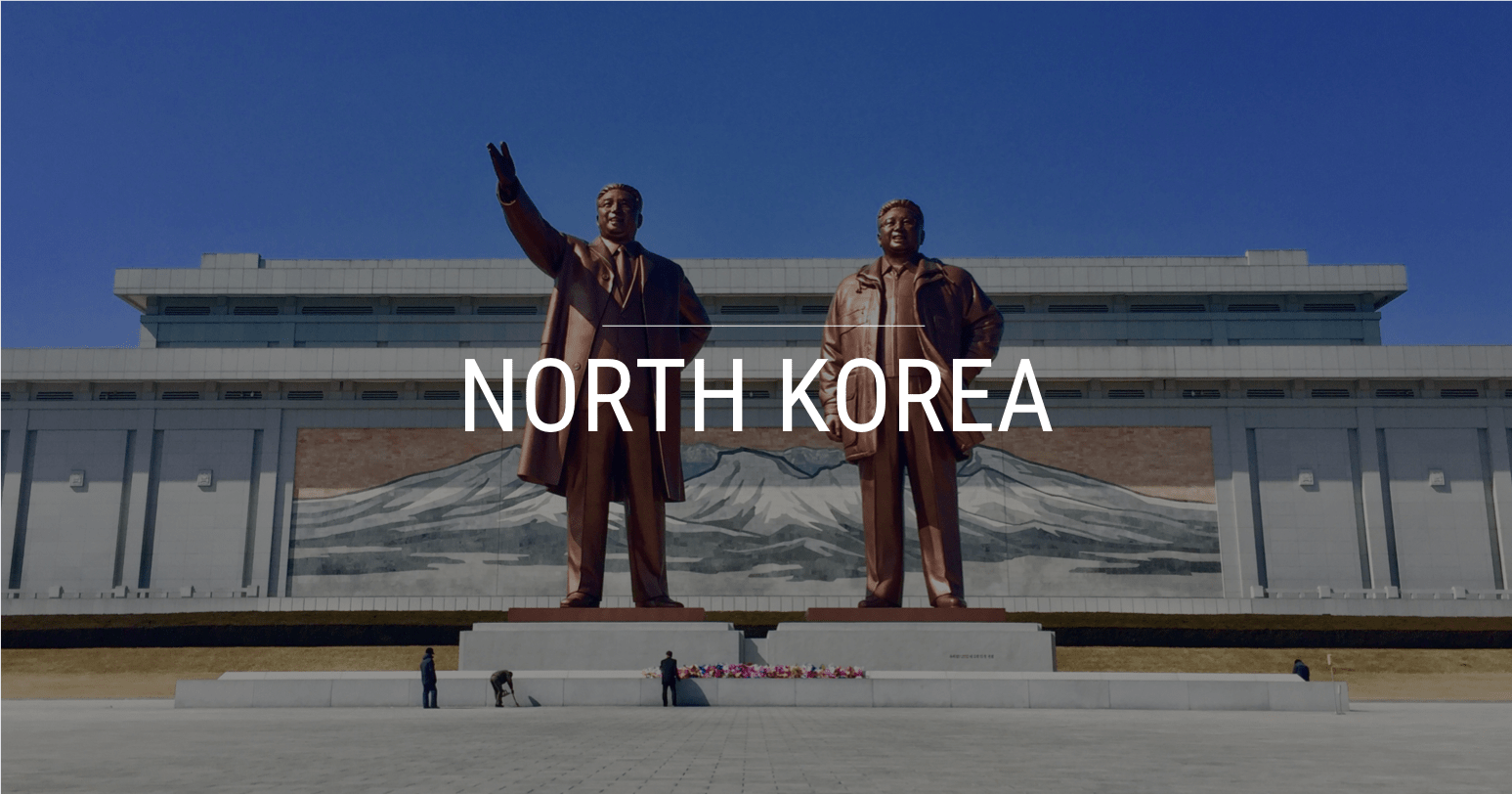 | 🇰🇵| I put on my first pair of hockey skates in Bowling Green, Ohio at the age of 4. Since that day, the game has remained a center piece of my life, affording me a collegiate scholarship and the opportunity to play in destinations like Alaska, Halifax, Ladakh and Hong Kong. Despite an already immeasurable number of memories in the bank, my debt and gratitude toward the sport grew to a new level in March 2016 when I traveled to Pyongyang for five days to coach and play alongside the North Korean National Hockey Team.

Unless you’ve been living on another planet for the past 100 years, you probably don’t have any trouble understanding why I often refer to this experience as the height of sports diplomacy. North Korea (officially the Democratic People’s Republic of Korea, or DPRK) is famed for its isolationist stance toward most of the world and is one of the strangest and most memorable places I’ve visited. I easily get more questions about my time in North Korea than any other trip.

Virtually all flights in to the country originate in Beijing. As mentioned in my Top 10 Passports Stamps countdown, DPRK visas are handled externally in advance and simple to obtain. Our private tour consisted of a select group of Asia-based expats, most of whom are originally from North America or Europe. Due to a scheduling conflict, I missed the formal briefing about our trip and was given two bits of instructions while in the boarding area of PEK airport – 1) Korean’s view their leaders as Gods, and 2) Always behave as if you’re going to dinner at your grandmother’s house. Ok, noted. 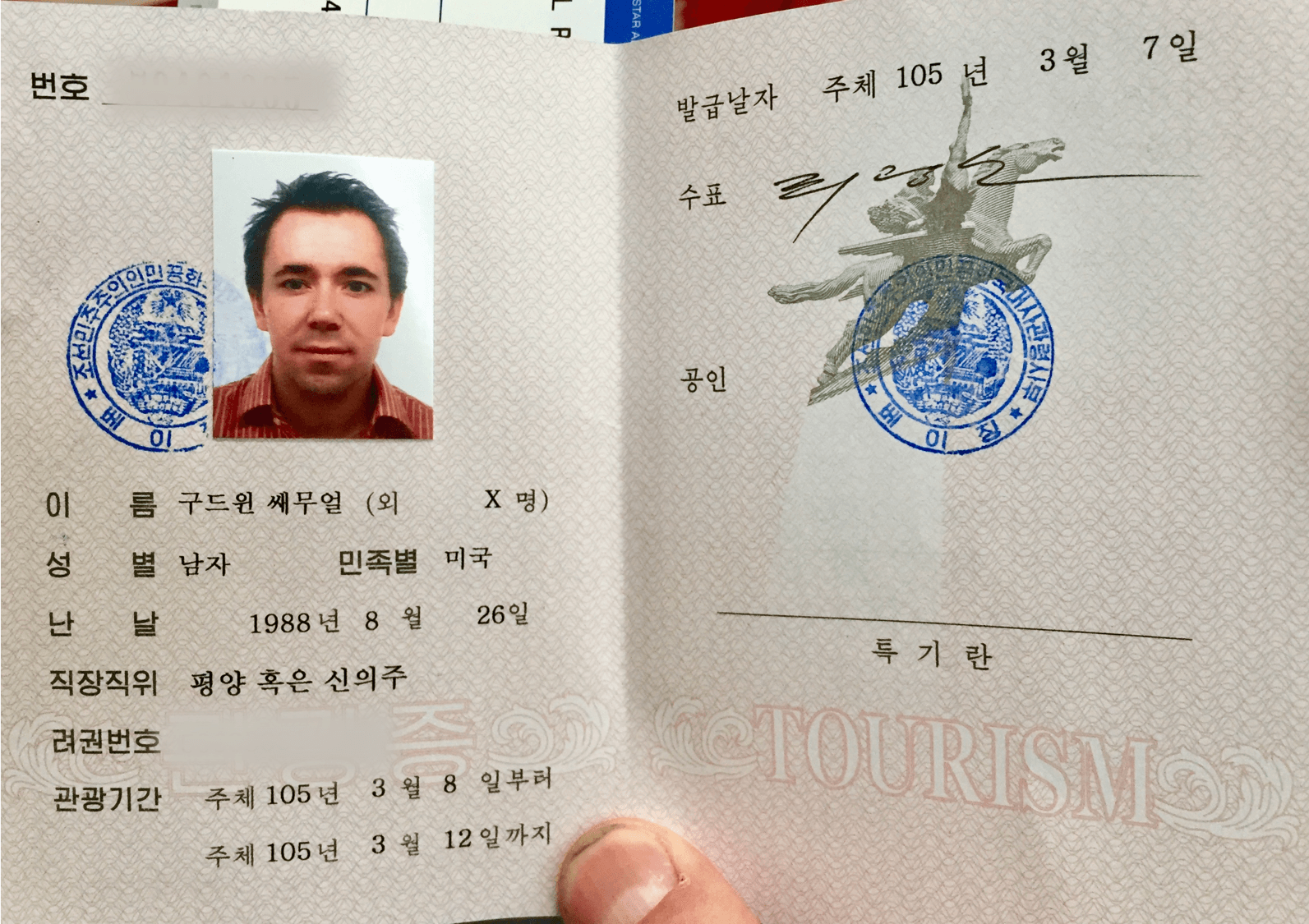 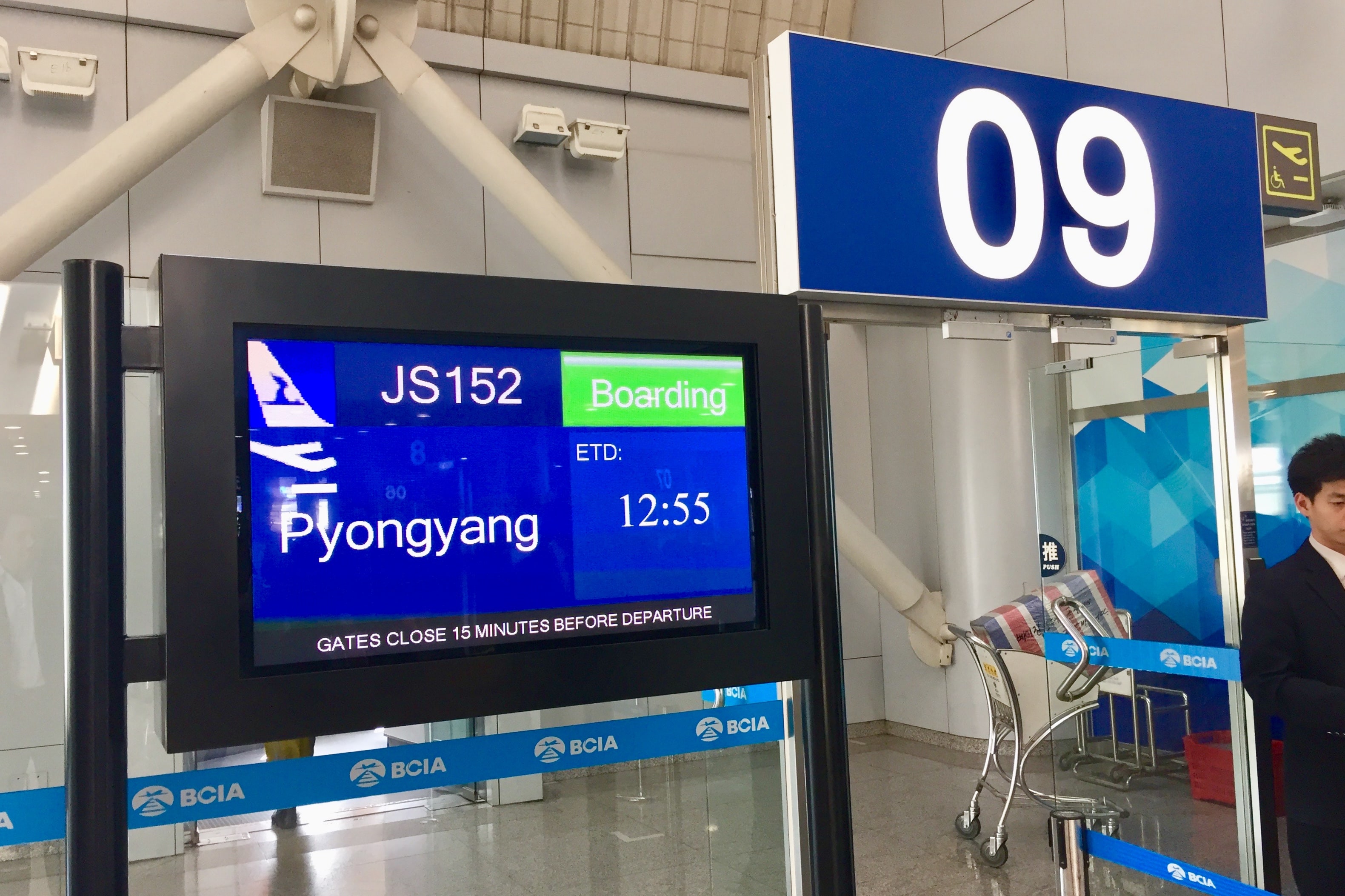 Although it was a seamless episode, arriving Pyongyang airport and sliding my US passport through the immigration officer’s window was as suspenseful as you can imagine. After collecting our bags, we were promptly met by our two guides, one male and one female, both named Kim. Mr. and Mrs. Kim went everywhere with us – on the bus, in the hotel, even in the locker room as we got dressed for practices and games. The trips’ itinerary proved to be a fantastic blend of hockey and general sightseeing. The former was spent at the Pyongyang ice rink, a structure built in 1982 and patterned after the Cathedral of Brasília. It seats approximately 6,000 spectators and is the site of all DPRK’s ice sports. It reminded me of a vintage coliseum or old school ECAC rink. 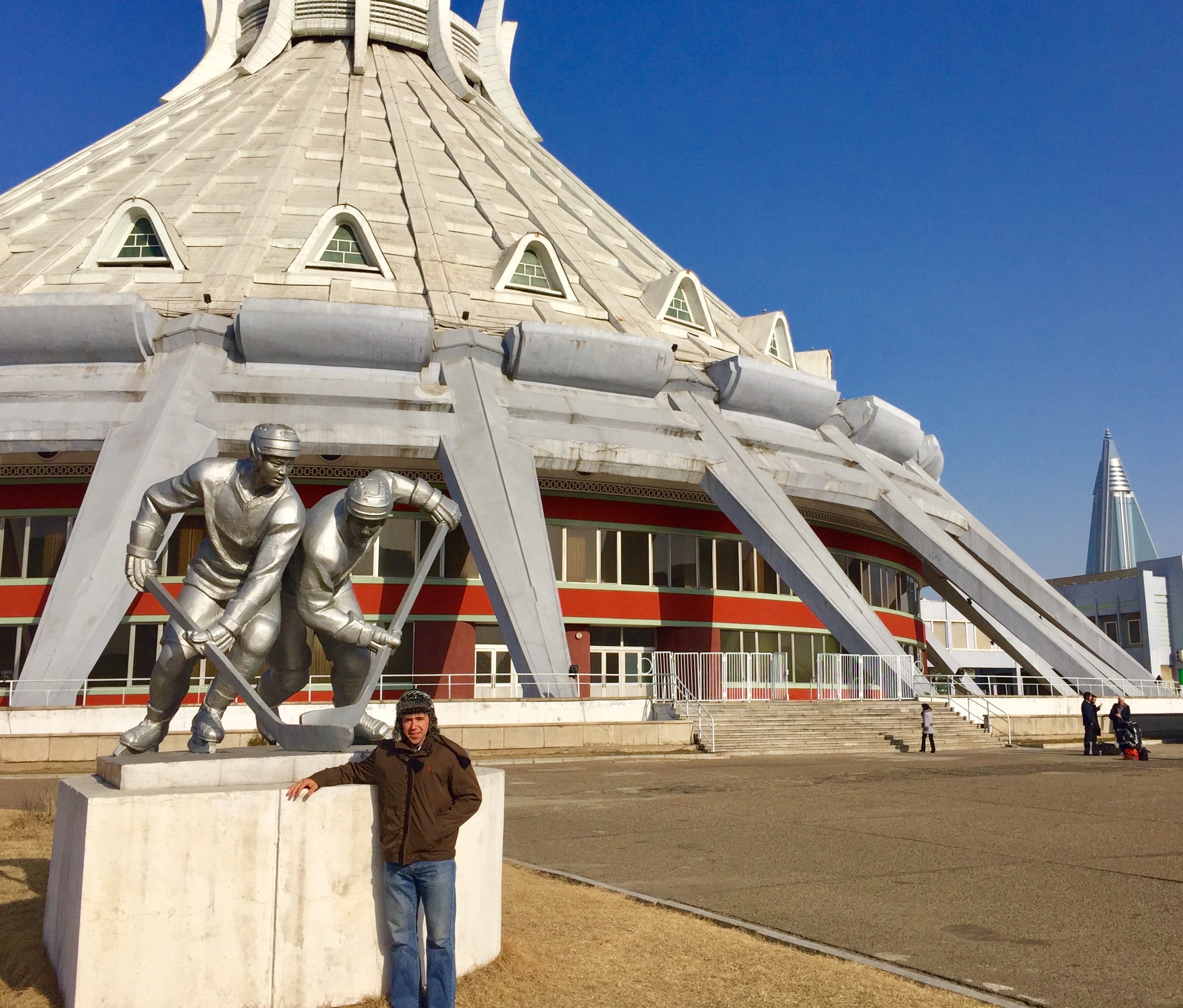 The morning usually consisted of practice and the evening of games. The DPRK players were surprisingly talented and, despite speaking next to zero English, were as attentive and respectful as anyone I’ve coached. Thankfully, we had a translator to bridge the communication gap making the training sessions run much smoother.

Following one of the practices, my buddies Rob, Alex and I were interviewed by a local TV station. We spoke highly of the DPRK players and about how well we believe they stack up internationally. We also grabbed a photo with Mrs. Kim on the bench, where she sat everyday while we were on the ice. 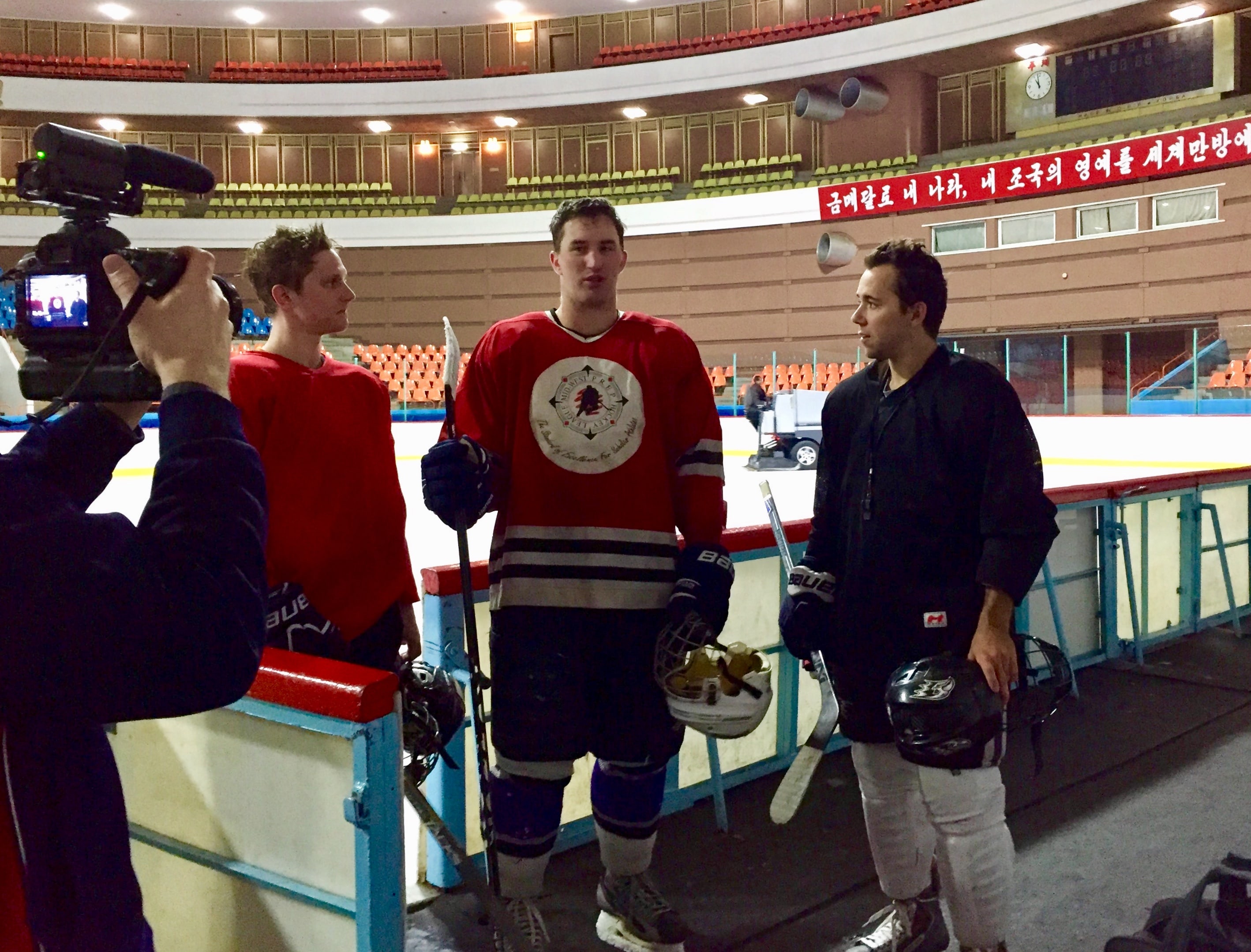 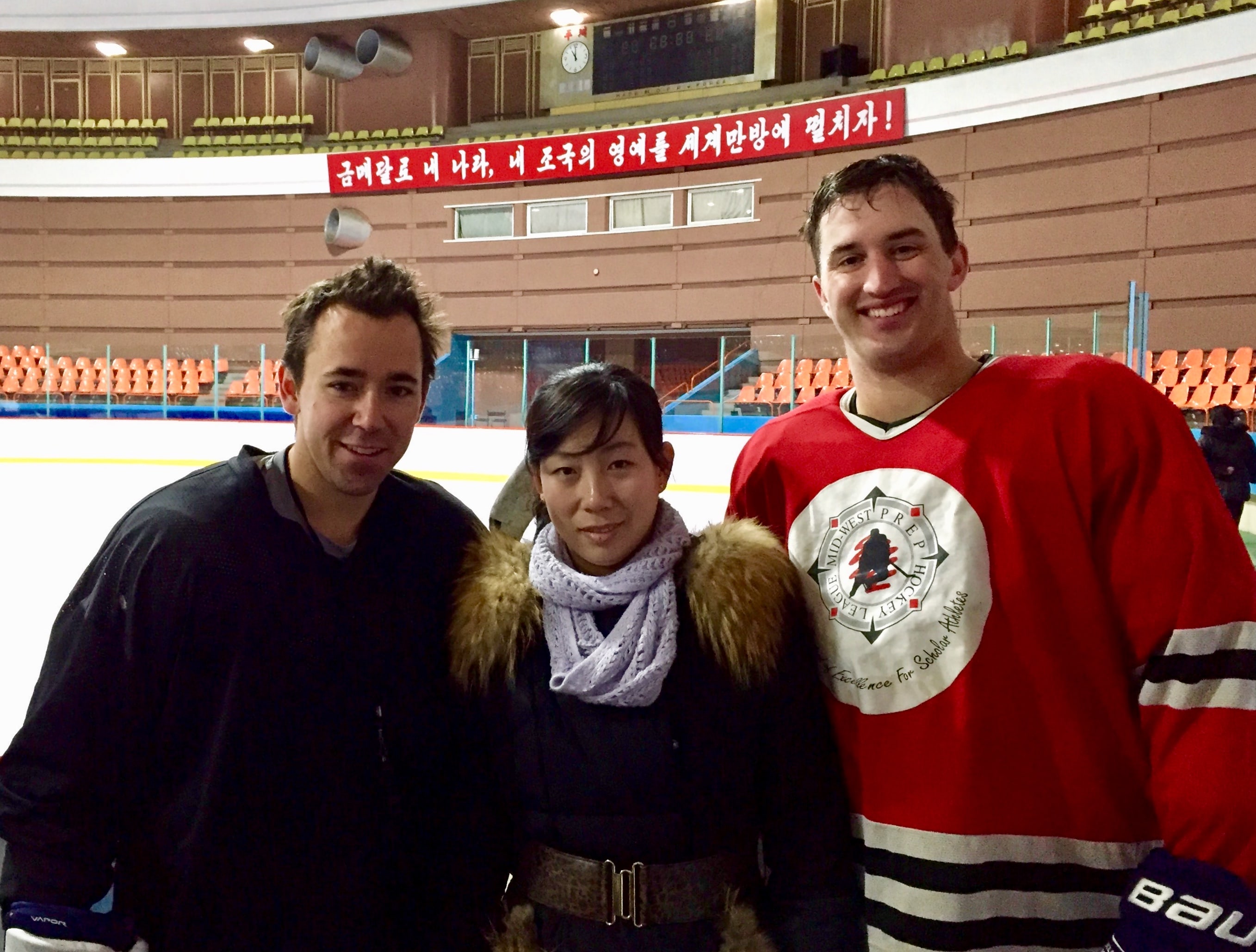 The evening games were a blast, and faster paced than I was expecting. The DPRK players skate and move the puck well. Of the four games, they beat our expat squad three times – we were lucky to squeak out one tie. I managed to crack their defense a few times and find the back of the net. Following the games, we often mingled and took photos with the local players, as you do after any beer league game. 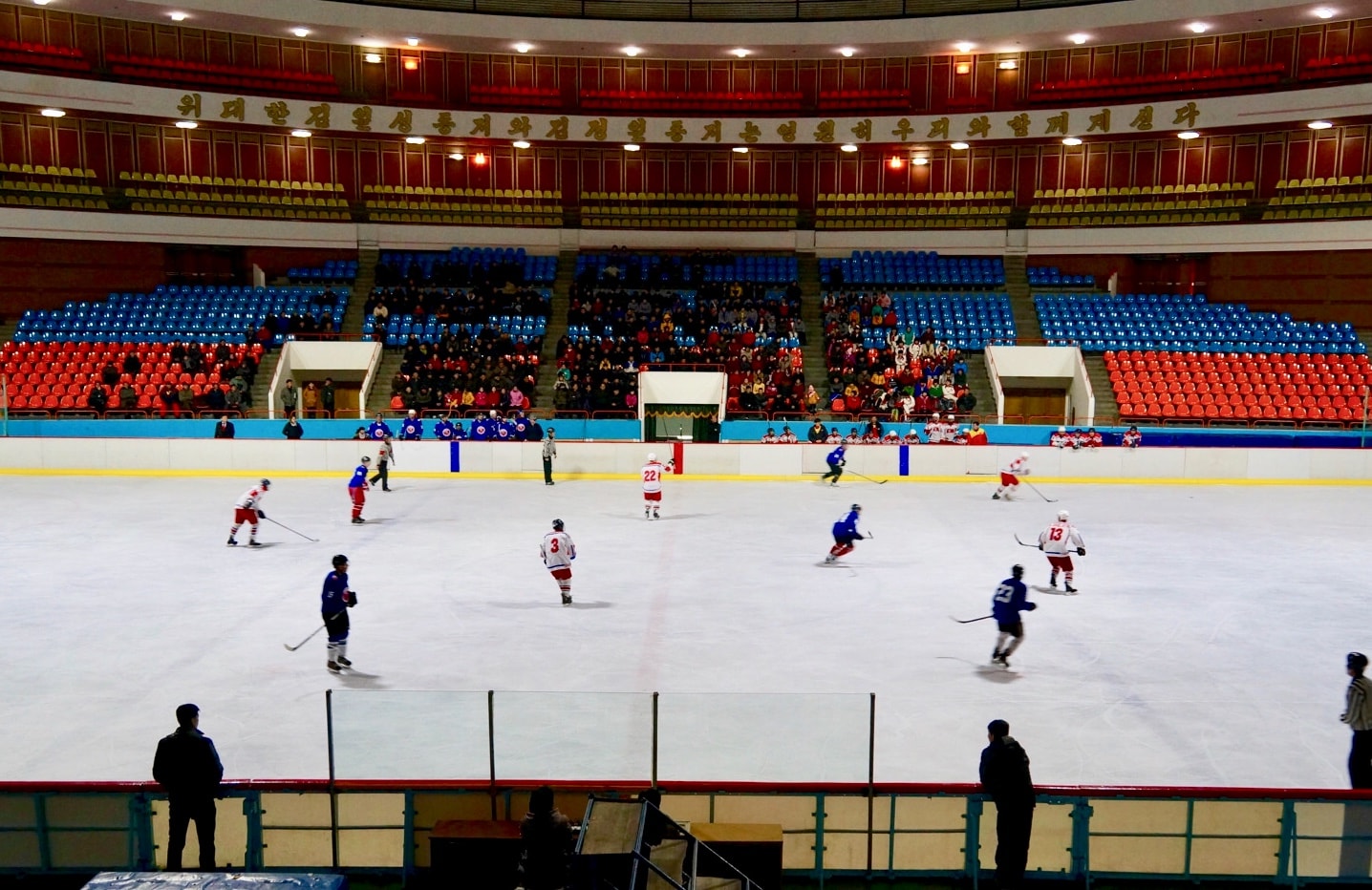 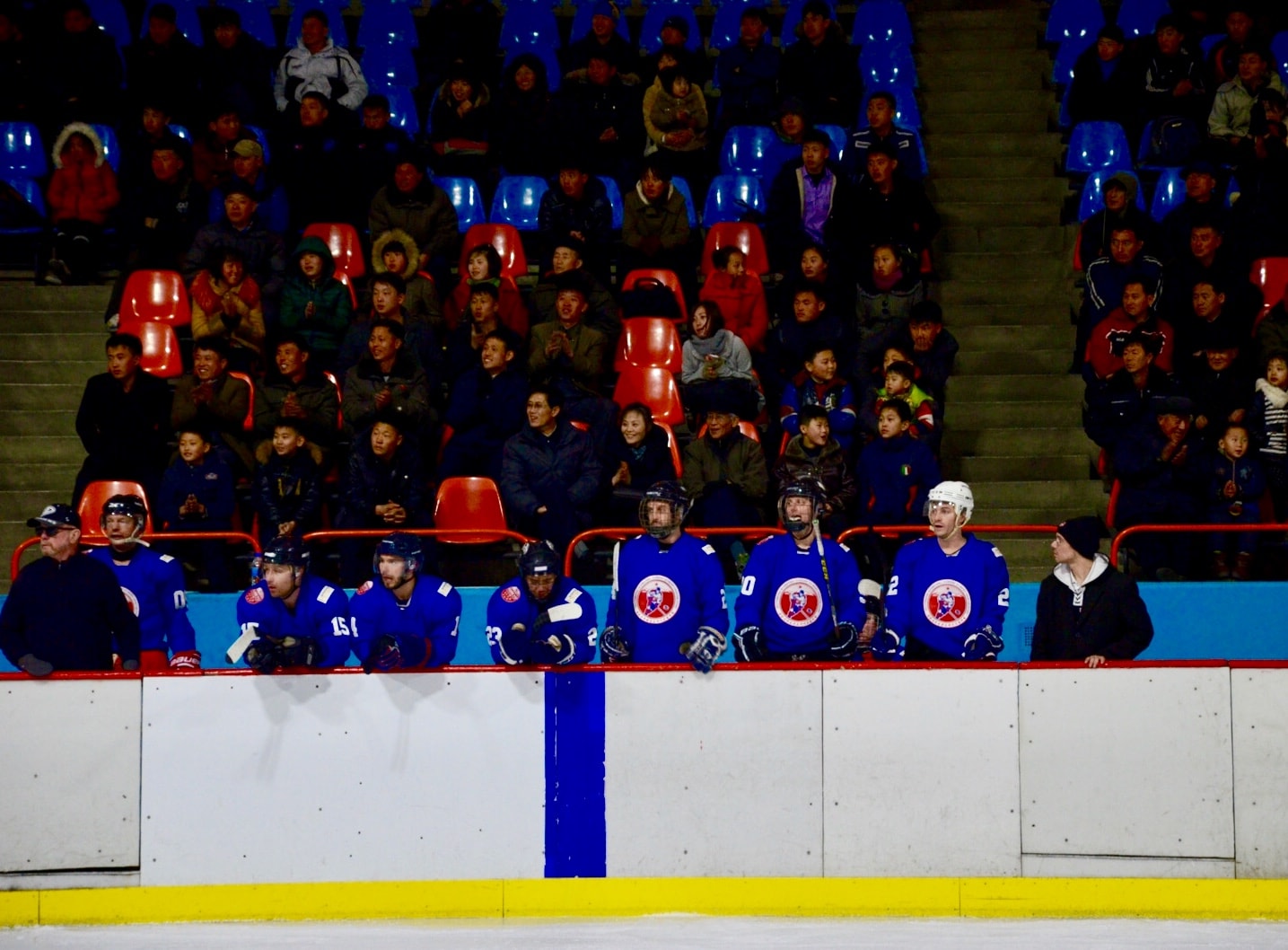 On the final night, we mixed up the teams giving visitors and locals the opportunity to skate with and against each other. I played most of the game with two DPRK line mates, an experience I will never forget. Aside from hockey, I probably could not have had less in common with them given my perspective on the world and the life I’ve been fortunate to live. However, once that puck dropped, our relationship ran like a Swiss watch. We knew exactly where to go, what to do and how to best work together to score goals. Nobody was bothered by political discrepancies, demarcation lines or nuclear weapons. We built a magical bond through the game of hockey. It was a remarkable demonstration of humanity and an event that I believe will forever give me goosebumps to recall. 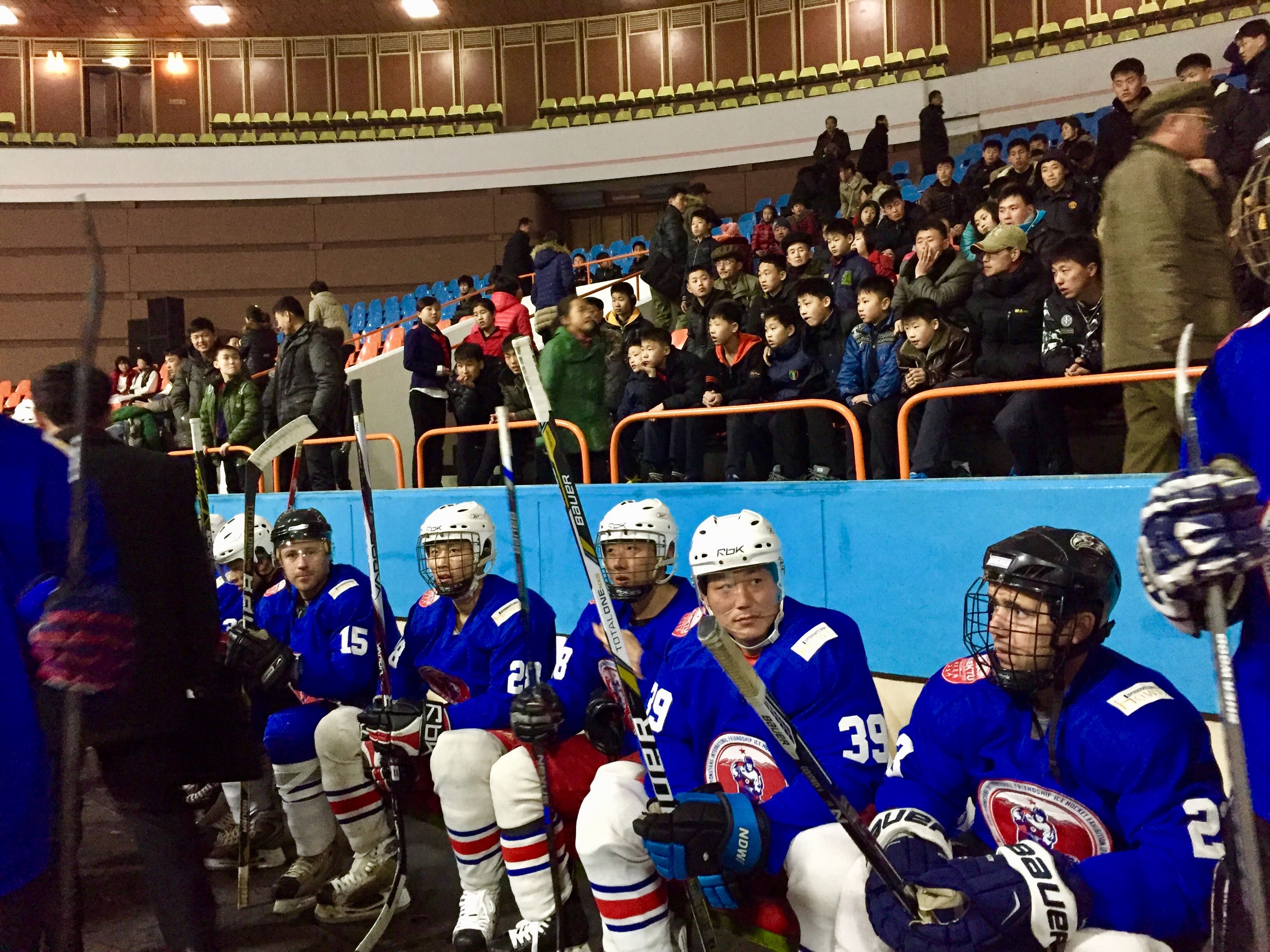 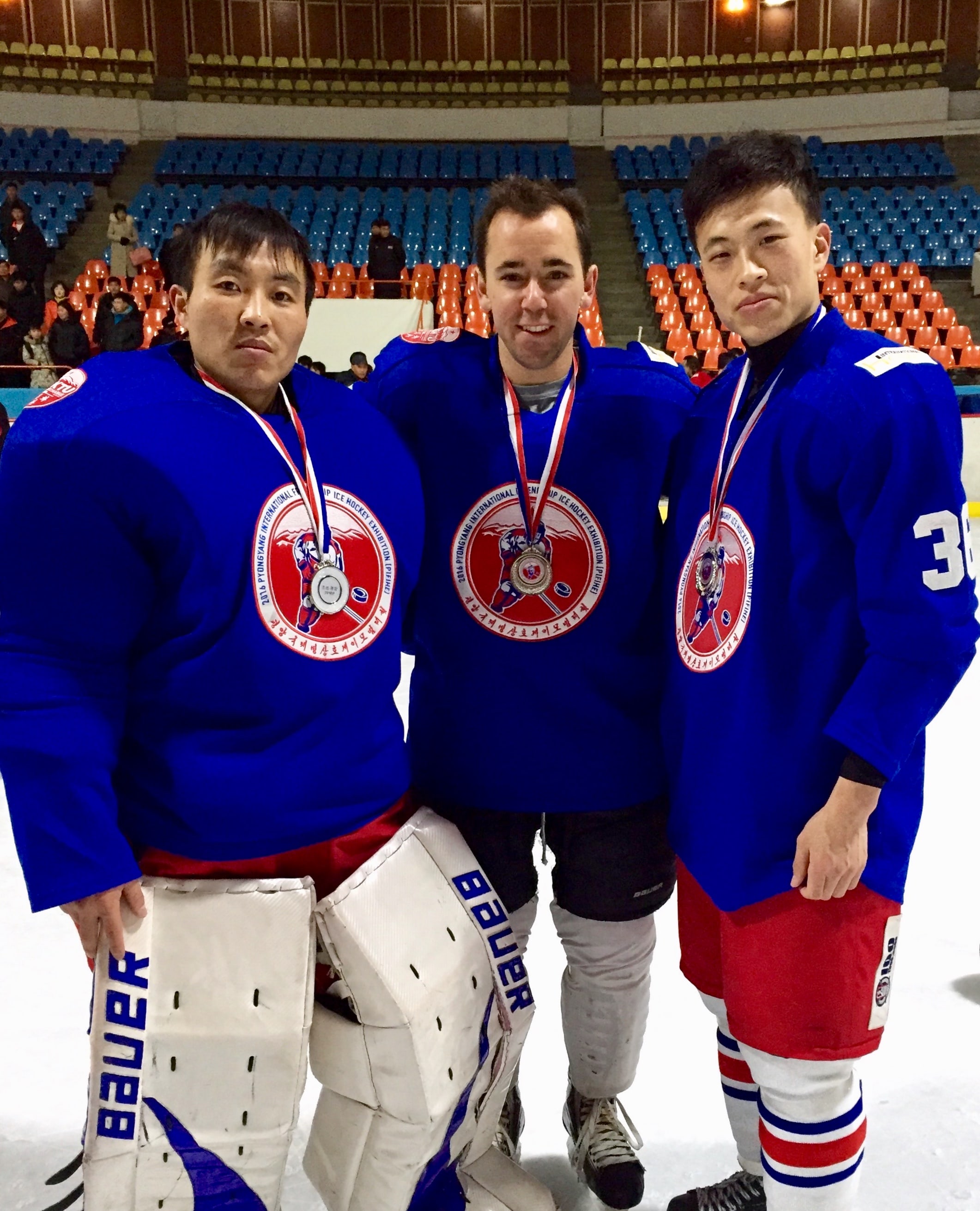 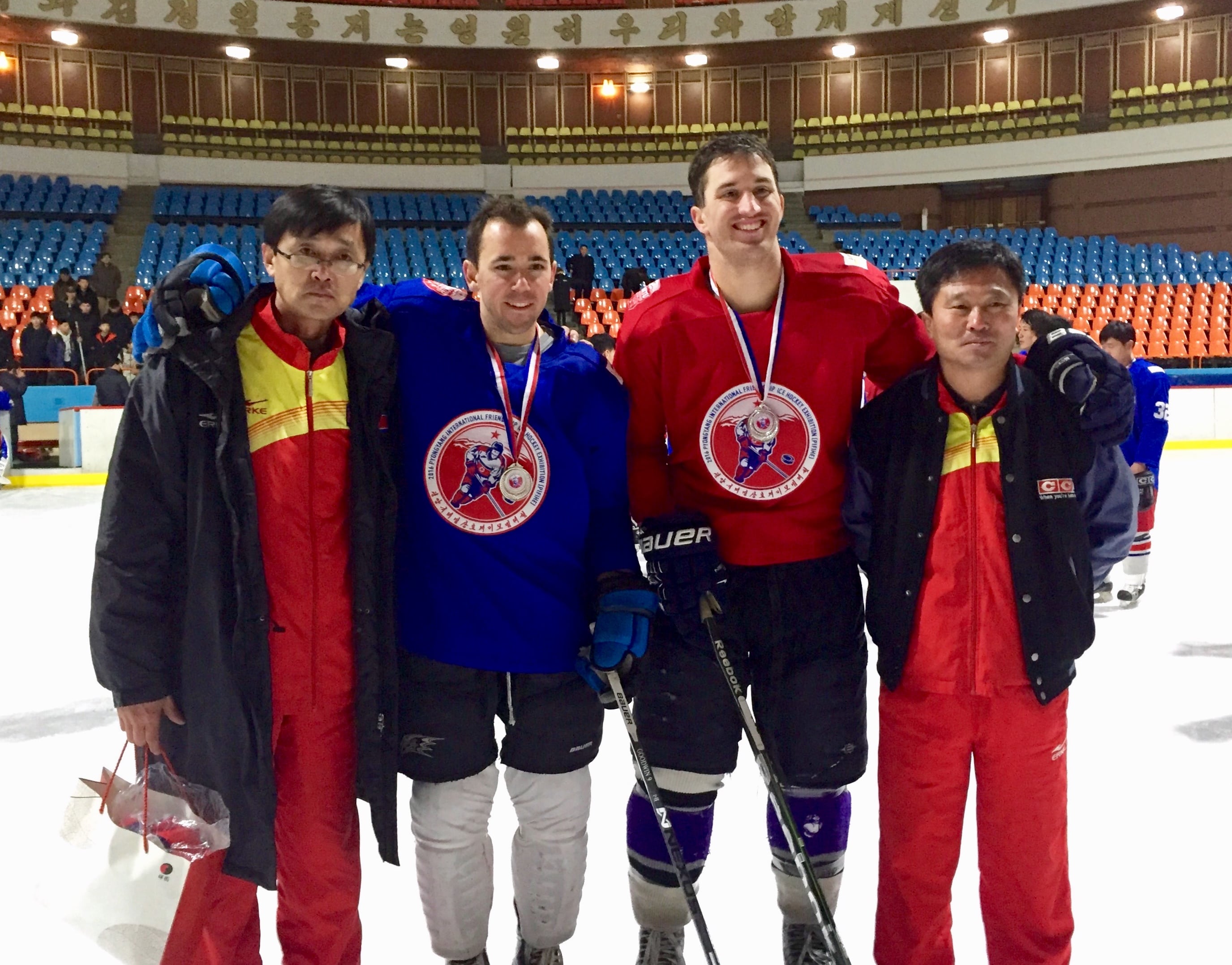 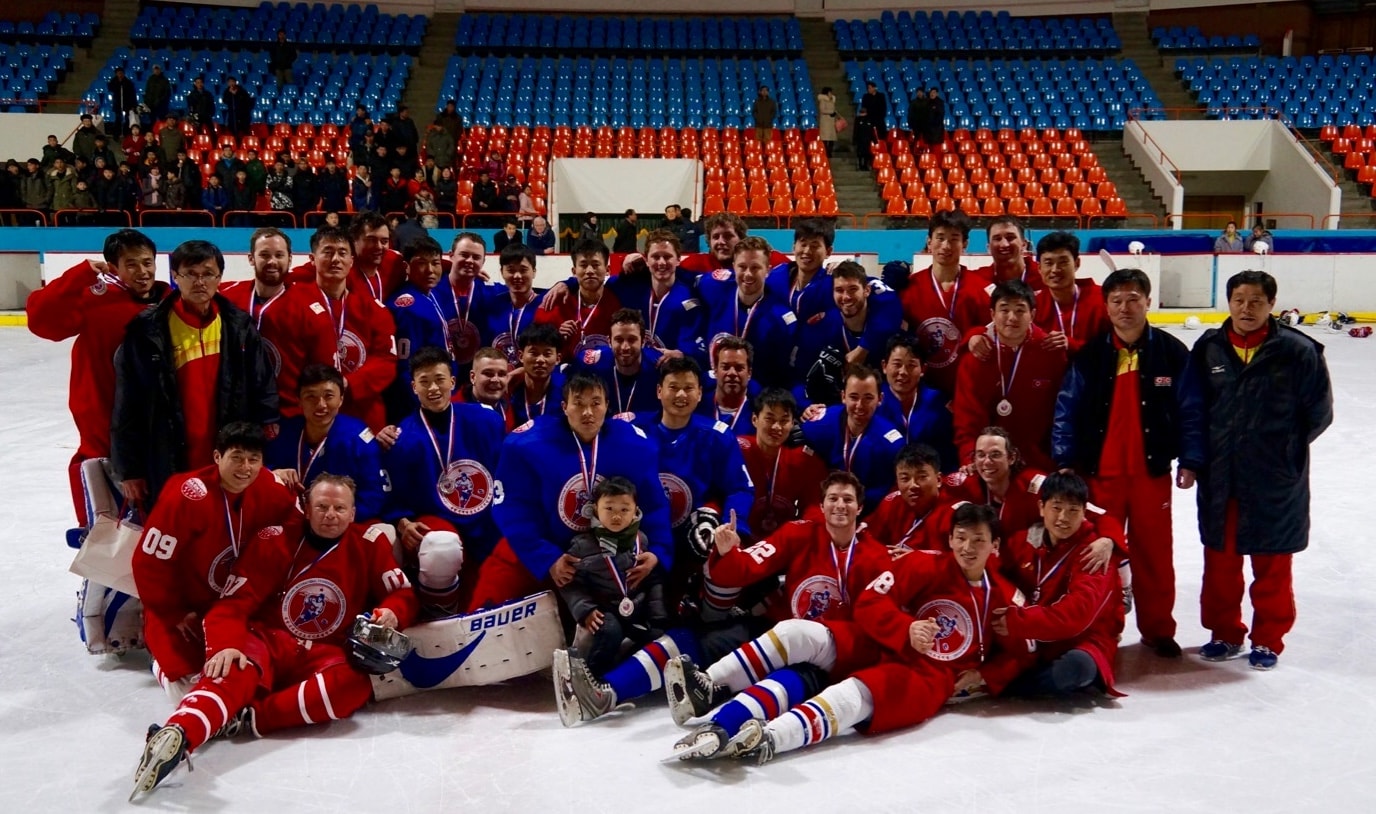 Away from the rink was equally unique and the source of several of my best travel memories. Touring North Korea requires a different frame of mind than most places. You have to roll with the punches and can’t always expect straightforward information or to clearly understand everything you encounter.

We spent the better part of two days exploring Pyongyang, the DPRK capital city and (only) administrative center. It becomes instantly clear that the country’s leaders are a big deal. They are the only deal. There are an estimated 34,000 statues of Kim Il-Sung throughout the country, not to mention the 20-meter (66-foot) marvel of he and his son, General Kim Jong-Il, named the Mansudae Grand Monument. These two men are the grandfather and father of current leader, Marshall Kim Jong-Un. 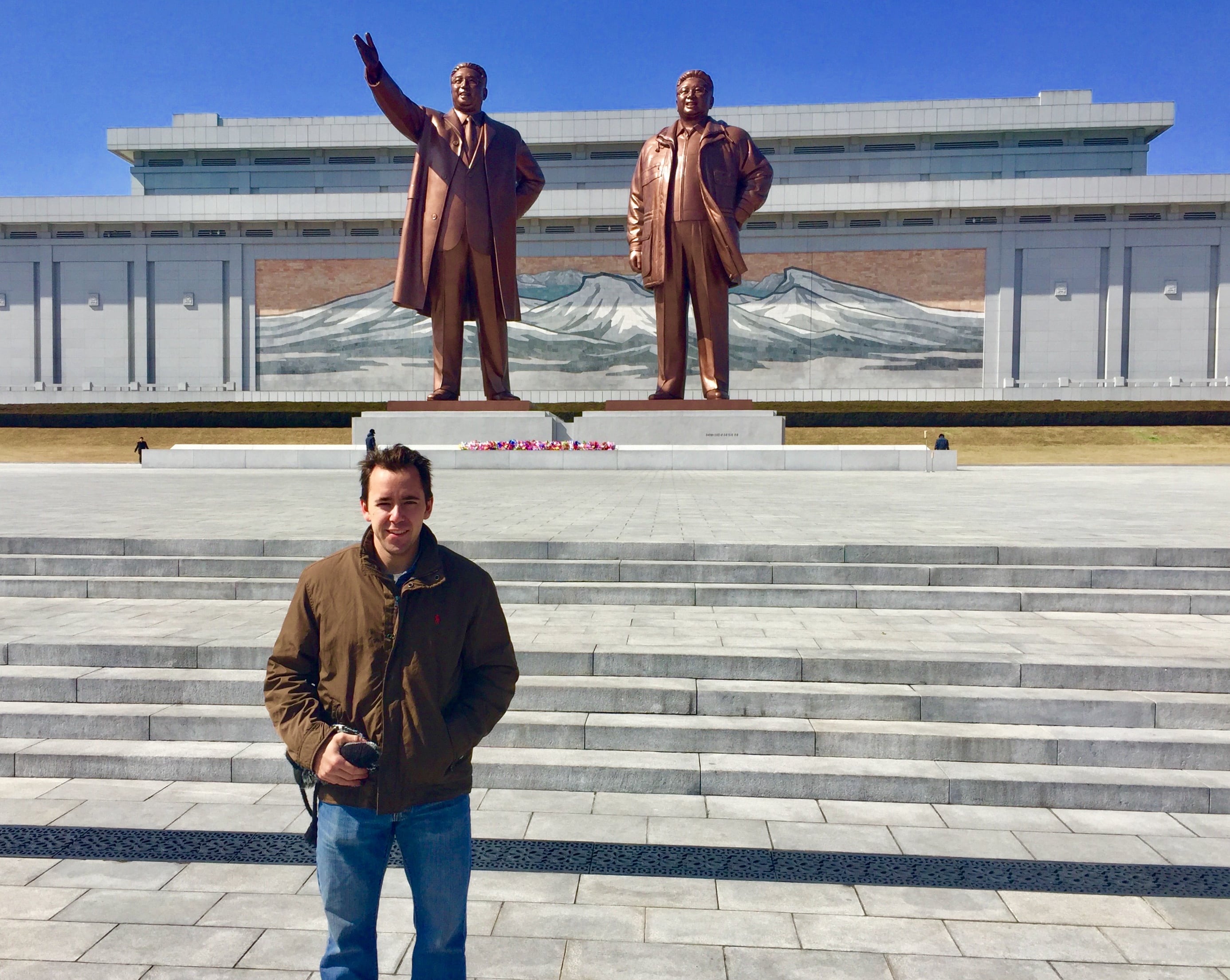 We spent a couple hours visiting the ‘Victorious War Museum’ under the guidance of a female military officer and museum guide. She was relatively attractive, professional, conversant in English and profound in her explanation of the ‘American Imperialists’ as the reason for a divided Korean peninsula. She later explained that during a Korean War battle, two (North) Korean soldiers fought off an American fighter jet, two tanks and a platoon of 150 enemy soldiers for an entire week with only hand pistols because they were under the wise leadership of President Kim Il-Sung. 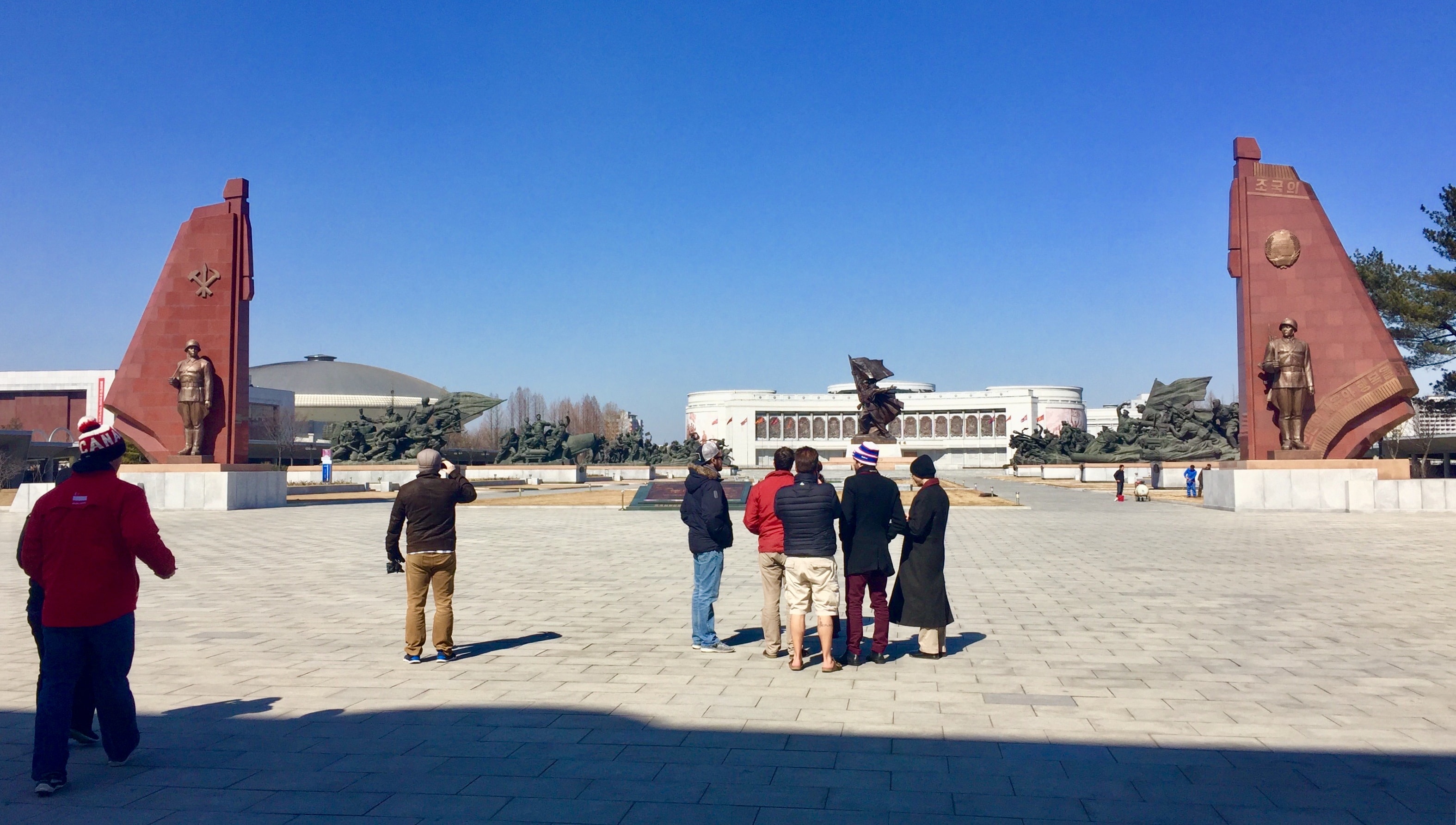 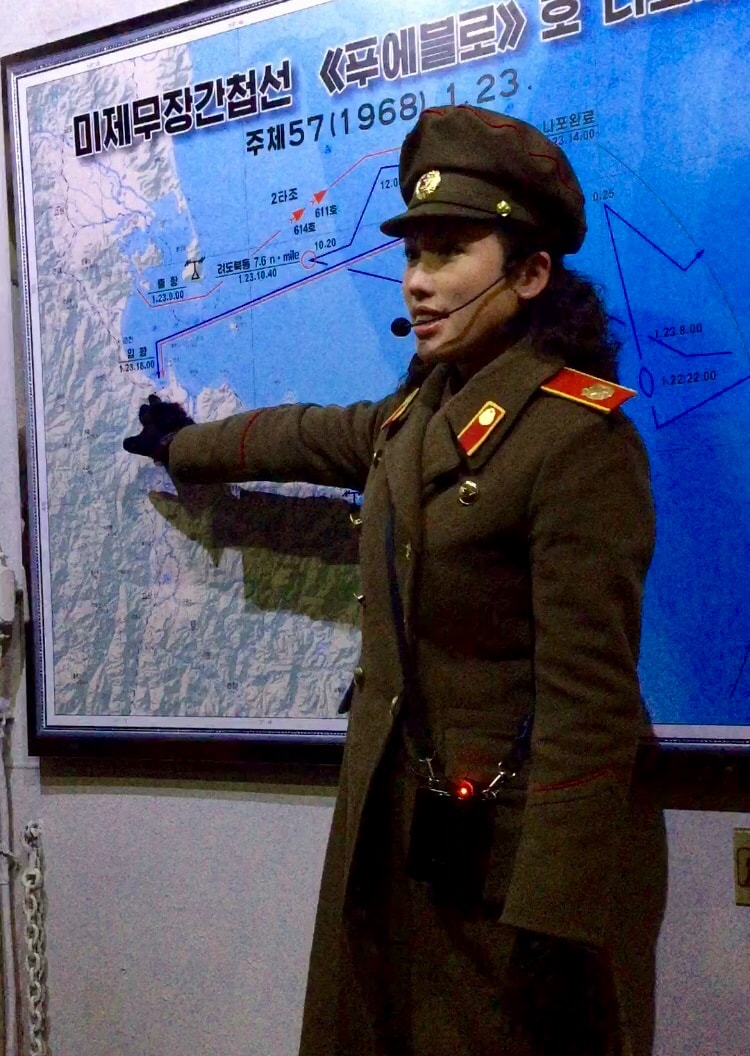 A few blocks up the road is the infamous Ryugyong ‘Rocket’ Hotel. The 105-story megastructure is iconic to the city. Given that construction began in 1987 and remains incomplete, we learned that it’s best to just not ask about the details. 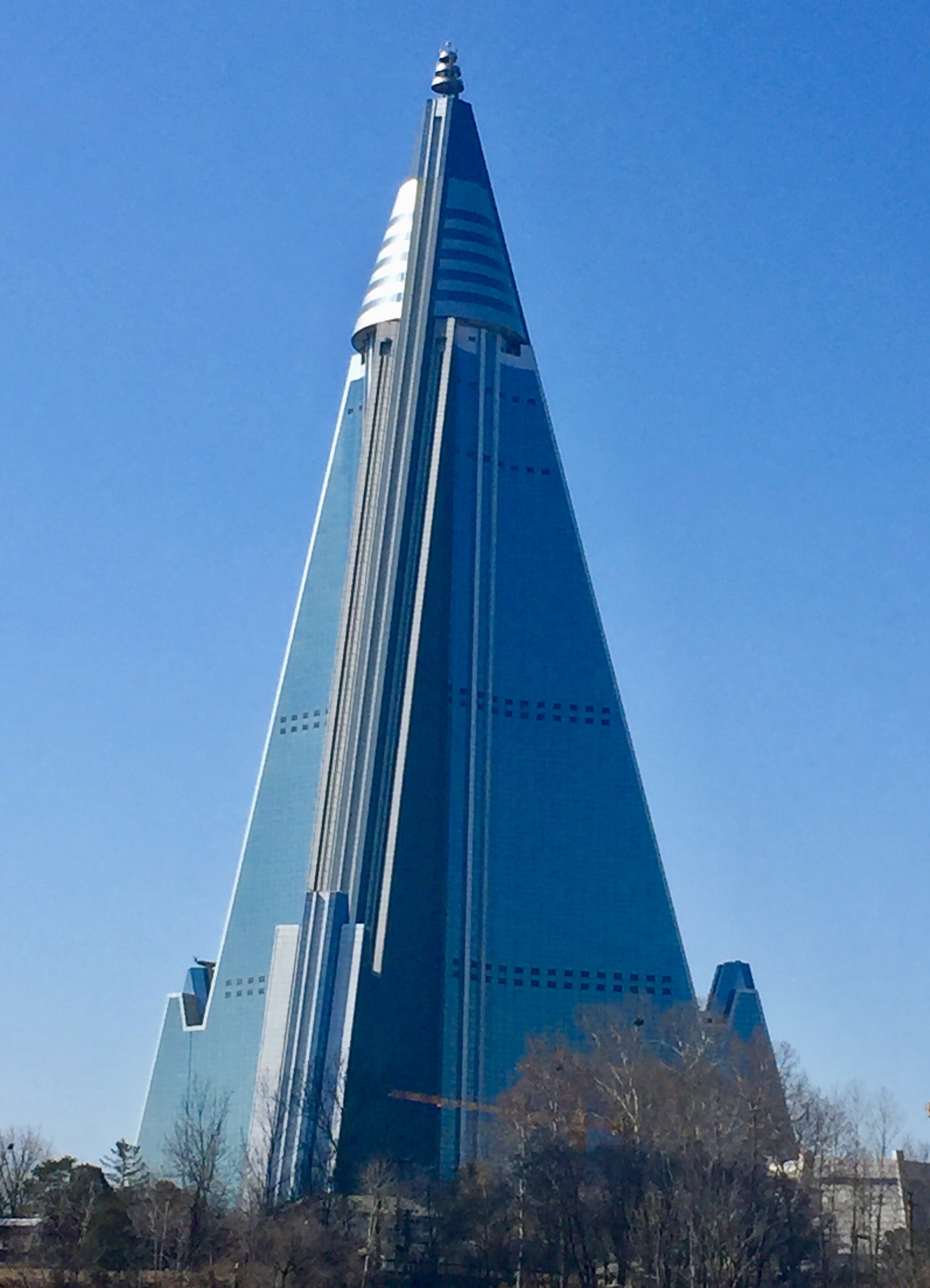 Other notable landmarks include the 60-meter (200-foot) Arch of Triumph commemorating DPRK’s independence from Japan, the Rungrado 1st of May Stadium which, with a capacity of 114,000, is the largest in the world and the Juche Tower which provides visitors with a fantastic panoramic view of the city. 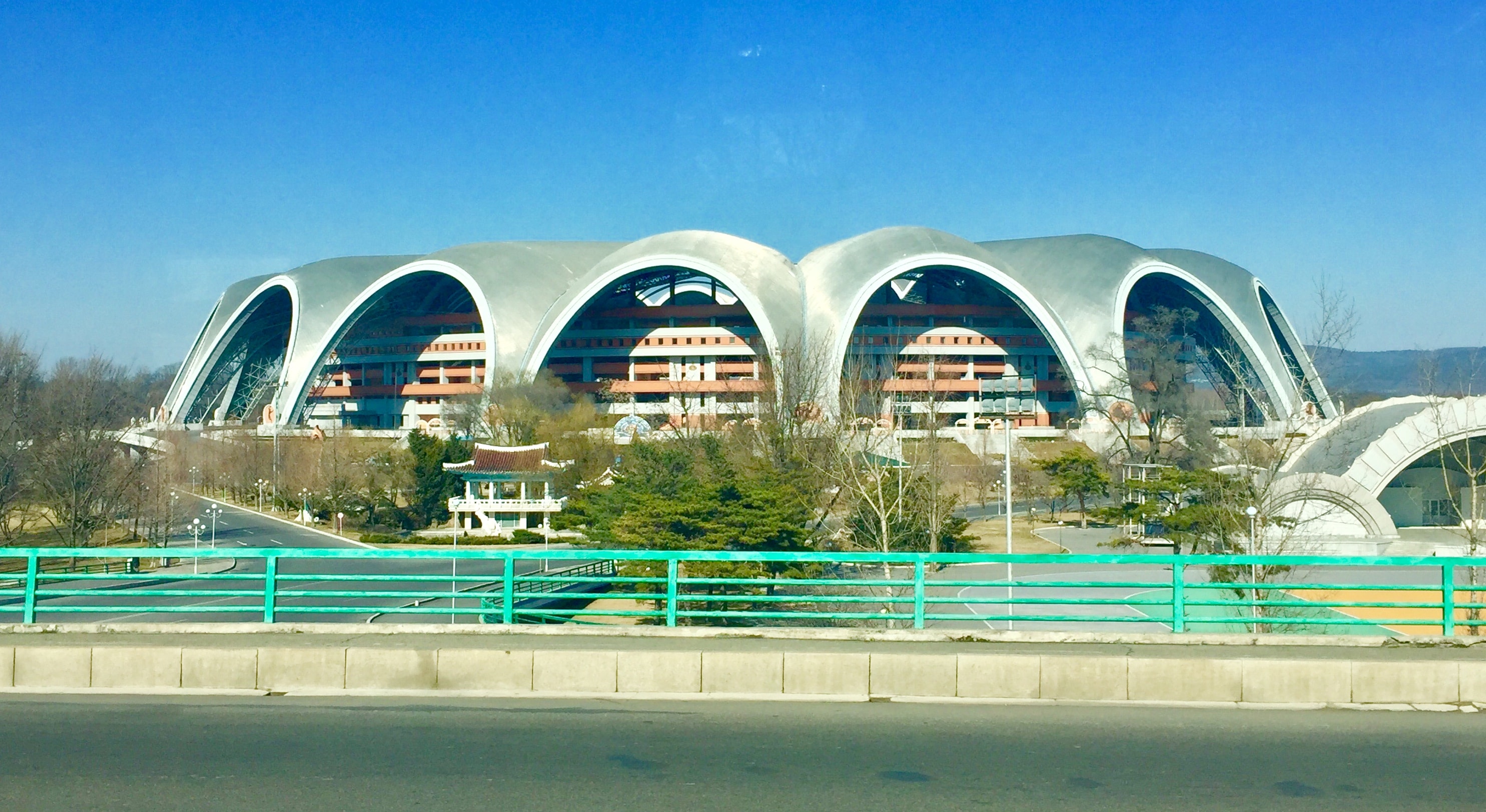 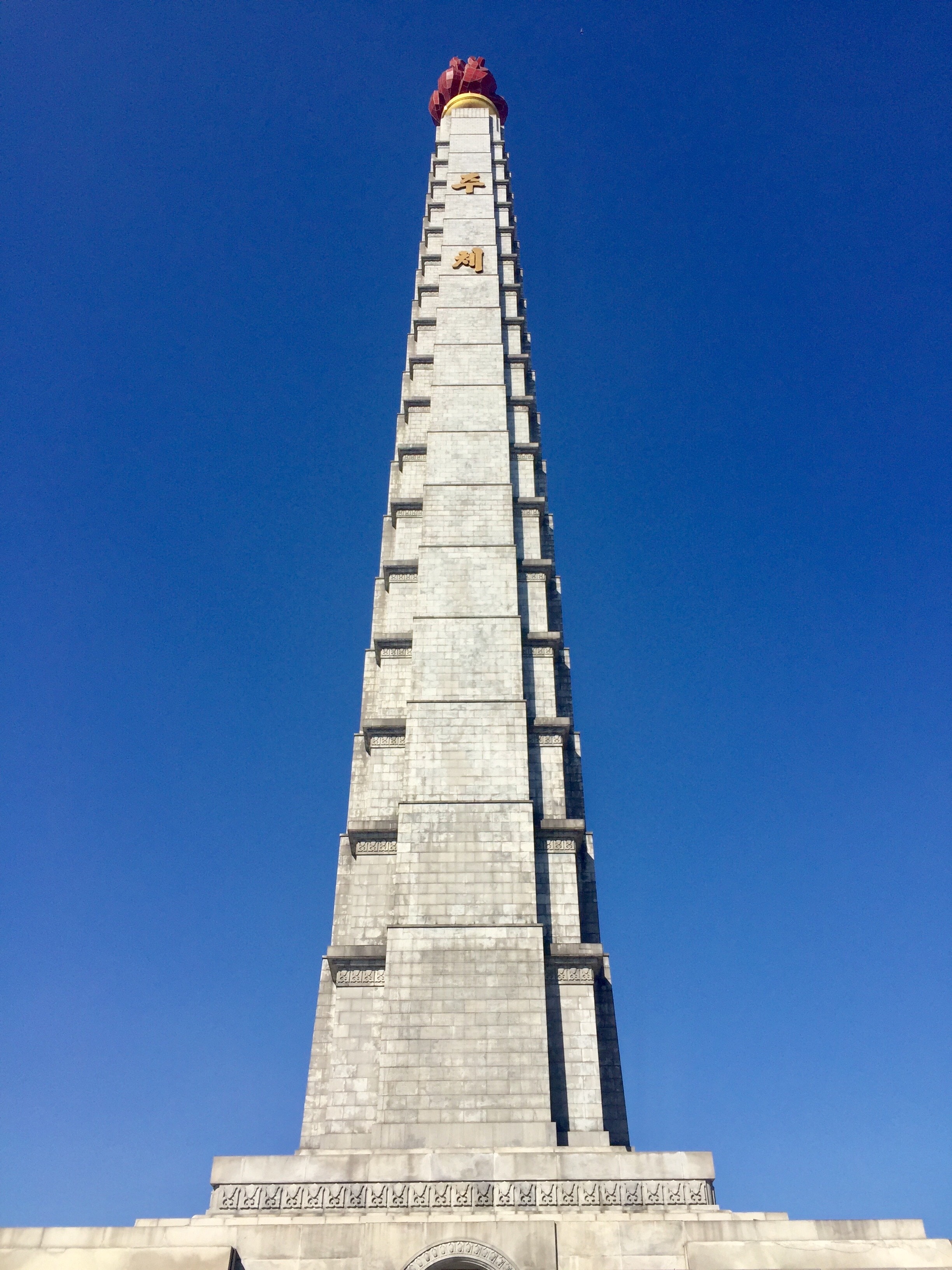 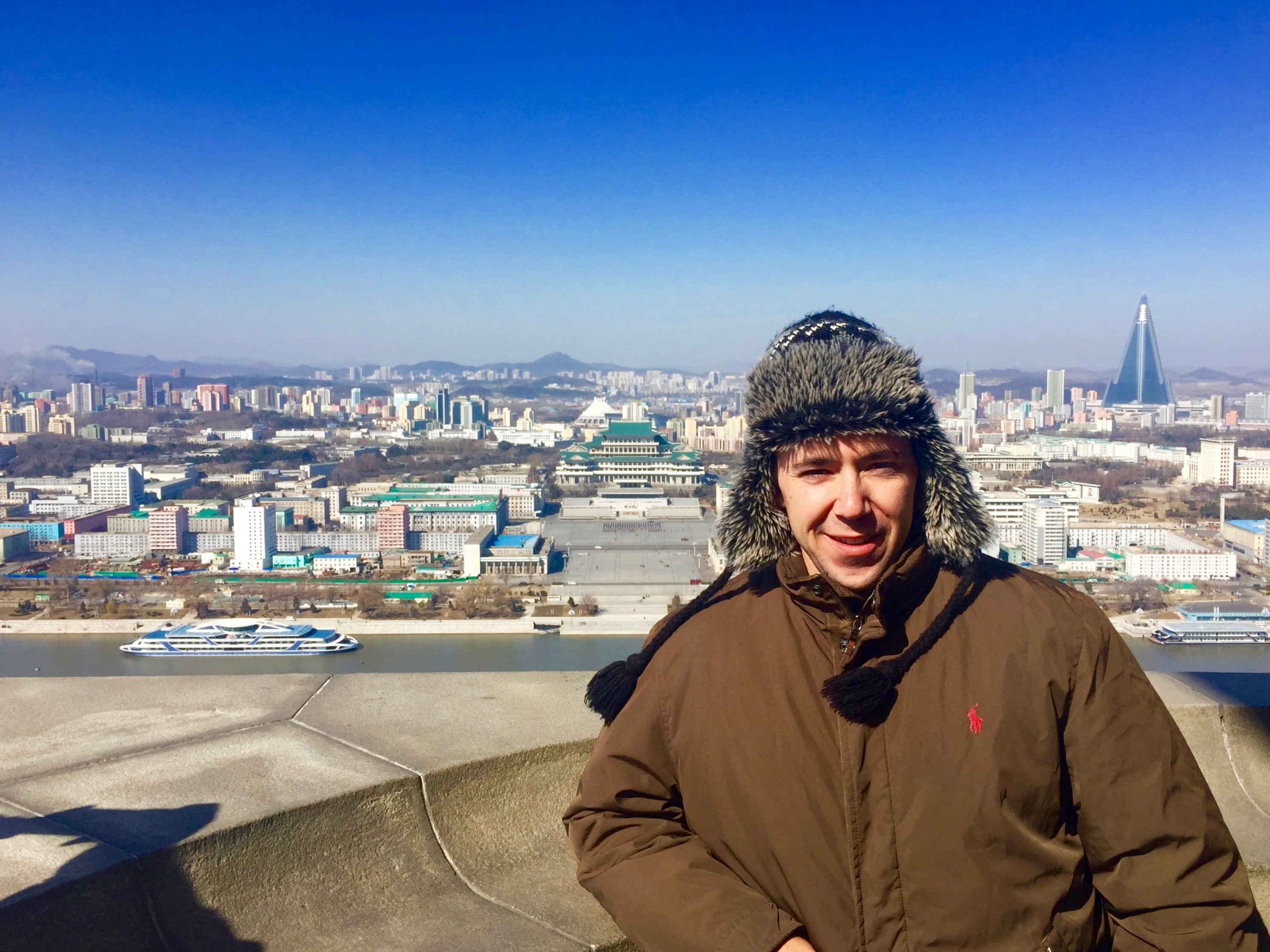 Between attractions, we had the opportunity to ride the Pyongyang Metro. At 110 meters (350 feet) deep, it is among the deepest in the world. So deep, in fact, that the stations are designed to double as bomb shelters. They are decorated with mosaics and stucco in the style of socialist realism, an appearance that reminded me of the Moscow Metro. 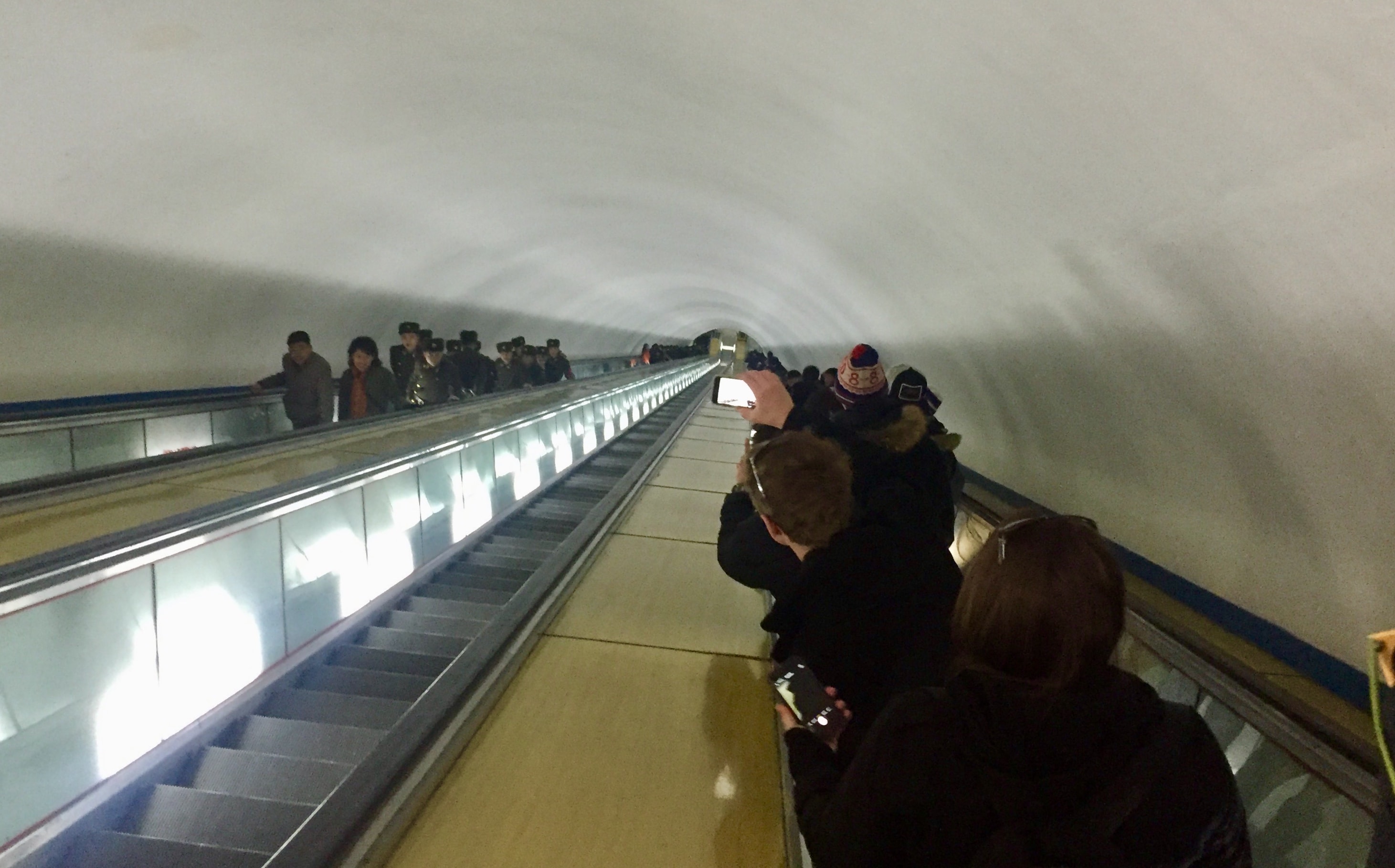 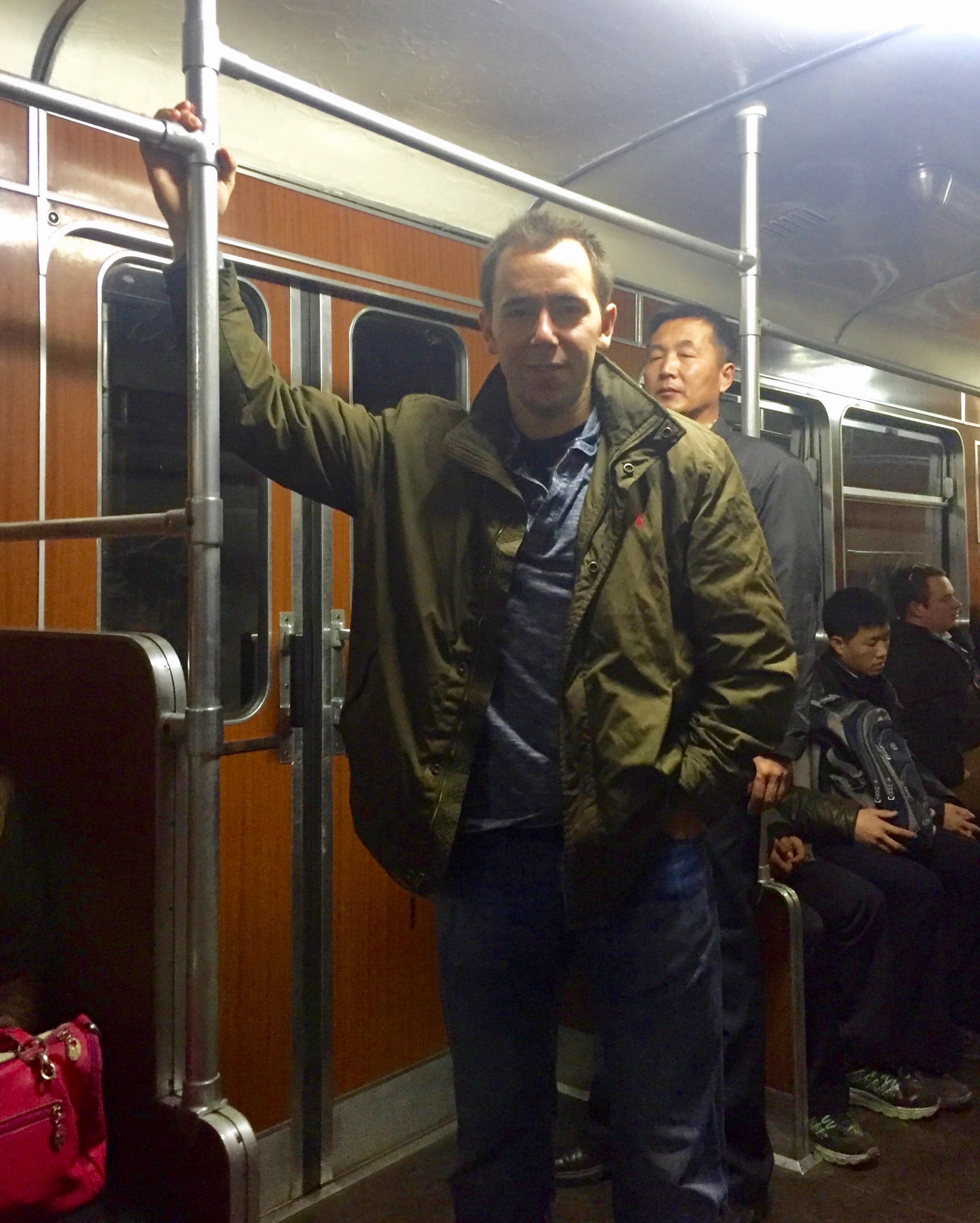 No visit to DPRK would be complete without experiencing Kim Il-Sung square, a huge area in the center of Pyongyang capable of accommodating more than 100,000 people at once. The square is of great cultural significance and routinely appears in both DPRK and worldwide media. Our visit was timely, allowing me to participate in a morning aerobics routine with hundreds of locals. Nearby, there are several opportunities to observe the well-known traffic woman. Pyongyang is home to very few traffic lights as most intersections are instead patrolled this way. 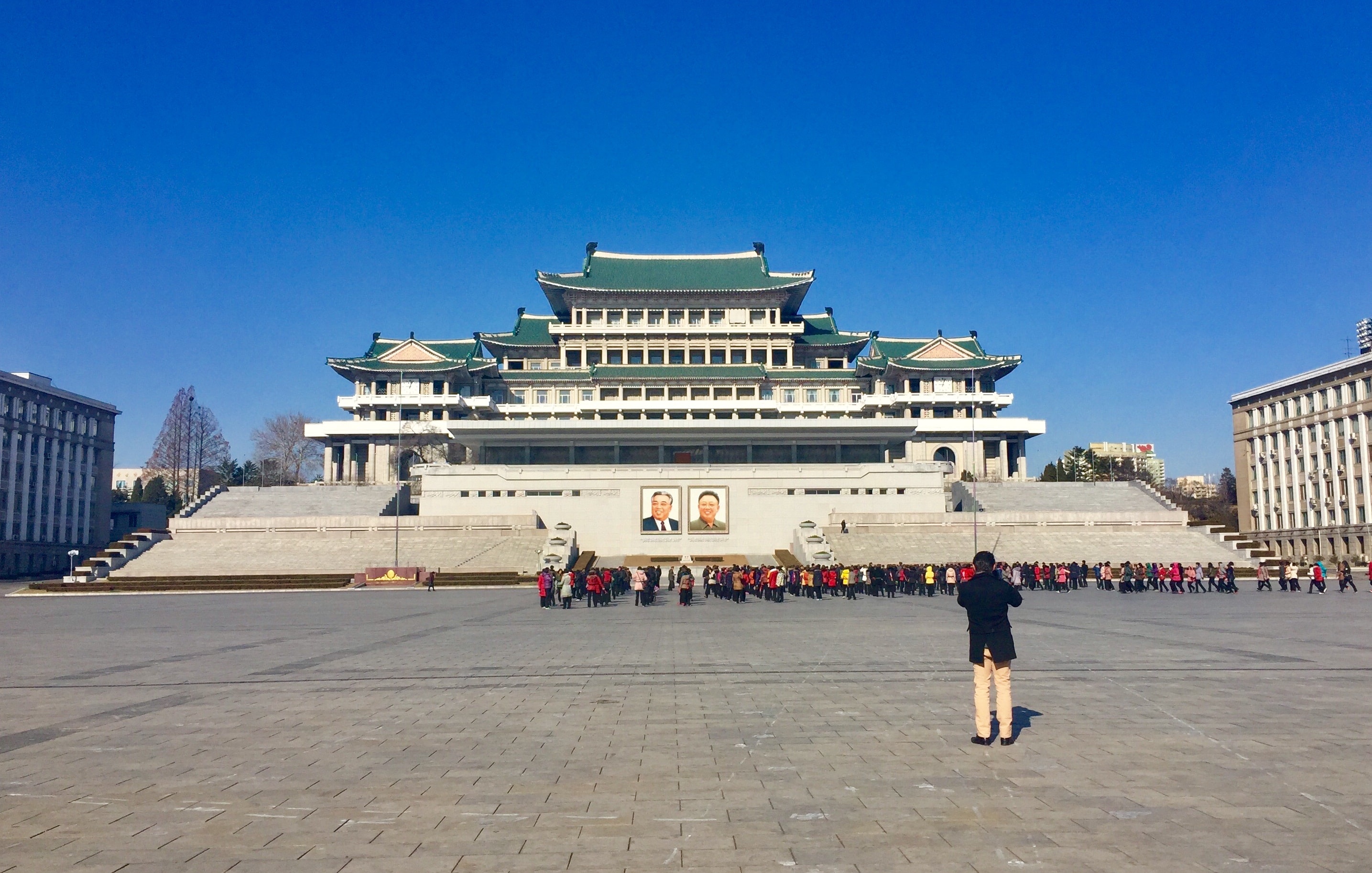 Our most significant trip outside of Pyongyang was the two-hour drive south to the Joint Security Area (JSA) of the Korean Demilitarized Zone (DMZ), the world’s most heavily-guarded national border. En route, the main highway was unexpectedly closed, something that caught Mr. and Mrs. Kim by surprise and forced us to divert from the usual tourist track to remote countryside. Other than when in the presence of military personnel, this was the only time we were asked to not take photos – we were seeing things that we were not supposed to see. The rural villages were as developing as any I’ve encountered, further solidifying our presumption that nearly all of the DPRK’s meaningful activity happens within Pyongyang.

Our DMZ tour lasted 90 minutes and was administered by a senior-ranking military officer. Much of the communicated information directly contradicted what I was told six weeks earlier when my sister and I visited the DMZ’s southern attractions on a day-trip from Seoul. While standing on the second-floor balcony of the Panmungak Pavilion, one of my buddies who lives in Seoul was able to switch on his phone and access South Korean phone data. He hot spotted me and, after sending out a few quick messages to friends, we enjoyed laughing about ‘that time we used the internet in North Korea.’ Our tour ended in a gift shop and I found it ironic that, immediately following 90 minutes of harsh USA bashing, all items in the store were to be paid for in US dollars. 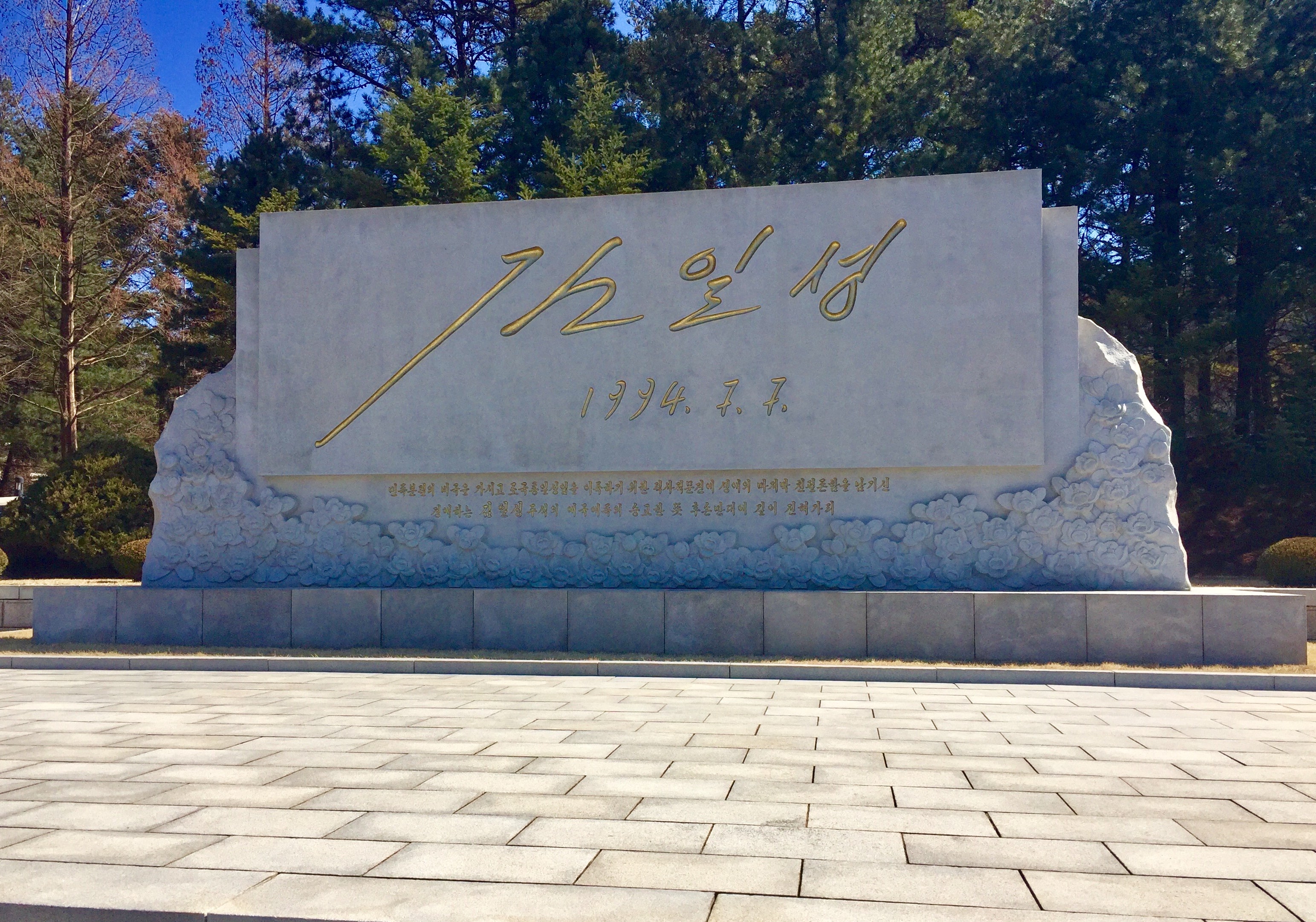 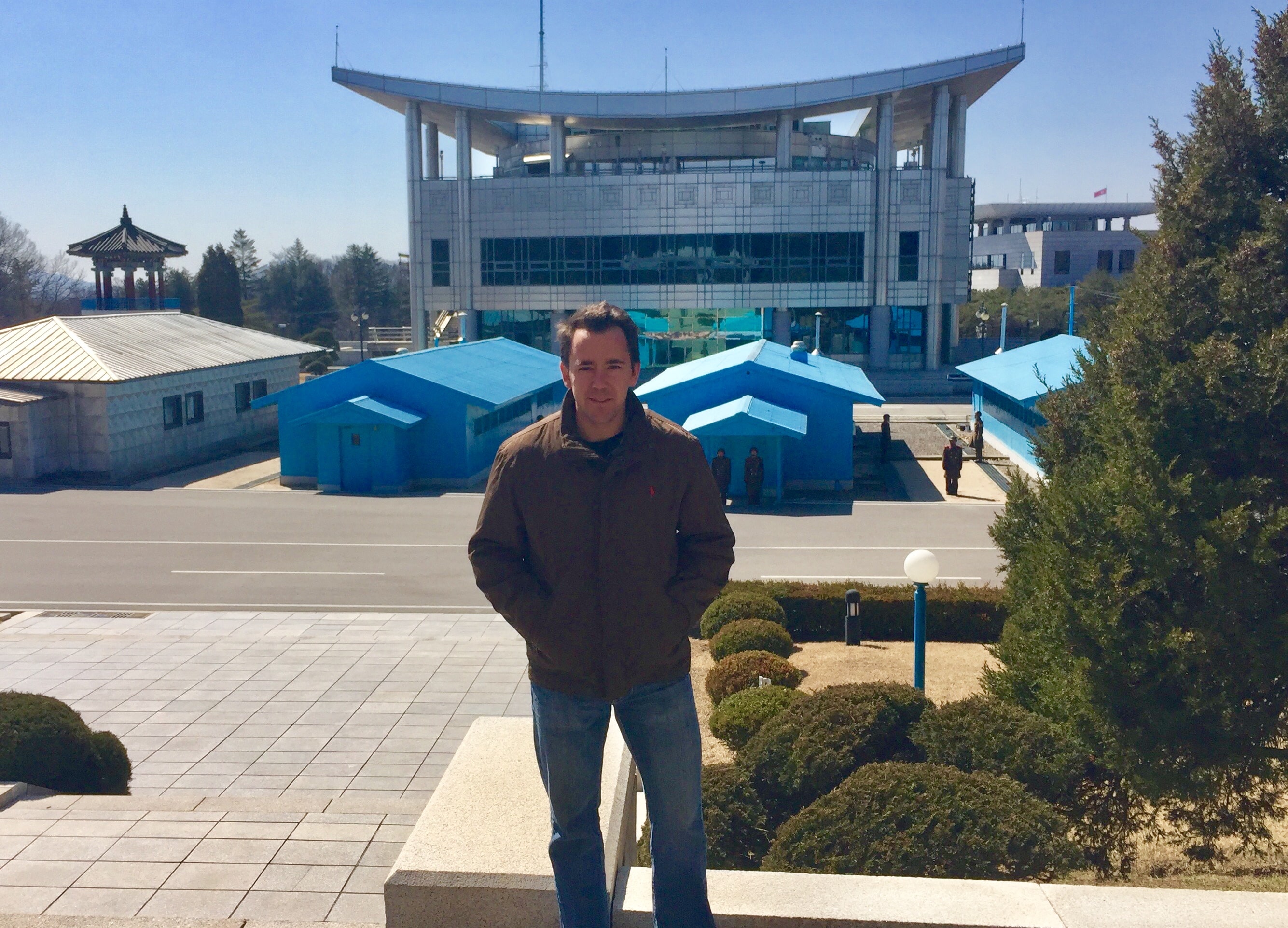 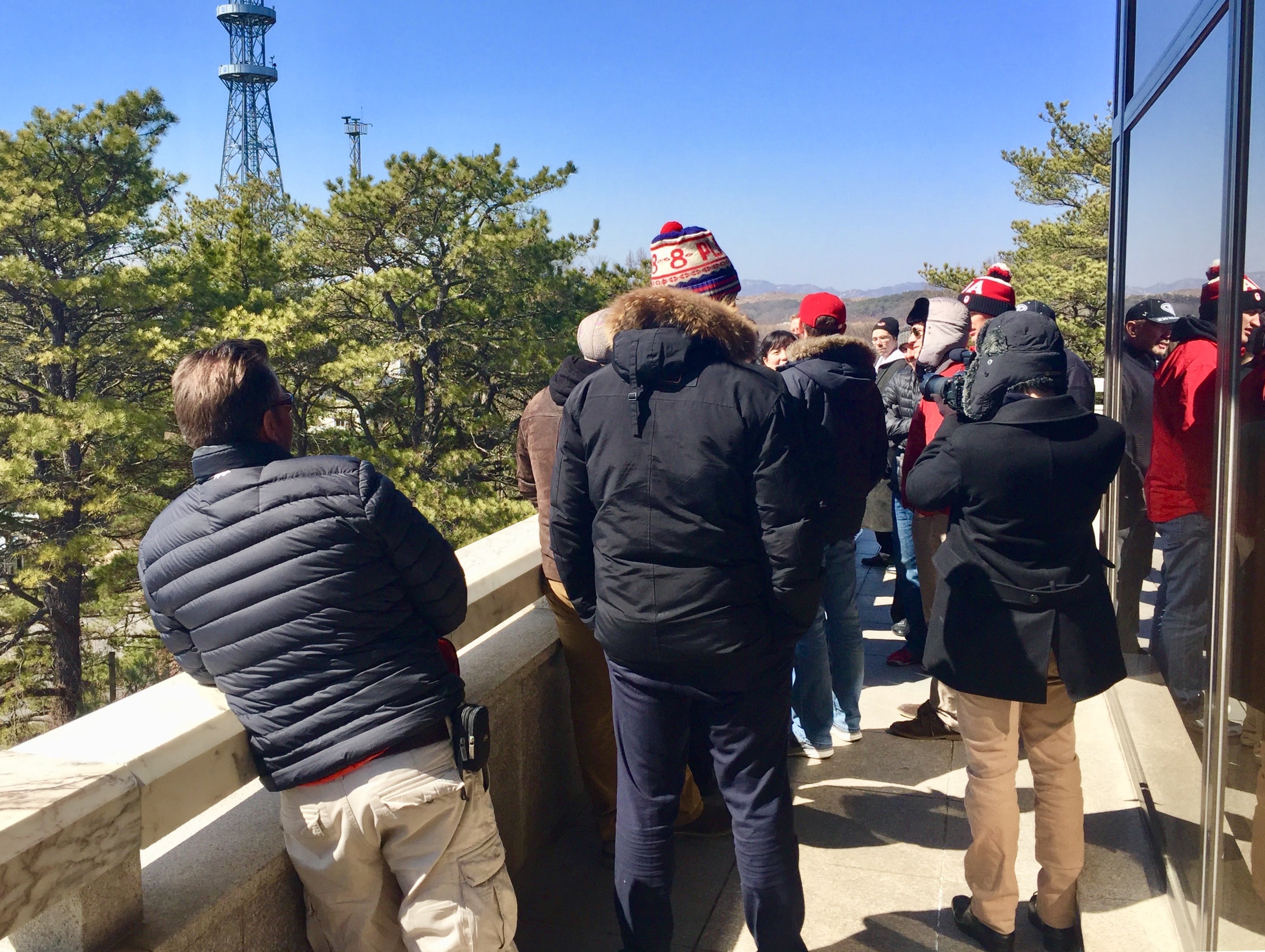 Given the long days full of hockey and sightseeing, quality meals were key. Of course, Korean’s are no cuisine amateurs, with BBQ and kimchi as culinary staples. All of our meals were pre-arranged, delicious and served by friendly restaurant staff. Dinner was often followed by dancing and singing karaoke with local waitresses. We learned that ‘Pangapsumnida,’ or 반갑습니다, translates to ‘nice to meet you’ and is the DPRK’s most famous karaoke song. It was stuck in my head for weeks following our trip. While sitting around the table on one of the last nights, a couple of us managed to convince Mrs. Kim to give us a very quick glimpse of ‘North Korean Wikipedia’ on her phone. I can only imagine what digging further into that ‘database’ would uncover. 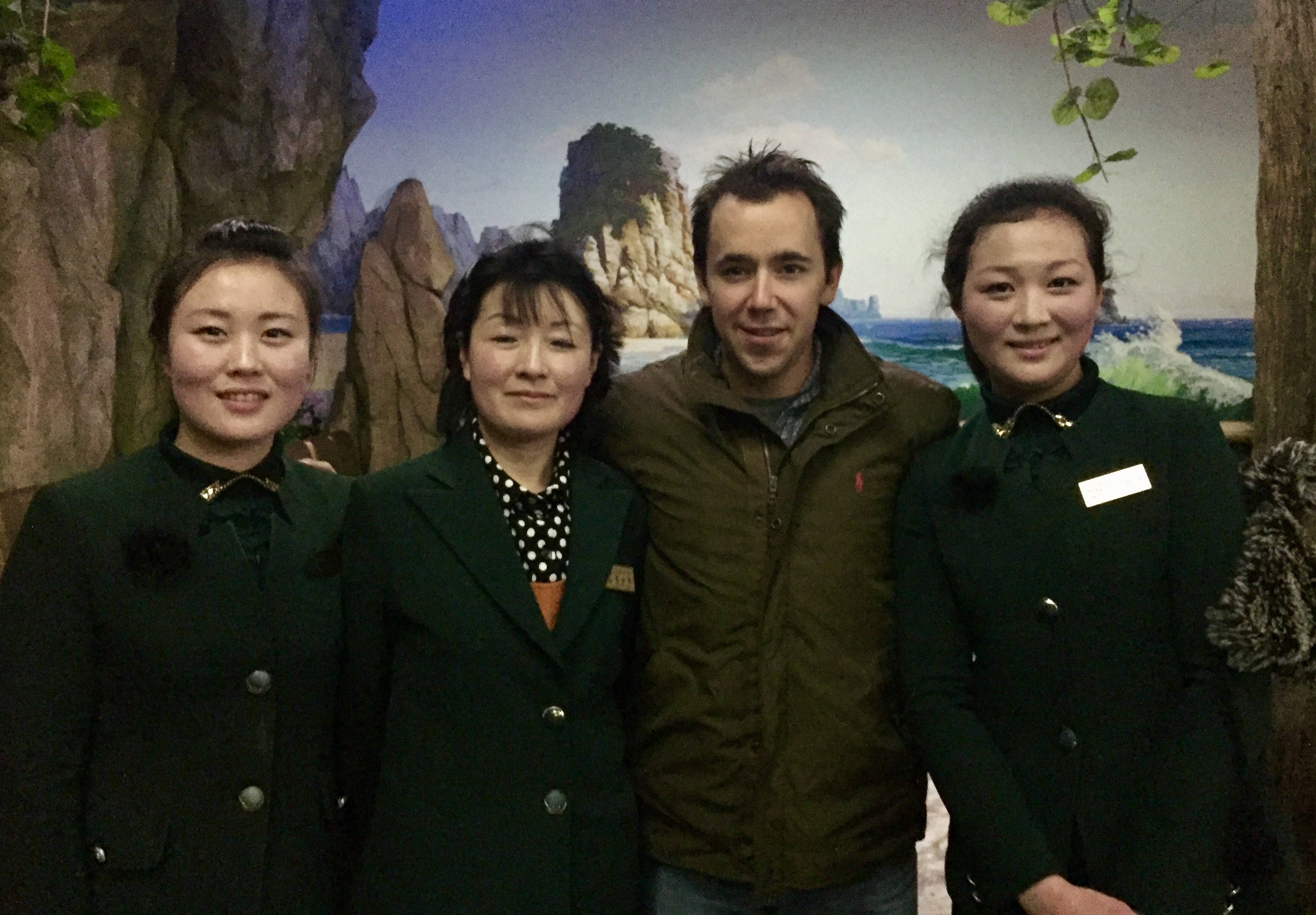 Before leaving the country, I found a few minutes to sneak down to the basement of the hotel for a haircut. This was the only time during the week I left our group. Despite the displayed facial expression (I caught her at an awkward moment), the female barber was friendly and did presentable work. Thankfully, the next morning we had no issues at the airport. Our Air Koryo Tupolev Tu-204-300 departed on schedule and returned us to Beijing as safely and comfortably as you would expect from any airline. 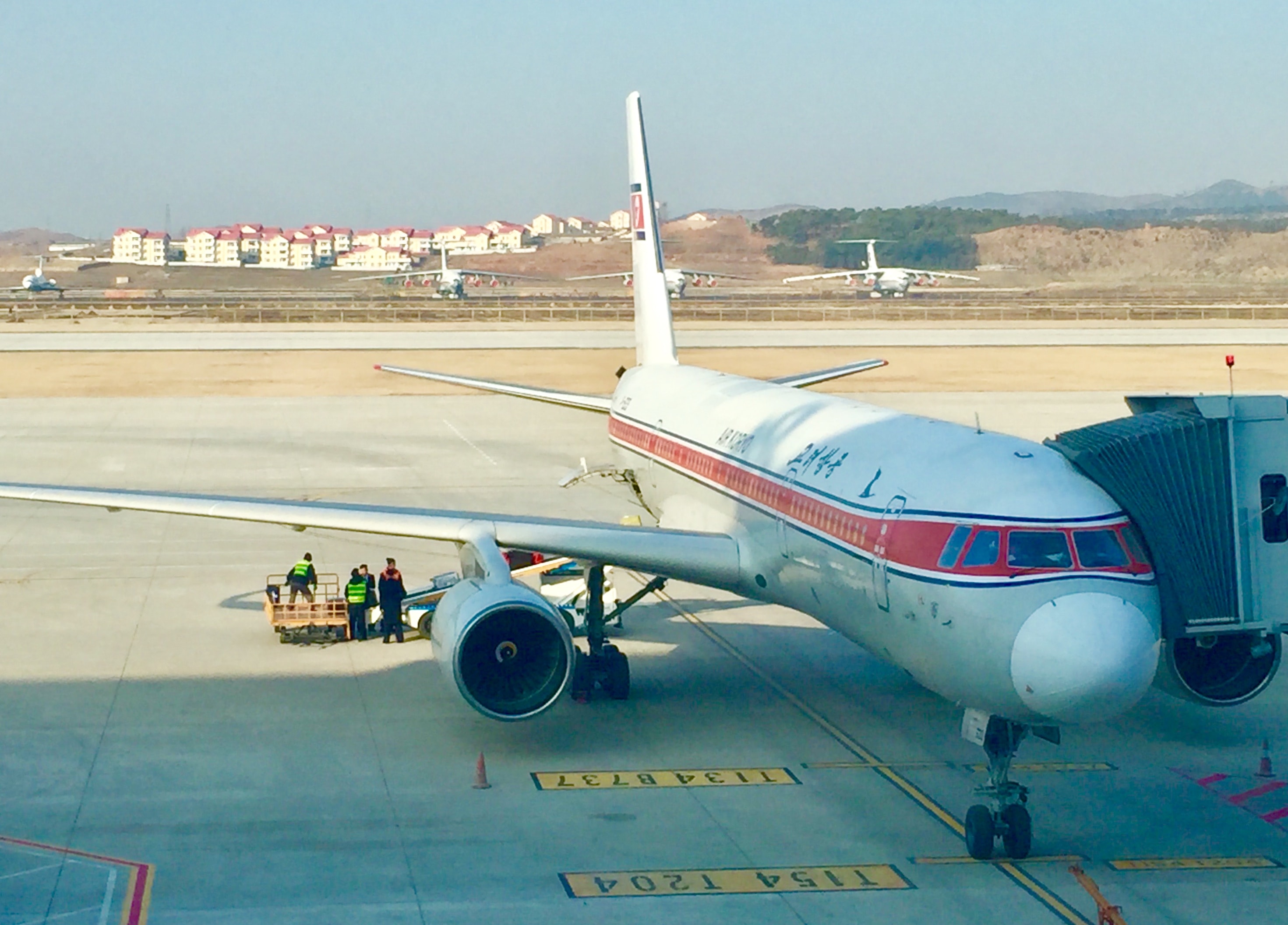 As you can probably imagine, this trip remains among my most unique memories. Unfortunately, what we saw during our visit was almost certainly an inaccurate and incomplete representation of average DPRK life. It would be naive to think that every detail of our trip wasn’t part of a predetermined tourist track in an attempt to shield visitors from the negative by-products of the country’s rigid leadership. That said, I couldn’t be more grateful for what I did observe and learn, especially given that the entire event was based around the opportunity to play and grow the game of hockey in a non-traditional market.

As I’ve mentioned to many people when recapping this trip, if you travel to DPRK and follow the rules, it’s unlikely you will have any problems but instead be rewarded with a terrific experience. It seemed elementary at the time, but respecting the leaders and behaving as if you’re at your grandmothers’ dinner table truly proved to be a winning recipe.

Would you go to North Korea? If you’ve been, what is your best memory or story?